How to Play Nami TF Shellfolk

Today we’re taking a look at a new deck that’s been making waves on the ladder. That’s right, Nami is back!

Alongside her fish friends from Bandle City, she’s ready to cause some trouble.

There’s a ton of wiggle room with this deck, so let’s dive in and explore its power! 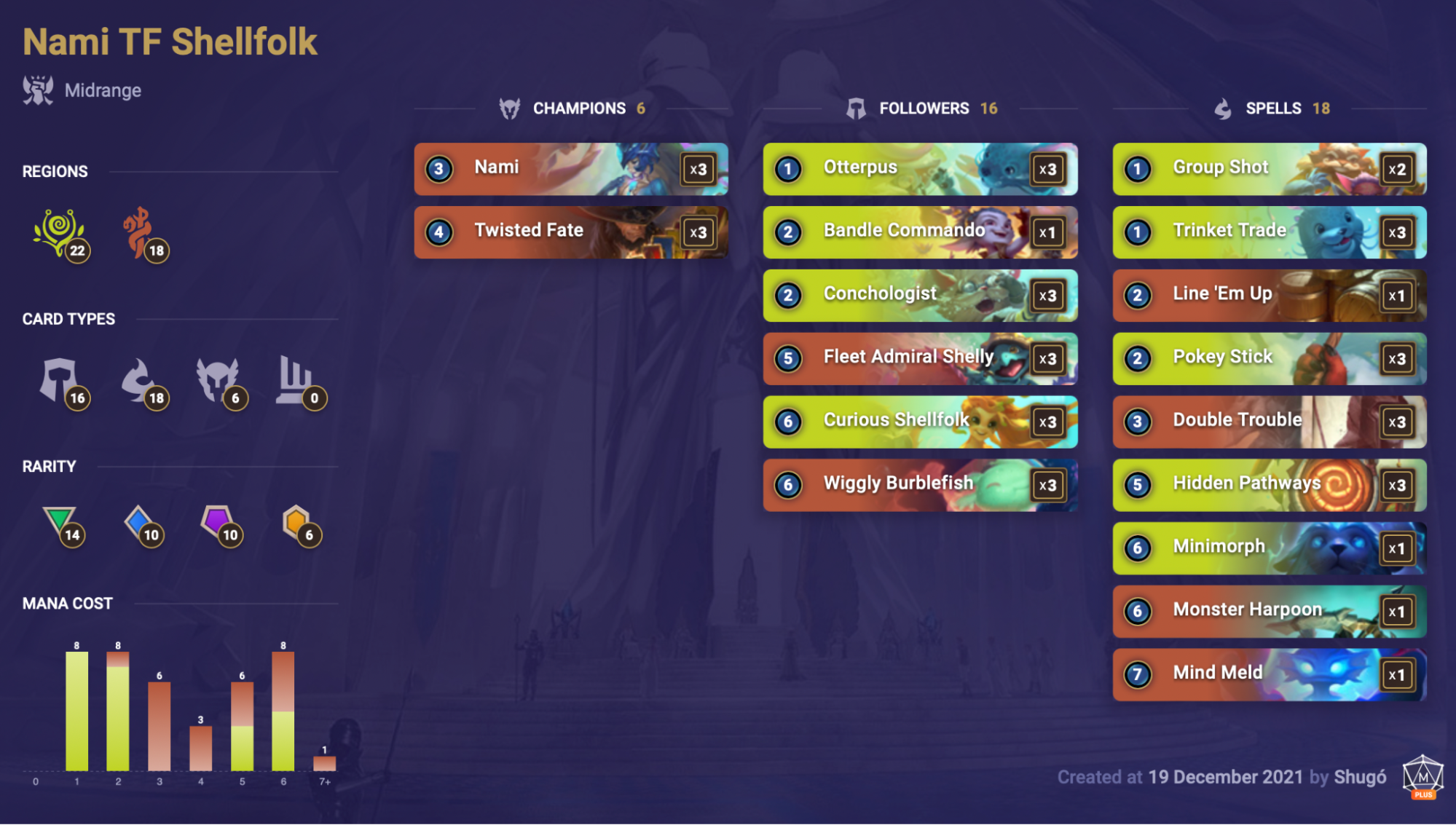 Nami TF Shellfolk plays quite differently from its predecessors. Nami Zoe was combo-centric and focused its plan around buffing Sparklefly. Fizz TF packed lots of cheap card-draw to create consistent and explosive turns.

Both of these were built upon flipping their champions as soon as possible, and in their pre-nerf days, they got away with it. This time around we’re playing more fair.

Instead of prioritizing one strategy, Nami TF Shellfolk dips its toes halfway into each. It’s a bit of a mish-mash of cards, as not everything has perfect synergy together.

However, just like other Shellfolk decks, this deck is full of value and can adapt to almost any situation. Between Nami, Twisted Fate, and Curious Shellfolk, you’ll always have multiple lines to consider.

Figuring out the best path to victory can be a challenge, but if you play your cards right, you’ll be rewarded!

We have three core win conditions with Nami, Twisted Fate, and Curious Shellfolk. Fleet Admiral Shelly often functions as our fourth but is best backed up by our primary three. We’ll need to evaluate accordingly and choose our best win condition for the matchup.

Our early units are always good since each one generates additional value. Double Trouble is essential to help reliably progress Nami.

During the early game, we want to focus on the proper use of our mana. Since Nami requires us to gain spell mana to level up, it’s important to manage our spending carefully.

However, unlike the old Nami decks, we’re not all-in on flipping her. So don’t be afraid to play our cards when they can keep us from falling behind.

When holding an Otterpus on turn one, it’s important to take a moment to consider what to do. Instead of immediately summoning our 1-drop, consider whether we could make better use of its Attune trigger later. After all, passing the first two turns guarantees us ⅜ spell mana.

Playing Otterpus will still do the same, but would have the extra Attune help trigger Nami when we normally couldn’t? It’s worth asking that question. 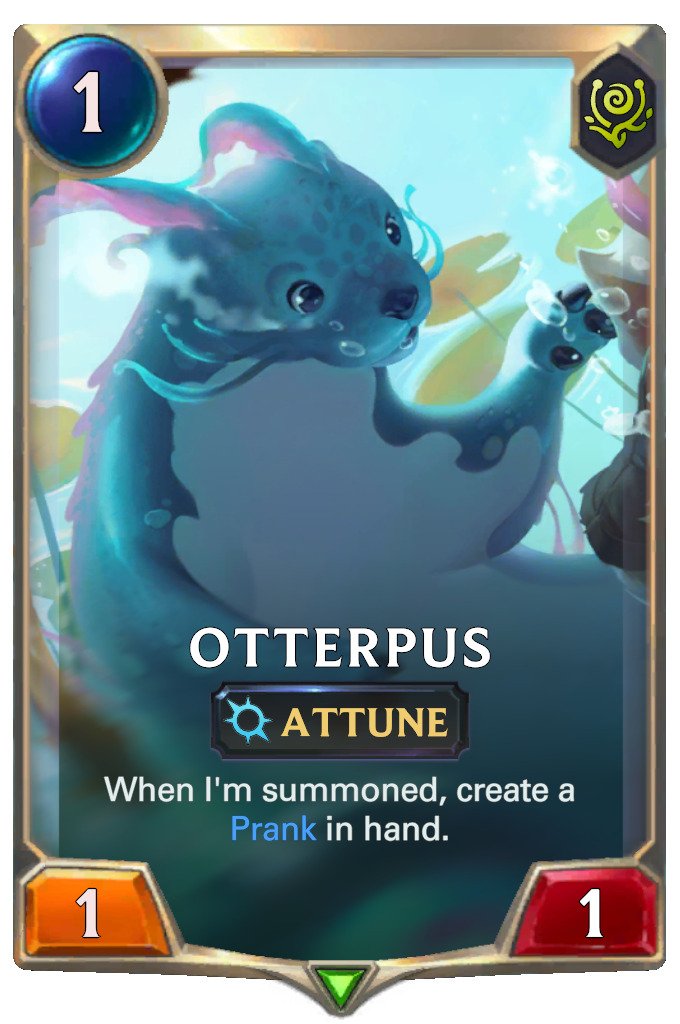 If you’ve got priority, it’s often best to just pass. If your opponent plays a 2|1, then of course drop the Otterpus in response. The last case to consider is when you’re holding Curious Shellfolk in hand. When setting up for Shellfolk it’s best to generate our Pranks beforehand.

This allows the opponent as little response time as possible. If we have to waste actions summoning Otterpus post-Shellfolk, our opponent has a far better window of opportunity. So if you foresee yourself lacking time to play Otterpus on turns 2-5, just play it immediately.

Play for tempo while assembling pieces for the mid game. Our real power comes from all the buffs and crazy value engines. However, due to our lack of protection, we need to be cautious when playing our threats. It’s okay if they get removed, but put yourself in a position where you can get at least one or two triggers in response.

Trinket Trade is an extremely valuable tool for the deck and should be saved as a combo piece whenever possible. Always keep mana open for Trinket Trade on the turn you drop Shellfolk. This nearly guarantees at least some value, unless against the likes of Hush and Minimorph. The other use is alongside Nami and Shelly to cheaply bolster our board.

It can be difficult to hold up multiple spells on the turns we summon them, and Trinket Trade can count as two! 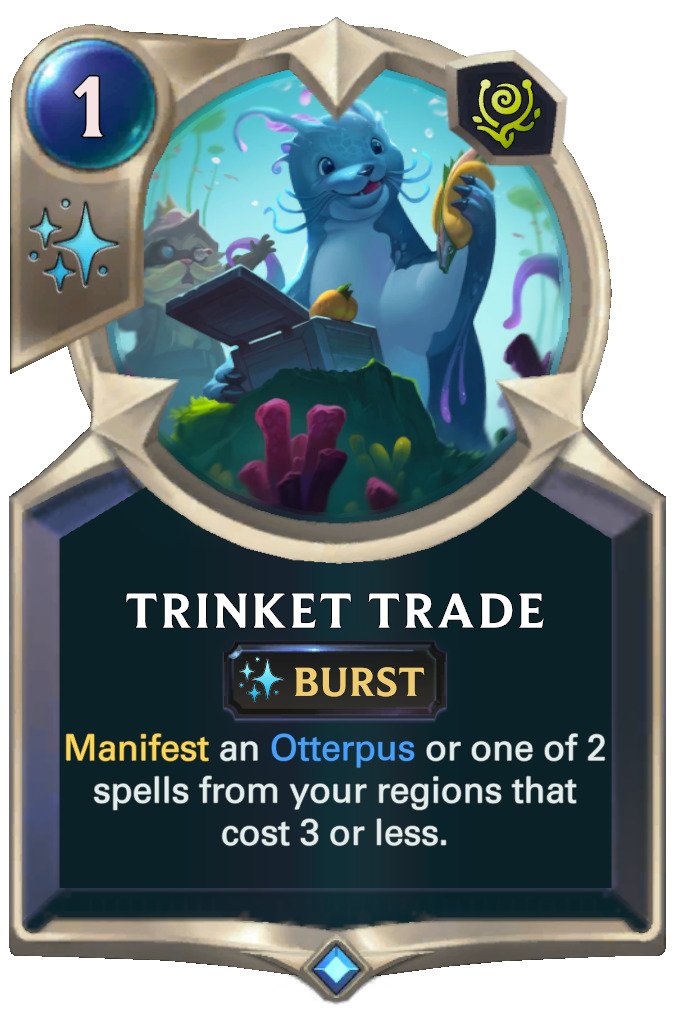 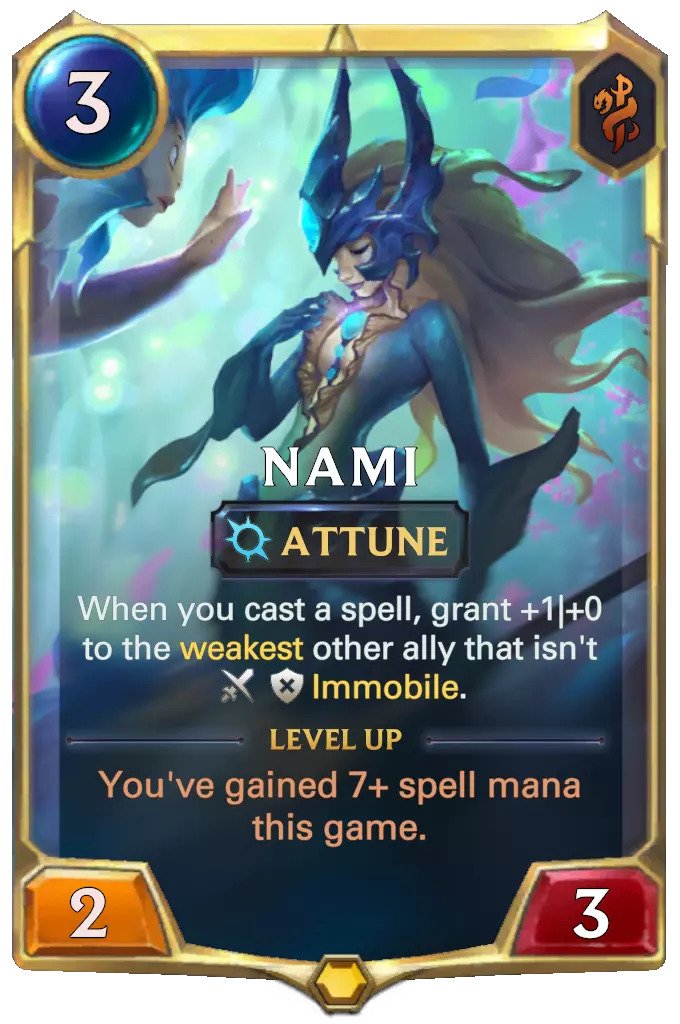 Twisted Fate plays more of a supporting role for the deck. His tri-card flexibility helps a lot while still threatening to level up if unanswered. Hidden Pathways has excellent synergy, plus there’s always more draw with Pokey Stick and Pick a Card.

However, outside of a manifested Stress Defense or Nami/Shelly buffs, we don’t have any ways to protect him. So be sure not to go all-in on TF unless the time is right.

Whether you end the game with a massively buffed Nami/Shelly board, a flipped Twisted Fate, or an absurd Curious Shellfolk hand, you’ll realize the options are almost infinite. Each game will play a bit differently, but ultimately come down to one of the three core win conditions.

Depending on the meta you’re experiencing, some worthwhile tech choices can be made. For the most part, the deck’s flexible spots are its 1-of’s. Although I could see trimming Group Shot depending on how things shift.

Marai Warden: This card is commonly seen as a 2-of in the deck, but can be undesirable in some matchups. It’s not great versus the mirror as 2|1’s trade poorly into Otterpus and leaves you extra vulnerable to Twisted Fate. However, it’s great versus aggro and can lead to more aggressive play patterns alongside Double Trouble. 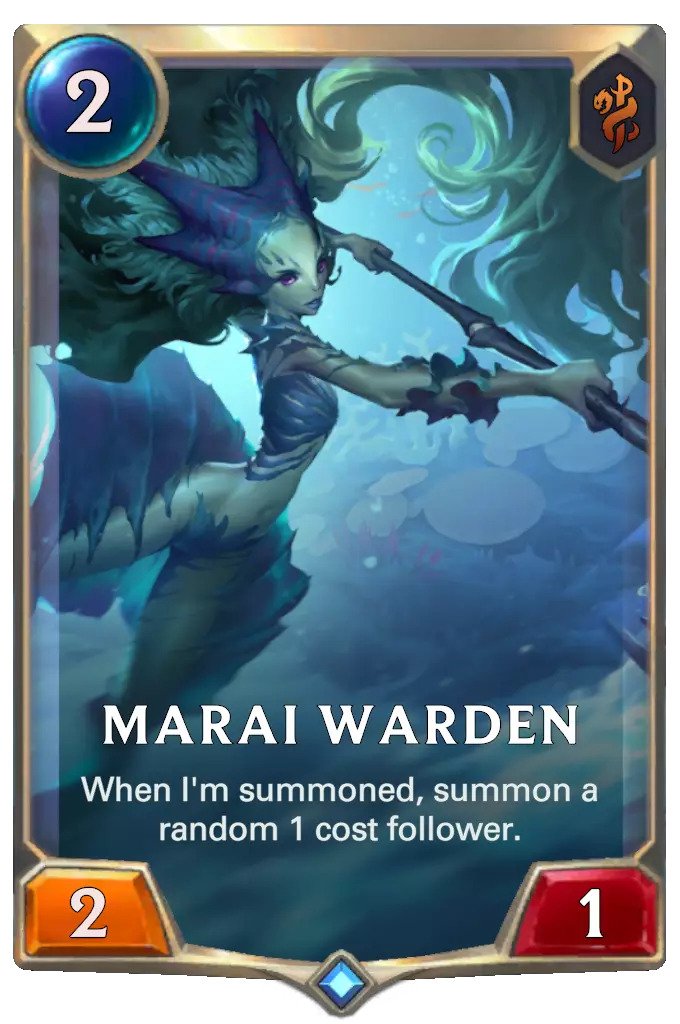 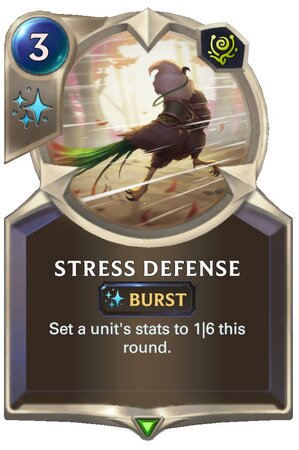 Minimorph #2: This is a very important card in Shellfolk mirrors, so having a second copy could help in your favor. Also deals with those pesky Wounded Whiteflames! 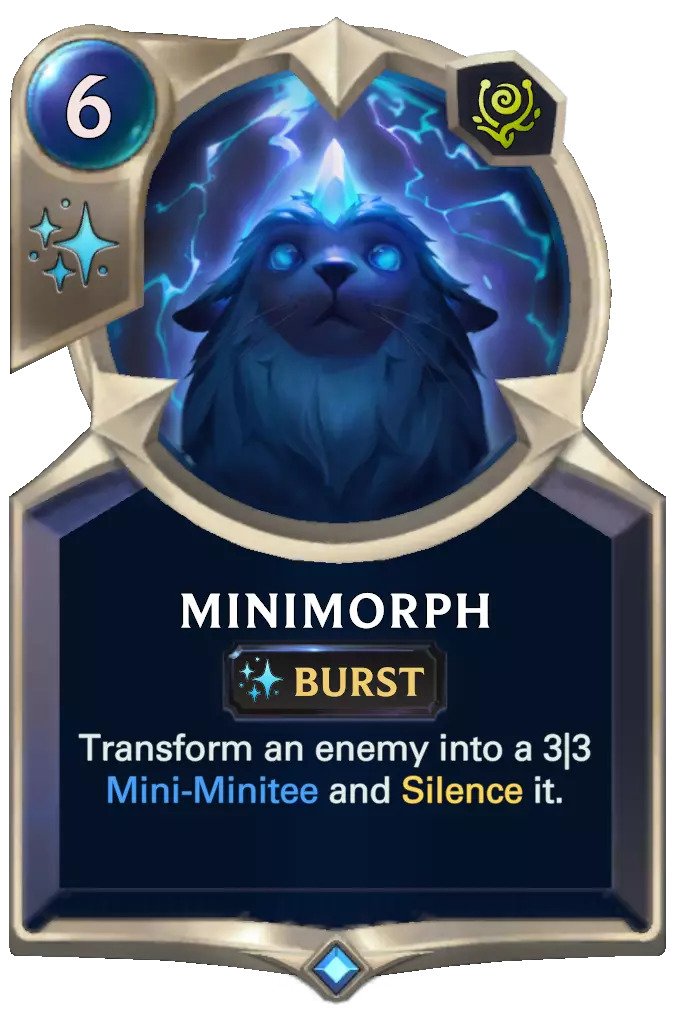 As we begin to wrap up the end of the year, we often have thoughts about the future and the changes we’d like to make.

Just remember, it doesn’t take a new year to start over. When life inevitably catches up to us and we stray off course, we have full control to try again.