Hey all, it’s Trevor “Shugo” Yung and today we’re going back to Ionia.

We’ve got a bunch of new support cards with Recall synergy in preparation for the final reveal tomorrow!

Based on the splash art and reveals posted on the LoR Twitter account, it looks like Ahri will be the final champion addition for this set.

Here are the card’s from Day 8 of Magic Misadventures Reveals: 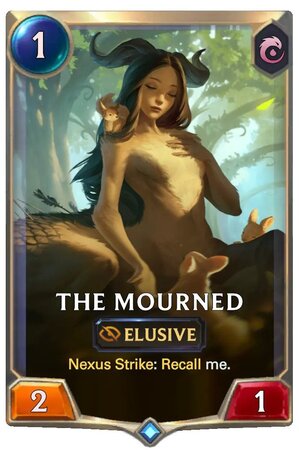 The first comparison that comes to mind is Navori Bladescout. Both of these come down as Elusive 2/1’s. Except instead of losing the keyword, The Mourned goes back to your hand.

Outside of Recall synergy this card looks pretty solid. Elusive Rally decks would love this type of card. Since the Recall triggers only on Nexus Strike, you can drop it the turn before to set up an open-attack.

Solid unit regardless of Recall, with potential to be even more promising after the final reveals! 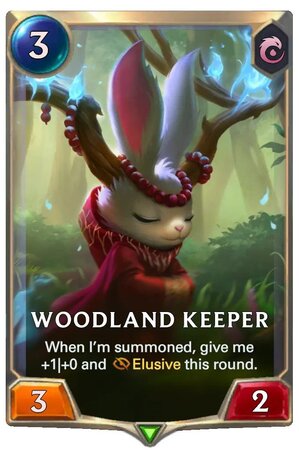 Speaking of Navori Bladescout.. Woodland Keeper looks like the older sibling. A four power Elusive for three mana is strong, but reverting back to a vanilla 3/2 isn’t great.

Worst of all, the 4/2 stats make it vulnerable to removal. It could be cute with Recalls, but is likely too slow and far too risky to bother with. 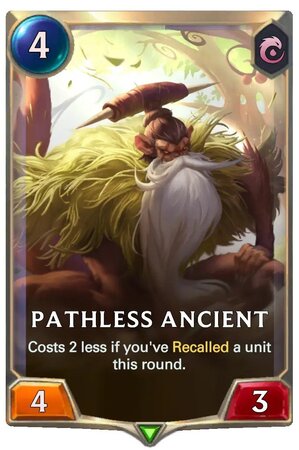 At the very best this is a vanilla two mana 4/3…except you’re required to have Recalled a unit to enable the reduction.

The ideal scenario is, your opponent targets your unit for removal, you Recall in response, then play your reduced Pathless Ancient. All that work and you’ve got yourself a 4/3; not very desired stats.

I’ll admit there’s cute synergy with The Mourned allowing you to play this card on turn two. But the near-negligible tempo gained from a two mana 4/3 is counteracted by losing a 2/1. 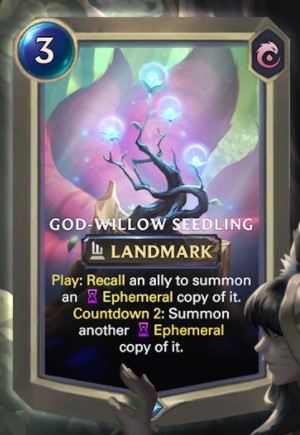 Woah now this is an interesting landmark. It allows you to Recall at summon speed, meaning your opponent can’t respond.

If you drop this on a defensive turn pre-combat, your opponent is now forced to skip their attack, or give you a free Ephemeral blocker.

Not only that, but any summon effects are retriggered immediately. Then a second time two rounds later.

There’s some real potential here and I can’t wait to see what crazy combos we come up with! 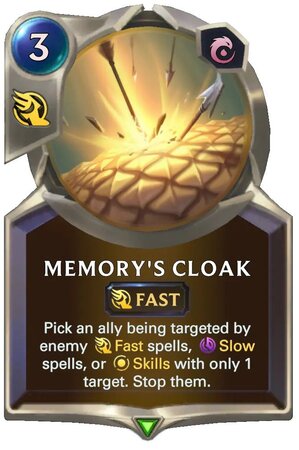 We’ve been given another type of counterspell with Memory’s Cloak. This card is interesting as it’s designed to specifically protect one target. In a sense, it will function similarly to Bastion.

Be mindful that this won’t protect against everything. Cards like Single Combat or Concerted Strike target multiple units, so this won’t negate them. It also can’t prevent spells that target the Nexus, so be prepared to eat that Decimate.

Despite everything, Memory’s Cloak is a reasonable card and could be a solid consideration in some metas. 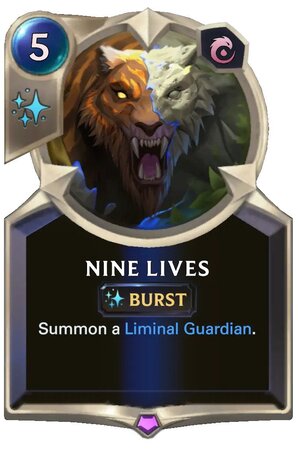 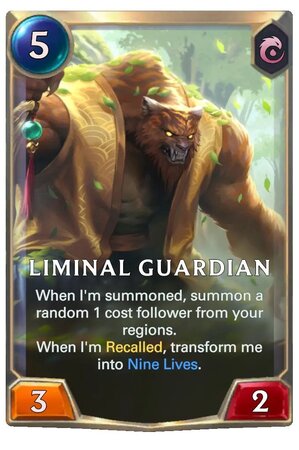 We’ve now got another burst spell that summons a unit, or in this case, units. On the surface, five mana for a 3/2 and random 1-drop looks awful. However, the ability to summon two blockers at burst speed with one card is quite powerful.

It looks similar to Concussive Palm with its 3/2 stat line and Recall ability, but five mana is a big difference. Additionally, Ionia as a region has never struggled with responding to open-attacks, making this even less necessary.

I could see it as a 1-of tech in some lists to help defend against really wide boards, but otherwise it’s not quite good enough. 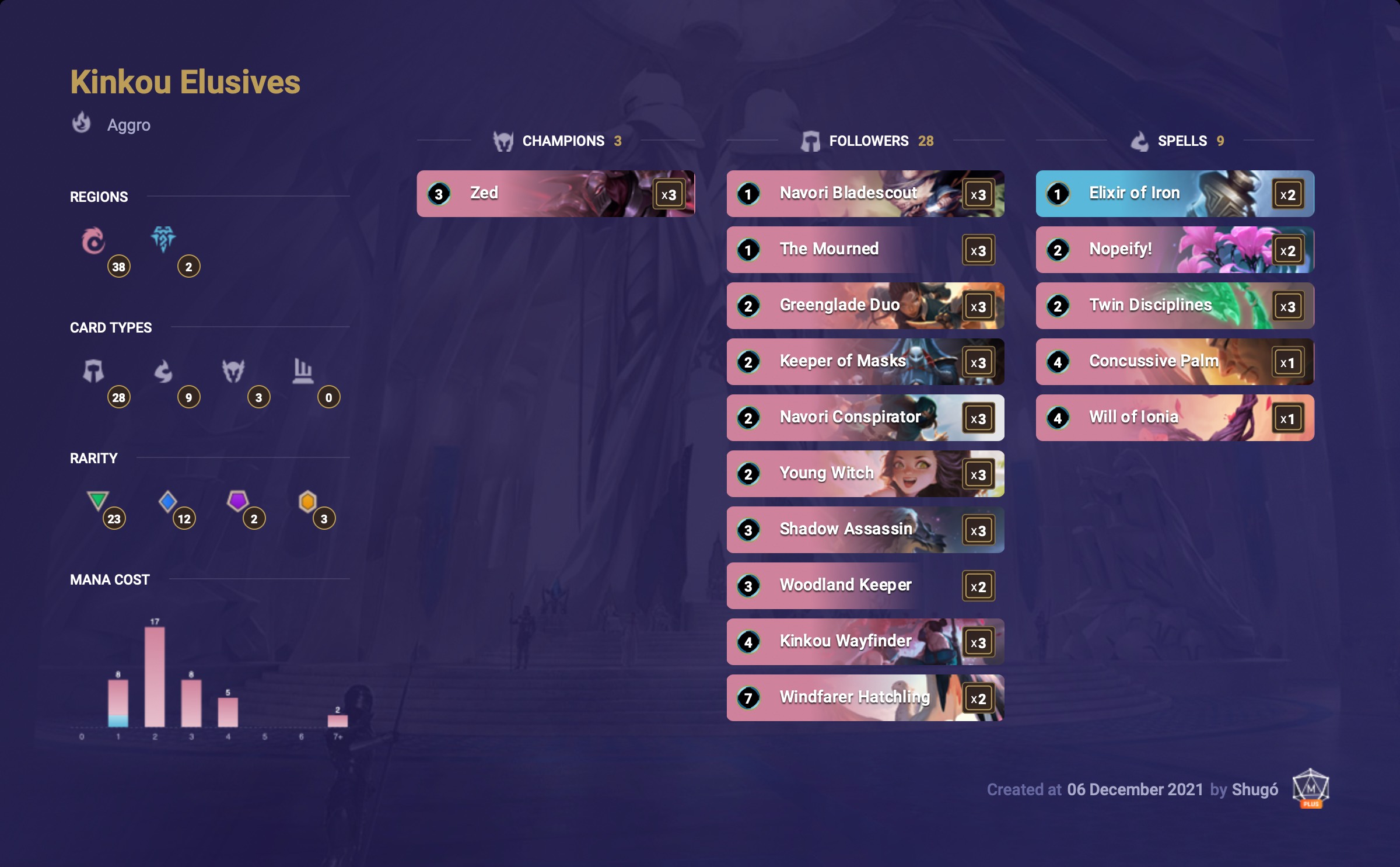 I’m sorry, I had to do it. It’s a classic deck from the Beta days, and with The Mourned we can use Kinkou Wayfinder to summon two 2/1 Elusives!

The rest is pretty straightforward, just jam those Elusives and smack face!

If you struggle to see the results when going down one path, consider taking a left turn.