Love it or hate it there’s one card from the new expansion that is making more waves than all the rest combined.

I’m Jordan “WhatAmI” Abronson and I’m here to do my solemn duty as the fun police. 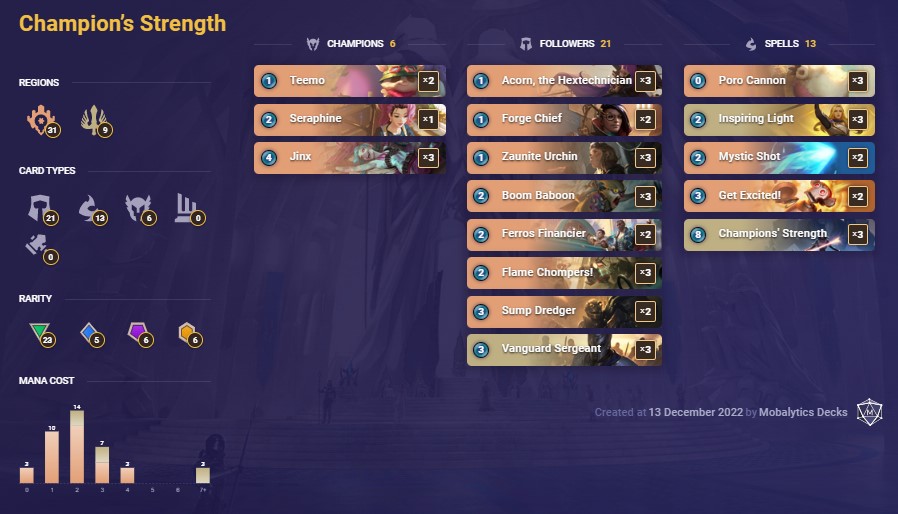 There are so many different forms of this archetype that displaying them all here would be virtually impossible. The only thing they really have in common is their collective plan of effectively harnessing the power of our very own newly created eight-mana “I win” button.

Yes, there are answers to this, and we’ll be talking about all those shortly. But when you aren’t in the right spot to deal with it giving even a three or four-wide board of units +4|+4 and scout is a pretty good way to end a game on the spot. I’m all about things that make my opponent have it, and this is at the very top of that list right now.

Beyond that, good versions of this deck tend to start looking into what their backup plan is going to be. This is necessary on the theory that you simply aren’t going to find this card in every game you play. Vanguard Sergeant is a pretty common attempt, as For Demacia can play the part of the new Four Demacia when it refuses to show up.

This particular version also leans on Jinx and Inspiring light. The theory is that if we are already flooding the board we might as well get some rockets or some solid extra stats for it. All in all these decks tend to be exceedingly linear and frustrating to deal with unless you’re ready for them. 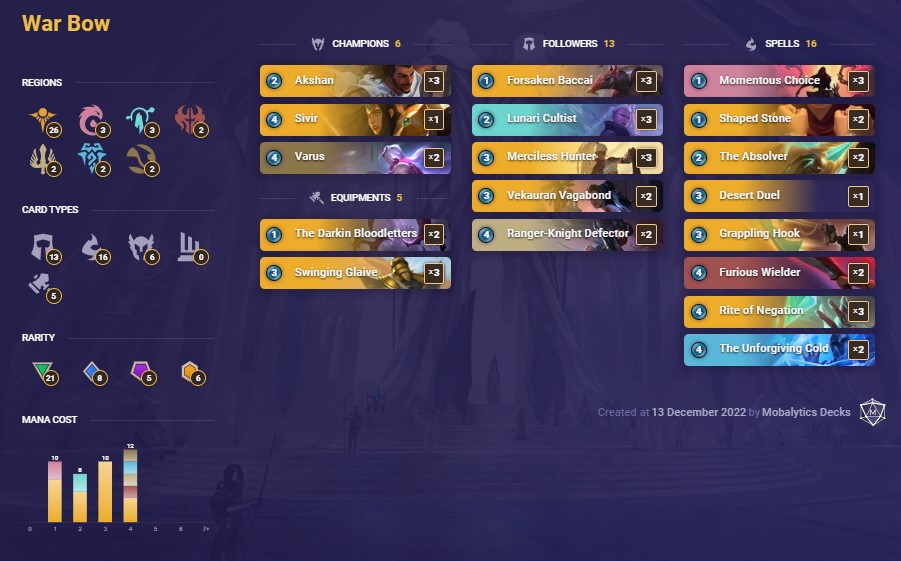 What you’re going to find quite a bit tonight in the decks we feature is a solid way to stop the Champion’s Strength game plan from successfully resolving. Deny and Rite of Negation is exceedingly powerful tools when dealing with high mana cost spells doing broken things.

To get a solid counter in, what you want to be looking for is a deck that provides sufficient pressure that the mana differential you create will result in your victory. Now, what exactly do I mean by that?

Well, when an old-school control deck packing Deny goes up four mana, they might take long enough to end the game that our opponent can get another chance to set up. However, when a pressure-based Akshan deck goes up four mana it’s generally going to be able to leverage that into killing you.

This is important because of the numerous secondary plans these archetypes tend to have. There are times when being the pure control is a solid game plan, but I do not think that now is one of them. We need to be proactive to make our reactive tools actually matter, otherwise, they are just one for ones. 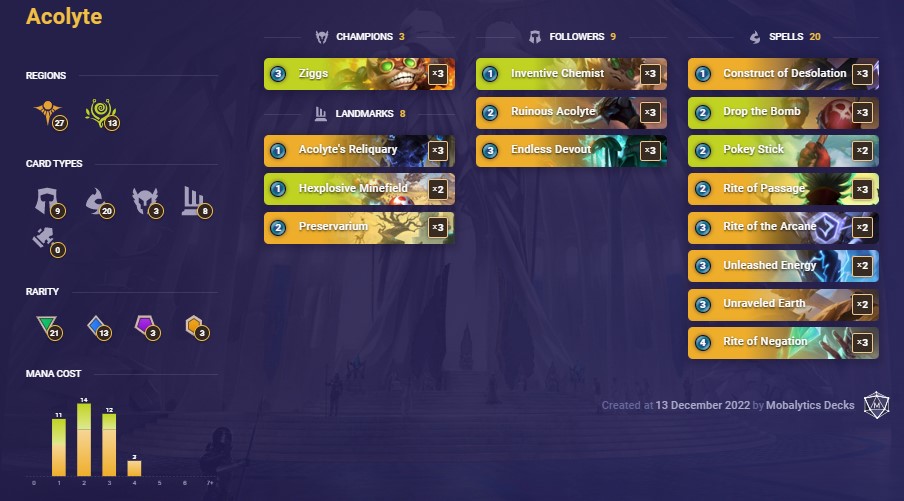 Next, we have the new kid on the block. This deck has only really shown its face in the last couple of days so it’s hard to tell if it will stick around or not. For now, though it certainly seems to exploit a key weakness of many of the Strength decks in quite a powerful manner.

The question we’re asking here is, “What does a deck that wants to swarm the board as quickly and stickily as possible lack?” And the answer is solid fearsome blockers. Ruinous Acolyte grows to truly unreasonable proportions in this deck and puts on a clock that keeps growing.

This hard-to-block unstoppable force will put our opponent in potentially lethal positions as early as the fifth or sixth turn of the game. So even if we weren’t prepared for the opposition’s shenanigans there are plenty of times when we can straight-up match them on speed.

Of course, that would be far too simple though. Rite of Negation is here to make sure that our powerful game plan work while theirs fails. Also in a pinch Hexplosive Minefield can sometimes drop two stuns in a turn to survive a resolved Champion’s Strength. Not exactly an ideal situation, but a secondary out if we need to go looking for one. 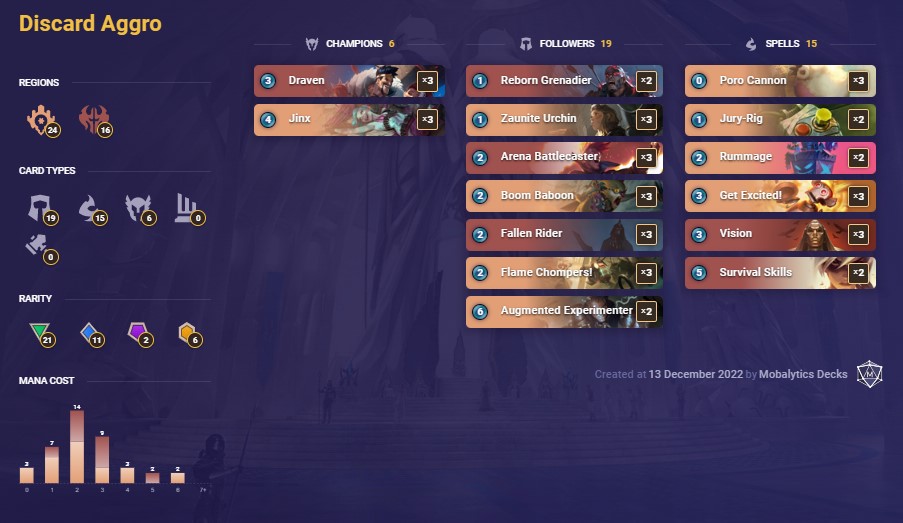 Last but not least is the old important adage that everyone has a plan until they get punched in the face. Good old Discard Aggro, just dropping its entire hand onto the board in the first four turns and demanding that you have an answer.

What Champion’s Strength decks *don’t* do very well is answer questions. They generally prefer to be the ones asking them. What that means is that if you are forcing blocks as early as turn three or four, it’s going to be exceedingly difficult for your opponent to assemble a wide enough board to kill you with.

While there are some slightly slower aggressive decks that the Strength decks can do well into simply by refusing to block, that doesn’t tend to work out particularly well here. Deciding not to block against Discard Aggro is a one-way trip to getting murderlized before you manage to even get to play your eight mana spell.

You’ll note though that there aren’t any Deny equivalent cards in this deck. Does that mean that we end up losing immediately if our opponent manages to resolve their key card? Of course not. What fun would countering someone is if they managed to get out of trouble that easily?

No, our Deny substitute here is the rarely seen hard-cast Survival skills. In many other spots it will do quite well protecting a Draven or a Jinx, but here it simply slams the breaks on your opponent’s attack turn. They can have as big units as they want and yours will just laugh it up with their last point of health