Unless you’ve been doing your best Crusty Codger impersonation and scuttling away under whatever rocks you can find you’ll have been informed that next weekend is the Empires of the Ascended Seasonal Tournament.

With that in mind now seems like the perfect time to talk about how to craft three-deck lineups.

I’m Jordan “WhatAmI” Abronson and I’m here to do my best to help you through that harrowing process.

Before we get down to the nuts and bolts, let’s have a quick primer on how the Seasonal works.

This means that Shurima/Noxus, Shurima/Shadow Isles, and Shurima/Demacia is a perfectly acceptable lineup, as long as your Azir only stars in one of those decks.

Then each round you will see your opponent’s three decks and get to choose one of them that they don’t get to play that round.

Finally, you play your games, and to win the match you have to win a game with each of your two remaining decks.

When you win with a deck, you must switch to the other. When you lose, you may choose to switch or try again with the same deck into your opponent’s new deck.

As far as I’m concerned there are two extremely effective places to start when it comes to making tournament-winning lineups.

Sound a little complex still? Don’t worry, we’re here to break it down.

For this strategy, you are trying to be as non-polarized as possible and allow your play skill and luck on the day to carry you through to victory.

The theory here is that over the course of a long day of matches you are bound to run into some bad ones no matter what you do.

If you can bring three decks whose bad matchups are 45% to win rather than 30% to win, then you are going to be severely mitigating the matchup luck side of the equation.

This strategy will often involve simply bringing the most powerful decks that exist at any given time.

The idea is that if you are doing sufficiently powerful things then even people who are trying to counter you will stumble occasionally and you will be able to steal games.

The best example of this type of deck would be pre-nerf Fiora Shen.

It was around 50% into almost all its matchups, with a few favored and a few unfavored but rarely by much.

While we can’t get quite that close to the center anymore there are definitely still good options. 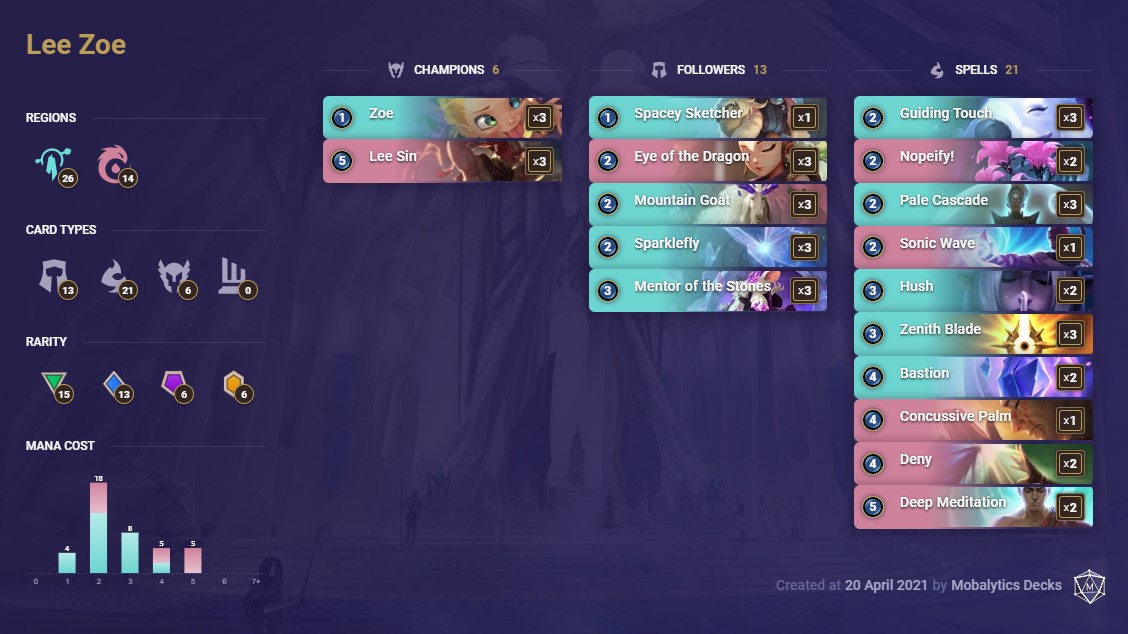 Lee/Zoe can be such a ridiculously powerful deck that even the things that try to counter it often fail.

While aggro decks might be favored sometimes all it takes is them stumbling for a moment or one giant Sparklefly to turn the match on its head.

And if you’re not pressuring them then you’ll give Lee all the time he needs to show up and kick you into the next dimension. 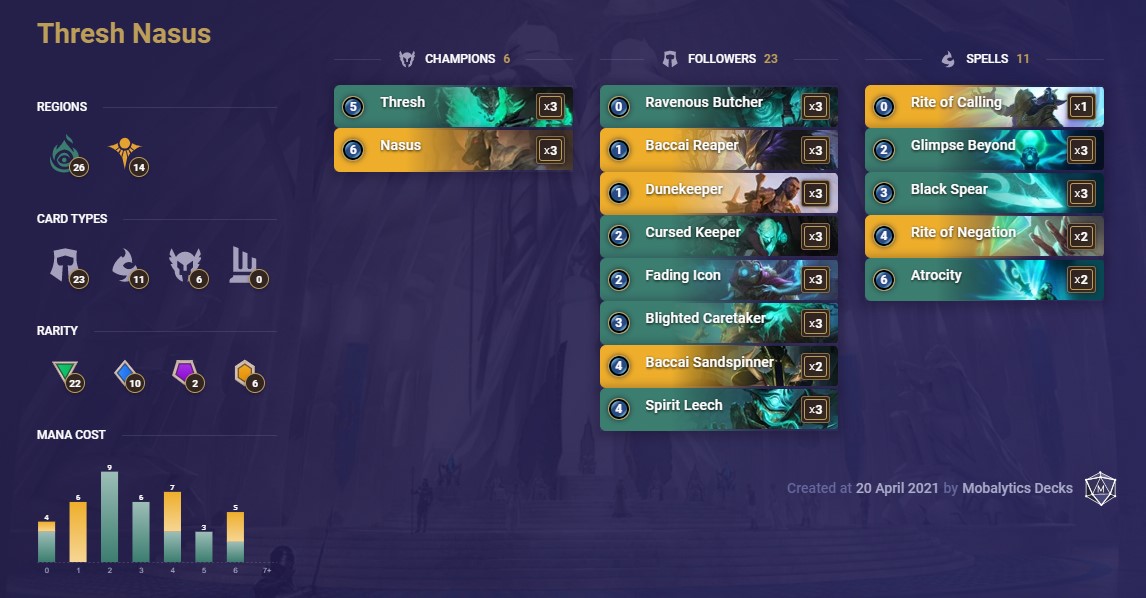 The new kid on the block Thresh/Nasus has been showing its chops lately.

Insanely aggressive early draws can steal games out of nowhere and a leveled Nasus with Atrocity and/or Rite of Negation backup is very difficult to interact with.

While Hush is scary sometimes they just don’t have it, or your second copy of death-doggo will be enough to seal the deal. 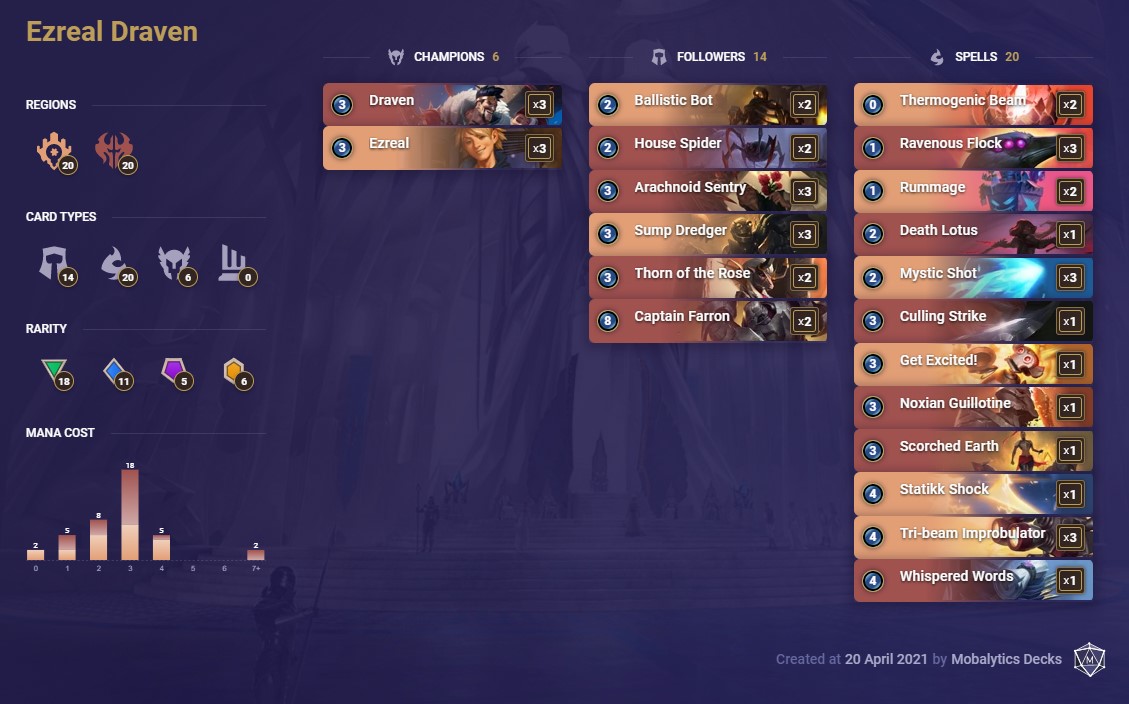 Finally, Ezreal/Draven is a great way to round it out.

While this one might be an old dog it doesn’t really need any new tricks. Controlling the board and accruing tempo while building up to Captain Farron and leveled Ezreal is hard to argue with.

Even into the tougher matchups, your Tri-Beams are going to steal a surprising number of games.

Because of the structure of the tournament, there is a secondary, significantly more dangerous, way to attempt to build a lineup.

Since each of your decks needs to win once, that means hypothetically speaking if all three of your choices are extremely favored into one of the three decks your opponent brought, then their other two choices can sometimes not even matter.

To exploit this design we need two things.

Even if we think we have a good read on the meta we can’t just throw everything else away because there will always be people who will bring other decks.

So the decks we craft will need solid game plans of their own, whose matchup tables synergize effectively against what we want to target.

To do this I like to think about the top three-five most played decks and call them the “pillars,” of the metagame.

You then add in the sixth pillar, which is always some variety of scary aggro decks, and you have a decent idea of what a lot of people will be playing.

The danger of this theory is that when we have unfavorable matches, they will be more unfavorable than those we would find playing “The Solid.”

With higher highs and lower lows, this lineup-building practice leads to what is often called “polarization” which simply means things will be either good or bad for you, but rarely anywhere in the middle.

I don’t know if anyone was paying attention in the week leading up to the last Seasonal but as fast as the metagame always moved, it accelerated significantly.

Because of that phenomenon, I am severely hesitant to make predictions on what the pillars will be going into next Saturday’s festivities.

I’ll leave my five best guesses below for people who want to attempt to create targeted lineups to work with, but I would urge anyone who does to keep a close eye on the shifting meta.

Even if I’m correct right now that doesn’t mean I will be in seven days.

In no particular order I would have on my mind when trying to build decks for the Seasonal:

Best of luck to anyone out there getting ready for what is looking to be a rocking Seasonal tournament. Hope to see you all out there on the battlefield and may the cards be ever in your favor.