Game Designer RubinZoo Teases the Future of Legends of Runeterra

Through Twitter and interviews with players such as LoR’s First World Champion Alanzq, Riot RubinZoo has been teasing about what is to come in 2023 for Legends of Runeterra.

Notably that 2023 Worlds will be returning but potentially with a different format and more players. On top of this, 2022 LoR World Champion AragOrnn has a direct invitation to compete in the 2023 World Championship!

Although Rubin can’t spoil everything that is to come, he could certainly give some ideas of what the team is looking at, problems they want to solve, as well as what is currently in the works. Let’s take a look at everything we do know based on information from Rubin!

He also tweeted that they will be launching a Beta for Tournament seasons directly after patch 4.1 which plenty of players will be ecstatic to join! 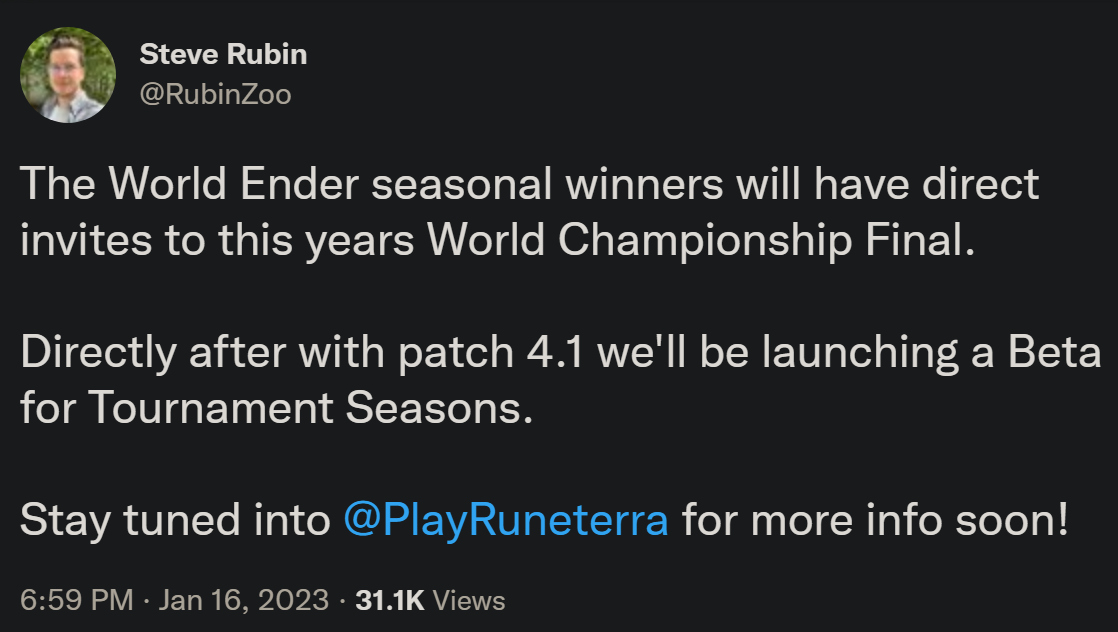 A huge change that is coming to LoR is the Runeterra Opens. These will be open tournaments that any player can join, regardless of rank! Rubin states the goal of this addition is to get more players into tournament play and make it overall more inclusive.

Limiting tournaments to the top of ladder makes many players never give tournaments a shot. This is something the team wants to change and feels that making open tournaments is the best way to make tournaments more inclusive!
These tournaments are expected to offer players rewards – ideally more prestigious awards where players can show off their achievements.

The 2022 Legends of Runeterra World Champion was fun and exciting for many reasons, but one of those reasons was the fresh meta that players were able to enjoy. Seasonal tournaments are at the end of the season where the most powerful decks and best bans are well-known to just about every player.

However, the World Championship took a different direction and dumped players into a new environment where decks had limited testing and preparation time.

Rubin states that this made Worlds more intriguing to watch and that the team wants to have a mix of tournaments in developed as well as undeveloped metas. They are hoping to achieve this with future Runeterra tournaments.

He talked about how making it so Worlds was fair for all competitors meant the team had to do things differently. This included releasing all cards early and allowing players to loan their secret accounts to multiple test partners.

He notes that Riot and the team are very player-centric and want to do what is best for players.

On top of this, many members of the team were previously competitive players themselves, so they had a strong idea of what players want when it comes to competitive play as well as making sure it is fair to all.

With new tournaments coming to Legends of Runeterra, he expressed that the goal of these tournaments is to make more frequent and more meaningful tournaments.

He also mentions that making tournaments more inclusive and open to players outside of the top of ladder is a top priority but serving well established top players as well as more casual players can be a hard medium to strike, but it is something they want to do.

Finally, they also want to make more automation for tournaments to help with long term sustainability of LoR tournaments.

Another exciting announcement is Riot’s plans to partner up with the community to bring future tournaments and other big events as well! Including a variety of tournament formats. 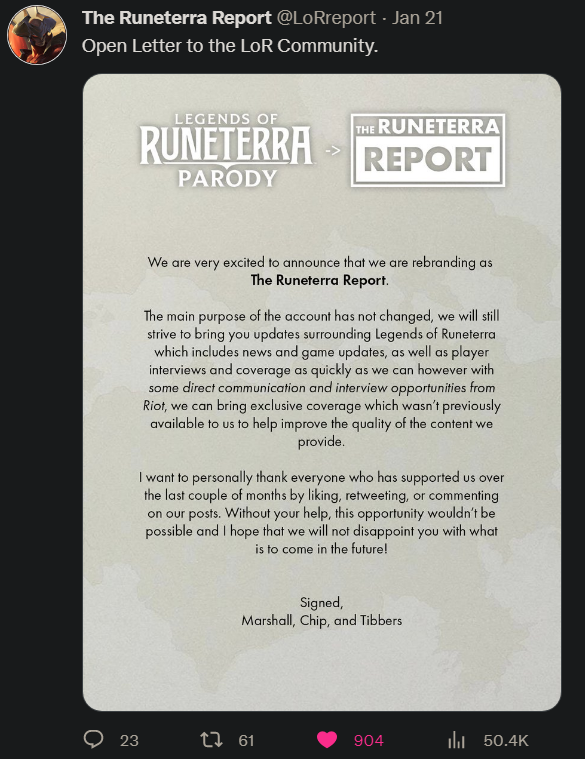 Rubin didn’t only talk about future tournaments, but he also addressed his thoughts on card rotation, balance patches, hotfixes, and issues with the current ladder system.

With February fast approaching with a balance patch as well as rotation, many players have been discussing their thoughts about rotation. It’s often a controversial topic as many players don’t want to see their favorite cards leave the standard format.

RubinZoo has the opinion that rotation is necessary for the game to continue to be good. A problem that presents itself without rotation is that in order for a new champion to find a spot in the meta, it has to be power crept. If this continues, then newer champions will always be much stronger than older champions which we already see to an extent.

He wants all champions to have a chance to find their spot in the game and adding an Eternal format that will have its own set of balance patches is designed to help keep power creep from happening too much in the standard format.

Speaking of balance changes, Rubin said that there will be more of a scheduled out balance patches that he hopes to be more frequent. During this, he also mentioned that the team is now more open to doing hotfixes after the success of the previous two. They found that this made it easier to balance the game in future balance patches as well as it being well received by the player base.

Hotfixes can be tough due to being costly, less time to test the changes, as well as catching players off guard as a card they are using can change while they are in game. Although they don’t plan to utilize hotfixes too much as they are a lot of work to put through, they will do them when needed and necessary.

When it comes to these changes, they are often targeted to decks that are performing best on the ladder rather than in tournament play, so let’s talk about ladder.

First off, Rubin mentions that something the team learned was that ladder was a bit too impactful when deciding if a player advanced during seasonals as well as to worlds. There was a lot of incentive for players to camp their current ranks.

When asked about decay, he said he didn’t like the idea of forcing players to play and making the game feel like a chore. Instead, the team decided to make ladder less impactful this year compared to tournament play. They have also talked about adding a higher rank, Grandmaster and although that isn’t being worked on at the time, it is still on the discussion table.

Another thing top players have asked for several times is a best of 3 ladder format. Rubin replied that this made the team a bit nervous because it didn’t fit the purpose of ladder which is to have fast, satisfying progress and be accessible to players.

More than half the players are on mobile, so most are looking for quick games rather than being stuck in best-of-three matches.

Although best of 3 is likely off the table, Rubin did express that the team has a desire to work on making a Limited Mode to replace the former Expeditions Mode that he had worked on in the past. This is currently not being worked on, but it is something that the team is excited about and they hope to do in the future!

Runeterra opens is the most exciting part of what Rubin has teased for 2023 LoR, but also it makes me excited that Riot will be working with the community more to make big events and tournaments.

As LoR isn’t the biggest Riot game, there is certainly a lot of heart in the community that keeps it going and Riot recognizes this and wants to continue to foster that growth. Rubin also reminds people to continue to have your eyes on the official @PlayRuneterra Twitter account to keep updated on what is to come!

If you’d like to see the full interview Alanzq did with RubinZoo, you can find it here

Thanks for reading!
-Silverfuse