LoR Fundamentals: The Art of Burn

Legends of Runeterra Fundamentals: The Art of Burn

Ah yes, Burn… One of the most fundamental archetypes that have been around since the dawn of time.

While its prevalence comes and goes, it’s always waiting around the corner to make a grand entrance. Whenever a new season starts, Burn’s ready to race to the top.

Whenever a busted combo deck emerges, outcomes Burn to keep them honest.

It’s Trevor “Shugo” Yung here, and whether you love it or hate it, Burn isn’t going away. So allow me to guide you through some of the intricacies that make Burn the powerhouse that it is. 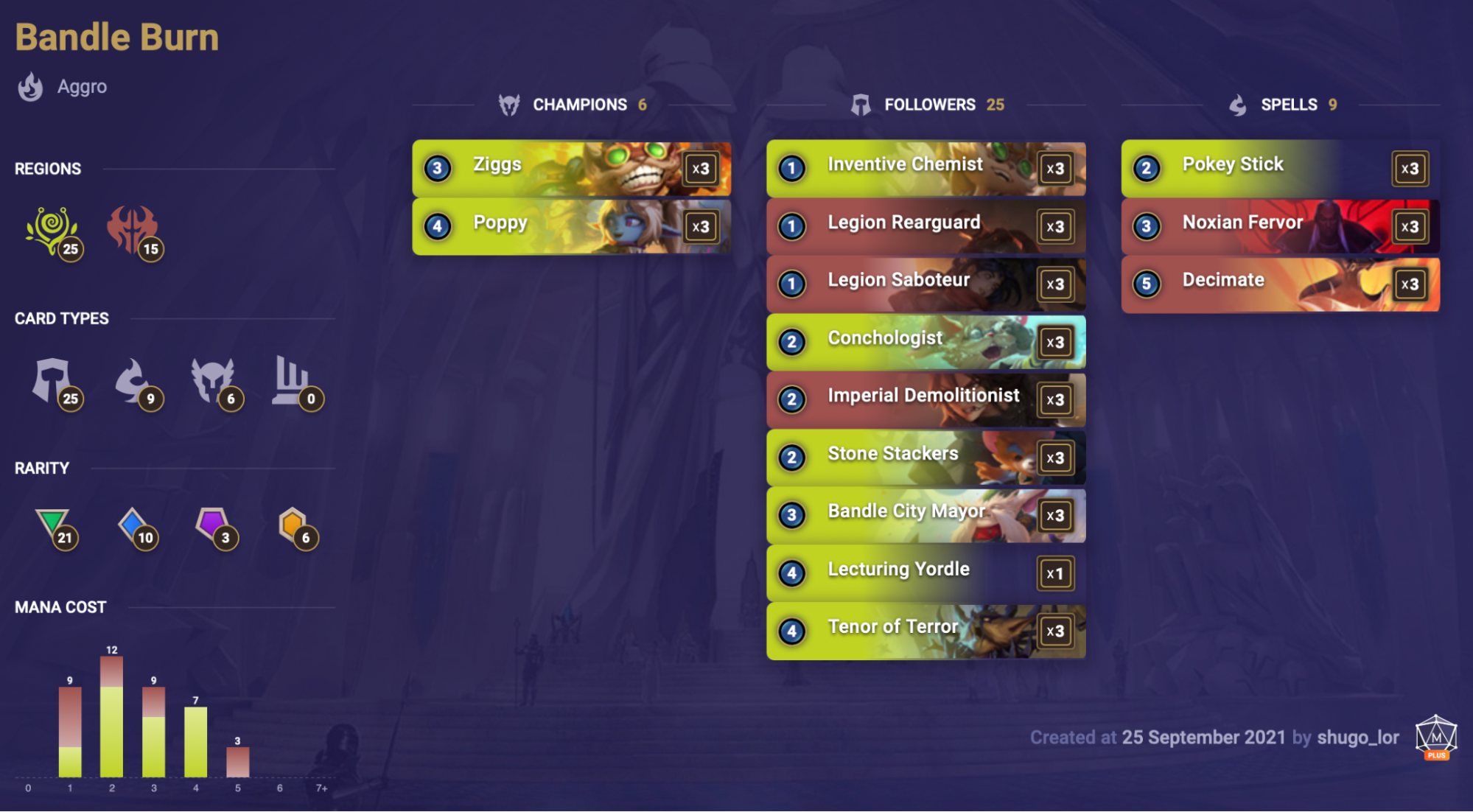 Note: Old photo taken from my Bandle Burn guide. I don’t miss this.

Thankfully the days of Bandle Burn have passed. The deck during its prime boasted and maintained an absurd 60% win rate. That’s insanely high for an Aggro deck especially. The only likely comparison would be the original championless Nox PnZ way back during the launch of The Rising Tides.

We’re nowhere close to that point now, but as history shows, all it takes is some added support cards to push Burn to that whole new level. Does anyone else remember pre-nerf Crimson Disciple and Boomcrew Rookie? Those were scary times.

The Noxus Burn package is incredibly consistent and has continued to remain a reliable shell for players to return to. Let’s take a closer look at the key pieces. 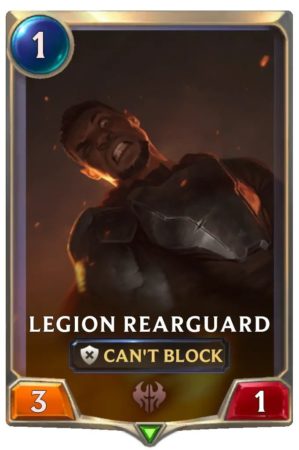 A one mana 3|2 well exceeds the typical 2|1 stats most 1-drops have. The inability to block is relevant but is a minor drawback in exchange for its huge boost in power.

Decks without 1-drops are forced to take three to the face, and this compounds further alongside additional 1-drops.

I mean, this guy was nerfed at one point before being reverted to his current glory. That should be proof enough. 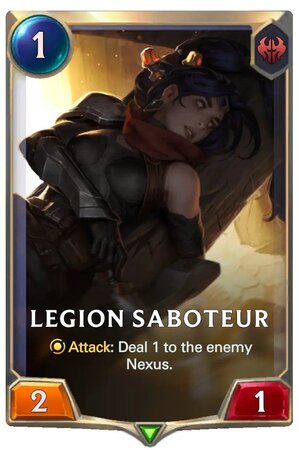 I love this card. It’s a simple yet elegant design that leads to important decisions from both sides. Pinging the Nexus on attack gives Legion Saboteur an edge over its competitors and makes opponents think twice when preparing their answer. It threatens three damage on its own and near-guarantees one point of damage in the mid to late game. 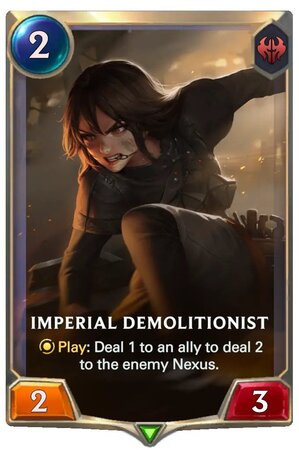 Everyone freaked out about this card back when it was spoiled, and for good reason. While you do need proper targets to use it effectively, it’s two burn damage on a 2-drop body. That’s insane for its cost, and as such defines how we have to think when going into the matchup.

If you’re playing Burn, Noxian Fervor is your savior. When up against Burn, it’s your nightmare. It counters removal, dodges Lifesteal, and gives the player an out when all else is lost.

We’ll be diving into this more later on, as it’s essential to understand from both perspectives.

It’s funny to think back to Beta when everyone thought Decimate was trash. Many of us have TCG/CCG backgrounds, so evaluating it under those guidelines gave a poor impression. Five mana to deal four damage to the opponent?

Yep, Decimate is pretty good. When Burn as an archetype is so powerful, you can’t argue with extra available damage.

The Lists That Keep On Living

While many decks only live a moment in the spotlight, these two just keep coming back. Staying true to their core, these decks continue to stand up to the test of time. 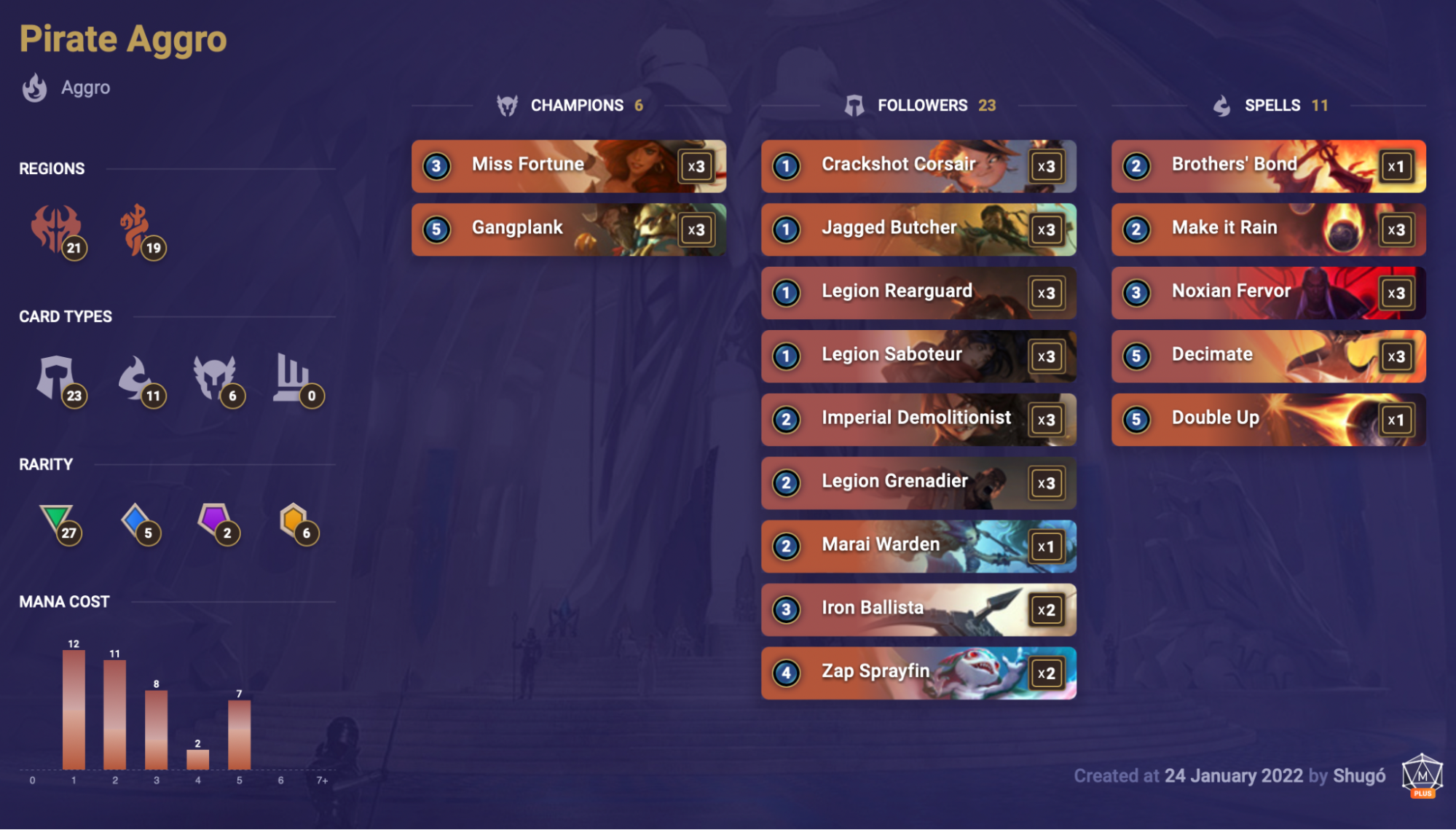 Despite the occasional adjustment, Pirate Aggro has held up its core-shell of cards. The combination of Noxus and Bilgewater makes it impossible to avoid taking some damage. Crackshot Corsair, Legion Saboteur, and Miss Fortune all ping upon attack. No matter how you block it’s inevitable that something gets through.

Pirate Aggro fares well versus other aggressive decks thanks to Make it Rain. A widespread of pings can be extremely punishing. Dropping Jagged Butcher as a 3|3 makes it incredibly challenging to keep up, and thus puts players in a tough spot.

Gangplank gives the deck some late-game power when the time drags on too long. It’s the perfect package of strong early tempo and consistent finisher.

Pirates certainly took over as the definitive Burn deck at one point, but don’t forget about the tried and true classic. 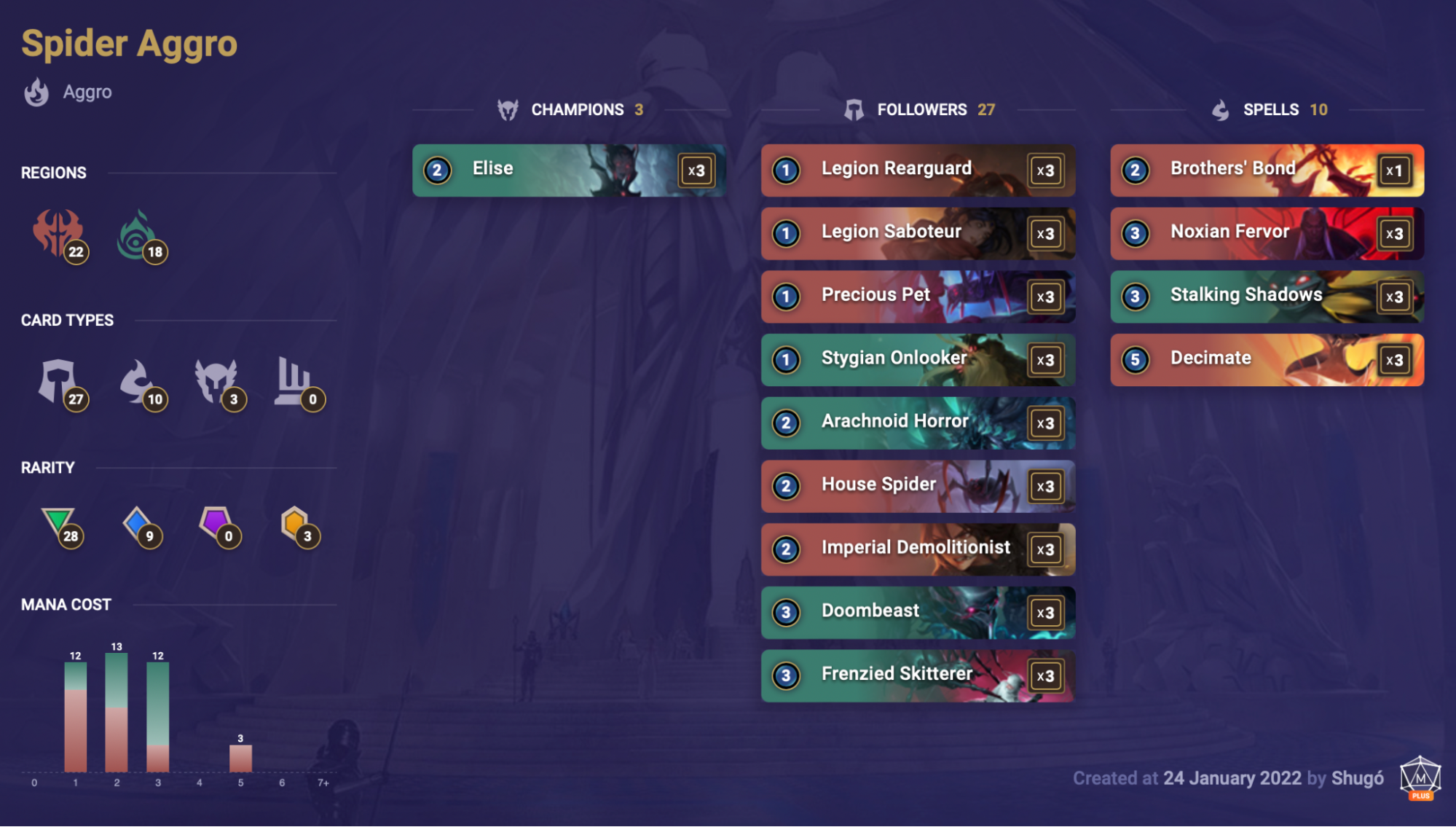 Yep, it’s Spider Aggro. It’s what many of us started with thanks to those two free copies of Elise, along with it being a very budget-friendly deck overall.

Spider Aggro aims to go as wide as possible to extend its reach to the Nexus. Fearsome can be extremely punishing for decks lacking effective blockers, and is often the reason the deck finds its resurgence into the meta.

Stalking Shadows lets you overload on Burn by finding Imperial Demolitionist or Doombeast. Otherwise, stack up on Skitterers and go to town!

Burn’s general game plan remains as straightforward as ever. Swarm the board with cheap units to push through combat damage, then finish with direct Nexus damage.

With that said, it’s important to be mindful of certain damage thresholds. As a basic example, avoid letting your Nexus health reach four or less, or else you fall within the range of Decimate.

Let’s take a look at some key cards to look out for. Here are the most common ones. Of course, there are others, but knowing how to avoid the essentials will give you an edge in the matchup.

While the damage is inevitable, it’s slow. So if you’re close to winning the game, don’t let them have the chance to play it.

This could also mean preemptively drawing a card (non-Burst speed) to give yourself a potential out for survival.

It’s extremely important to be patient with your removal. Either use it safely when they’re trapped under three mana or better yet hold it to deny their Fervor.

They’re also more likely to cast it on a 2-3 health unit when possible to avoid being countered by pings. Don’t rely on Lifesteal to be your savior, because Noxian Fervor will shut it down hard.

Similar to Noxian Fervor, you’ll want to hold up removal to counter the skill. The notable difference is the speed. Use that to your advantage to prevent giving them an opportunity. Challenge, remove, or pressure them to block before they get the chance.

It’s only one damage, but sometimes that’s enough to seal the game. If it’s one of few ways you can lose, go as wide as possible to reduce the odds of it hitting your Nexus. 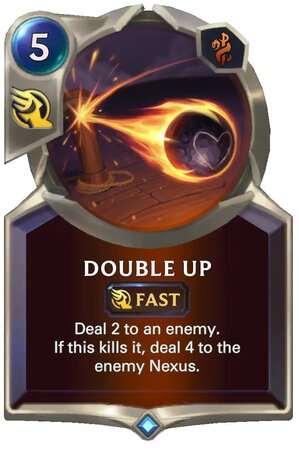 While less common of a spell and exclusive to Bilgewater, Double Up threatens four damage at Fast speed when unprepared. Either as a way to kill your unit or simply avoid playing anything that would die to it.

Another Burn effect at unit speed, except this occasionally requires two actions because of its Nightfall.

Unless the opponent has a Burst or Focus spell, Doombeast will take an extra moment to come down. That’s extremely important to know to avoid dying to it. 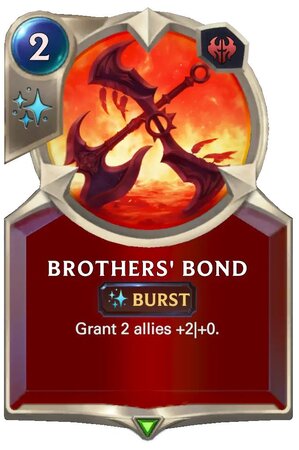 Okay, while this isn’t Burn, it does threaten four damage at Burst speed for only two mana. That’s a very high ceiling for power, so you need to consider your blocks extra carefully.

The unblocked units should fall within removal range, thus allowing you to counter accordingly when they make their move.

Once you have these cards in mind, it’s easy to piece together more potential scenarios.

Different Nexus health amounts will keep you safe from various Burn combos. It’s important to pay attention to how they’re playing to help get a read on their hand. This comes with practice, but you’ll start to notice different play patterns.

The Future of Noxus

Noxus has proven itself to be the crutch of the Burn archetype. While there may have been a few outliers, there’s no doubt that Noxus is first in line for considerations whenever looking at a new list. Its established core is so consistent and reliable that it can find a home with pretty much every region.

It’ll be interesting to see how things progress in future expansions. Noxus itself hasn’t had any real new Burn tools since The Rising Tides.

And that’s probably by design. If Noxus Burn does get any additional support, there’s no telling what level of consistency it could achieve!

When you have a moment, take the time to plan out your week. Make note of everything you need to do so you can actively stay on top of it.

Now that you’re finished. Which of those things can you get done right now?

Plan ahead, then gets further ahead. You’ll thank yourself later.

Thanks for reading! If you enjoyed this guide, check out Shugo’s other LoR articles.