We’re gearing up for the seasonal tournament with our first round of Darkin powerhouses. Sounds like the perfect time to roll out the next.

I’m Jordan “WhatAmI” Abronson and we’re going from zero all the way to one hundred on our first spoiler day with some absolutely insane new cards. 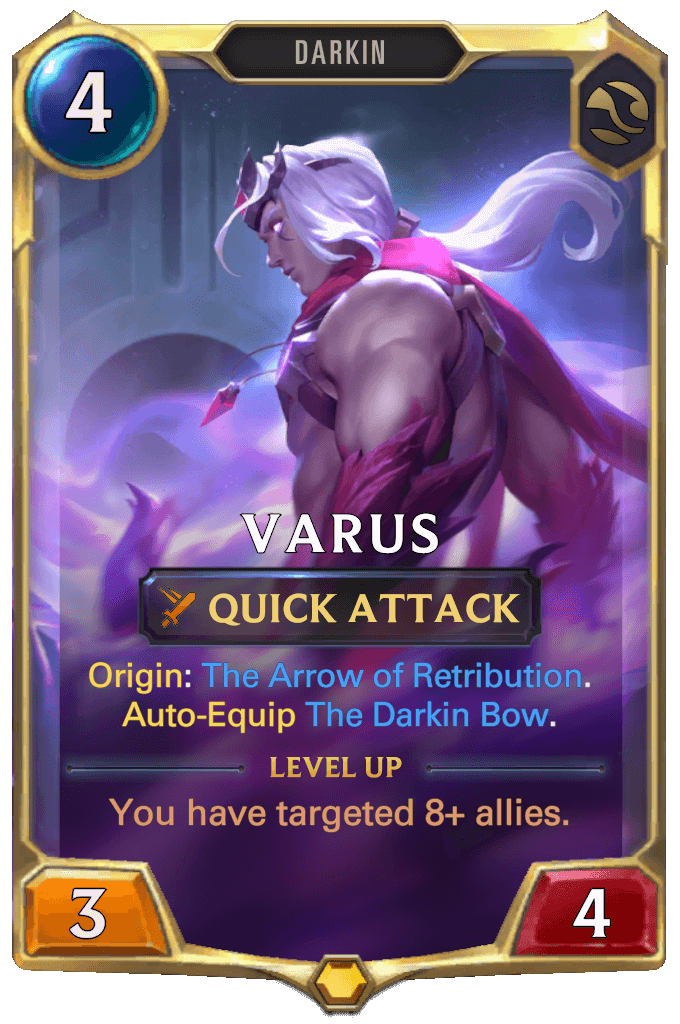 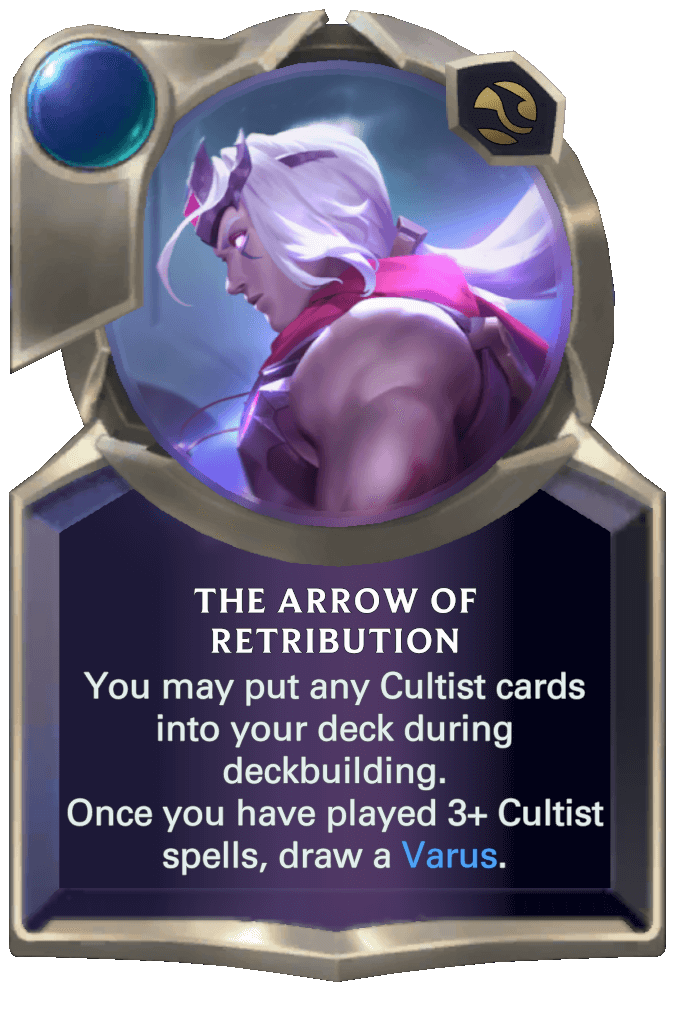 I’ll admit that I am a little less high on this Origin after seeing the way that Kayn turned out.

Though a deck where you get to auto-draw both your champions on turn four does sound kind of cool. The problem is that deck would have truly horrific building restrictions, possibly to the point of unplayability. 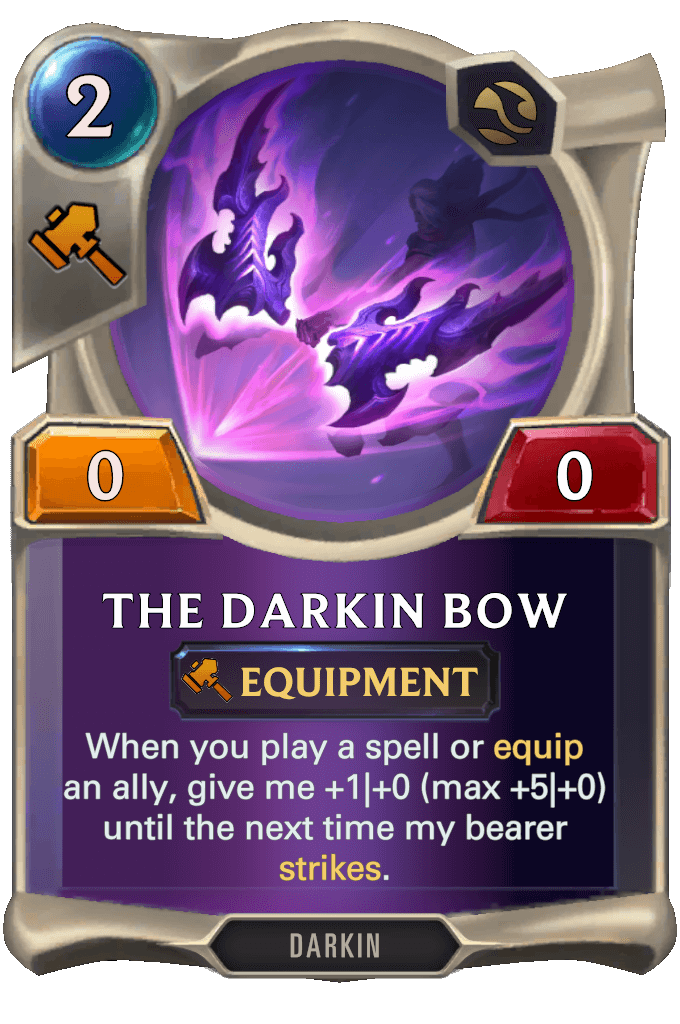 If we look Varus on his own though perhaps with the help of someone like Akshan or Pantheon, then perhaps he has more potential. Charging up a fourteen-point overwhelm attack is a pretty solid way to end basically any game after all. And don’t get me started on what happens if you give this lad double strike. 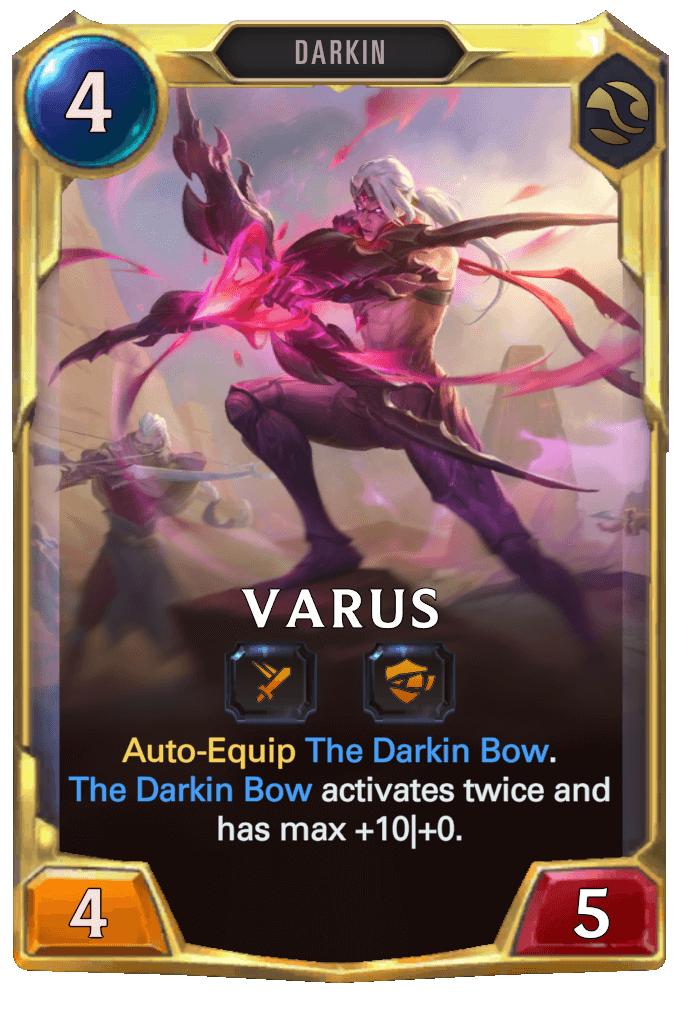 Last but not least the Darkin champion spells are a big deal because you’ll see them significantly more often than any other champion spell.

Chain of Corruption is highly mana intensive, but can allow you to dictate an entire combat at burst speed. 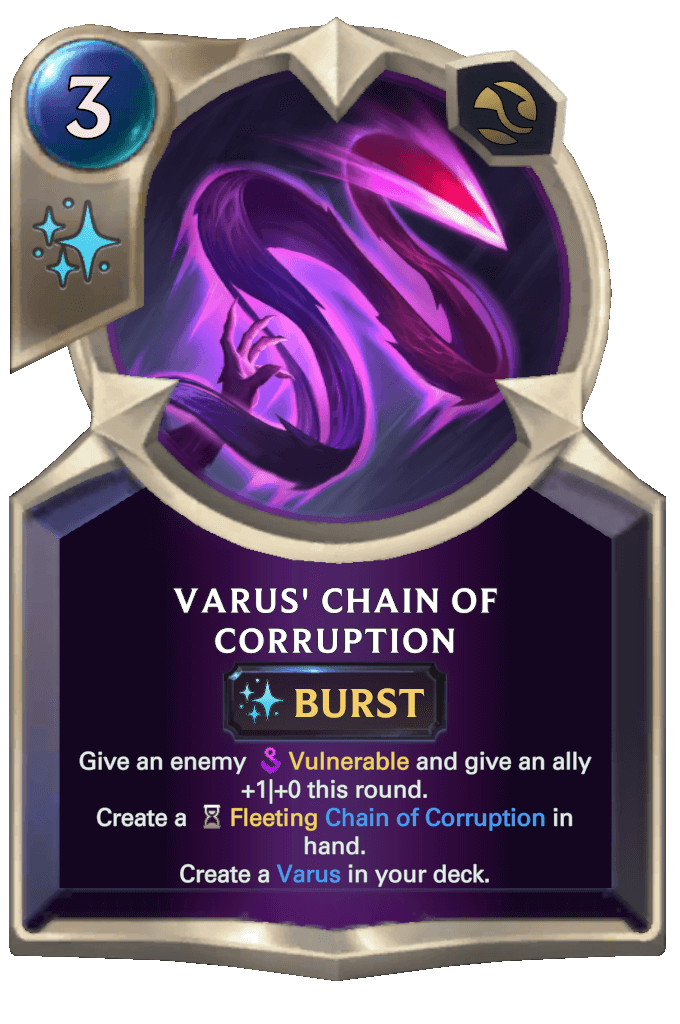 This will lead to some nasty blowouts that I am definitely going to brew. 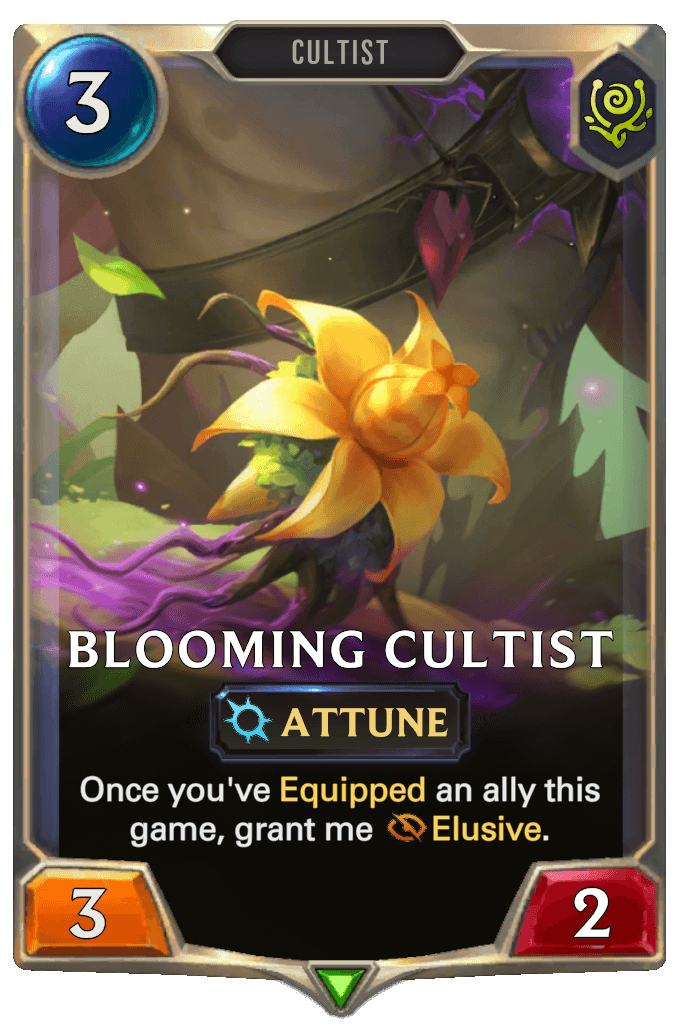 Effectively a two mana 3/2 elusive that can’t be played until turn three or four is an interesting stat line to be sure. I suspect this will see play in cultist-based decks simply as a solid activator and a way to push lethal attacks with equipment later in the game.

I don’t know if the effect it has on its own will let it make leaps outside of that archetype, but I could potentially see a bandle elusive aggro deck wanting something like this.

It’s not quite decimate-fishy, but it’s doing its best impression. Fervor-Fern perhaps? 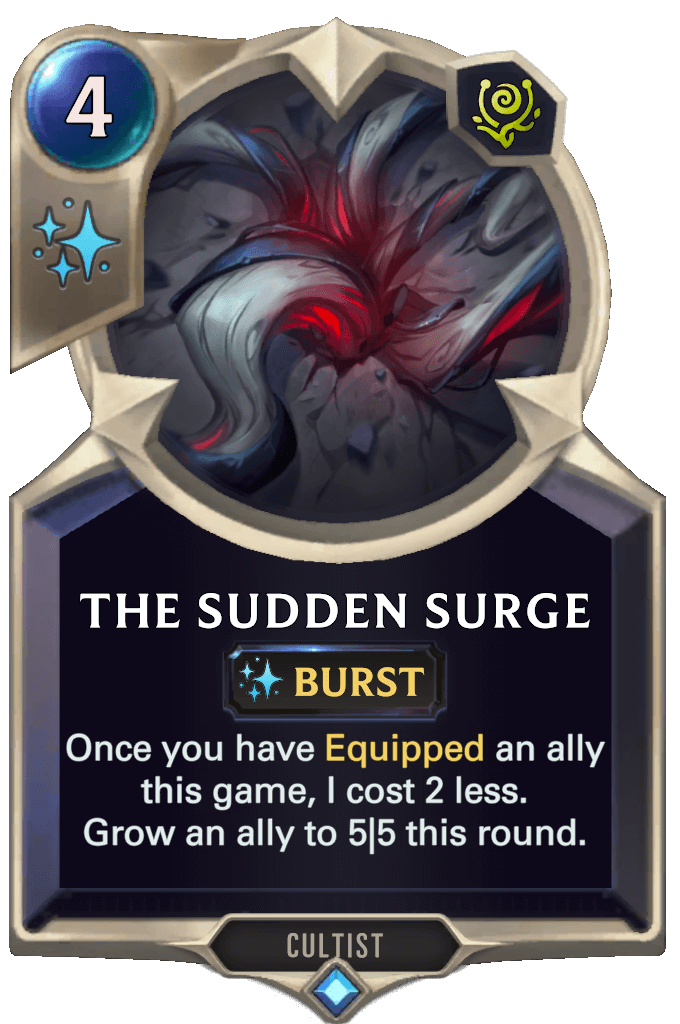 This one on the other hand is absolutely nutso-busted and will be a meta-defining card in whatever deck can play it.

At four mana this can still be a brutal combat trick. When you set it down to two it will simply become impossible to play around and smash opponent’s board and life totals at will. 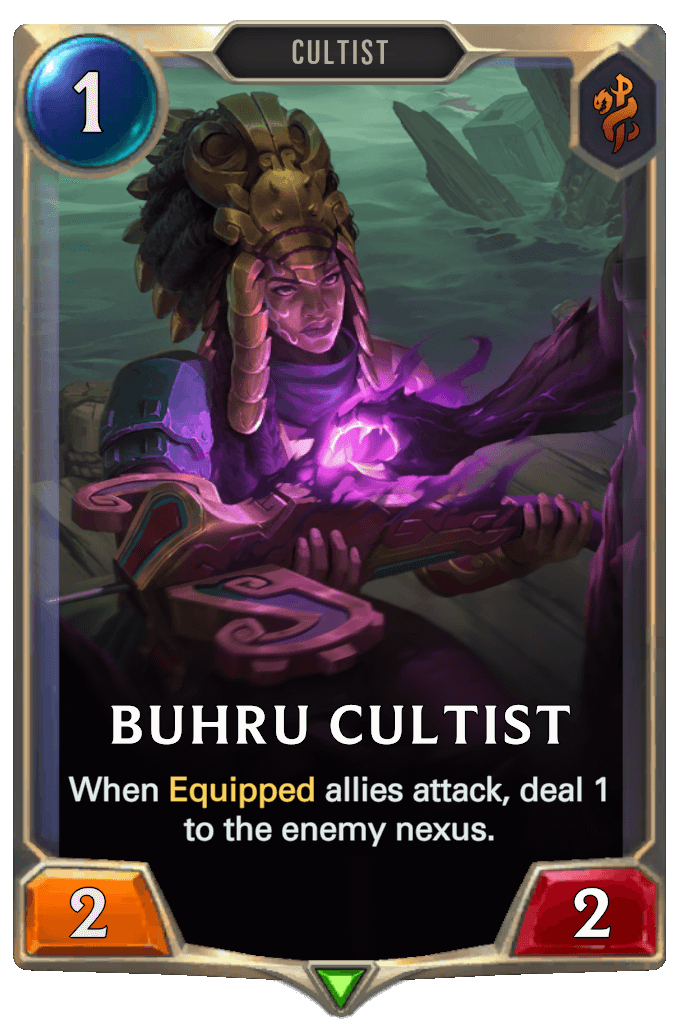 Another card that will be an absolute staple in cultist decks. Early defense or pressure as needed combined with later in the game burn out potential is a top tier one drop.

The question then becomes if it is powerful enough to see play in other aggressive archetypes.

My gut says no, because most super low to the ground decks don’t really want to take the time off necessary to equip up their units.

But that said Ionian Hookmaster is a premium two drop, and a floor of a one mana 2/2 is quite solid. I would not be surprised to see these taking up the coveted one mana slot. 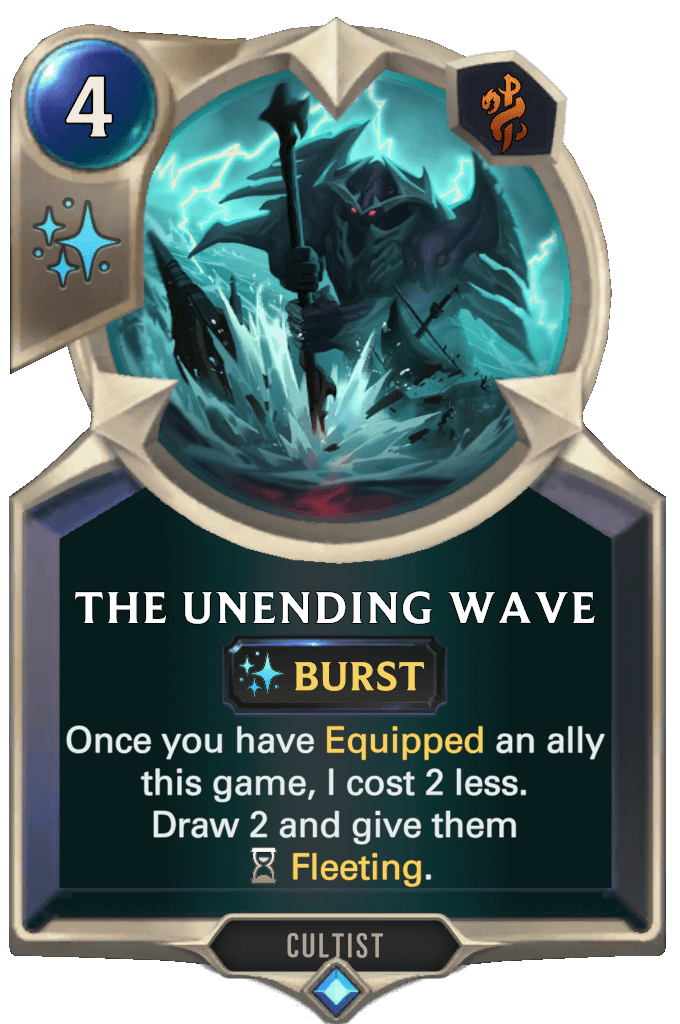 What? Just… what???? I know as a writer I’m contractually obligated not to be speechless but come on folks. This is a card that is clearly and brutally busted with both Twisted Fate and Nami. You know, two of the already most top tier champions we have in this game that dominate formats at the drop of a hat?

I mean, I love the Mordekaiser Artwork and I’m looking forward to seeing my boy crush some heads, but I’m getting Twisted Fate/Fizz flashbacks here. Hopefully I’m wrong and the fleeting clause will be enough to keep this monster in check, but I’m not betting on it. 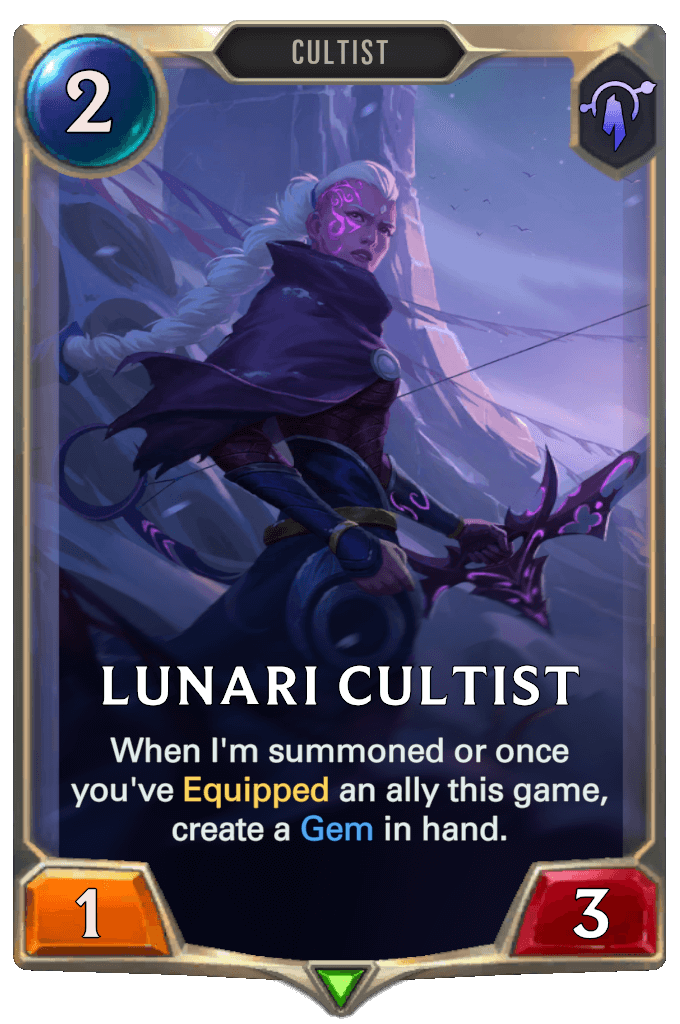 A two mana 1/3 that effectively makes two gems on summon is potentially a pretty premium package. As a long time Mountain Goat Afficionado this will compete heavily for that slot. I don’t know which we’ll end up running or if it will be a split, but this is definitely going to give the goat a run for its money. 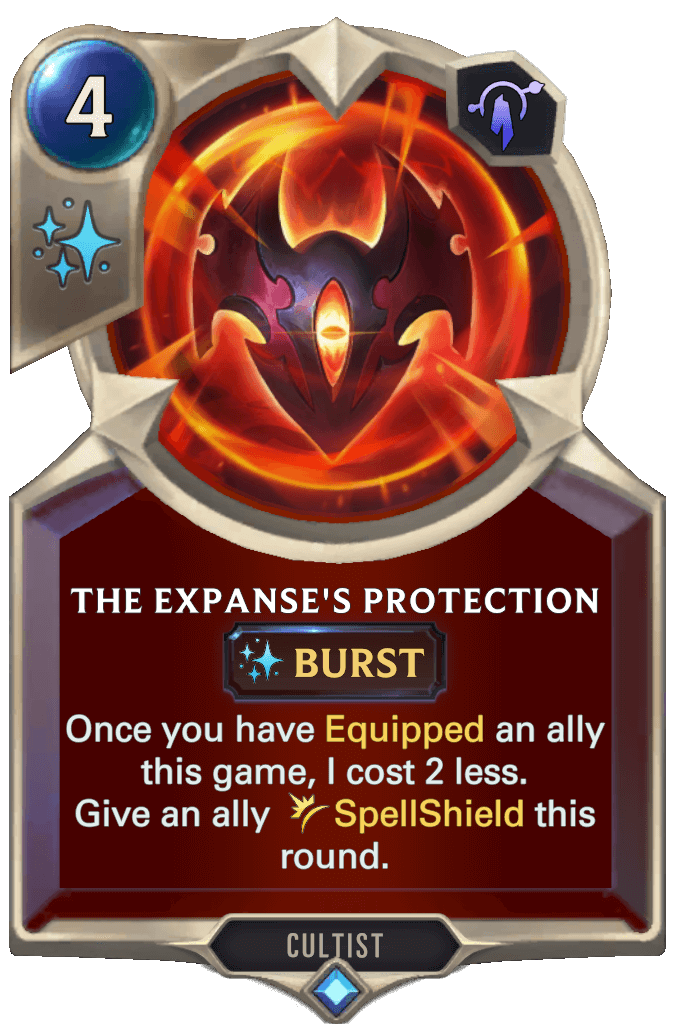 Um, I guess this is “You don’t get to play around tricks anymore,” the expansion? I’m not going to lie between this and The Sudden Surge my control player instincts are yelling at me to run and hide. If my opponent is holding up two mana both Mystic Shot and Vengeance are off the table? Send help. 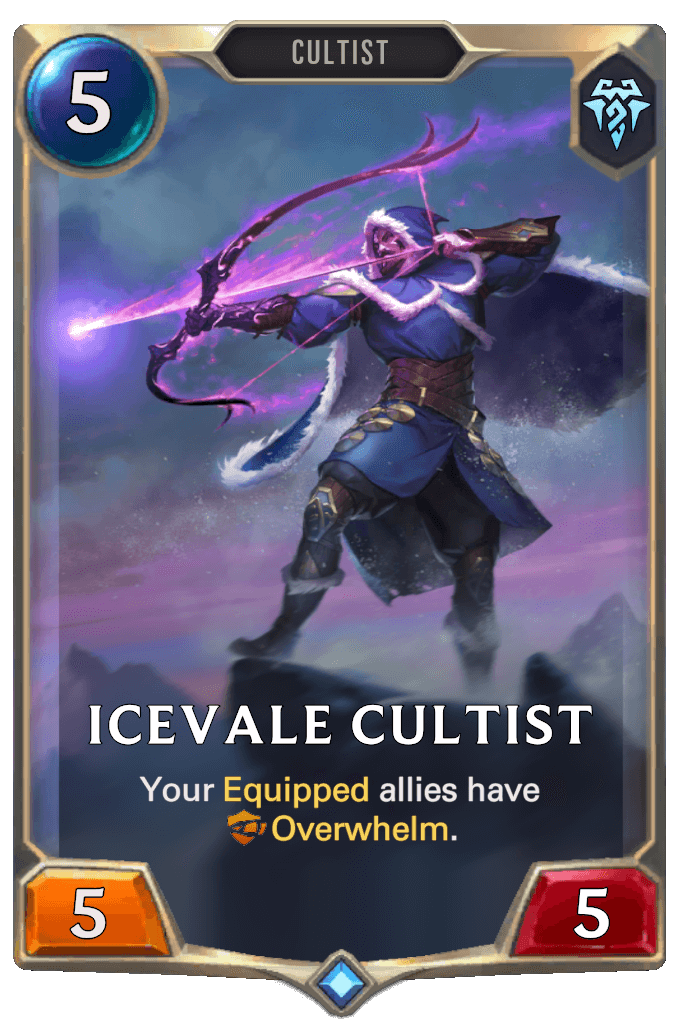 This says it’s a cultist, but it reads like the Ornn support that we’ve all been waiting for. I’m not sure if this will be enough to take the big seven drop into the competitive realm, but guaranteeing that he has overwhelm before needing to level is a pretty powerful step. Five mana 5/5 aint the worst thing either. 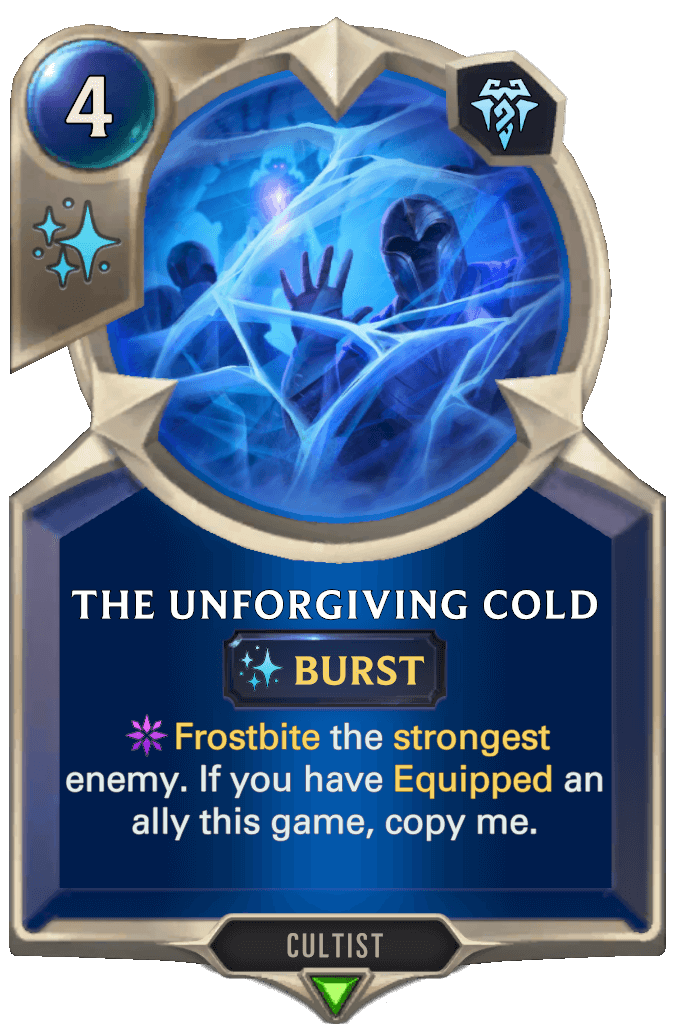 Basically, just four mana Harsh Winds in most scenarios? There’ll obviously be some spots where you wish you could freeze a smaller unit *cough* Teemo *cough* but as a general rule this is another pretty power combat trick for the cultist archetypes.

Remember how I said playing Varus and Kayne together was going to be too restrictive? Well, the more I read through this spoiler the more I think that might have been just a touch on the “judging a book by its cover” side of things. This is quickly moving towards “we’re at least going to have to test this.” 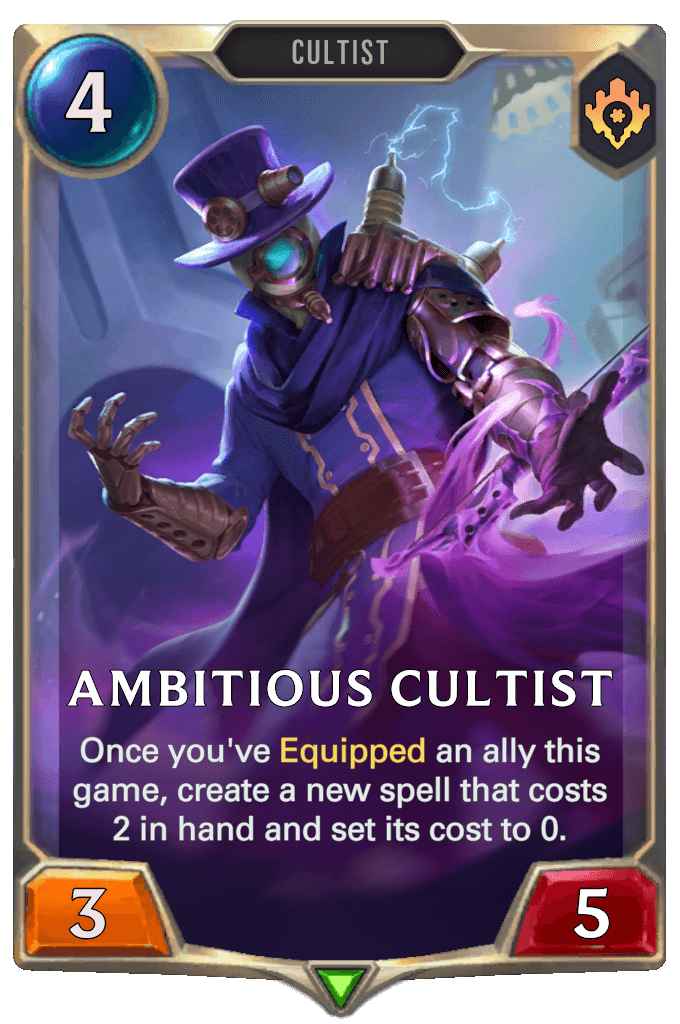 As anyone who has played with Shen knows, a four mana 3/5 is a pretty solid way to shut down an early to mid-game board.

This will add a small but potentially powerful spell on top of that. Honestly feels like a high-power midrange value unit in any deck that wants that kind of thing, cultist or no. 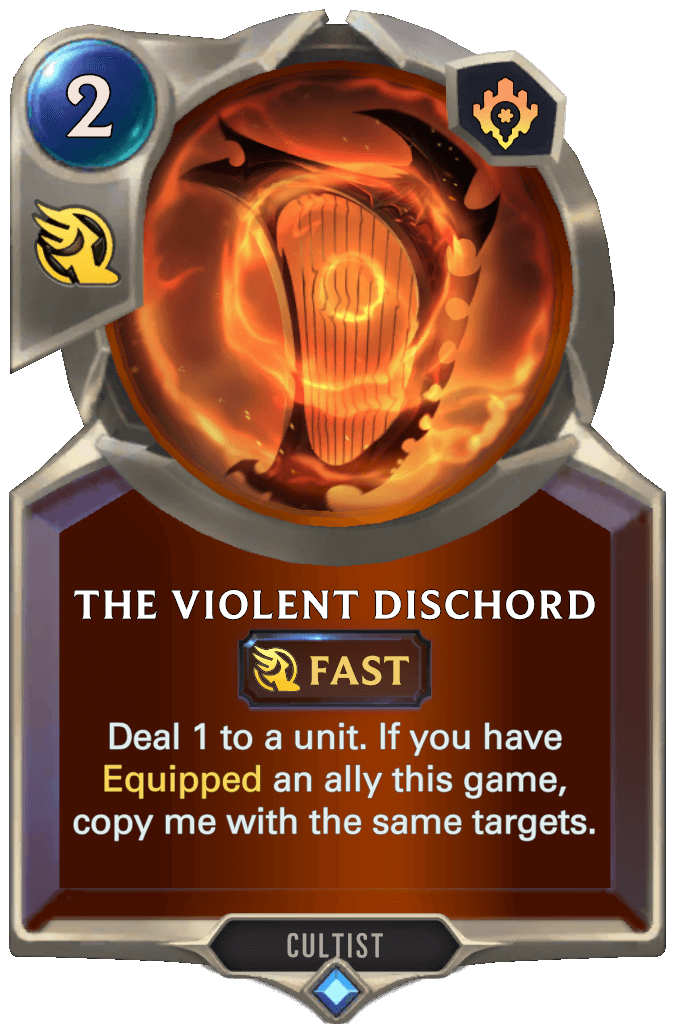 Powered down Mystic Shot here is clearly signaling that we are going to get some more love for Fun Smith style archetypes in the future. This isn’t much to look at on its own, but with a single boost it’ll shoot for four at fast speed. Pretty nasty. 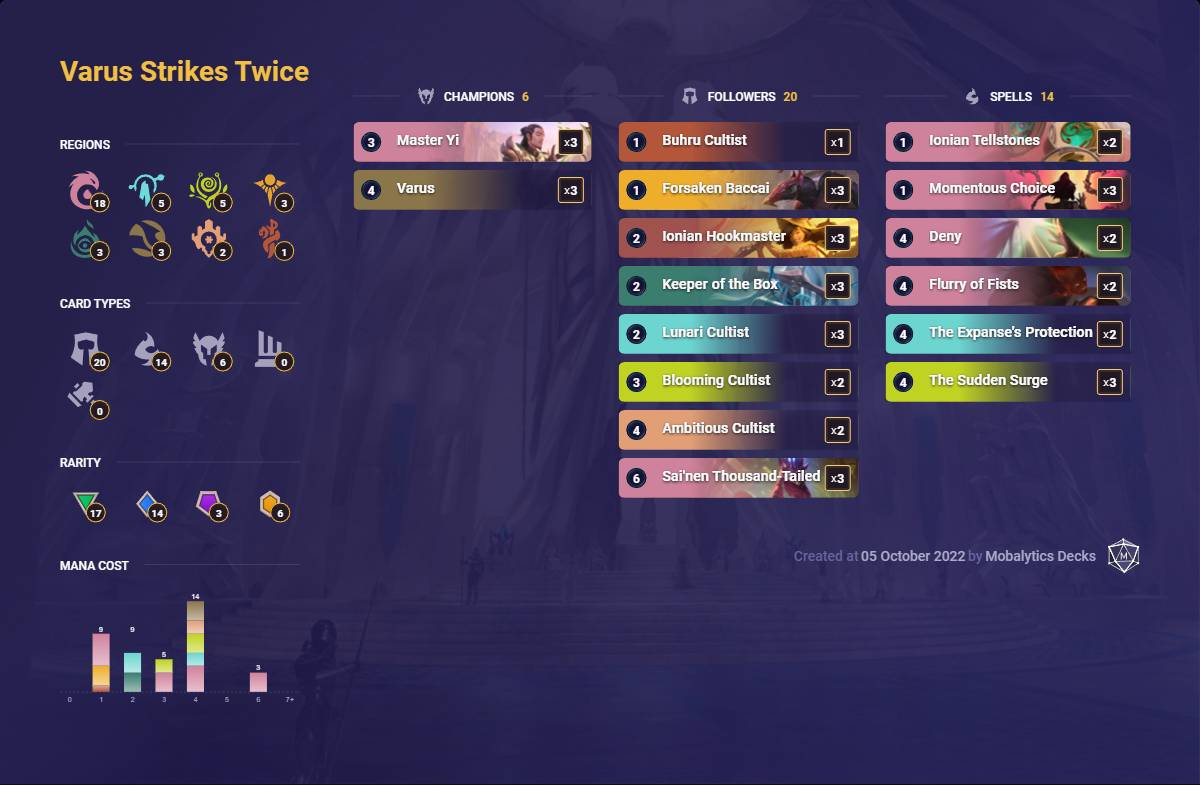 You know what’s better than attacking your opponent for fourteen points of Overwhelm damage? That’s right, attacking for thirty. A fully charged up Varus flurrying his fists will simply lay waste to anything that stands between him and your opponent’s nexus absolutely imploding on itself.

Though to be fair this is under the assumption that the bow will keep its buff through the first half of double attack. We’ll have to see exactly how this interaction works before we confirm the otk as real, but even without it there’s some powerful midrange options here.

We do need quite a few targets to level Varus, but Momentous Choice and Lunari Cultist should be able to help us out with that. Backup dance Master Yi is here as our secondary win condition and to make our already inexpensive interaction that much more ridiculous.

And just in case drawing our main win condition for free wasn’t enough card advantage Sai’Nen has our back on the top end. This looks dreadfully unrefined from where I’m sitting right now, but the bones of something gruesomely powerful are here. The “to test” list for the new Darkin saga begins to form. Are you ready?