Hey everyone, Kuvi here, for the fourth day of the new expansion Domination. 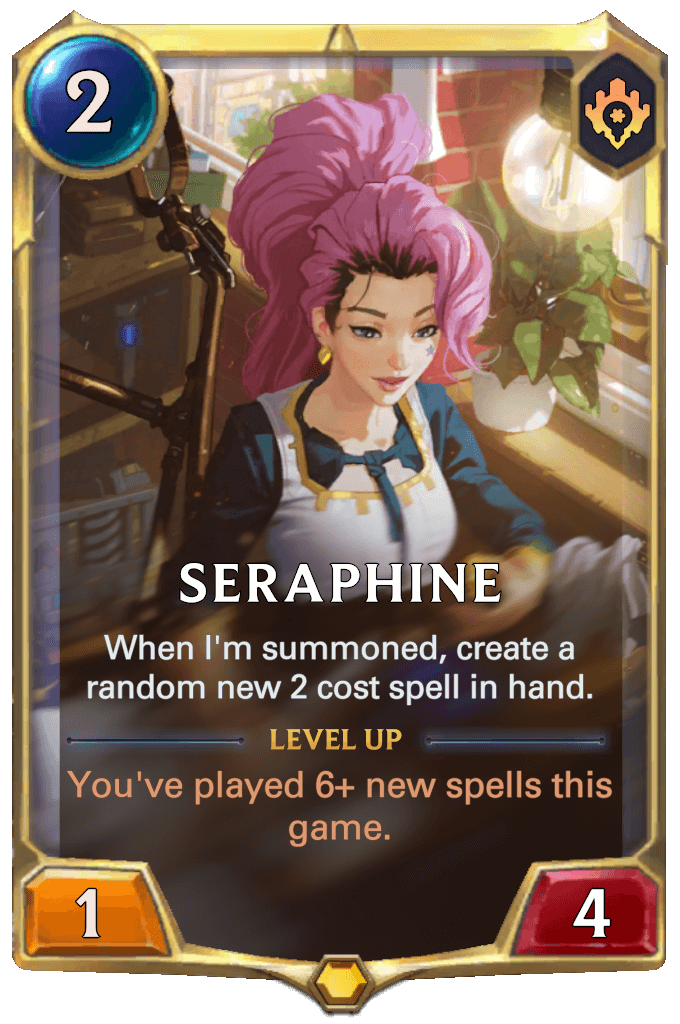 Tying together the Flow package, Seraphine is a 2 mana 1|4 that creates a random new 2 cost spell in hand on summon. A new spell is a spell you have not played this game. She levels up when you’ve played 6 or more new spells in a game. When leveled, Seraphine also copies new spells you play that cost 2 or less, making her a baby Karma, of sorts. 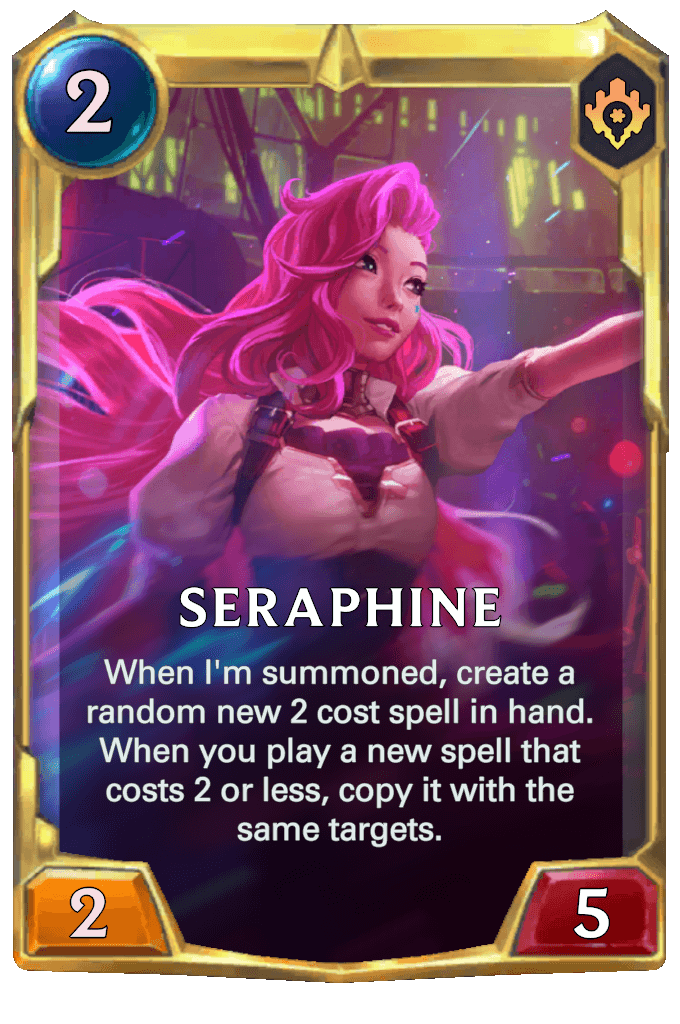 Seraphine’s spell creation is not region restricted, which means you can create a 2 cost spell from any region in the game. This will undoubtedly lead to some pretty crazy moments with some more of that PnZ randomness. With her general spell creation and duplication, Seraphine seems like a very flexible Champion that could fit in a variety of regions and decks. 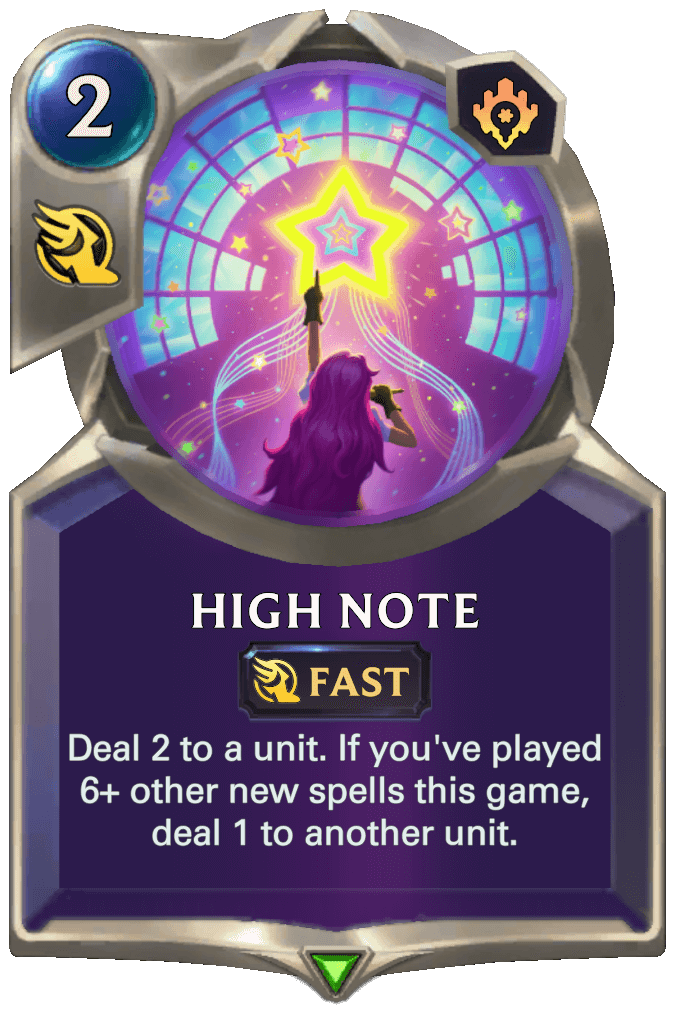 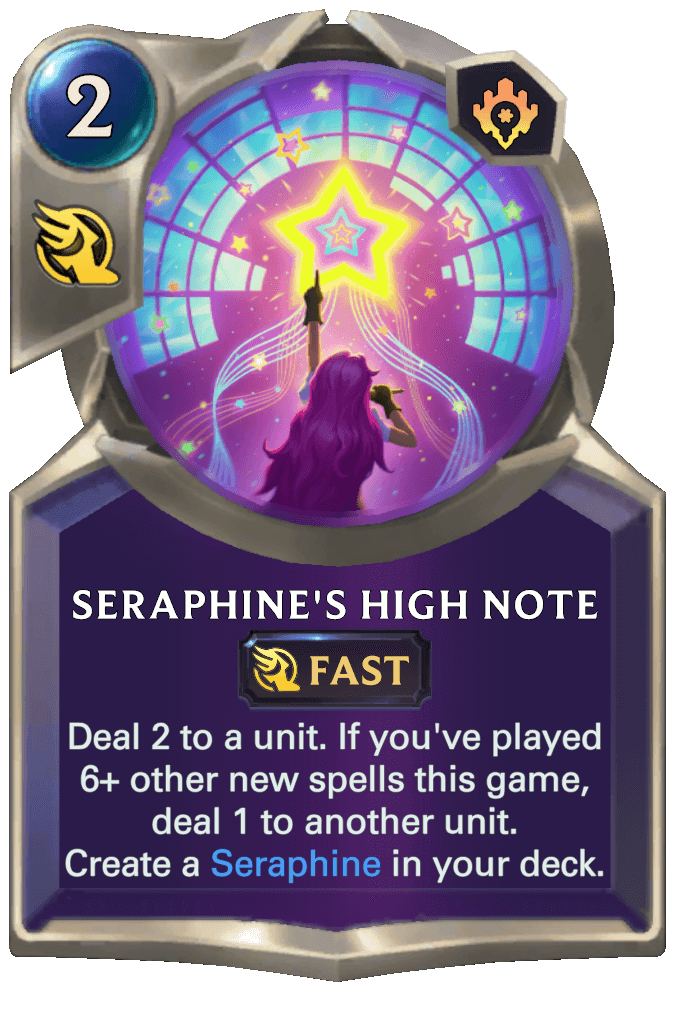 High Note, Seraphine’s Champion spell, is a 2 mana fast speed spell that deals 2 damage to a unit and 1 damage to another if you’ve played 6 or more new spells that game. This spell is similar to Mystic Shot, with a bit less general flexibility not being able to target the Nexus, but a bonus after you’ve leveled Seraphine.

High Note works especially well with Seraphine’s level 2 if you haven’t played a High Note already that game, making it a great Champion spell for her to have. 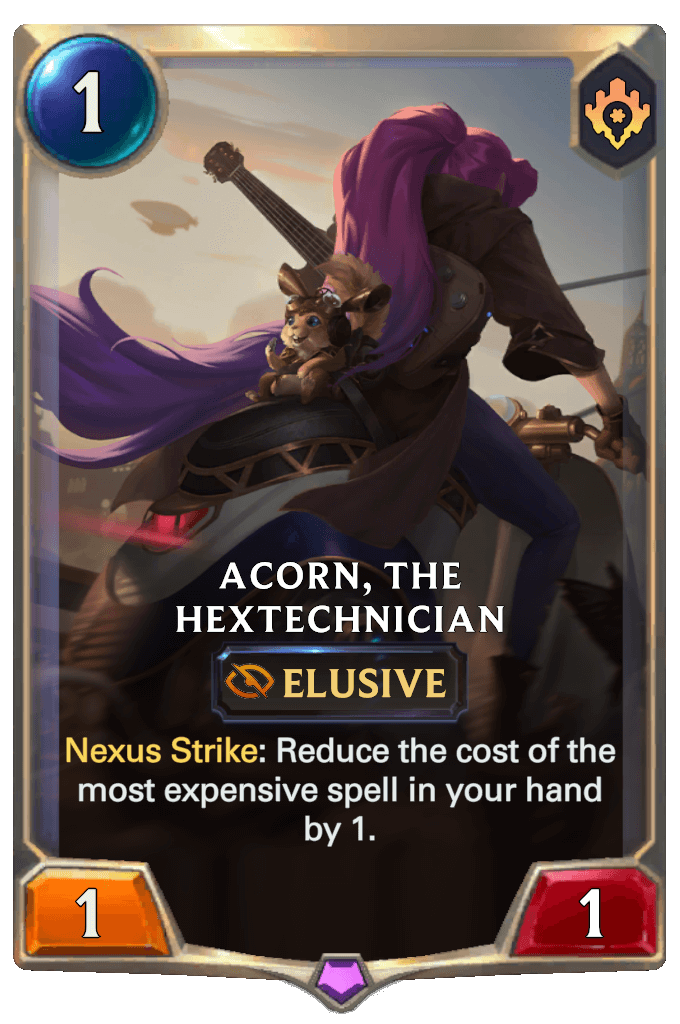 Acorn, the Hextechnician is a 1 mana 1|1 Elusive from PnZ that reduces the cost of your most expensive spell in hand by 1 on Nexus Strike.

Like other 1 mana 1|1 Elusives with value effects, you’ll find it hard to trade down with this card, as it can generate a significant amount of value if left unchecked.

It’s a good way to start discounting spells early for Seraphine and to enable Flow later on.

This card can also be used to play expensive spells sooner than you’d otherwise be able to, which I could see working well with cards like Feel the Rust or Glorious Evolution. 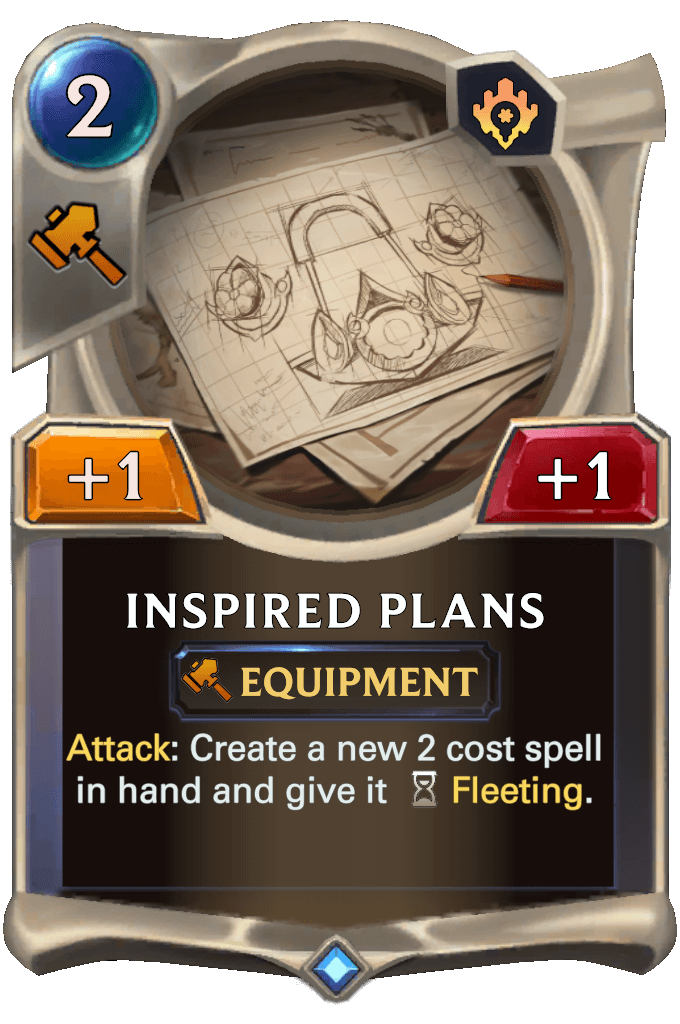 Inspired Plans is a 2 mana +1|+1 Equipment from PnZ that generates a new Fleeting 2 cost spell in hand on Attack. This card has a lot of variance because it’s an Attack effect, making the difference between creating a slow or focus spell you can’t use until after combat or a fast or burst spell you can use during combat can be pretty large. This card can still generate repeated value and create some crazy moments, so I’m looking forward to seeing what people do with it. 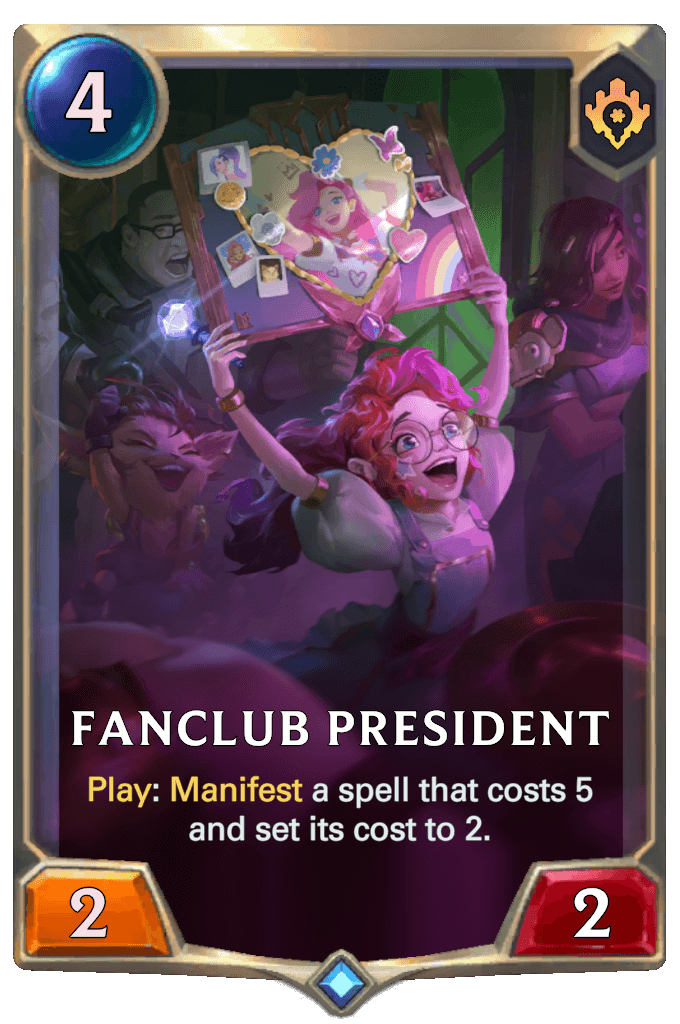 Fanclub President is a 4 mana 2|2 from PnZ that manifests a 5 mana spell on play and sets its cost to 2. Effectively discounting a spell you manifest by 3 is incredibly powerful. Potentially having access to cards like 2 mana Harsh Winds, Entomb, or Concerted Strike, this card will consistently create unexpected blowouts and turn the tides of games.

It’s an amazing card that pushes the PnZ Flow package up with it, and I expect this card to easily become a PnZ region staple. 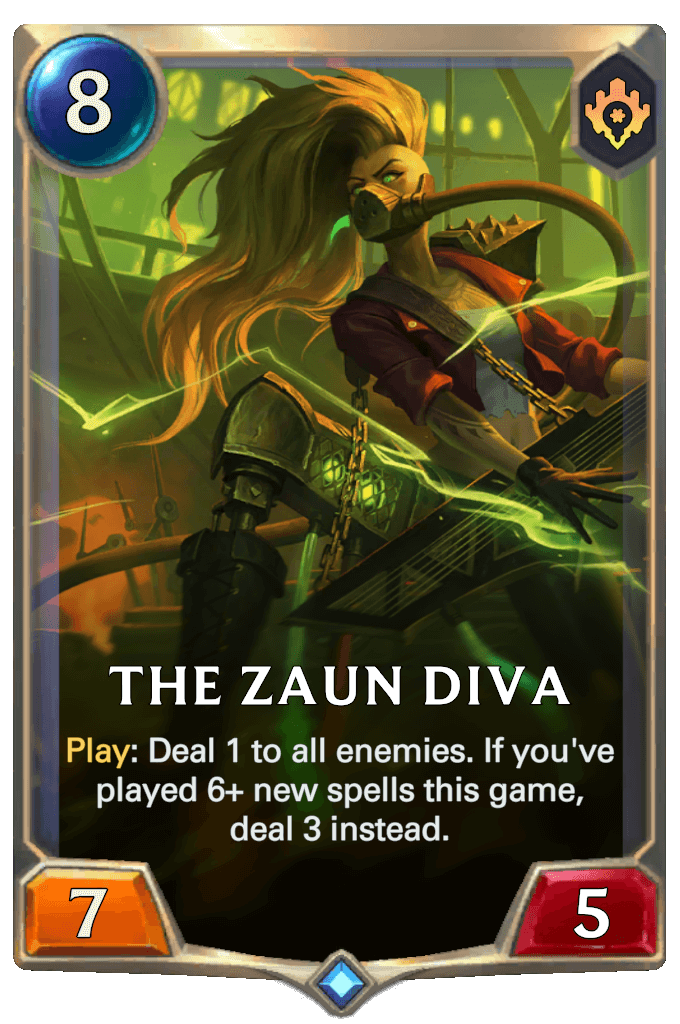 The Zaun Diva is a 8 mana 7|5 from PnZ that deals 1 to all enemies, or 3 to all enemies if you’ve played 6 or more new spells that game. You will primarily be seeing this card in spell decks so expect its relatively easy condition to be met by the turn this comes down. This card offers some board clear and finishing potential for the Flow and new spell archetypes.

The Zaun Diva works well with Back Alley Barkeep particularly well, as it also allows you to play her a turn early and curve rather nicely. 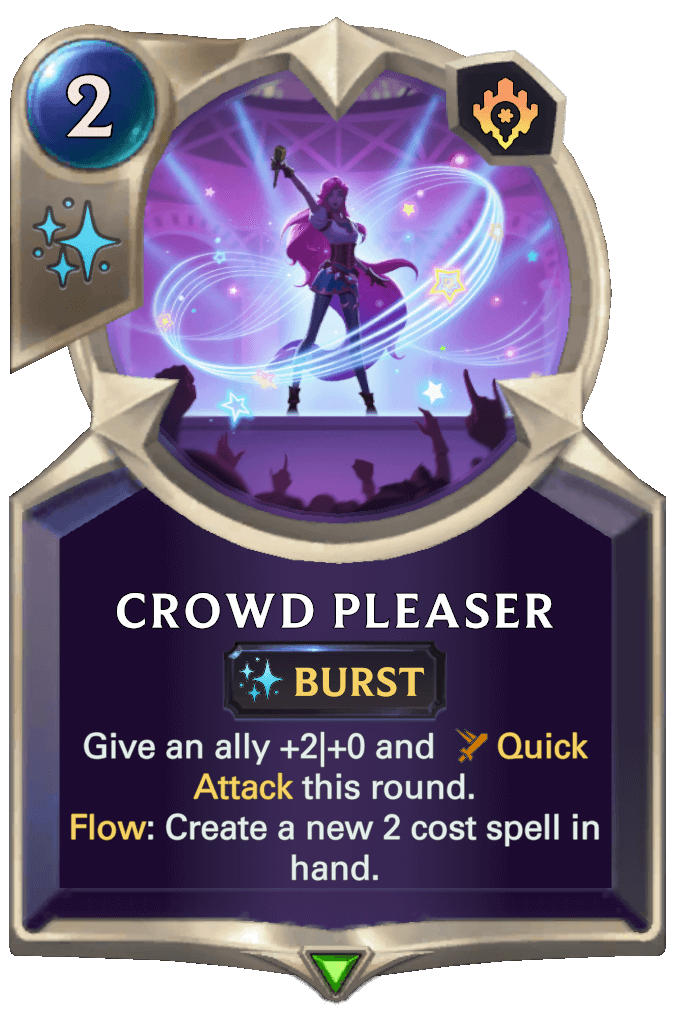 Crowd Pleaser is a 2 mana burst speed spell from PnZ that gives an ally +2|+0 and Quick Attack for the turn. If you have Flow active it also creates a new random 2 cost spell in hand. This card is a decent combat trick that also gives some value back in Flow decks and pushes their game plan forward, offering 2 different 2 cost spells in one card. 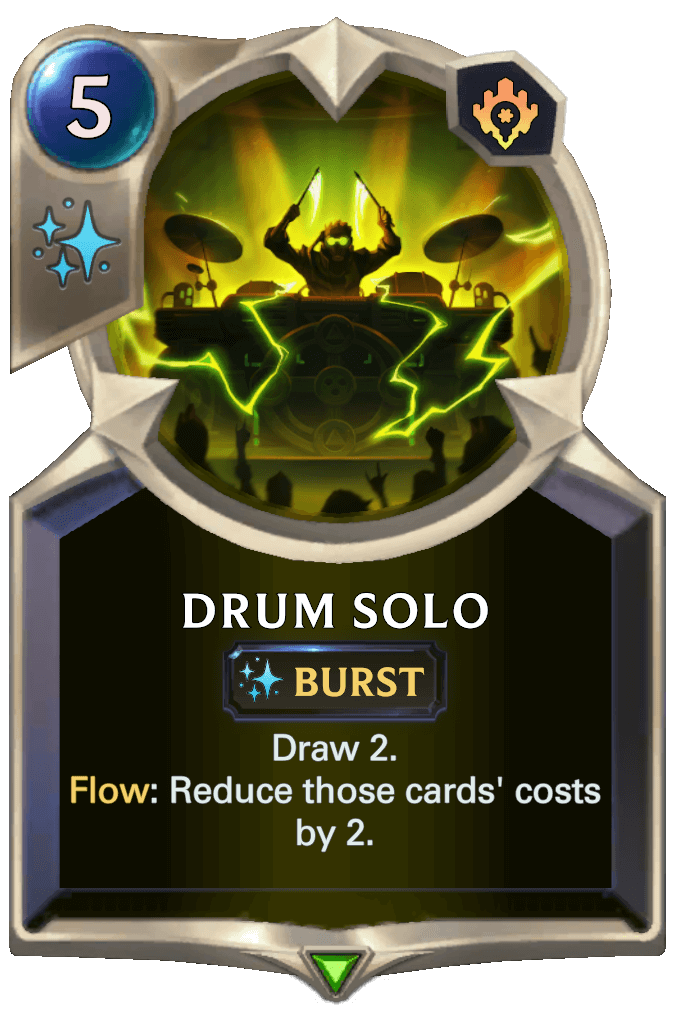 Drum Solo is a 5 mana burst speed spell from PnZ that draw 2 cards. If you have Flow, it reduces the cost of both cards by 2. With Flow this card discounts 4 total mana from the cards drawn, making its net cost only 1 mana. This might just be the new best draw spell in the game.

On top of the incredible value this card offers, it also allows you to play cards up to 2 turns sooner than you’d otherwise be able to, enabling lots of interesting combos that I’m excited to see.

I hope you guys liked this card reveals analysis article, my DMS are always open if anyone wants to discuss what’s written in this article or anything LoR related! 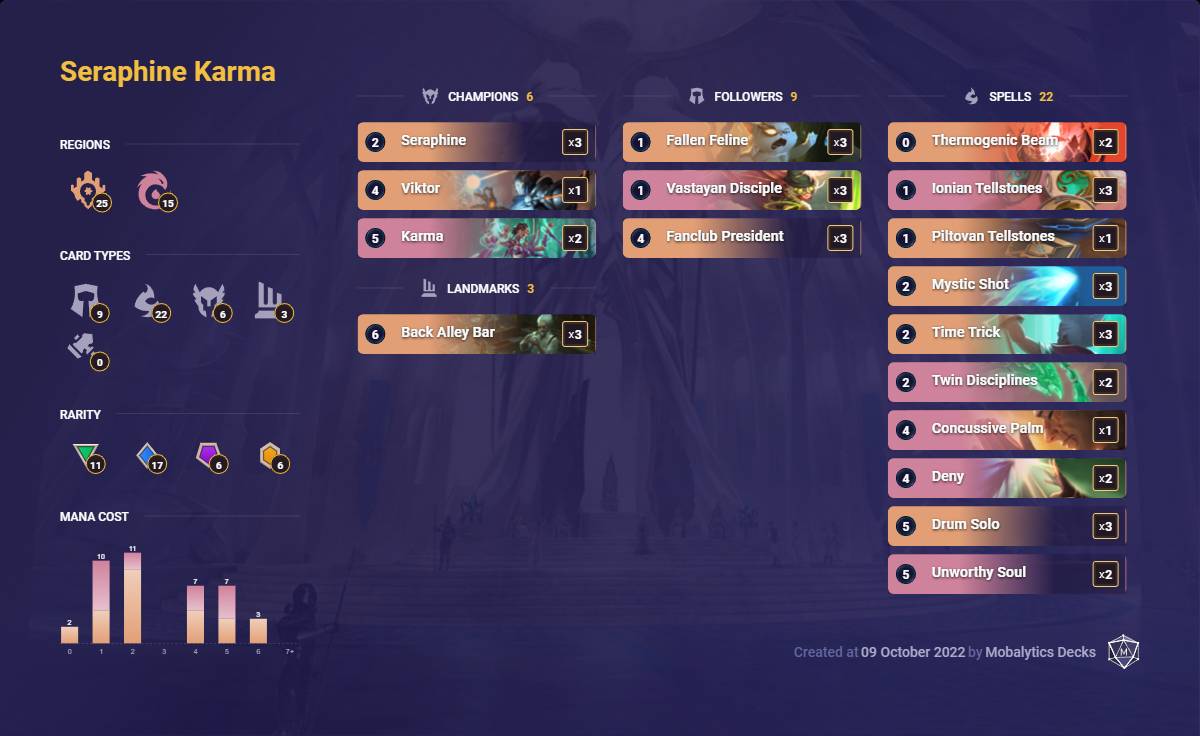 Using PnZ and Ionia control tools and activating Flow, this deck is meant to stall and outvalue out opponent until it’s our turn, when we pop off, doubling or even tripling our discounted spells and destroying our enemy with Hexite Crystals and more.

This deck should be really good against control archetypes like Karma Master Yi since we outvalue and outtempo in the late game while denying their gameplan.

It’s also fairly strong against midrange decks like Fiora Pantheon because of the efficient disruption like recalls, mystic, etc…

On top of being able to slow midrange down enough to be able to make it into the later stages of the game. Unfortunately, aggro will most likely be a pretty big weakness for this deck.