Today we’ve got a handful of support cards for Shadow Isles and Shurima! 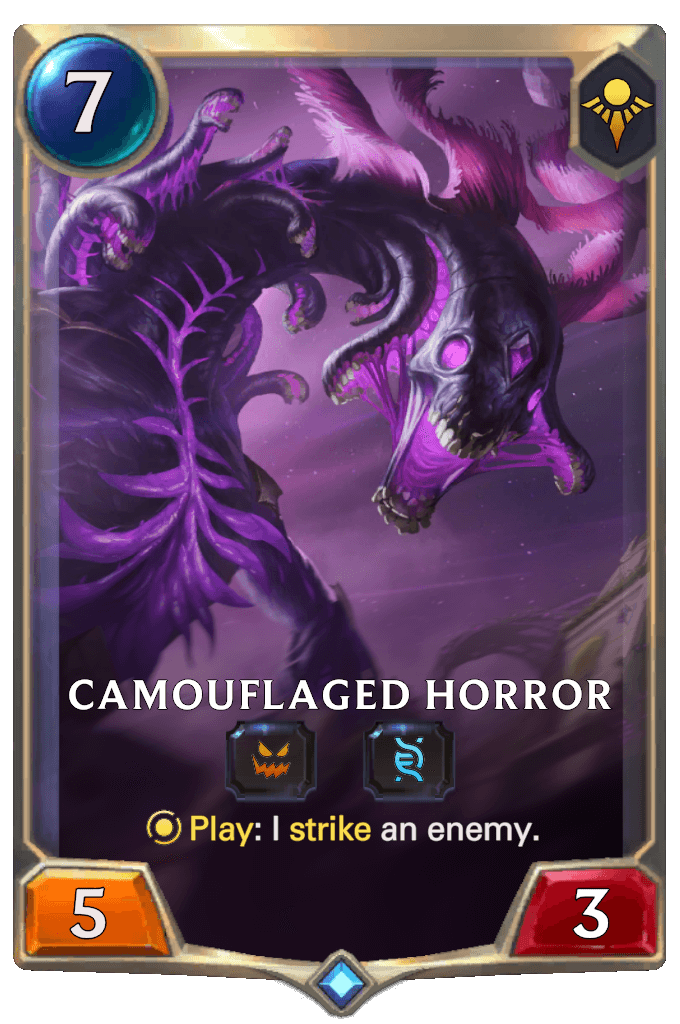 Seven mana is a lot these days, but Camouflaged Horror presents a payoff that’s well worth the investment. It comes down and strikes an enemy for seven, while also leaving a 7/5 Fearsome body on board. It’s almost like a bigger Riptide Sermon, unless things don’t go as planned..

The big downside is that it’s counterable. While it may not be easy to deal five damage at fast speed, having this card eat a Vengeance isn’t going to feel great.. And what’s even worse is getting bounced by a Homecoming!

Evolve also comes with a deck building cost, and playing this as a 5/3 is awful. There’s potential we see this as a one or two-of in a Midrange Evolve list, but it’s really going to depend on how the meta shapes up. If Ionia remains king, Camouflaged Horror will remain unseen.

Curse of the Tomb 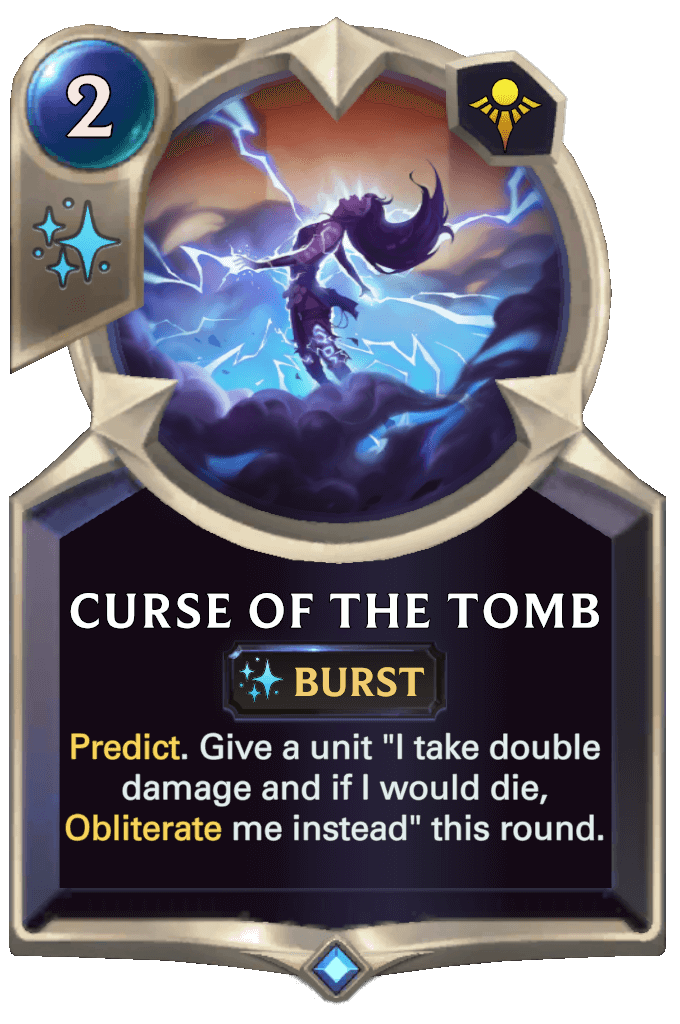 This is a pretty strange spell for Shurima. In a way it feels similar to Disintegrate, except it’s stuck in a region with a huge lack of damage spells. Shurima succeeds best in combat by taking advantage of vulnerable enemies. Sure you can double up the damage and trade up, but at best you two for one yourself.. And at worst, you get completely blown out!

Disintegrate’s advantage is that it can be combined with cheap spells to deal with just about anything. That’s not often the case for Curse of the Tomb.

At the very least it does add another Predict spell into the pool, but I really can’t see this making sense in any deck.

The Altar of Blood 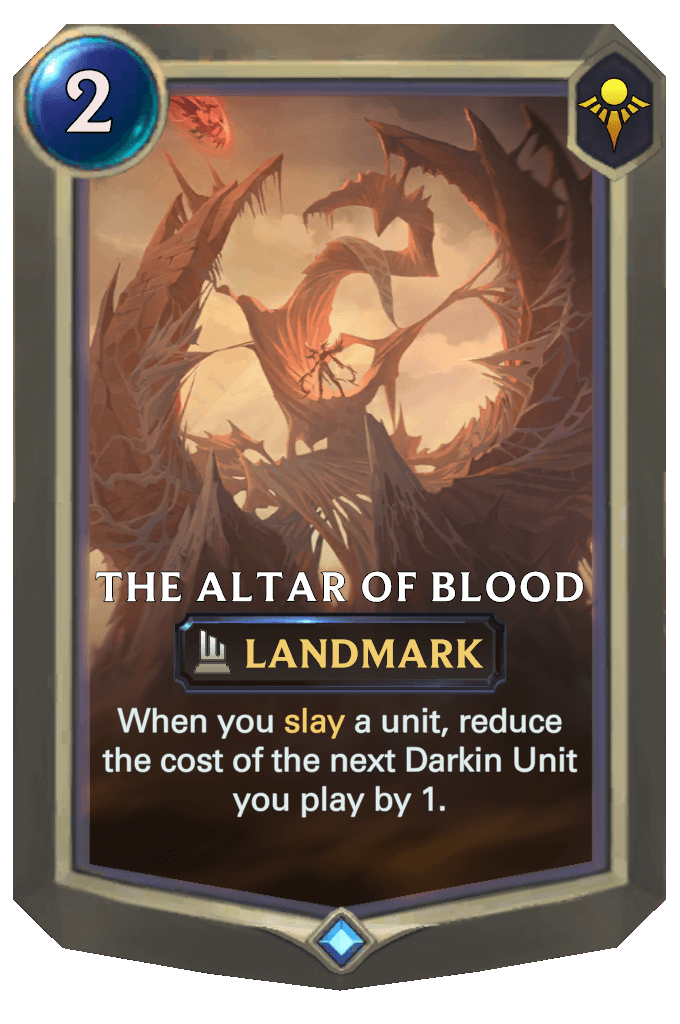 This looks like a fun build-around card that aims to cheat out a big Darkin a few turns earlier. Shurima does play well with the Slay archetype, and combined with Shadow Isles it’s possible to build up triggers quite quickly.

However, taking off turn two in order to set this up is a real cost, especially when we need to develop units early to start the slaying spree. I don’t expect we’ll see much of this, but it’ll definitely be a fun concept to experiment with! 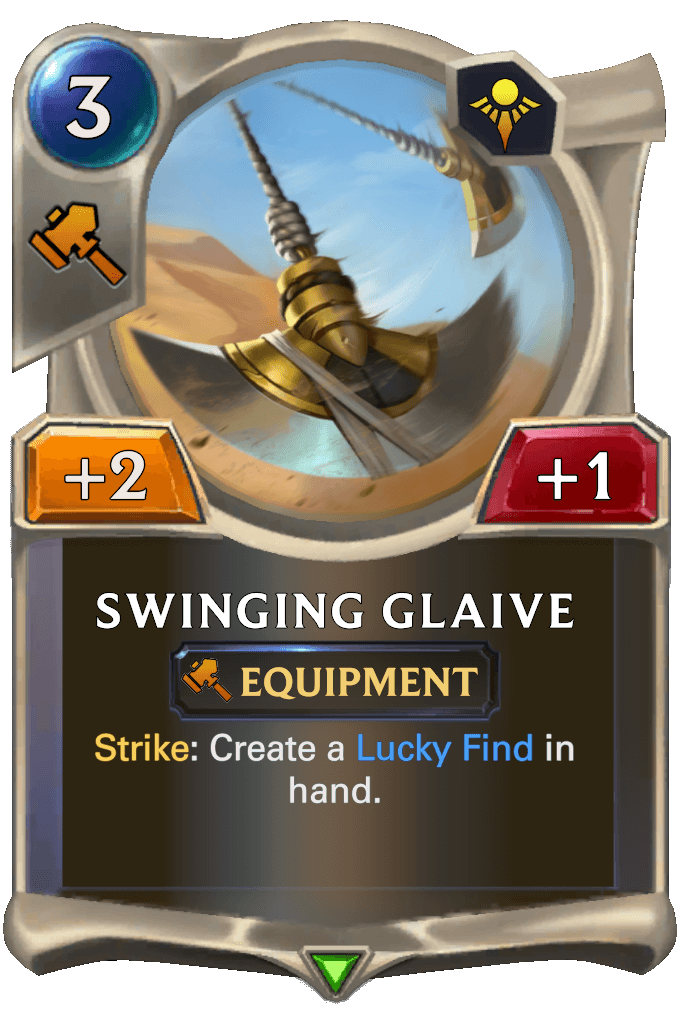 I haven’t been the biggest fan of equipment, and they’ve kinda played out to my expectations since their release. Of course cards like Bloodletters and Lodestone are great, alongside the Improvise staple; Hookmaster. Cost matters a lot, and that’s why most others haven’t seen success.

Swinging Glaive is no different. While generating Lucky Finds on strike is nice, three mana is just too much of an investment, especially considering the payoff isn’t guaranteed. If this were to trigger upon attack I would maybe consider it, but as it stands, it feels a bit weak. 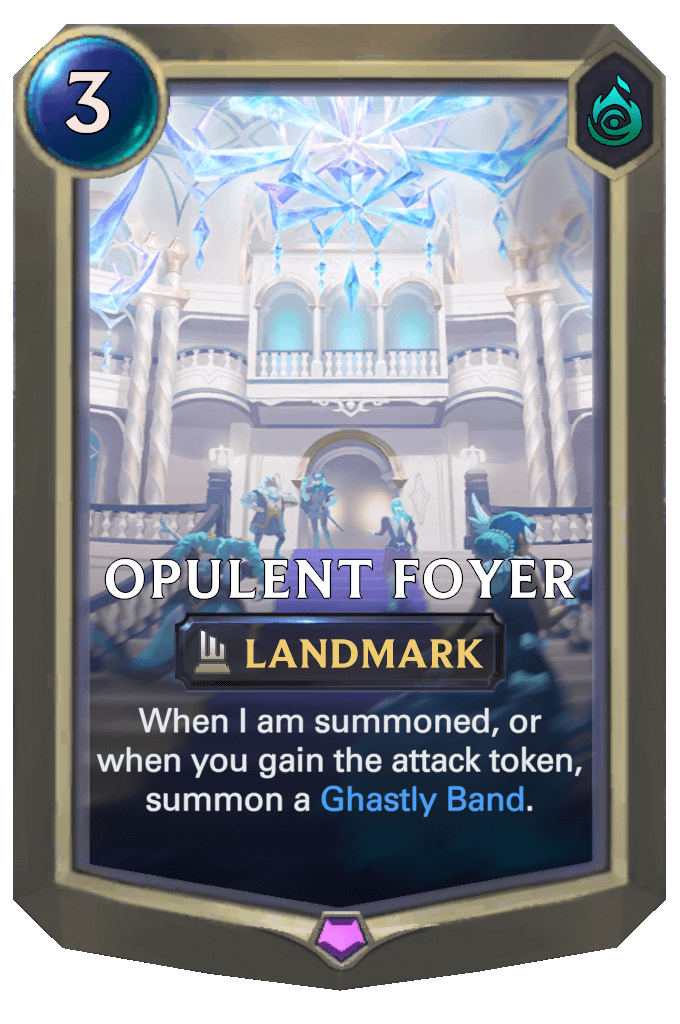 If you ever wanted a more consistent way to build up Hallowed triggers, now you’ve got it! Opulent Foyer actually looks pretty reasonable. While three mana landmarks are often pretty bad, we can sort of compare this to God-Willow Seedling in terms of tempo. It may not represent the same level of defensive threat, but summoning any Ephemeral unit is often enough to help halt an attack.

This also fits perfectly with Katarina as we’re able to gain attack tokens on the opponent’s offensive turn. This forces them to open attack, or else it opens a window for us to play Katarina and summon a Ghastly Band on the same action.

Gwen Katarina has been a solid deck for a while and it always lacked a proactive 3-drop outside of Katarina. Opulent Foyer may just be the perfect fit. 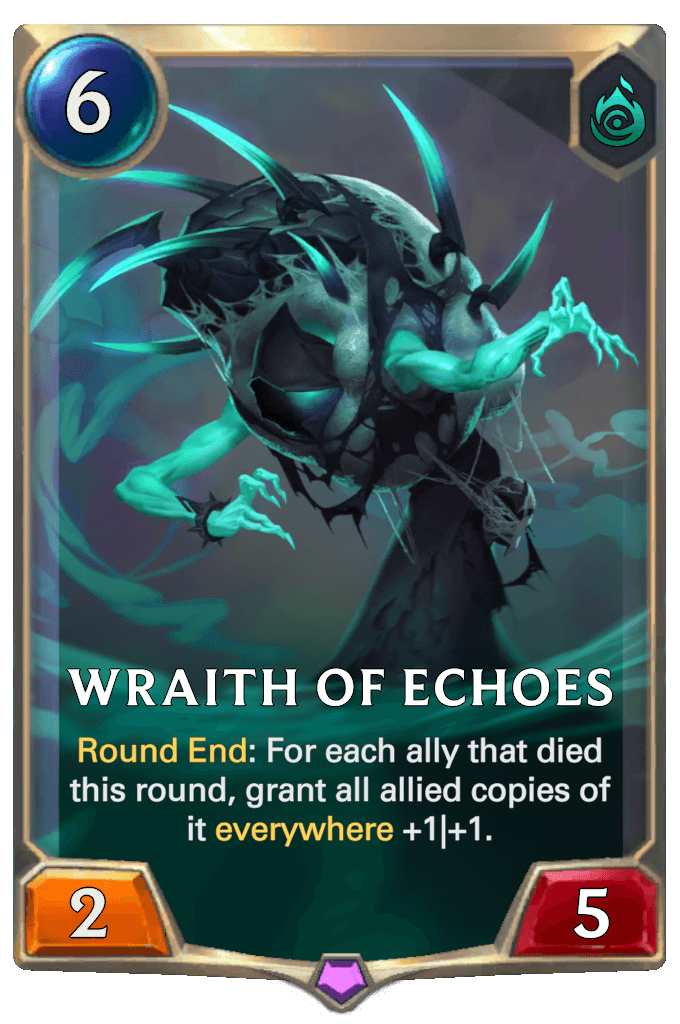 We’re definitely in meme territory with this one. It’s pretty hard to justify playing a six mana 2/5 that doesn’t actually do anything the turn you play it. Even if you’re able to trigger its Round End effect, the benefit only applies if you have additional copies of the card readily available.

That said, it’s got some hilarious applications with Minion. Perhaps this will birth the true Minion OTK deck!? 😉 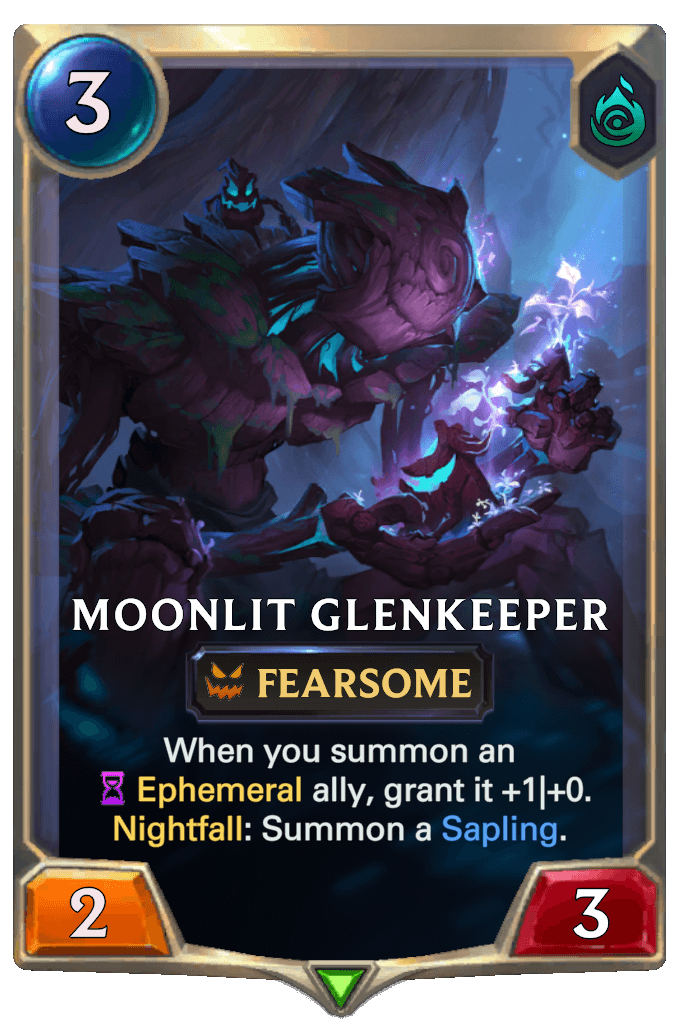 Moonlit Glenkeeper feels like Nightfall’s version of Blighted Caretaker, except instead of two Saplings, we get one 3/1 Sapling. While a 2/3 Fearsome for three is pretty awful, the 3/1 Sapling can force a very favorable exchange.

It’s a great card against other unit based decks such as Demacia, but will fare poorly into control decks or those with access to cheap pings. It’s an ‘A’ in some situations and an ‘F’ in others, so because of this, it may only make the cut in small numbers (or not at all).

However, be prepared as its another notable card added to the Unspeakable Horror pool. 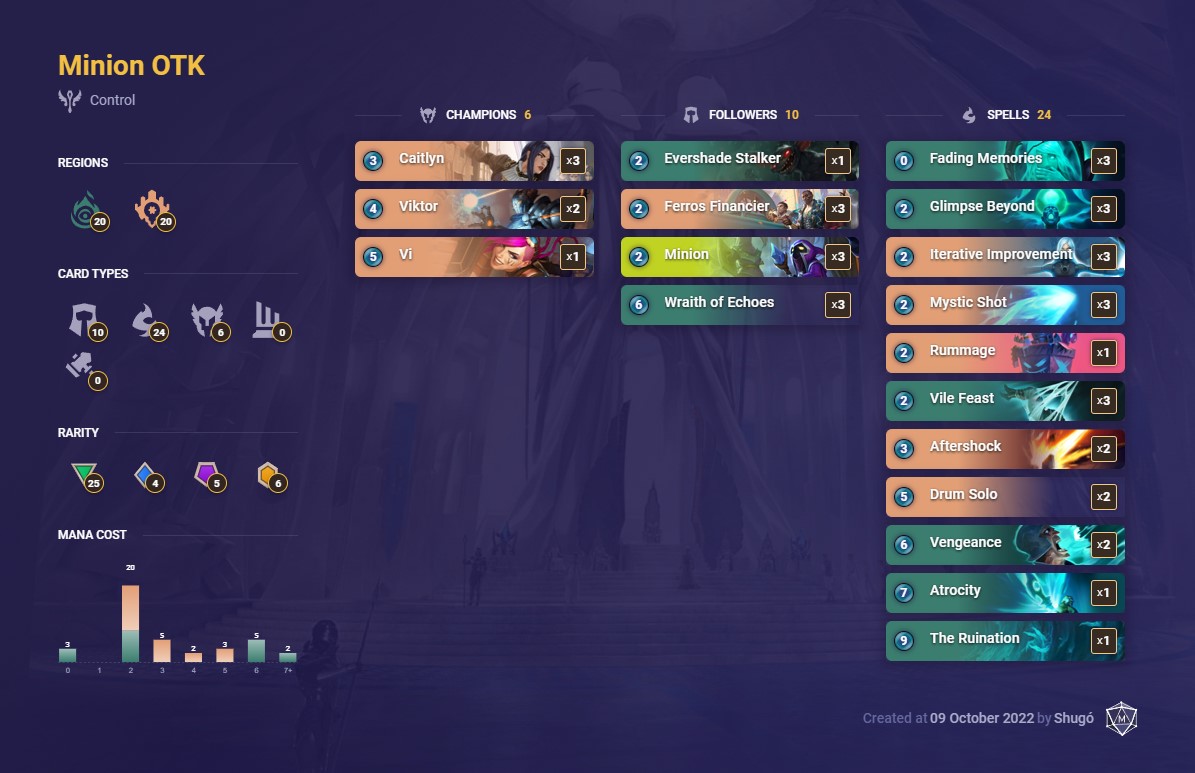 Alas, we finally have Minion OTK!

Utilize copy spells like Fading Memories and Iterative Improvement to create multiple Minions to flood the board. Then once Wraith of Echoes is online, our Minions will continue to grow bigger and bigger until the opponent’s inevitable DOOM! 😀

At least, that’s the hope haha. Regardless, this deck looks like a blast to play! It’s definitely on my list of early patch experiments! 🙂

Where do we draw the line between what we think we want for ourselves, versus what we actually want?