If you’re new to Legends of Runeterra and joining due to the hype around Cosmic Creation, welcome!

In this article, Swim and Kuvira will be recommending three solid budget decks you can use to climb in the Cosmic Creation set. They can be used to climb to high ranks and even to Masters.

All three decks include zero champions (that aren’t already free from the starter decks) and only 3 copies of an epic card. Every other card is either common or rare.

To find more decks, head to our Deck Library where you can search by budget decks, community-created decks, and even decks made by top players and streamers. 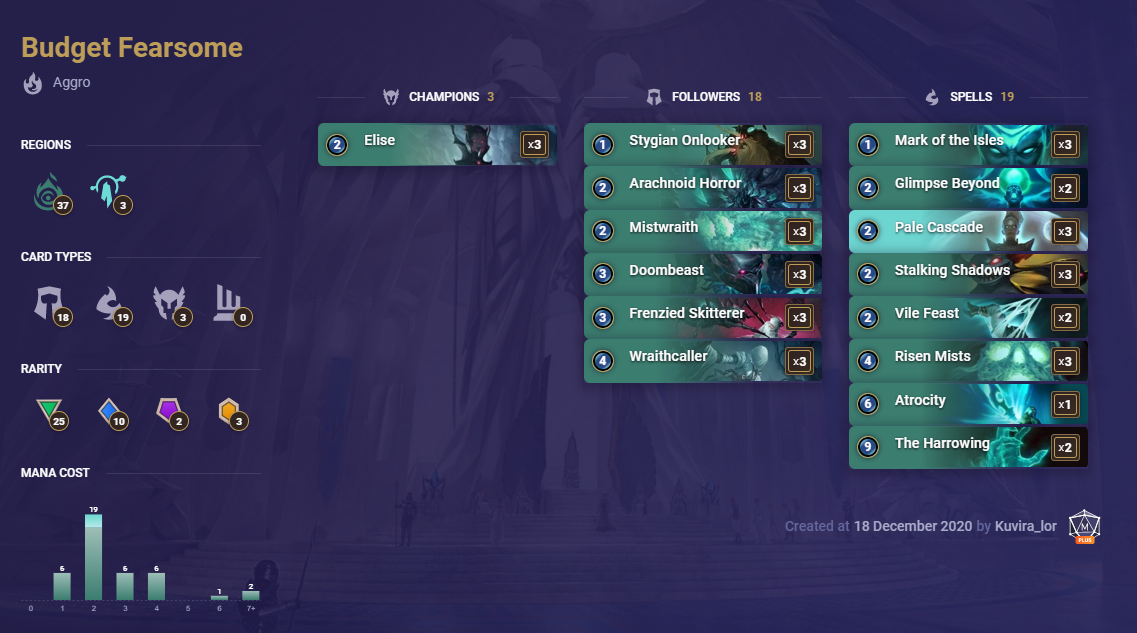 This deck was a tier 1 aggro deck before the new set came out and still is one of the best decks to use for climbing. It’s a very popular deck that was used by many top ladder players and players in the Seasonal Tournament.

It’s an aggro/combo deck that is based around Fearsome units with cards like Elise and Frenzied Skitterer to push damage in one or two deadly attack turns.

Summoning multiple Mistwraiths with Wraith Caller and Mist’s Call is how you deal the most amount of damage early.

Don’t be afraid to let your units die, The Harrowing will summon the strongest Fearsome units and finish the game. Sometimes letting your Frenzied Skitter is a great strategy if you’re planning to use The Harrowing the turn after.

Mark of the Isles will allow you to push damage face by protecting an attacking unit from fast speed damage spells.

Pale Cascade serves the same purpose but also allows you to draw a card and cycle your deck. Don’t be afraid to use both to trade units if they help them achieve their win condition.

Glimpse Beyond and Stalking Shadows will allow you to draw a bunch of cards and basically never run out of value.

Stalking Shadows can get you 2 copies of Frenzied Skitterer that will allow you to remove a 3 attack unit from blocking your Fearsome cards or copies of Doombeast for over the top damage.

Atrocity is also a way to close out games if they tap under answers like Deny or Flash Freeze.

The mulligan for this deck is pretty straightforward: never keep spells except for Risen Mists and keep all units except Doombeast. Never keep two copies of Elise. 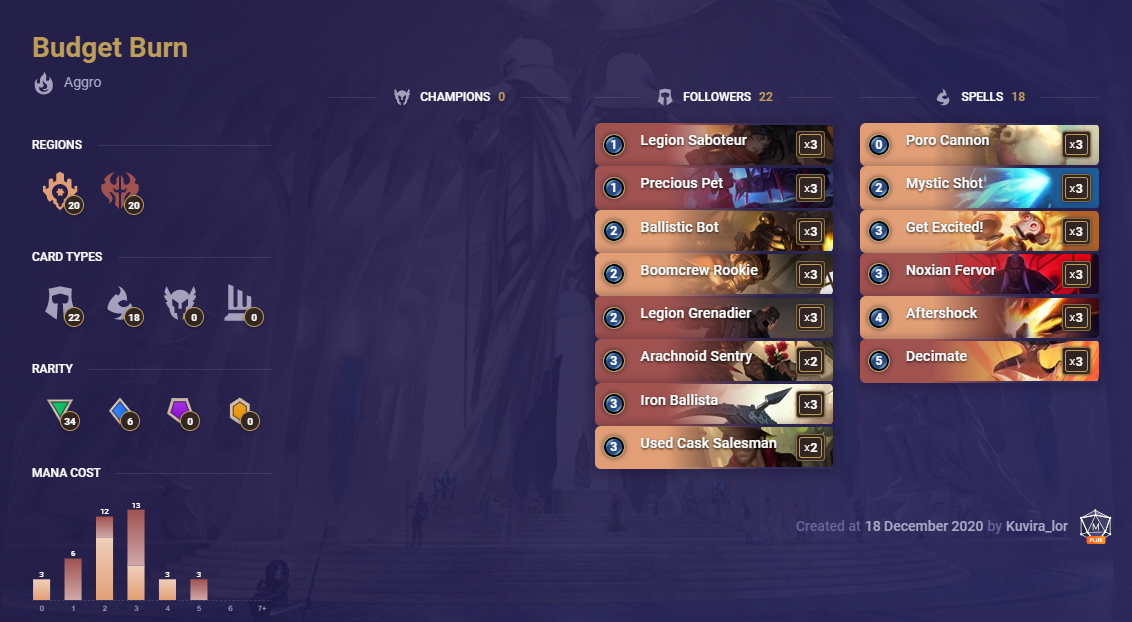 This is another classic aggro deck burn deck that wastier 0 after the Bilgewater expansion. This version isn’t running champions and is running two new cards from the Cosmic Creation Targon Set: Ballistic Bot and Aftershock.

This deck’s win condition is very straightforward, you play early units like Legion Saboteur, Precious Pet, Boomcrew Rookie, Legion Grenadier, and Iron Balista to deal as much damage as possible early game until you finish the game by using your over the top burn spells like Aftershock, Decimate, Get Excited!, Mystic Shot and Noxian Fervor.

Ballistic Bot will allow you to use Ignition and deal 1 damage face every turn without needing to attack. It will also allow you to pass priority back to your opponent to play reactively around what they play.

Arachnoid Sentry is a great defensive tool that will allow you to deny your opponent’s whole attack, which will buy you a turn to draw more burn spells.

You can also use Sentry offensively by stunning one of your opponent’s units and going for a wide board attack.

Used Cask Salesman’s purpose is very similar to Arachnoid Sentry. You’ll be able to play it on defense and block 3 attacks with the Casks while also dealing 2 Damage to your opponent’s Nexus.

Use Poro Cannon to discard an Ignition or even Precious Pet to summon the Daring Poros for some elusive damage.

For the spells, keep only Poro Cannon if you have Ballistic Bot in hand. 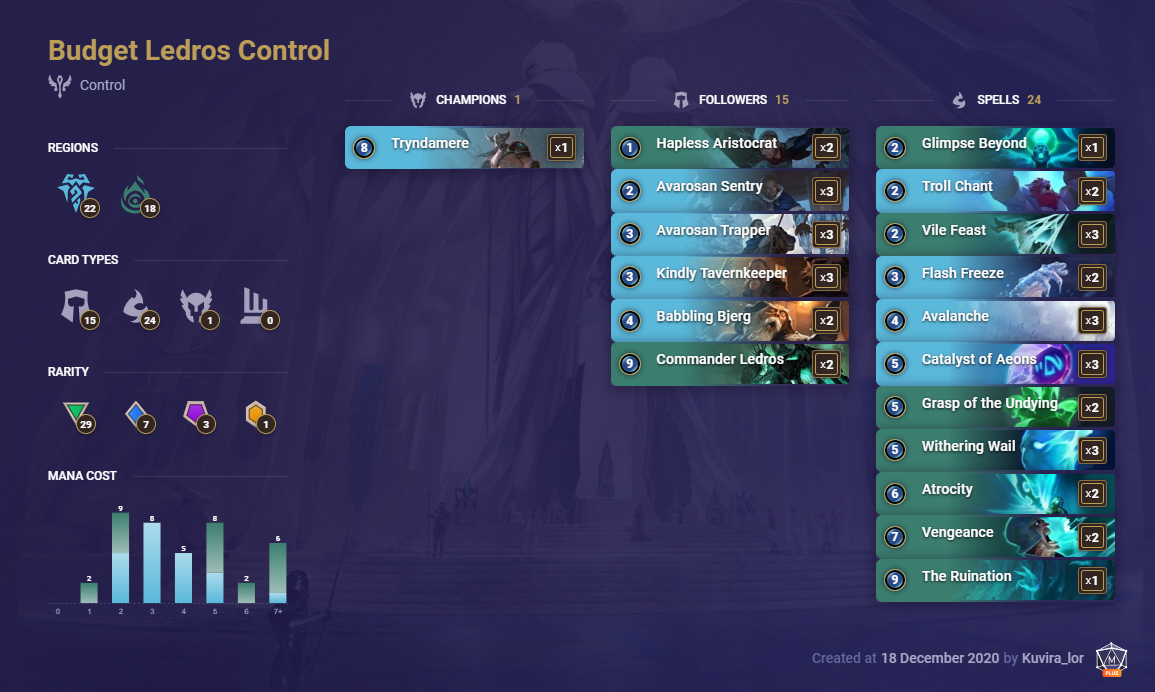 This is a classic control deck using one of the best combinations of regions for control decks, Frejlord and Shadow Isles.

It’s only running Tryndamere as a one-of since that’s available in the starter decks and the only epic cards are Commander Ledros and The Ruination.

This deck’s main win condition is playing Commander Ledros or Tryndamere and using Atrocity when they’re tapped out of mana for an answer like Deny or Flash Freeze.

Versus aggro decks, it’s surviving their aggression and stabilizing with units like Avarosan Trapper and Kindly Tavernkeeper.

Babbling Bjerg will allow you to draw Commander Ledros or Tryndamere and Glimpse Beyond will help you cycle your deck to draw the Atrocity to finish the game.

Use Grasp of the Undying, Withering Wail, Vile Feast, and Avalanche early to deal with the opponent’s board. Vengeance and The Ruination are the removal spells that will allow you to remove bigger threats that you can’t kill with your other spells.

For your mulligan, against aggro, keep Hapless aristocrat, Avarosan Trapper, Avarosan Sentry, Kindly Tavernkeeper, Avalanche, and Vile Feast. You can keep Grasp of the Undying and Withering Wail if you don’t have any of the above vs aggro decks.

Against midrange decks, keep Avarosan Trapper, Avorsan Sentry, Babbling Bjerg, Catalyst of Aeons and/or Troll Chant if you have units in hand.

Thanks for reading! To find more decks, head to our Deck Library where you can filter by budget decks, community-created decks, and even decks made by top players and streamers.