Our Thoughts on Soraka’s Reveal Package (Call of the Mountain)

After many hints, both in card arts and new healing cards being released, Soraka has finally be unveiled as one of the new Targon champions for CoTM’s phase 2.

Here are the new cards that were part of Soraka’s reveal package:

In this article, our Glimpse Beyond experts, Precipic and Rattlingbones, give their analysis for each card.

For more impressions, check out Swim’s podcast video below with Precipic and NicMakesPlays! 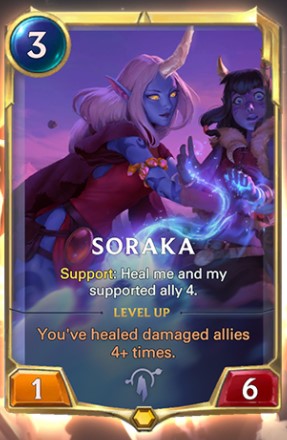 This card is very, very powerful. The clear nut draws for this card are turn 2 Boxtapus, turn 3 Soraka heals your Boxtapus to full, and get a free kill off. However, the fact that this card levels while it’s in your deck gives it value beyond that.

Once she’s leveled Soraka is a card drawing machine drawing you an extra card every single turn in her deck. Beyond that, her stat line makes her basically impossible to kill in combat, and the fact that she heals herself to full makes her a really strong blocker too. 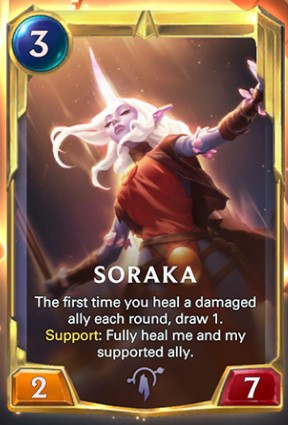 There are a ton of shells that Soraka works well in. She’s great with Regen cards like Trundle because she will just draw you a bunch of cards off of those.

She’s really good with the Bilgewater self-damage cards and Tahm Kench, and she’s really great with most Challengers. Soraka is one of the best midrange tools in the game now because she is a powerful tool vs controlling decks, aggressive decks, and other midrange decks giving those decks the flexibility they need to be the best decks out there. 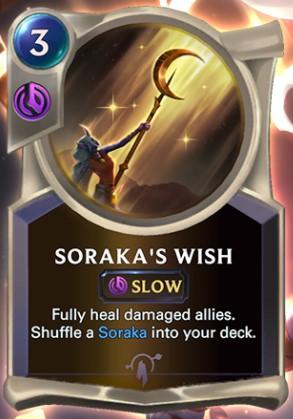 Soraka’s Wish card is one of the worst cards out there. It is comparable to Maokai’s Champion spell Sap Magic, however, it is Slow and it doesn’t even Toss you. 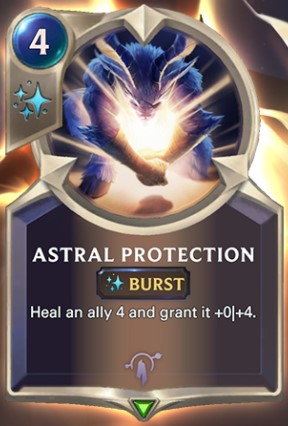 Healing an ally 4 and granting +0|+4 is an interesting concept. In order to evaluate this card, we can look at another 4 mana burst spell card (Fury of the North). Fury of the North was arguably the best card in Runeterra last season. The biggest reasons for this were due to flexibility:

When looking at Astral Protection, what are we really getting?

So we lose a bit of flexibility here BUT the keyword “Grant” is what takes this card a little over the top. Cards like Fiora, Radiant Guardian, and/or Dragons with lots of beef become really hard to hit over. Imagine having a Radiant Guardian that just can’t be killed for a midrange/aggro deck. Feelsbadman.

This card is good and will definitely see play in midrange decks and/or decks that need specific units/champions to stay on the board for as long as possible. 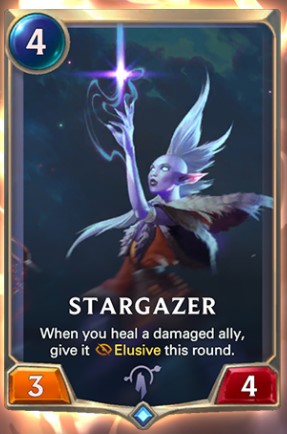 Slightly underwhelming but can do some cool things. Soraka with Vi into a stargazer seems like a viable line to take when deck building. We’ve seen how troublesome VI can get when she’s Elusive (when leveled) dealing 15 dmg in one turn. Keeping in mind that a gem and/or guiding touch in conjunction with Stargazer will make it Elusive.

One thing to make note of though is the fact that you can make more than 1 unit Elusive for the turn. You can see a world where a Citrus Courier and/or Soraka’s wish can heal up multiple units in conjunction with units that are self-damaging (Tarkaz) to create a board of Elusive units and going for the kill.