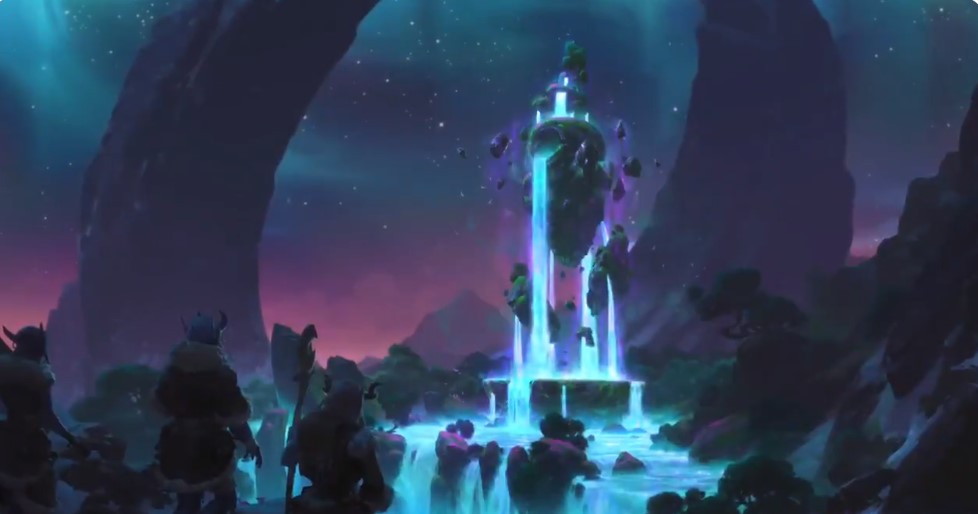 Targon received a TON of new healing options for the 2nd phase of Call of the Mountain so it seems inevitable that Soraka will be revealed very soon.

In this article, our Glimpse Beyond experts, Rattlingbones and Precipic give their first impressions of each card. For more analysis, check out Swim’s video below with his thoughts. Star Spring basically reads, “If you build around this, your allies have +1-2 Health.” This card synergizes well with the recently revealed Bilgewater self-damage cards.

It also works quite well with any sort of Challenger with high Health – cards like Laurent Protege, Boxtapus, Thresh, Tahm Kench, or Screeching Dragon are pretty nice synergy points.

Broadback Protector is kind of an insane synergy with this card since you’ll consistently gain a lot of Health back. And of course, this card is also very likely to work well with Soraka.

The win condition element of this card is pretty unlikely to happen unless you put regen units like Trundle into your deck but those cards have 0 synergies with anything other than the win-con so it seems quite bad to me to do that. This is a nice tool to have access to in the game. If landmarks are good then having a card that is able to both search for them and destroy them is a really nice effect.

It gives your deck some nice consistency while also giving you interaction for an otherwise hard to interact with card type. A 3 mana 3/3 that generates value with Spring Gifts is quite strong for all the reasons stated below about Spring Gifts. It is very likely to see play in any deck that wants access to self-healing effects.

This card is also really nice in a Starlit Seer deck because it gives you both a spell for Starlit Seer and heals the massive unit you get off Starlit Seer to full.

I can also see this in a P&Z deck with Vi that uses it to heal Vi back up when that’s good or for Rummage when you need discard fodder. Fully healing an ally is a really cool concept in Runeterra. There have been many instances where Fiora and/or Lee-Sin all-ins fell through because they didn’t have that 1 extra Health.

It’s why cards like Guiding Touch were SO good. Granted, Guiding Touch is just on another level (being a Burst spell and also drawing a card), but that shouldn’t take away from the fact that you can FULLY heal an ally unit for 1 mana.

The key synergies I see with this card are: