Jordan “WhatAmI” Abronson here with your forecast for today and it’s looking to be a dark and storm one.

Possible even a dark-in stormy one if you catch my drift.

Terrible puns aside we’ve got some pretty cool spoilers including a completely new card type and champion for you today. 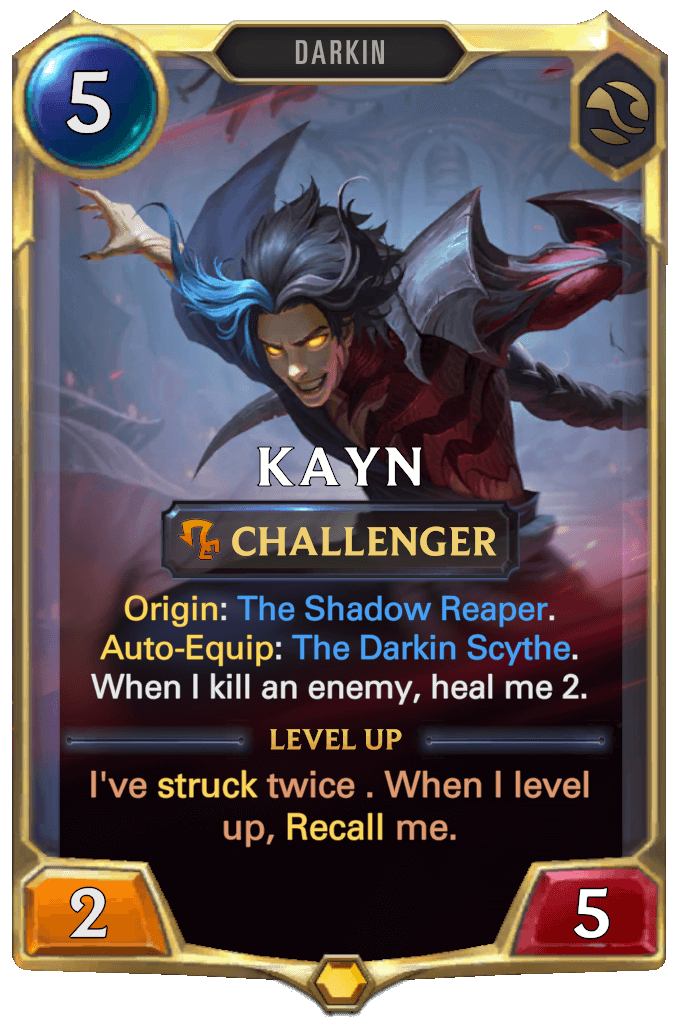 Well, that is quite a bit to break down and we’re really only about a third of the way through this champion. First of all let’s look at what Kayn does all on his own. He is effectively swinging on turn five as a 3/5 challenger that heals himself two if he wins his combat. 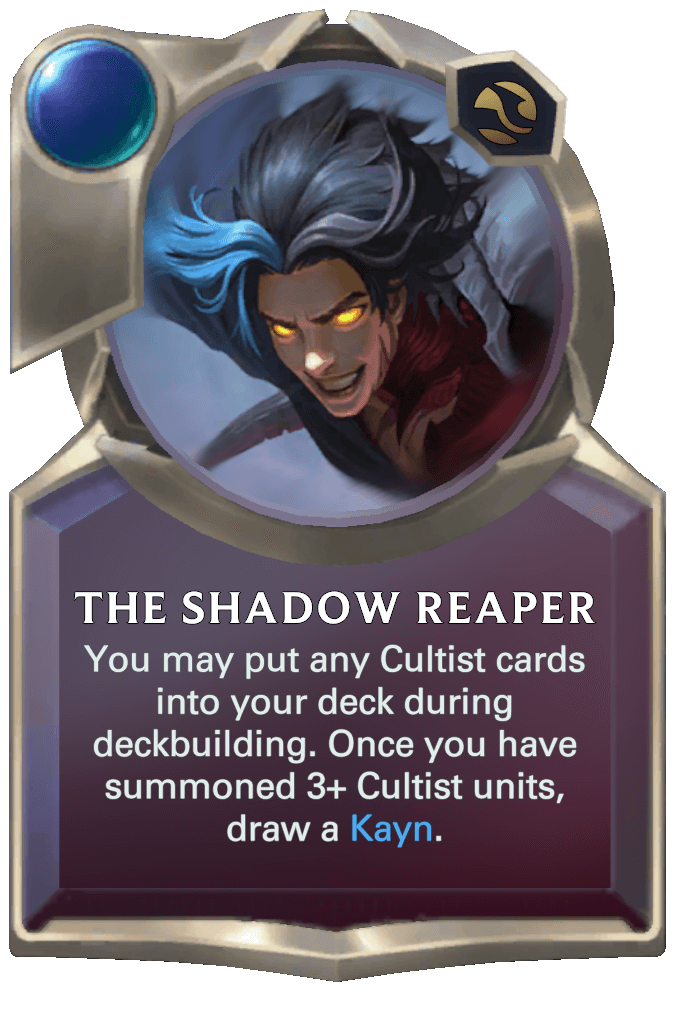 That’s not exactly *bad*, but Thresh kind of already does that better and doesn’t see massive play. However, there are two important things here that may catapult Kayn into power. 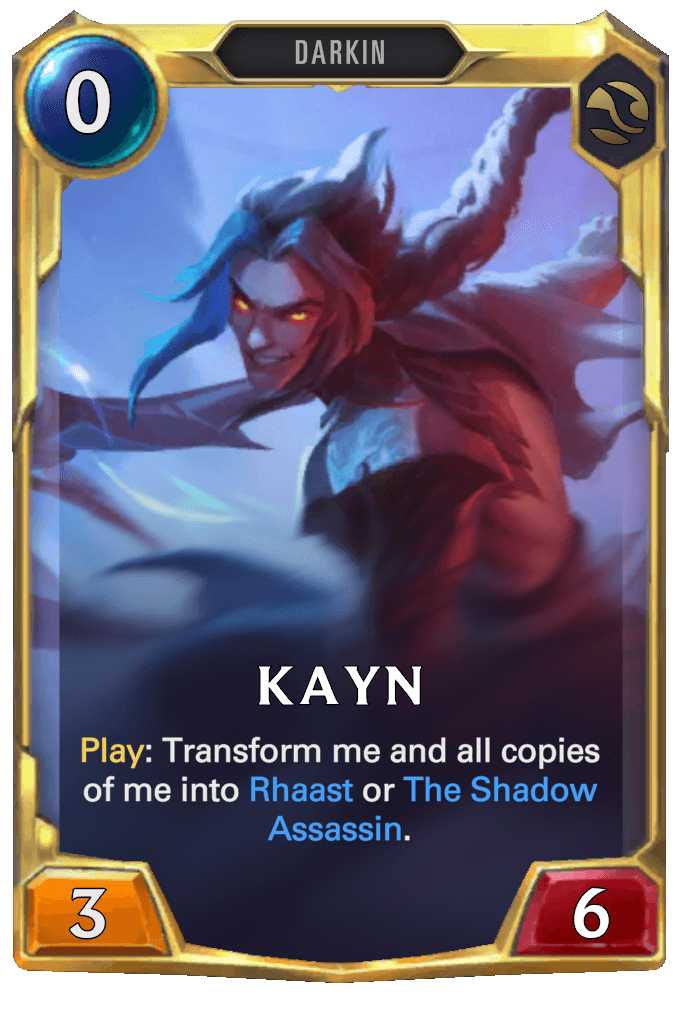 First, if you’ve built your deck around him, he draws himself. That’s huge, not only is it card advantage, it’s a literally unheard-of amount of consistency. Your champion will simply be in your hand almost every game without fail. That’s pretty nuts right there. 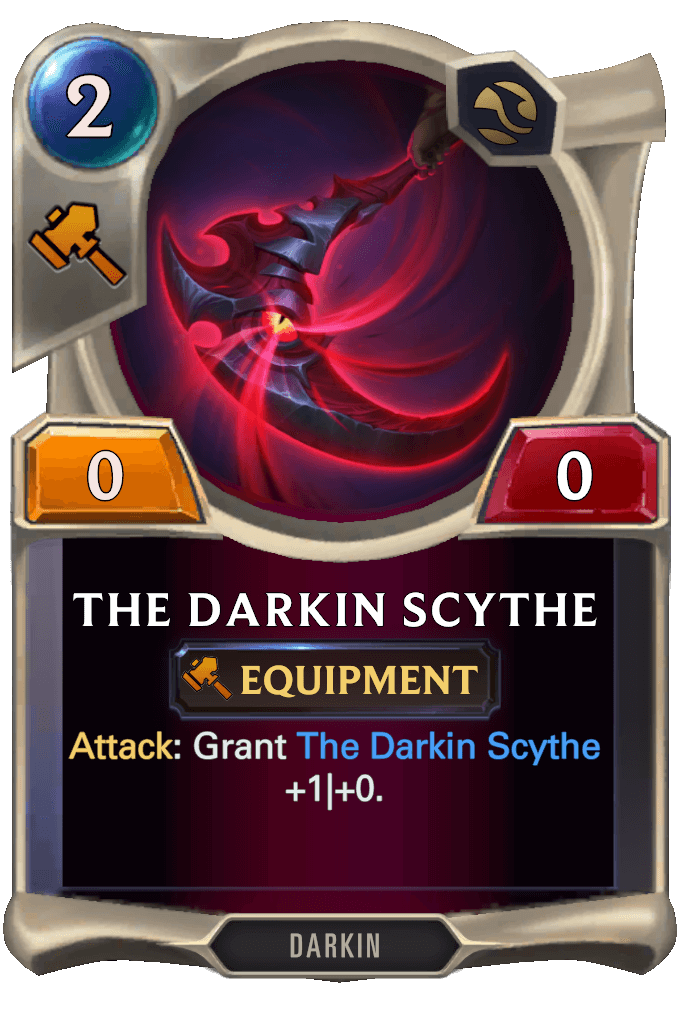 Second, his attack buffs not himself, but his Scythe. That means that even if you do kill this powerful free unit that drew itself before it leveled, there is still an ever-growing threat to slap on to a random Elusive or Overwhelm unit to push lethal damage. That’s a pretty insane package at level one, let’s check level two. 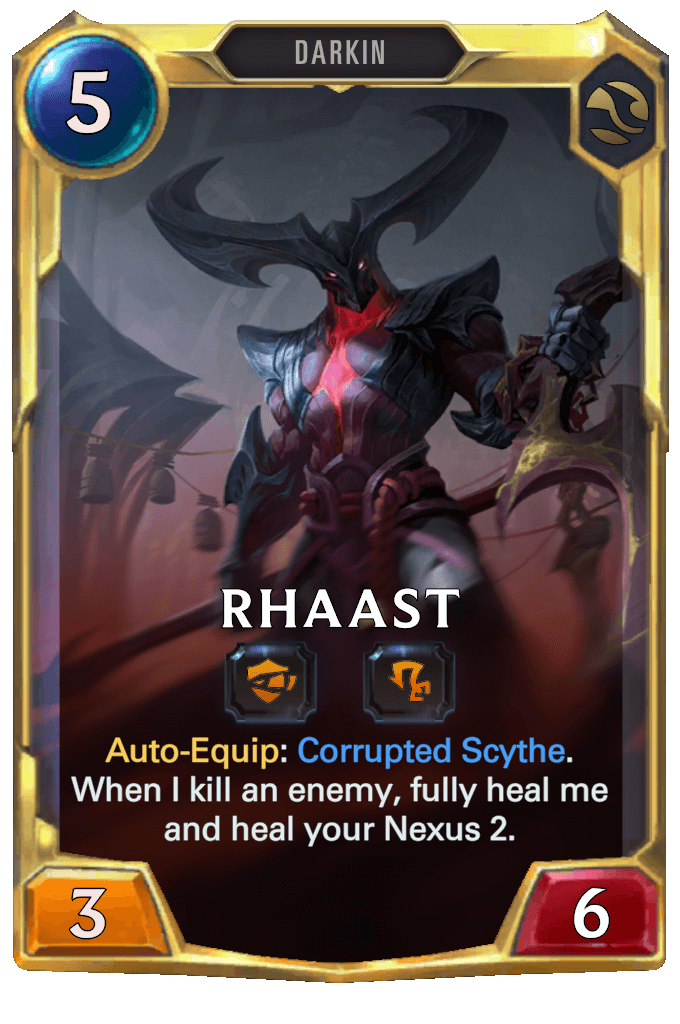 Did somebody order a completely un-raceable threat? One that double as removal, board control, and grows at an unreal rate over time, passing on that growth if you ever do manage to kill it?

Ok, but enough about Kai’Sa, let’s talk about Rhaast.

This bad boy is looking to put in some serious damage, and will be able to pick his fights every time. 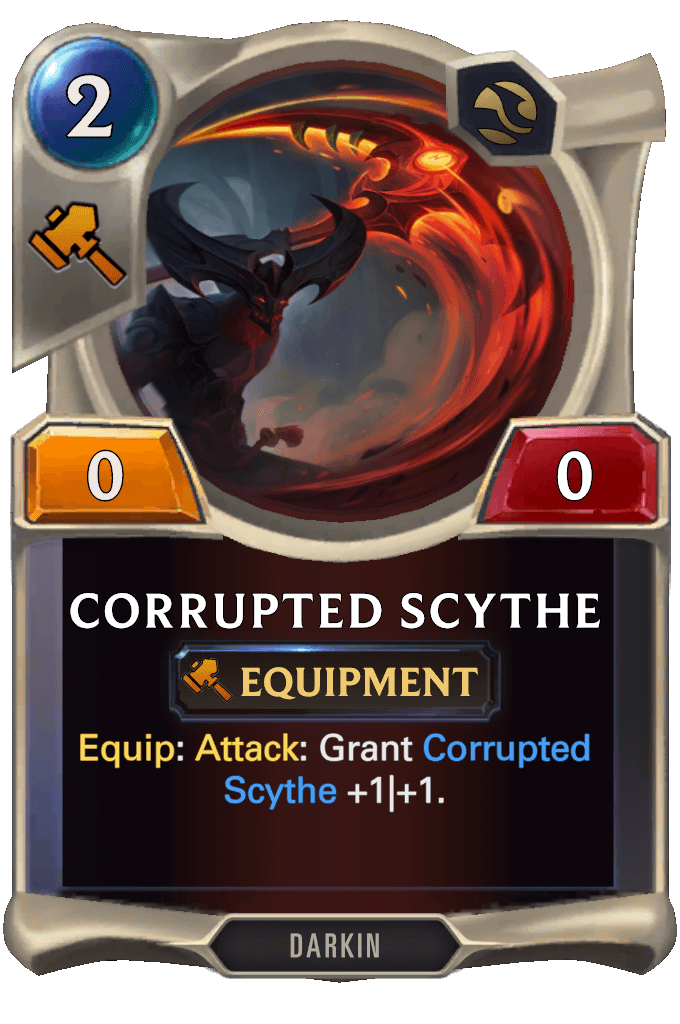 He is a powerful force unto himself, let alone if you start giving him any additional help. The idea of combining Rhaast with Rally effects has got me quaking in my poor control player boots. 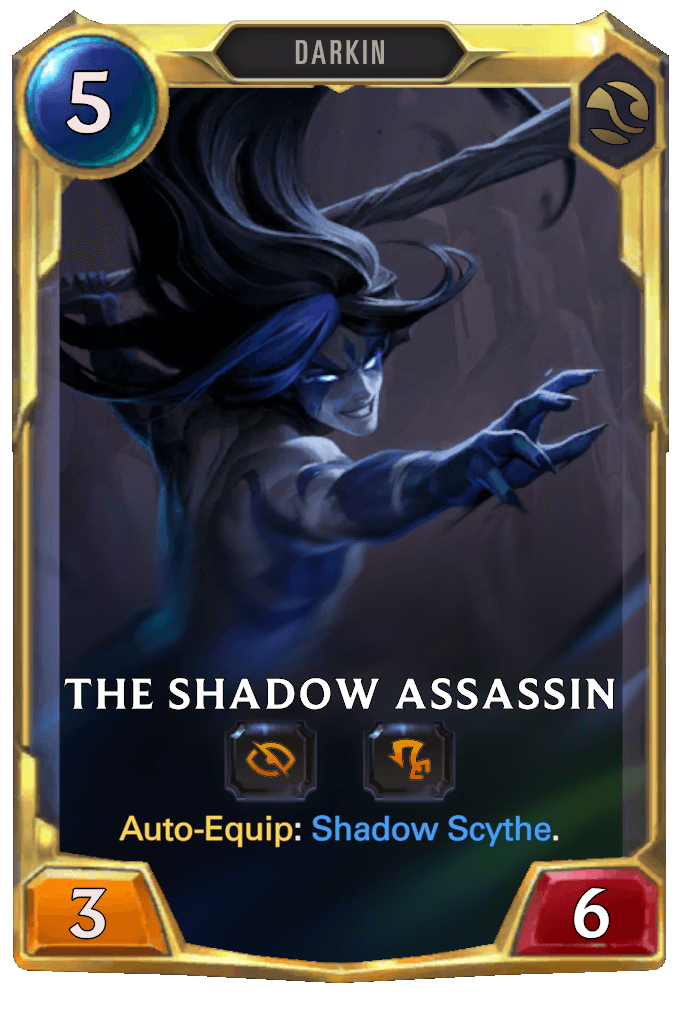 This version of our boy can still challenge if you really need him too, but he’d much rather just off your opponent for you. Attacking the first time for an elusive five and scaling up after that unless he is answered and quickly your opponent is not going to be alive very long. 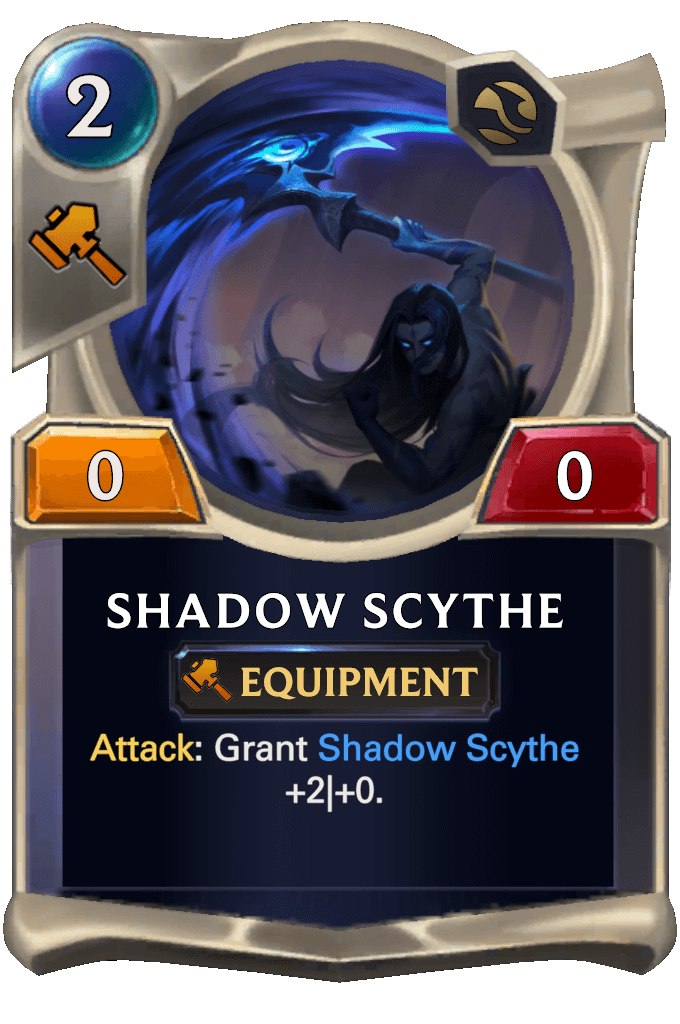 Given the ridiculous might and board control powers that Rhaast represents I suspect this will be the lesser-chosen leveled up version of this champion. However, that said, Elusive is a crazy strong keyword.

The fact that it is there as an option is a huge buff to an already ridiculously powerful package. And one that, may I mention one more time, draws *itself.

I think the odds that there is a tier one Kayn deck somewhere are incredibly high and I’m looking forward to working on one. 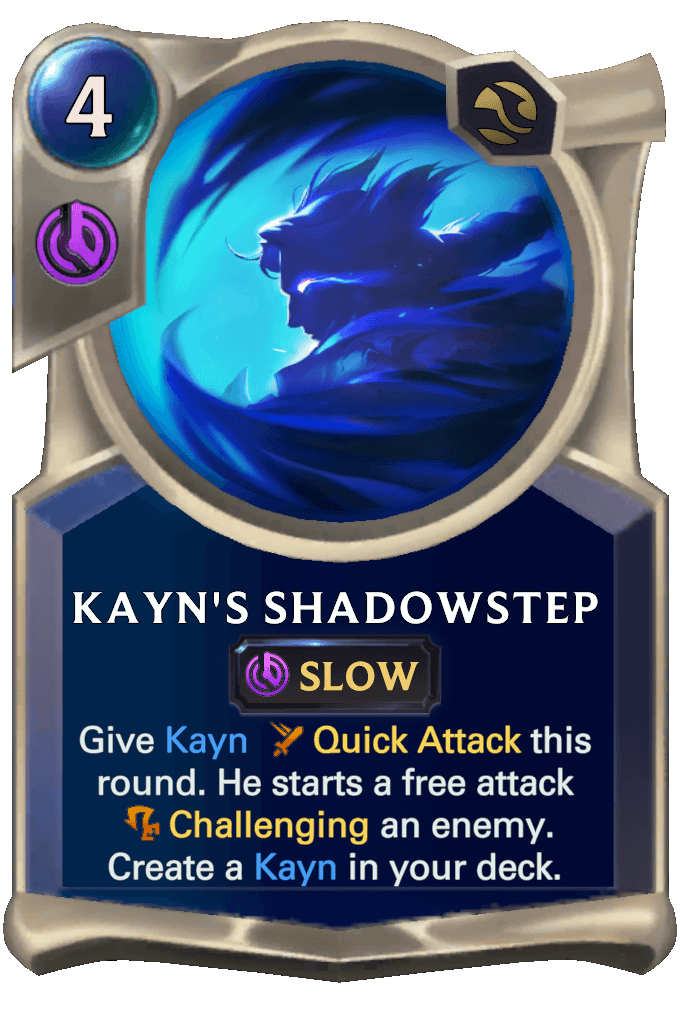 This spell is crazy powerful because, absent removal, it will allow you to level your Kayn up the turn he comes into play. He will kill two of your opponent’s threats and be on his way to winning the game all on his own.

Above even that though, this will exist as a spell much more often than any champion spells before it. The reason for this is if you are playing three Kayn’s in your deck then there are reasonable odds you already have one before his origin procs and dumps your second copy into your hand.

For folks out there not used to seeing champ spells on a regular basis or having to play around them by default, be warned this one will be different. It is often quite a reasonable assumption that your opponent will have access to this powerful tool. Play accordingly. 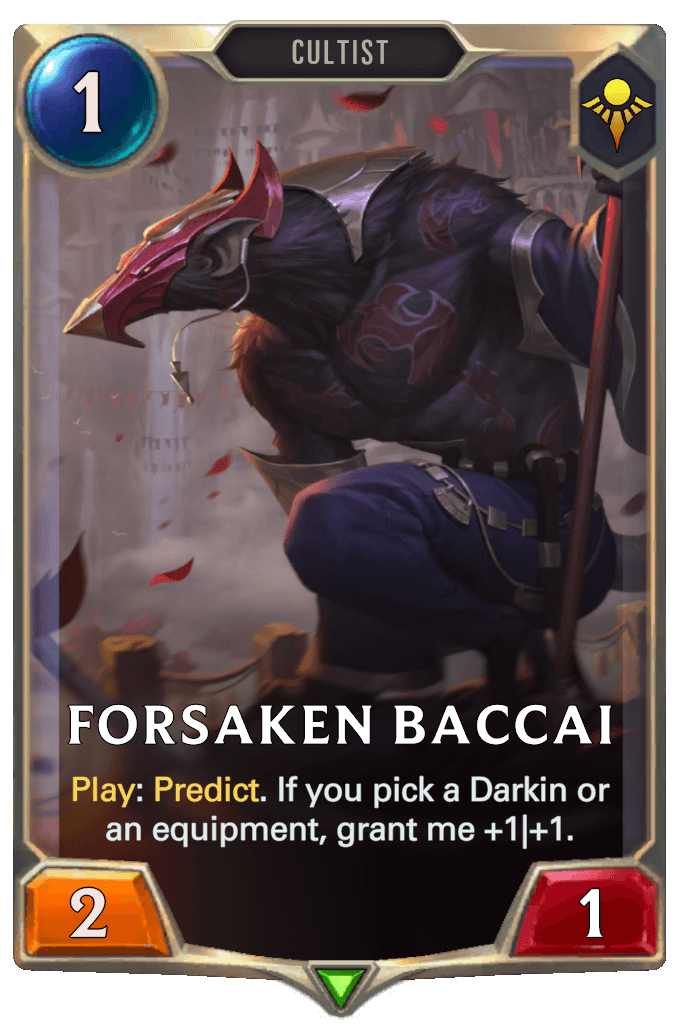 Ok, maybe I am a sucker for one mana value cards but I honestly think if the text here had stopped at predict this card would have been quite powerful.

A one mana solid unit that trades, provides pressure, and sets up your next draws? Sign me up right away.

But beyond that, it can be a 3/2 on turn one if you hit things that you may well want to be playing in your deck and have lots of anyway. Holy cow. There is a new contestant in the best one drop follower printed category. Treasure Seeker has competition from this little cultist. 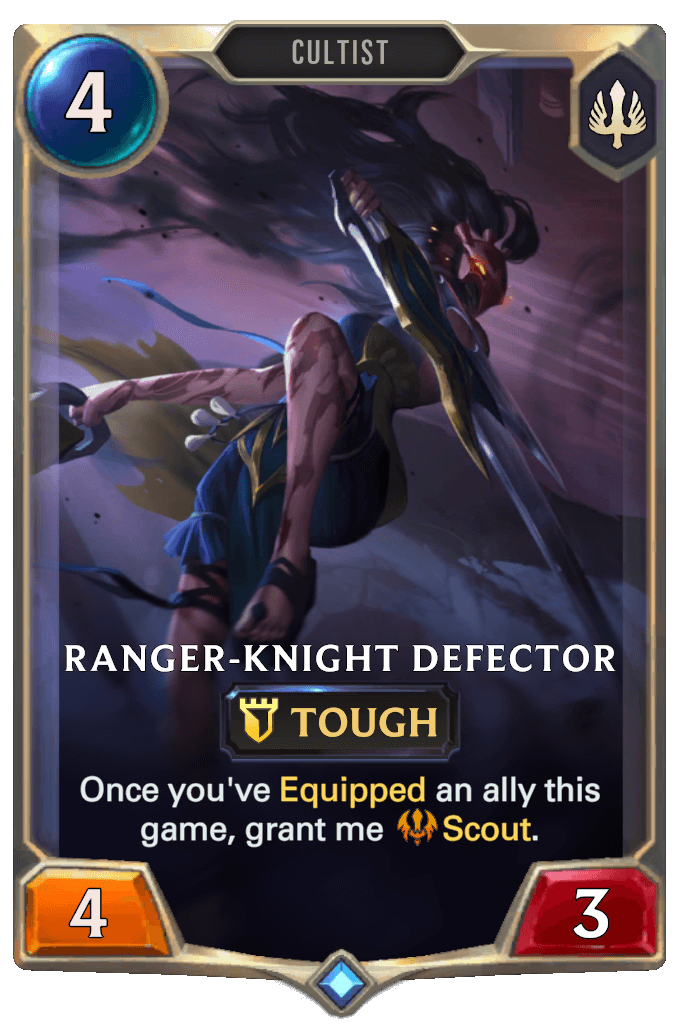 This one I am touch more lukewarm on, but perhaps I am underestimating the power of the scout keyword here. Four mana 4/4’s have never been all that impressive unless they have something else to back it up. And while tough is definitely something it’s not huge.

That said if you can consistently have this scout attacking on turn four, then it will be a monster. Against anyone who doesn’t have something that can trade into it the pressure this cultist will put on will be unbelievable.

We’ll have to see what the equipment package looks like to fully evaluate all of these. But keep a close watch on the cultists both in and out of Kayn centric decks as the rest of spoiler season unveils itself. 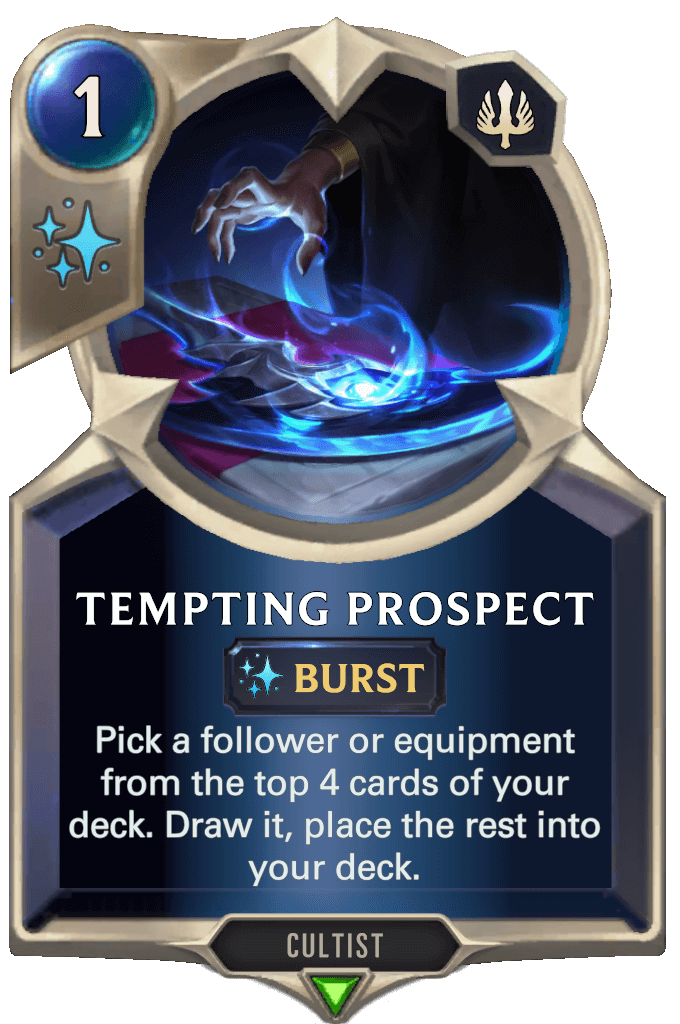 Well just in case the Kayn archetype didn’t already have enough consistency this little gem is here to help out. You’ll basically never miss with this so it’s a filtered draw one for only one mana.
The questions that will have to be answered for whether this sees play or not will be twofold.

One: does this archetype actually *need* a consistency boost, or will the slots be more devoted to power. Two: How mana hungry are we.

I would lean towards this not being included as a three of, but likely fine as one or two. Aggressive midrange archetypes tend to want every point of mana they can get their grubby little hands on, so much like Noxian Tellstones before it, however high the power level here, this card may end up lacking for an actual home. 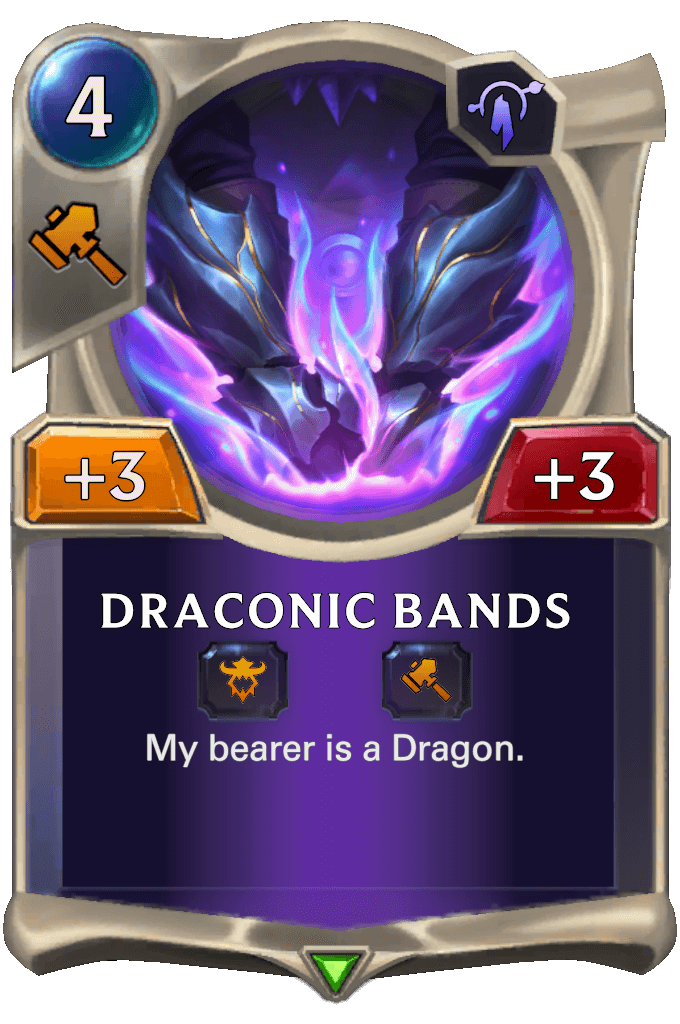 This one falls a little flat for me. Not because it doesn’t do some extremely cool things, but because four mana is an awful lot of investment for a stat boost that is going to fall off as soon as you use it.

Maybe we’ll be able to combo this with things like single combat and other Demacia strikes to multi-proc our equipment fury, but I’m not holding my breath for this one to be impressive.

Even when we’re talking spell mana, this is a dangerously large tempo loss to allow your opponent to go wide around and kill you. Or, you know, just point a vengeance at your equipped unit and laugh at your mana deficit. 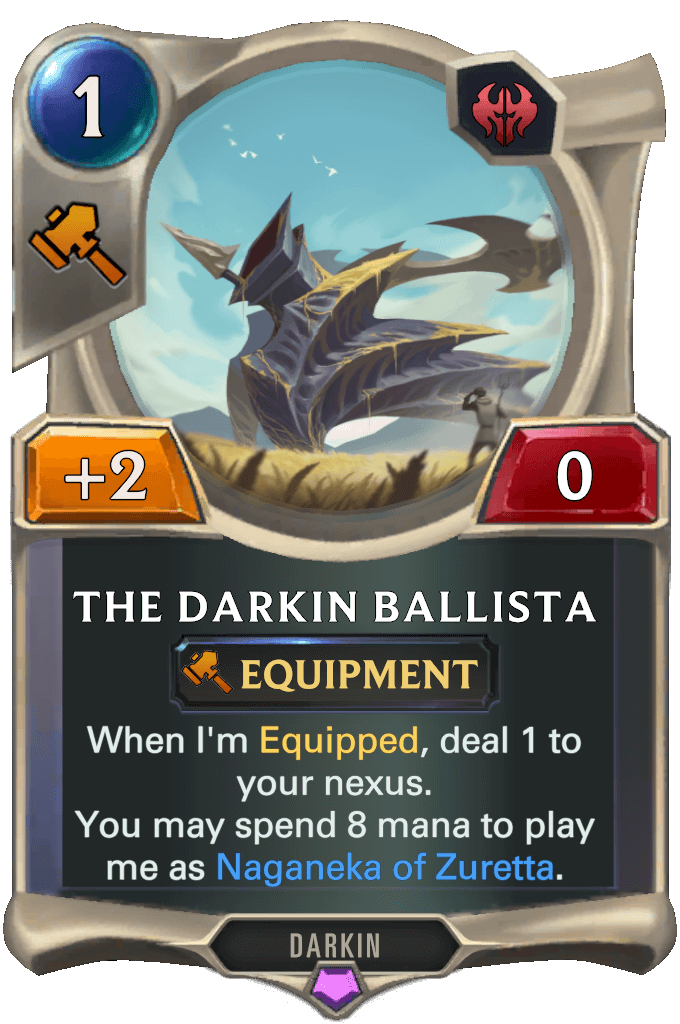 On the other hand, this is the kind of card I love. It’s a solid way to push damage early on, or set up favorable trades for the low cost of a single mana and a health point from your nexus.

Then later in the game when such small boosts aren’t as big a deal and you need to be more protective of whatever health you have remaining, suddenly instead it’s a game ending threat. 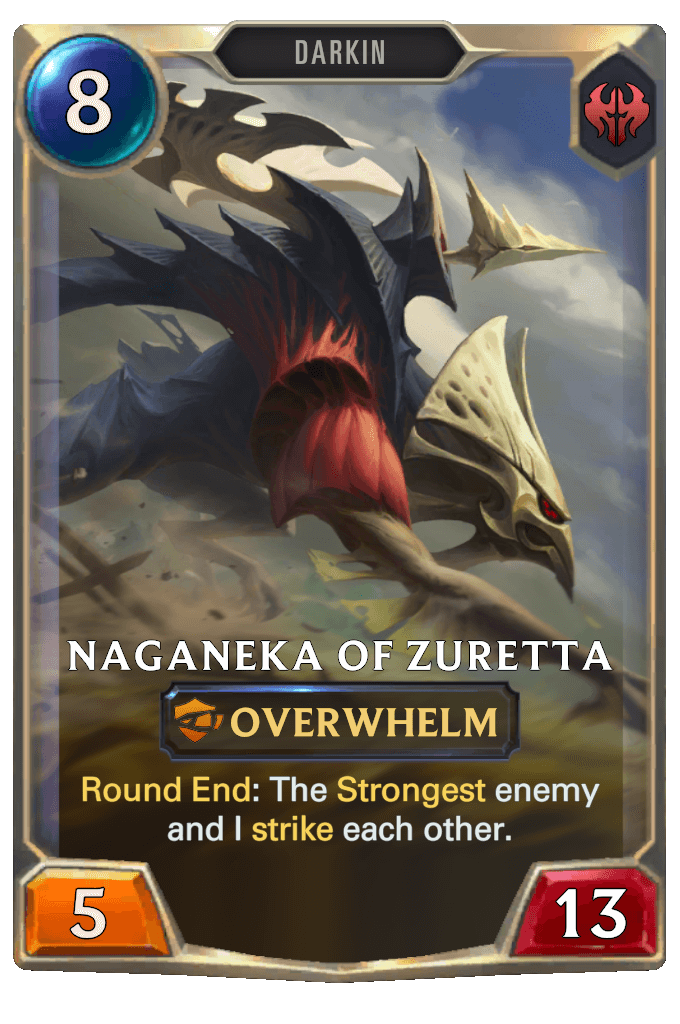 The back end of this reminds me a lot of Leviathen, and the front end seems like a solid tool that will stop it from ever being bricked in hand. This wants to find a home in either an aggro deck, or some kind of Noxus Midrange brew, and when it does, I expect it to be a powerhouse. 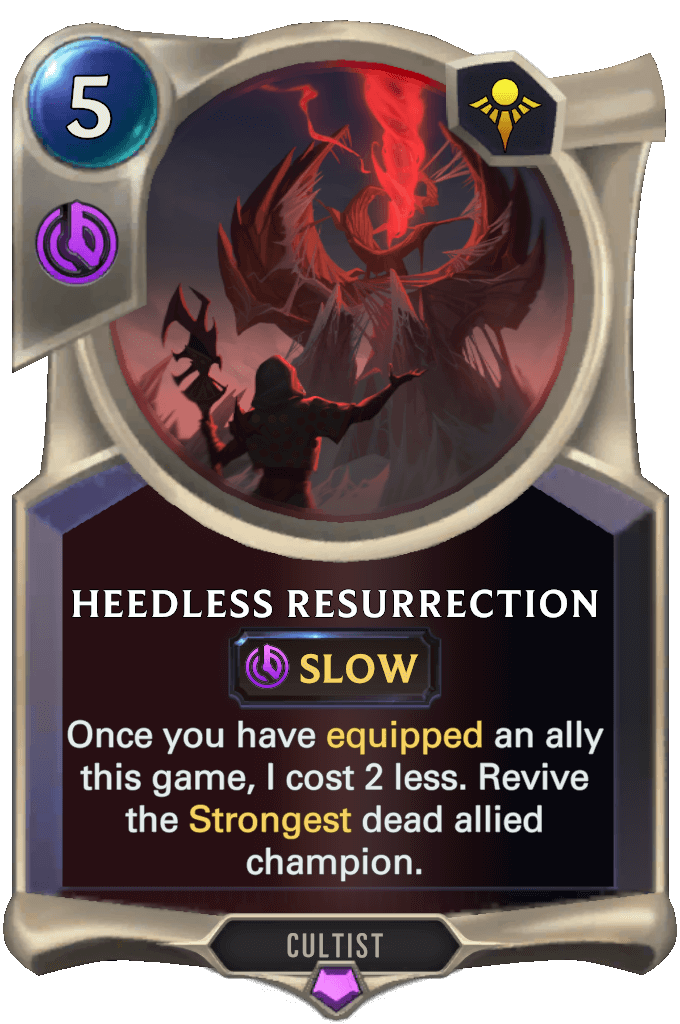 They nerfed hourglass, and then made this. Mists call, but we’ll just decided we want even less meaningful counterplay? I’m scared folks. Honestly frightened of things on this power level that stop interaction with champions from mattering.

I don’t even know what to do with this card. I guess I suppose I will pray to our new Darkin overlords that I am over-reacting and this will turn out to be less broken than it looks.

If I’m right though then I guess the answer will just be to decimate them to death before they get out of control. Because with this unholy tool floating around trying to control your Shuriman opponent’s champions does not appear to be a particularly viable option. 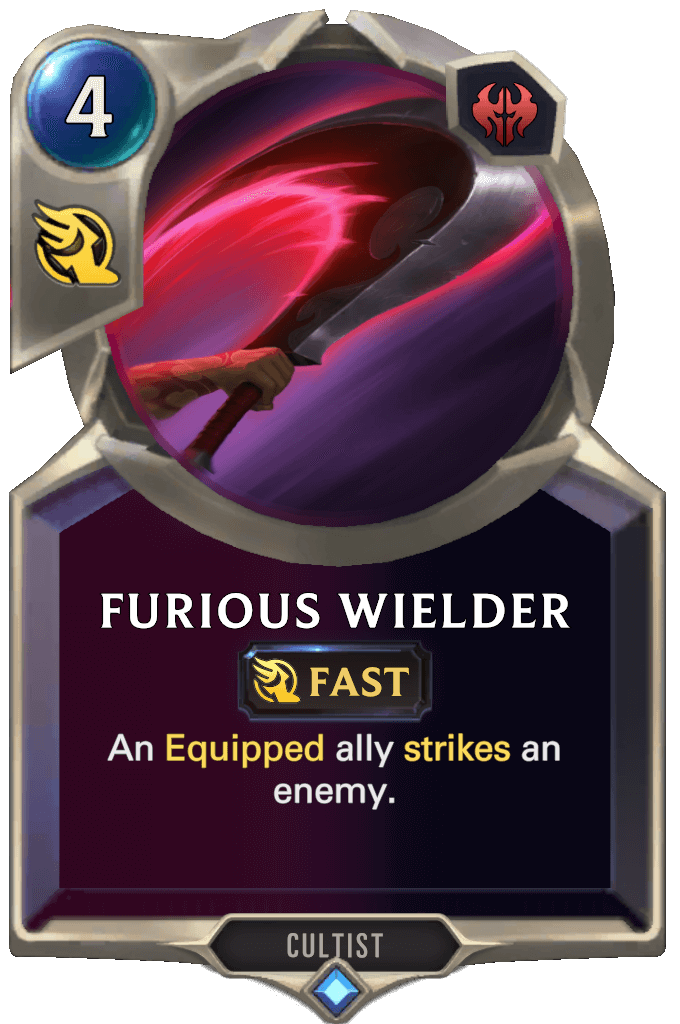 In the right deck this will basically end up looking like a four mana Concerted Strike. This will be an important interaction tool in any deck that likes to have Equipment running around and can consistently get it online.

It’s also worth noting that this is the first cultist spell we have seen. This let’s the archetype at least somewhat avoid the Lurk problem of being too one dimensional. I’ll be very glad to have this alongside Kayn in basically any deck that ends up wanting to play him.