Kicking things off, there’s a brand new Boon being added to the game…and from a competitive standpoint, it’s a spooky one… 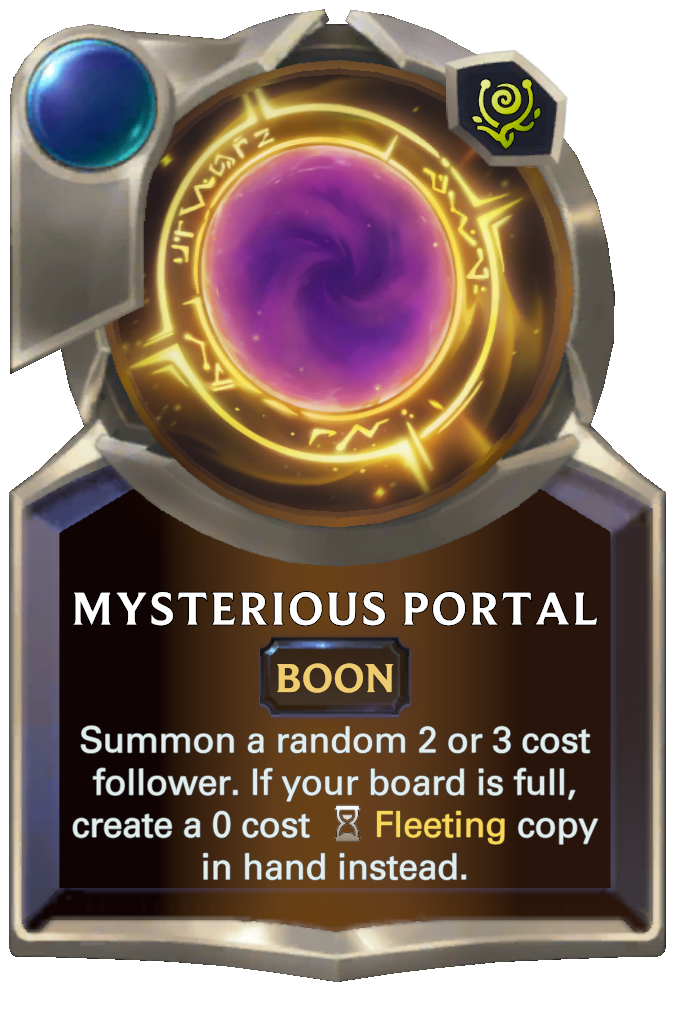 These Mysterious Portals follow Bandle City’s past trend of random 2-3 cost followers, except this time, they’re randomly summoned upon drawing the Boon from your deck! You thought free stats are a problem? How about free units!?

Before we get too carried away, remember that Chimes are powerful because they make units much more threatening and resilient than they normally would be. Mysterious Portals won’t do that. But what they will do is flood the board out of nowhere!

While this does seem like a fun mechanic from a casual standpoint, competitively this scares me. What determines its playability are the cards surrounding the mechanic, so let’s dive in. 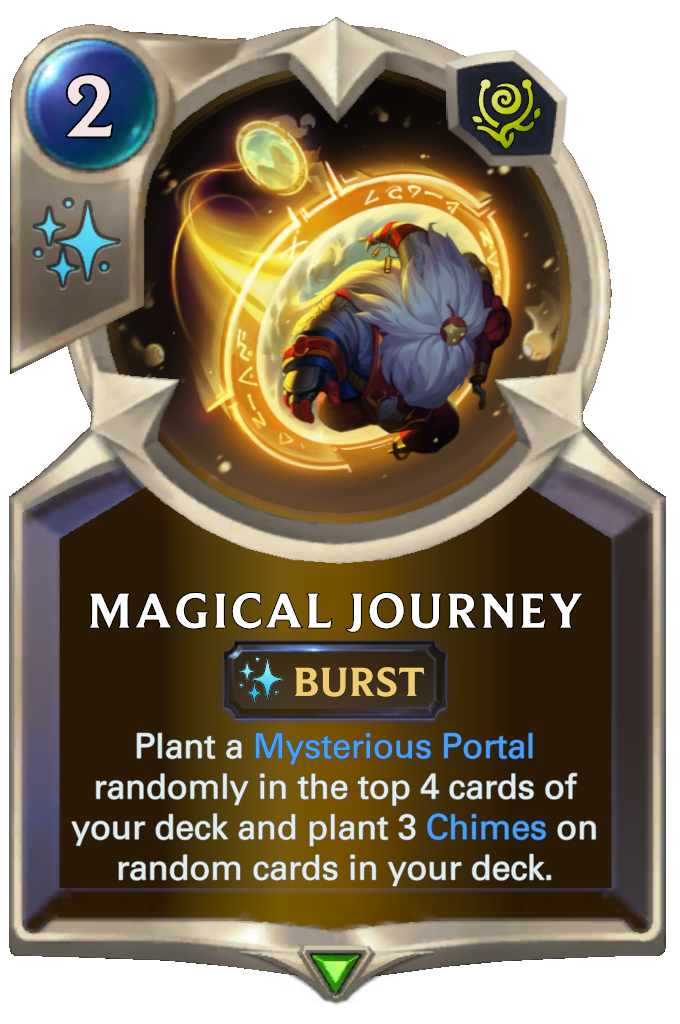 Mysterious Portals are interesting as they function as essentially a delayed unit. Getting a random 2-3 drop for two mana is likely worth the cost most of the time, but not knowing when it will happen is a real downside.

Thankfully we know it’s within the top four cards, but getting the unit on the first draw versus the fourth could be night and day, and that’s not even accounting for the unit itself that’s summoned.

Seeing how the card doesn’t actually do anything the turn it’s played (unless paired with draw effects), I don’t expect it’ll be worth including. The Chimes are an added benefit, but not enough to help justify the card.

At least Bard’s card pool gets a bit bigger. 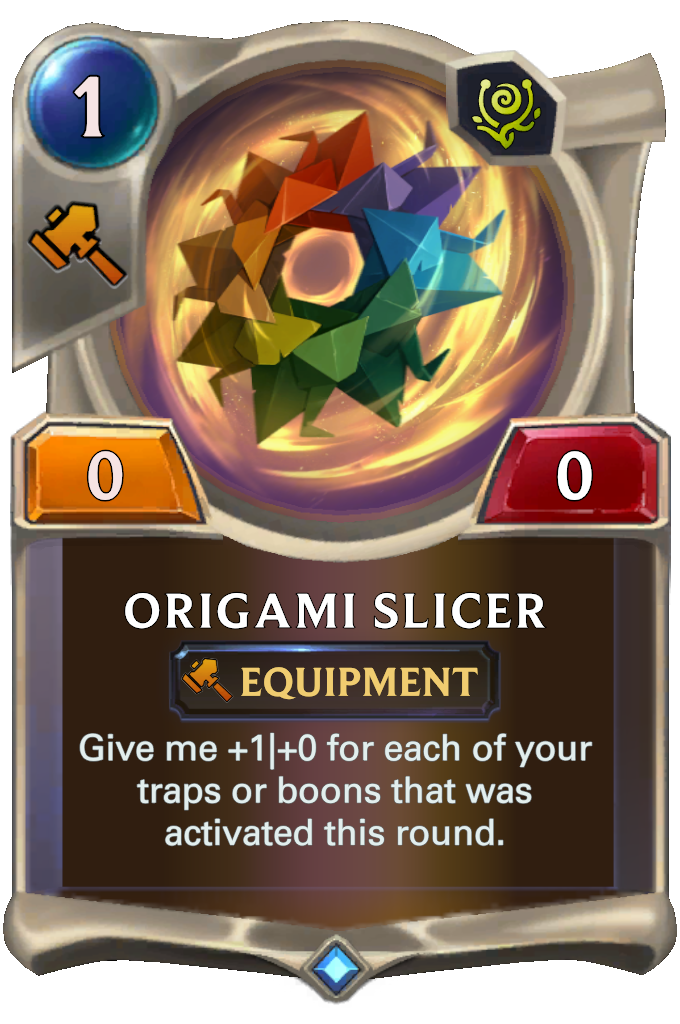 The ceiling of this card is very high for its cost, but I imagine we’ll be left with more feel-bads than feel-goods. Not only are we at the mercy of RNG, but it’ll only sting more when our huge buff happens on the turn we can’t attack.

Sure, there are times where this being buffed defensively could be a good deterrent.. But in general we’ll want to be dealing damage.

This feels too slow and unreliable now that Bard doesn’t start creating Chimes until turn three. Puffcaps seems like the best place in terms of trap quantity, but there aren’t many appropriate targets aside from Teemo, and he’s got a huge target on his back already. 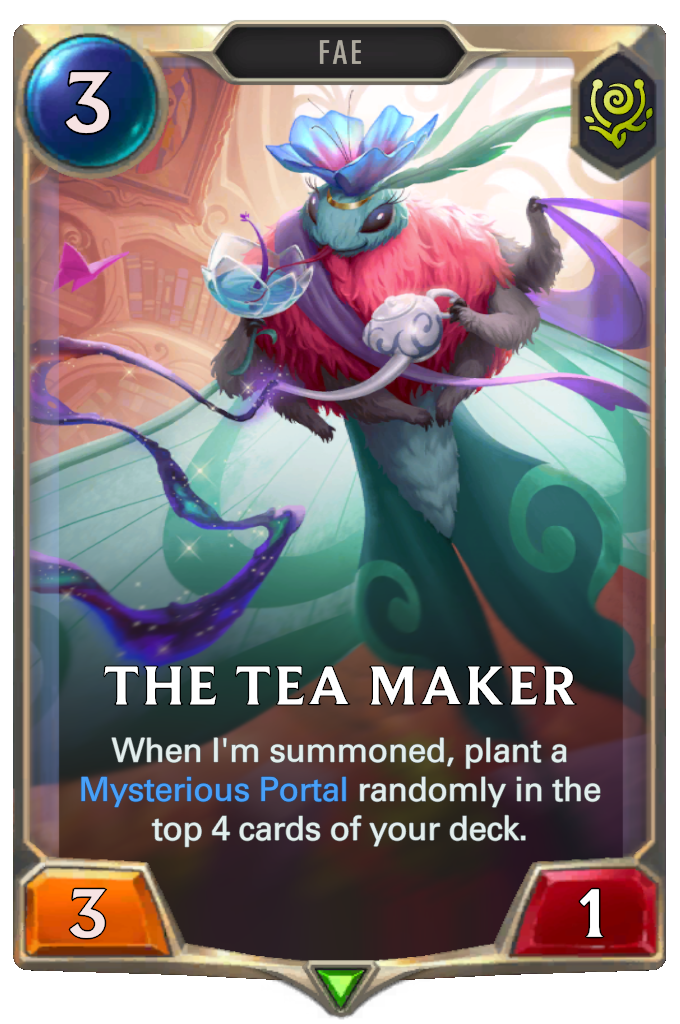 We can treat this as a three mana 3/1 that summons a random 2-3 cost unit a bit later. Stat wise, it’s like a delayed Petty Officer. While a 2-3 cost unit is much better than the average 1-drop, not being able to summon it immediately is a massive drawback. It’ll only feel worse when you get a below average 2-drop in return..

At 3/1 for three, this just isn’t good enough. At best it’s okay and at worst it’s unplayable. However, it’s still a Fae, so be prepared to see it Manifested from time to time. 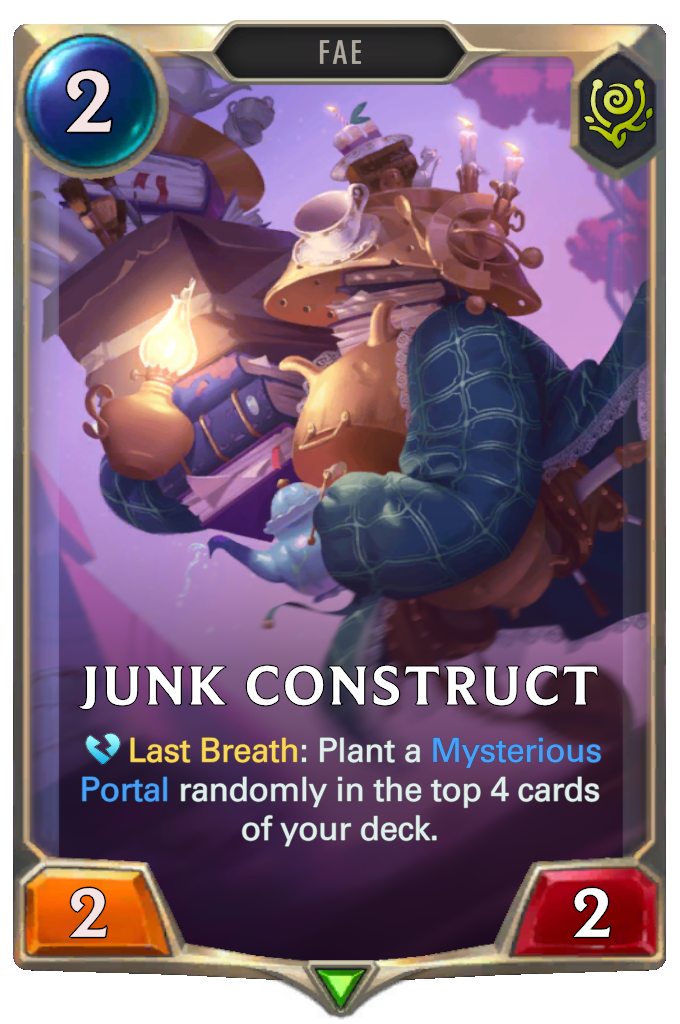 This is where I start to get a bit nervous.. Whenever there’s a new mechanic, we often get a two mana 2/2 with upside, which often leads to a very good card. Junk Construct is that card..

At a baseline, this is a two mana 2/2 with “Last Breath: Summon a random 2-3 drop within a few turns”. EXCUSE ME!? There are no drawbacks here.. This literally replaces itself with another unit, and in many cases it’ll be stronger than it was originally. AT NO COST!

Anyone else remember Piloted Shredder? If you know, you know.

I would not be surprised to see nerfs in the future. The Tea Maker is a joke in comparison. I hope I’m overreacting here, but Junk Construct is a spooky card!

The trajectory of our day is often influenced by its first moments. We hear it all the time. It’s why many advocate for starting the day off on the right foot.

Even something as simple as a cup of coffee can go a long way. Find what comforts you!