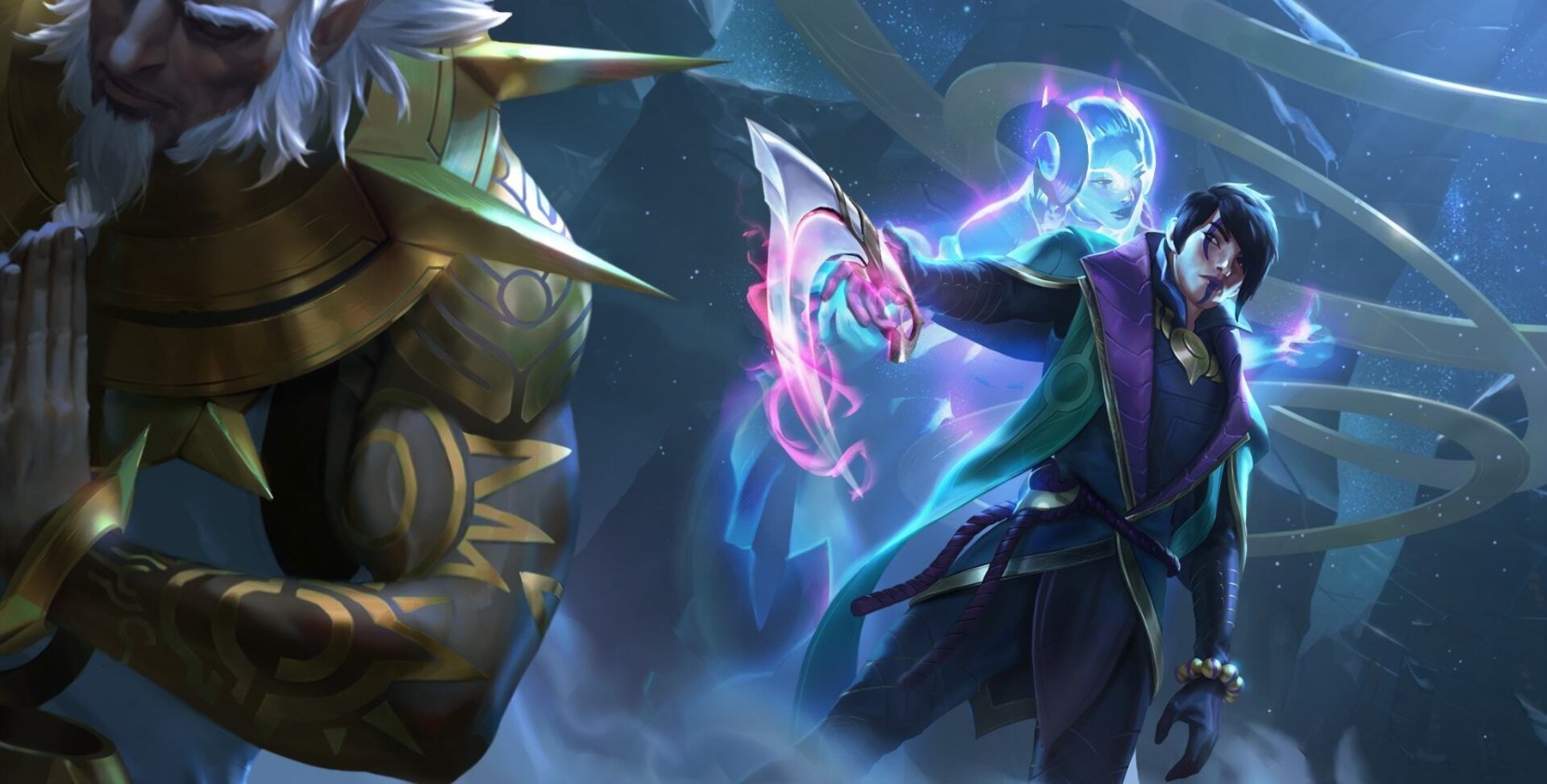 4 Promising Aphelios Deck Archetypes to Keep An Eye On

Deck Guides: How to Play Apheleos

Hey all, Precipic here with some new decks for the new champion Aphelios.

He looks super promising because of how flexible he is in terms of his options for how he plays.

Having the option of grabbing five different spells at any point with him means he will be useful at basically every stage of the game.

Beyond this, Crescendum’s ability to grab a specific 2 mana follower is incredibly powerful because you can build your decks to always pull a specific follower.

When combined with his champion spell, Gifts from Beyond, which gives you any one of his five guns, you gain an effective nine copies of any 2 cost followers that you want. Many of the decks below are built to utilize that power.

Note: In the decklists, there will be 2 cards that are there to represent these two new cards (since they aren’t out yet): Taric represents Aphelios and Star Spring Represents Gifts from Beyond.

If you want to see what Aphelios does and Gifts from Beyond do look at this article here. 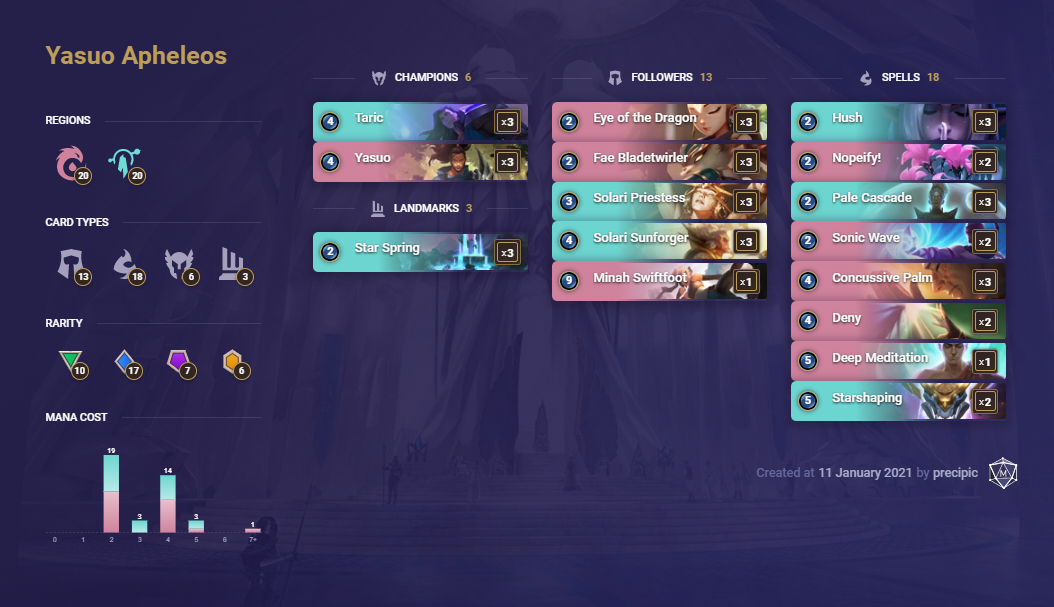 The first deck here is a Yasuo Aphelios deck.

There is actually quite a bit of synergy here. The biggest and most obvious is that Aphelios’s gun Gravitum has 2 instances of Stuns on followers, which gives you 2 Yasuo and Fae Bladetwirler triggers.

However there is so much more, Crescendum can consistently pull either Eye of the Dragon or Fae Bladetwirler, which are completely core as cards to this deck.

You can use Severum to give Yasuo Lifesteal and when he strikes after that you actually gain life off of your Yasuo strikes which almost heals you to full.

Beyond this, giving Fae Bladetwirler Overwhelm with Infernum is a fantastic finisher for a deck like this.

Other than that, it’s a value Targon Ionia deck with all of the tools that you’d expect in that shell and a couple of copies of Deny and Nopeify to protect our tools. 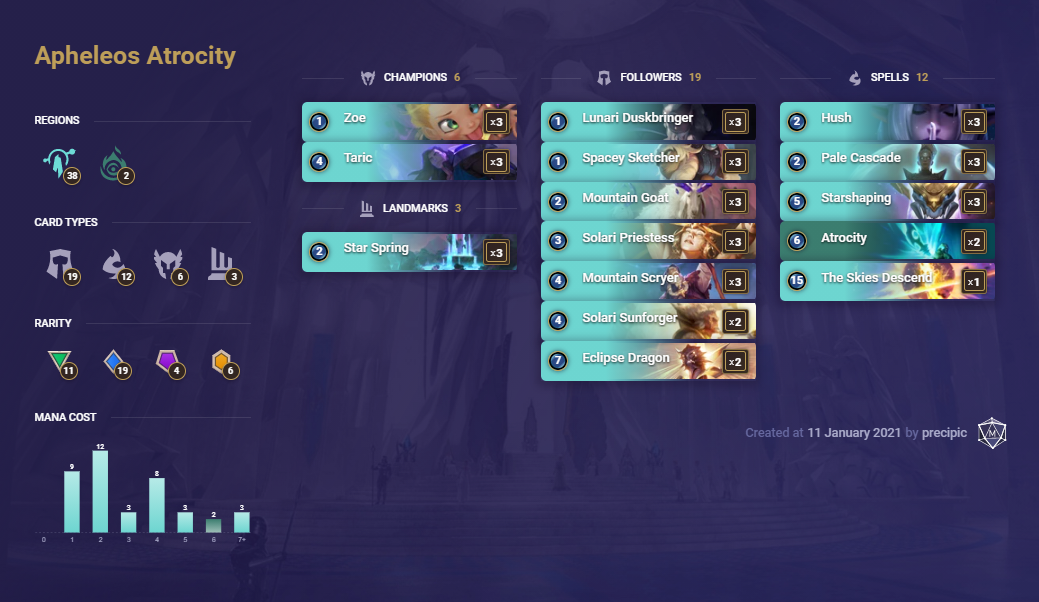 The next deck here is an Invoke Atrocity deck utilizing Aphelios as a powerful stabilizing 3 drop.

Getting Lifesteal off of Severum is basically always GG with any of your big Celestial units because this will nearly always heal you to full health which then buys you time to get your big Atrocity off for the finish.

Other than that, it has a lot of value just in helping this deck stabilize the midgame. In general, this is a solid deck that has already seen play in the current metagame and Aphelios just is a nice tool for it. 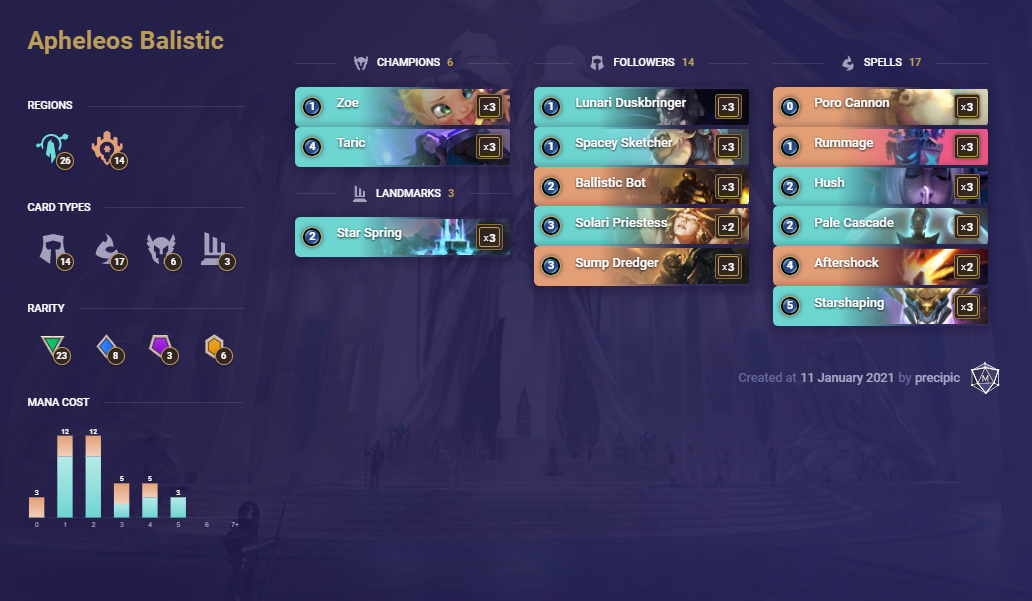 It seems kinda crazy to be playing P&Z mostly for Ballistic Bot but it actually works incredibly well. If you can always draw Ballistic Bot you get to do some really cool things with deckbuilding.

Firstly, we get to run a truly silly number of cards that are only good if you have good cards to discard with Rummage, Spacey Sketcher, Poro Cannon, and Sump Dredger.

Beyond this, Ballistic Bot is kinda nuts with Aphelios’s guns.

The obvious synergy of them getting massive off of you just casting this wide variety of cards is there.

Additionally, Aphelios’s Infernum giving Overwhelm is actually a scary finisher in a deck like this, and Severum giving Lifesteal can bring you back into completely lost games.

Other than that, this is just a very solid midrange Targon P&Z deck with all the highest value cards you’d want in a deck like this. 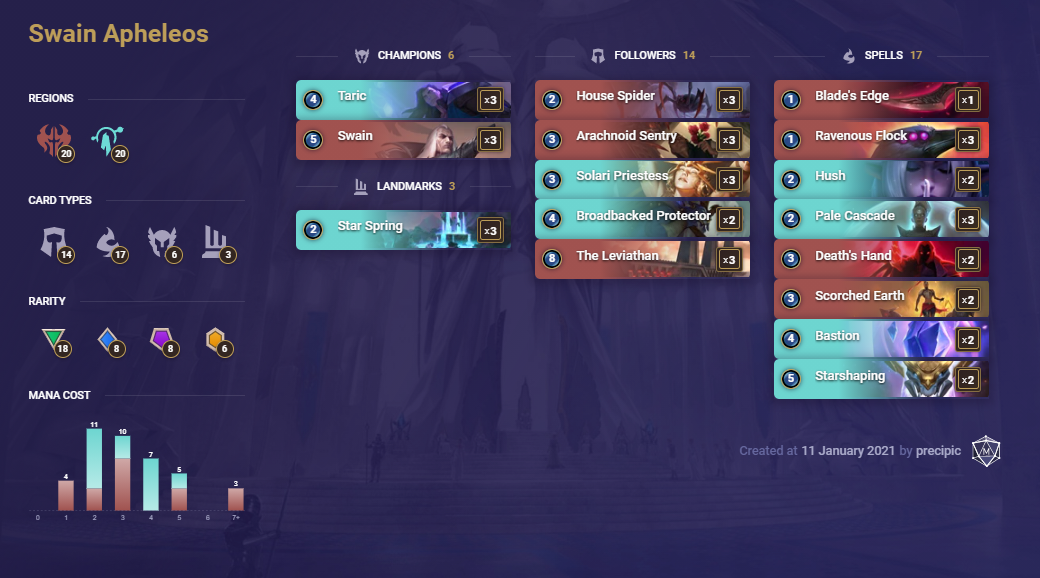 This is the last deck and it’s also super cool – Aphelios and Swain work incredibly well with each other.

Aphelios helps level up Swain because of Calibrum’s ability to deal 3 damage to a follower.

It also gives you the ability to give Swain Overwhelm off of Infernum which can allow you to get a nexus strike off of your Swain even if they can block it.

Beyond this, Severum giving Swain Lifesteal is kinda nuts because if you give it Lifesteal that also affects his nexus strike ability which can basically heal you to full.

The 2 drop of choice for this deck is House Spider which is a great stabilization tool for a deck like this especially with its ability to set up Ravenous Flock.

A couple of weird cards in the deck that I want to explain include, Broadback Protector, Blade’s Edge, and Bastion:

I hope you enjoyed this article, I am super excited to play with this new champion and can’t wait to see what other people come up with for it. See you all next time.

To see the best decks of Cosmic Creation, head to our Tier List, Meta Stats, or Deck Library.