Today’s going to be about Udyr, the Spirit Walker.

Udyr is the third out of four champions revealed this set, joining Galio and Yuumi. 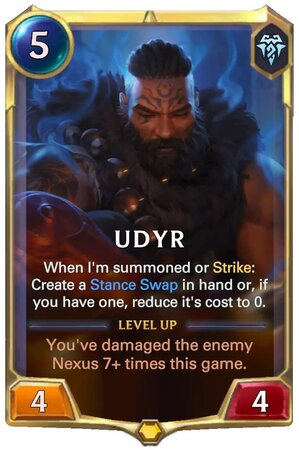 He’s a 5 mana Frejlord engine that generates versatile stances when hes summoned and on strike, somewhat like an Aphelios that needs to attack. When compared to Aphelios that way, Udyr’s level 1 power level seems to be very low. 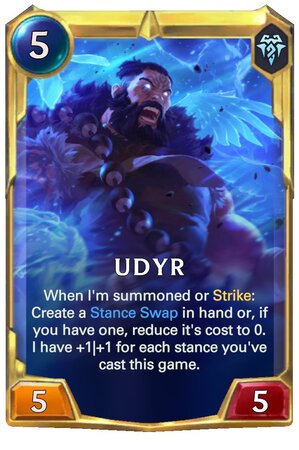 Unfortunately, His level 2 is also very underwhelming. First of all dealing 7 instances of damage to the enemy nexus is fairly hard to do, usually when that happens the game is already in a very favored spot for the Udyr player.

When leveled, Udyr gets +1/+1 for every previous stance played and whenever you play another stance. Since Udyr levels really late, raw stats on him will sadly rarely impact the game.

However, Udyr’s flavor is very similar to how he works in league of legends which is commendable. 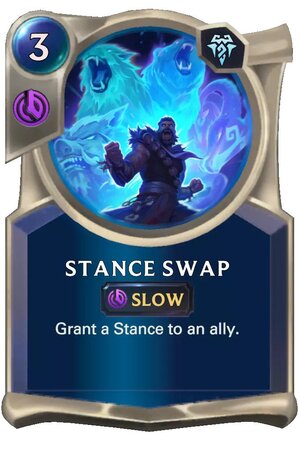 Let’s talk about the stances generated from the card Stance Swap in order from overall strongest to weakest: 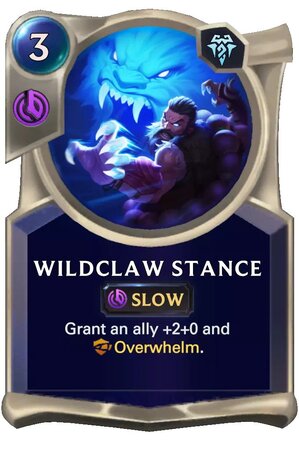 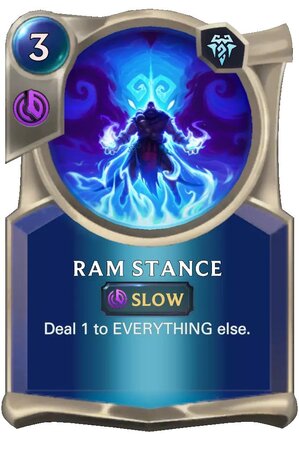 Pretty good card vs aggro and wide boards, it also counts for Udyr’s level up since it deals damage to the nexus. 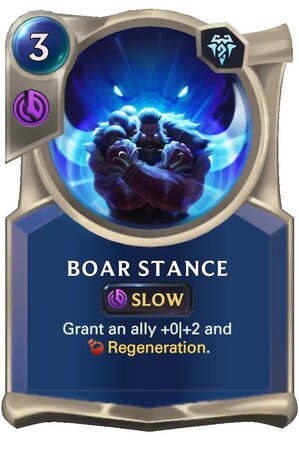 Regeneration is important on units that need to attack, especially Udyr. 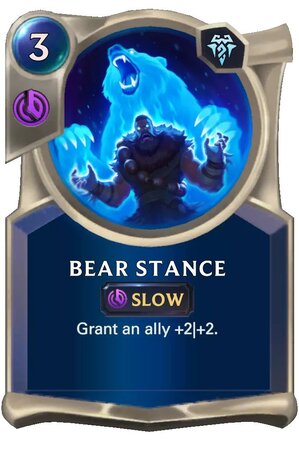 Raw stats at slow speed is very weak in runeterra since you would rather keep mana for combat tricks during combat and not before. 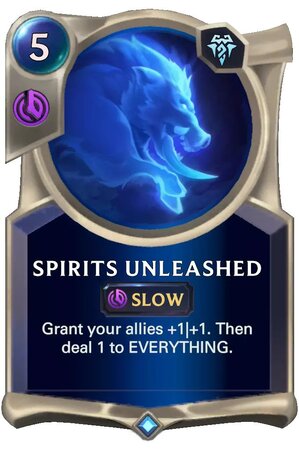 More bad news for Udyr. Slow speed 5 mana spell for +1/+1 stats and the same effect as Ice Shard doesn’t seem very worth it. This card could easily be 4 mana for the same effect and would still have a hard time seeing play.

Apart from the low powerlevel, Spirits Unleashed doesn’t really synergize with Udyr since it’s too expensive for 1 level trigger and Udyr decks are rarely going to have wide boards to take advantage of the +1/+1 stats. 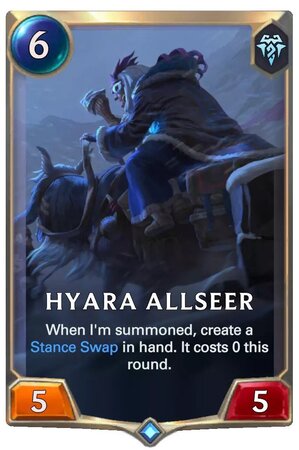 Hyara Allseer is a great card, think of it as like a flexible Alpha Wildclaw.

It doesn’t need to attack or strike to get the Stance Swap unlike Udyr and using Wildclaw Stance on it makes it a 6 mana 7/5 Overwhelm which is really good overall.

This card is definitely going to see play in Udyr decks since it counts for his level 2 form and could even be used in other midrange Frejlord decks for its pure versatility. 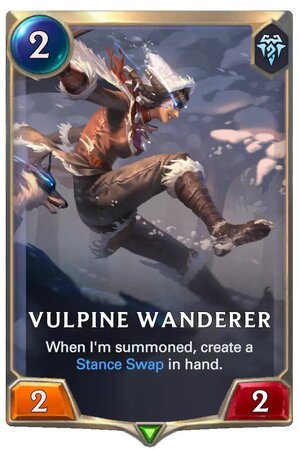 I’m really happy to see a new playable 2 mana unit for Frejlord. This cold region doesn’t have enough card generation so Vulpine Wanderer is perfect for many Frejlord archetypes.

This card is comparable to Conchologist, the 2 mana 2/2 from Bandle City that generates a 3 or less mana spell. Conchologist is seeing play in almost every Bandle City deck and I’m expecting Vulpine Wanderer to be as popular. 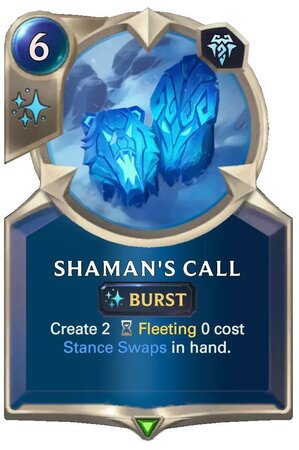 This is one of my favourite cards from today’s reveals. It’s a 6 mana burst speed spell that generates two 0 cost fleeting Stance Swaps. Shaman’s Call directly works with Udyr decks since it provides two Stances and therefore gives Udyr’s levelled up form +2/+2.

It can also be used to level up Jayce or get 4 0 cost Stances when he’s already levelled up or with Lux as an amazing Final Spark generator at burst speed.

Wrath of the Freljord 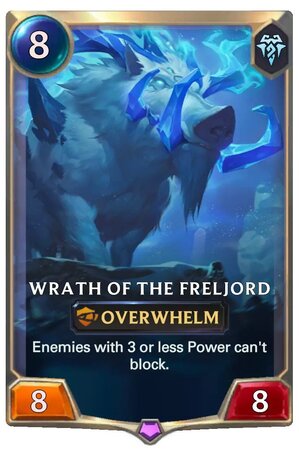 Wrath of the Frejlord has a very unique effect, it’s an 8/8 overwhelm follower that basically gives a better version of fearsome to all allied units since it doesn’t allow the opponent’s 3 or less mana units to block.

This card could single-handedly enable some fearsome archetypes with Shadow Isles and can be used with wide board high statted units that would otherwise get chump blocked by cheap blockers. 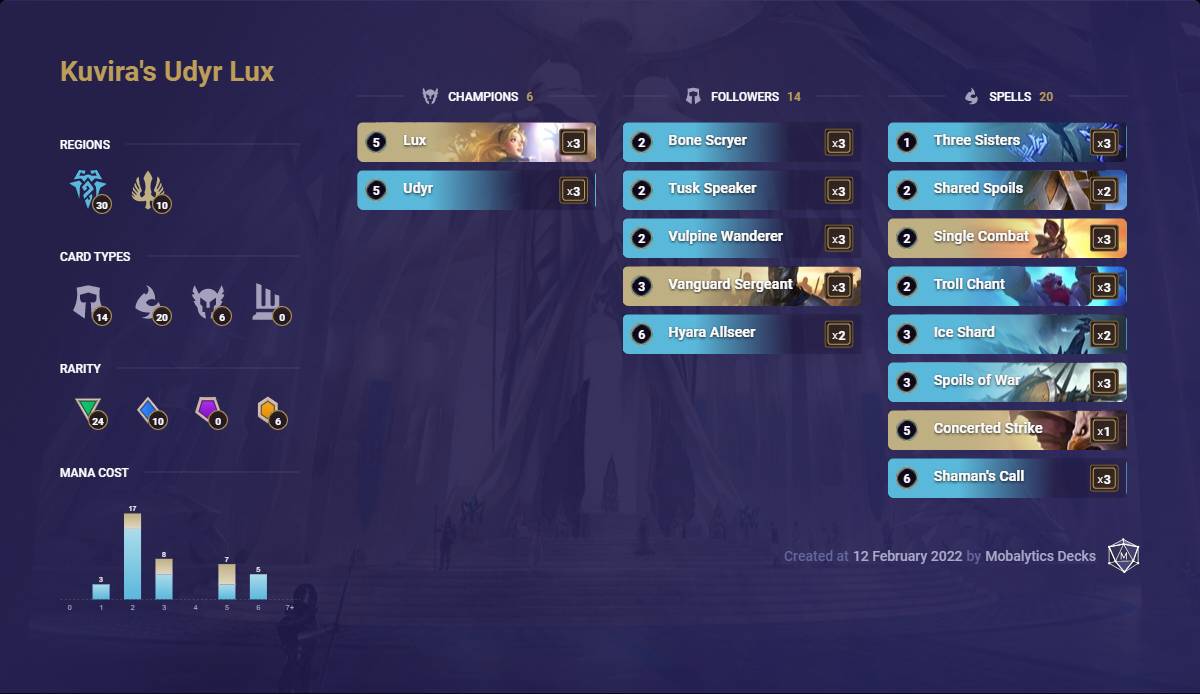 The first thing that crossed my mind when I saw Shaman’s Call was Lux. Generating 2 stances and getting a free laser is a lot of value overall and can easily swing games.

This is a midrange value based deck that uses Lux and Udyr as the main value engines + finishers.

Levelling Udyr isn’t the goal of this deck, we’re basically using him as a pressure tool that generates spells for Lux.

Overall, even though Udyr seems a bit weak at first glance, I’m confident that the last Frejlord champion we’re getting this expansion will synergize with him really well.

I hope you guys enjoyed today’s reveal! I’m planning to make as many Udyr decks as possible since I love Frejlord so make sure to dm me your crazy deck ideas on Twitter!