The current meta may be dominated by a few top dogs, but we’ve got a brand-new set of cards coming in hot to shake things up.

I’m Jordan “WhatAmI” Abronson and whatever deck archetypes you enjoy I’ve got some new brews ready for you for day one of ladder.

Whether you are looking for some low to the ground beats, some degenerate unit stacking nonsense, or some control looking to weather the storm, I’ve got you covered.

Let’s check out who our companions will be for this next adventure together. 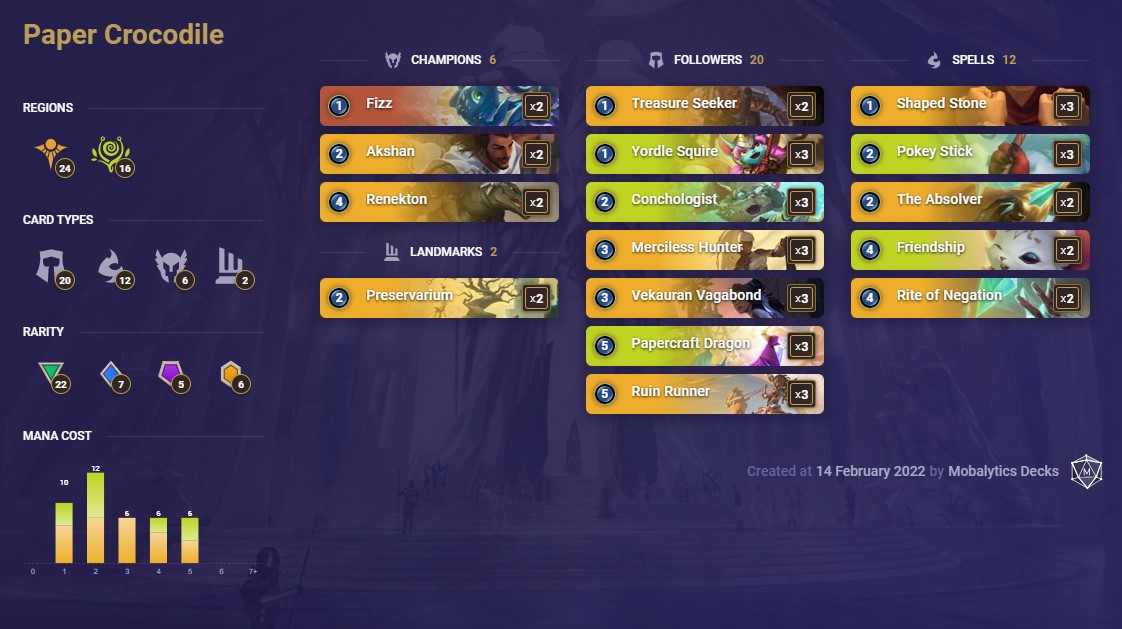 Does anyone remember the absolute degeneracy of double-striking Ruin Runners that Ionia-based Sivir brought us? Well, this deck is a call back to those days when the first Rubin pile ruled the roost.

Papercraft Dragon maybe five mana but I think that it will be five mana well spent when you are crashing in for sixteen overwhelm damage on turn five or six. Renekton is happy to carry the banner if there’s no lurking hard removal, and if there is then Fizz and Ruin Runner make it look rather silly.

While we do curve relatively low to the ground this deck is as much combo as it is control. There’s a solid card draw and with Friendship and Rite of Negation you can set up to protect your kill turns quite nicely.

Aggro and combo in the same deck have traditionally heralded some of the most impressive degeneracy in this game. So, whenever I see them start to collide again I take notes and file it away like a deck to watch. 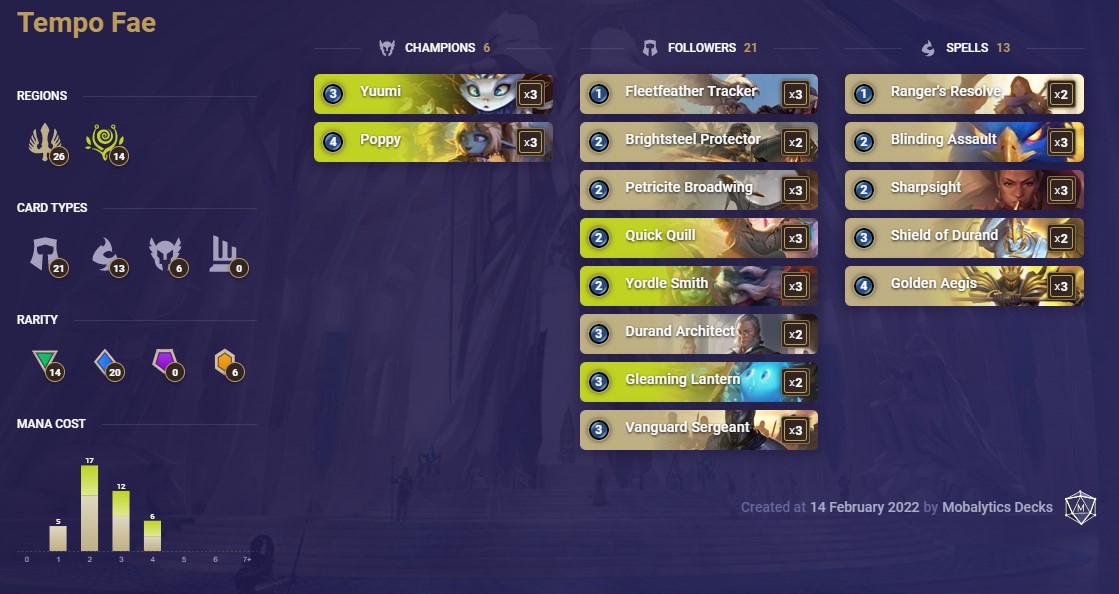 About two seasons ago Demacia/Bandle City was one of the most broken things you could be doing. Yordle in Arms was bad enough, but when you rallied on top of that the game ended on the spot.

Well, almost every card in that archetype got nerfed, but we’ve got some new toys to play with that fit the same mold. The amount of board pressure that can be generated from giving your Challenger units Quick attack is immense.

And they don’t even need it if Yuumi makes them gigantic enough to simply smash through. This may be one of the few decks that will reasonably consistently level the little cat. Yuumi on Valor is a pretty nasty combo that will get her flipped in a hurry while destroying your opponent’s board in the process.

We’ve also got the traditional win conditions for this archetype of either Poppy or Vanguard Sergeant combining with a rally effect. A solid pick on day one for aggro enjoyers looking for that new spice. 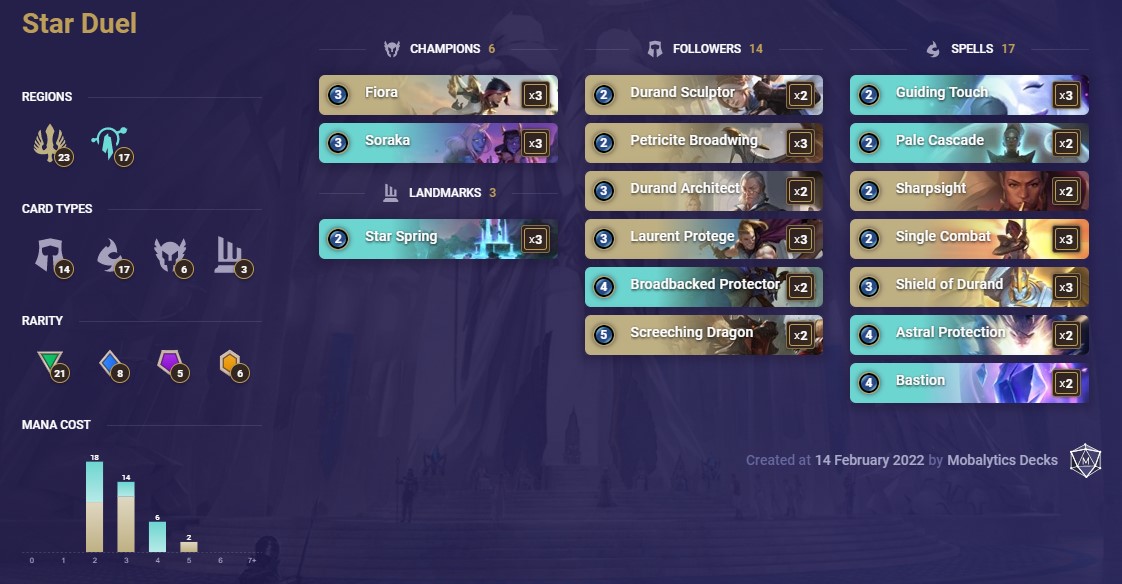 But what if you’d rather counter all the tiny spammy units than getting ready to use them yourself? Don’t worry, Fiora is back with some very solid new support cards and is just as adept at ever at punishing anyone who wants to play with small unit boards.

This time she is backed up by everyone’s favorite card drawing menace in the form of Soraka. The starry-eyed healer is finally unchained from the self-damaging units of Bilgewater by the preponderance of Challengers Demacia offers. Do you need to damage things? Throw them into combat.

Your dual win-conditions of Fiora and Star Spring will give people trying to counter this deck fits. Not to mention the sneaky third plan of Durand Architect letting Soraka swing in for eight-plus points of damage if your opponent isn’t careful.

This deck has interaction, protection, and best of all flexibility. Is Pantheon getting you down? Hush has got your back. Big units a problem? Maybe find room for Concerted Strike or Sunburst. These factors combined put this one high on my “to test” list for day one. 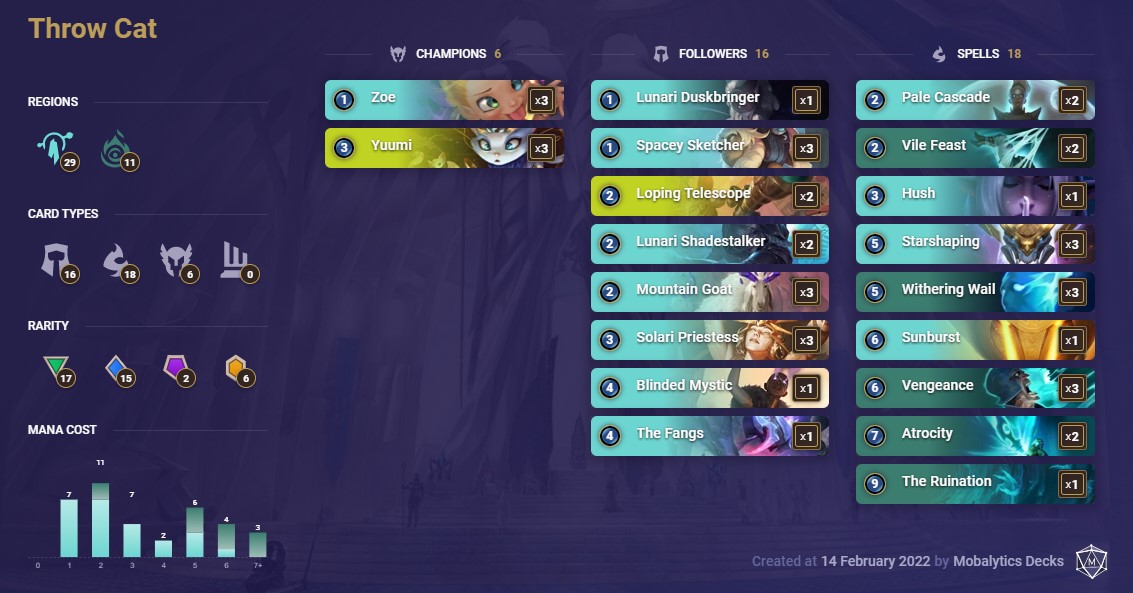 Alright, I held off as long as I could but you all knew it was coming. Yuumi is a lot of things, but at the end of the day, the most relevant is that she is a giant pile of stats. And what do we do with giant piles of stats? We throw them at our opponent’s face of course.

This is the traditional Targon/Shadow Isles shell you’ve seen me try every season with a few new twists. Yuumi can come down on either of your two Elusive units or sometimes The Fangs to solid effect. Barring that she can make any of your Invoke hits that much larger.

I’ve ranted enough about this deck over my time in Legends of Runeterra, so I’ll keep it short here. But imagine the absolute terror of facing down a Zoe with a Yuumi attached going into turn three. Time to start packing those pings again. 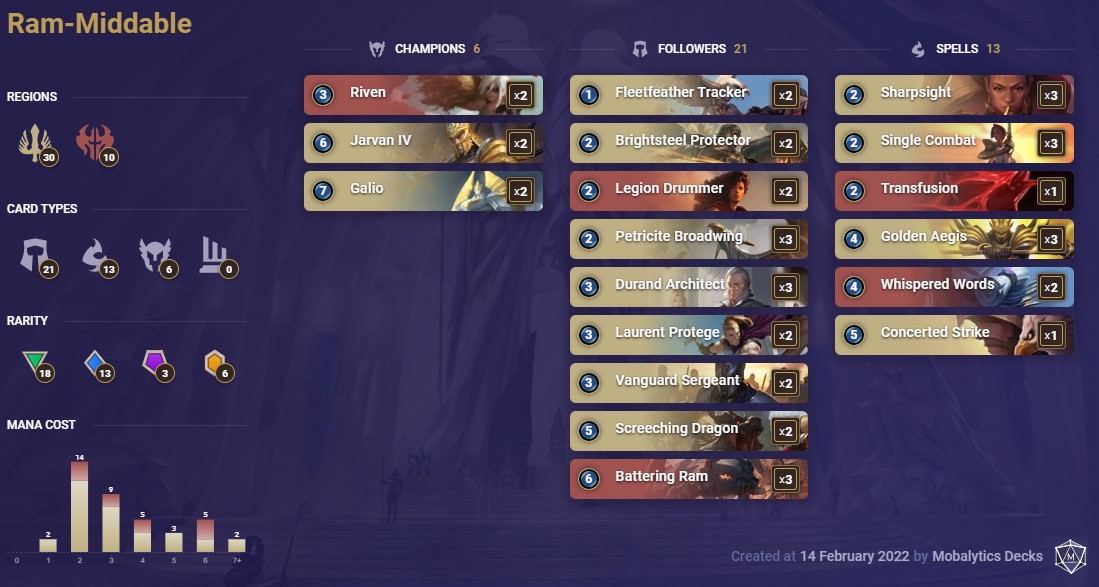 So this is going to start out looking like something that is significantly more meme than dream. That said, other than just attacking with a fourteen power overwhelm unit on turn six, I’d like to look at what happens when we don’t do that.

The amount of synergy here is still pretty impressive. We’ve got solid board control with our challengers, and any of our leveled champions will threaten to end the game impressively quickly.

Rally in this kind of deck will feel like casting it did in old-school Shen/Jarvan. Your opponent’s board will disappear and you may end the game on the spot if Battering Ram is around to help.

I’m not entirely convinced of the power level here, but neither am I un-convinced if you hear what I am saying. I will be devoting some testing time to this potentially powerful pile of nonsense. 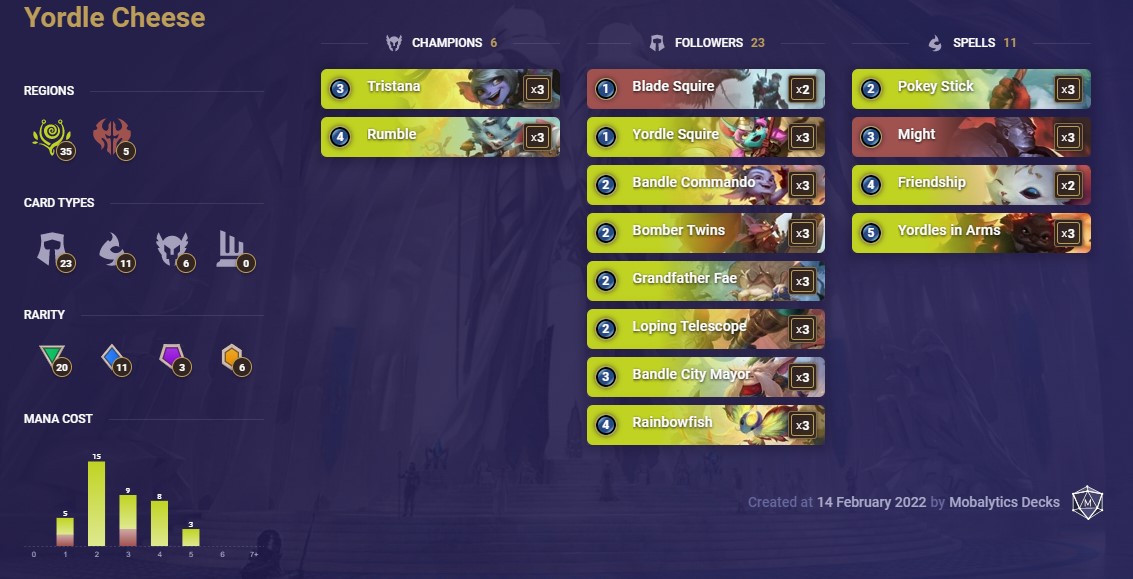 Tristana and Rumble have always kind of had the same problem. They get impressively beefy and then just can’t find a way to power through into the enemy nexus to win the game. We’ve tried a bunch, but the new addition of Rainbowfish is granting me hope again, or at least Elusive.

Between Might, Rainbowfish, and just going unreasonably wide with Yordles in Arms this deck attacks along with several powerful and synergistic angles. You’re not the most interactive, but you force your opponents to be instead.

New standout Friendship is also here to help your combo turns. Just when your opponent thinks they are safe after stripping Spellshield off of Rumble you can re-up it to close out the game.

I’m unsure on the meme versus dream quotient here, but enough powerful things are happening that it’ll get a test. And come on, who doesn’t like giant Overwhelm yordle value piles? 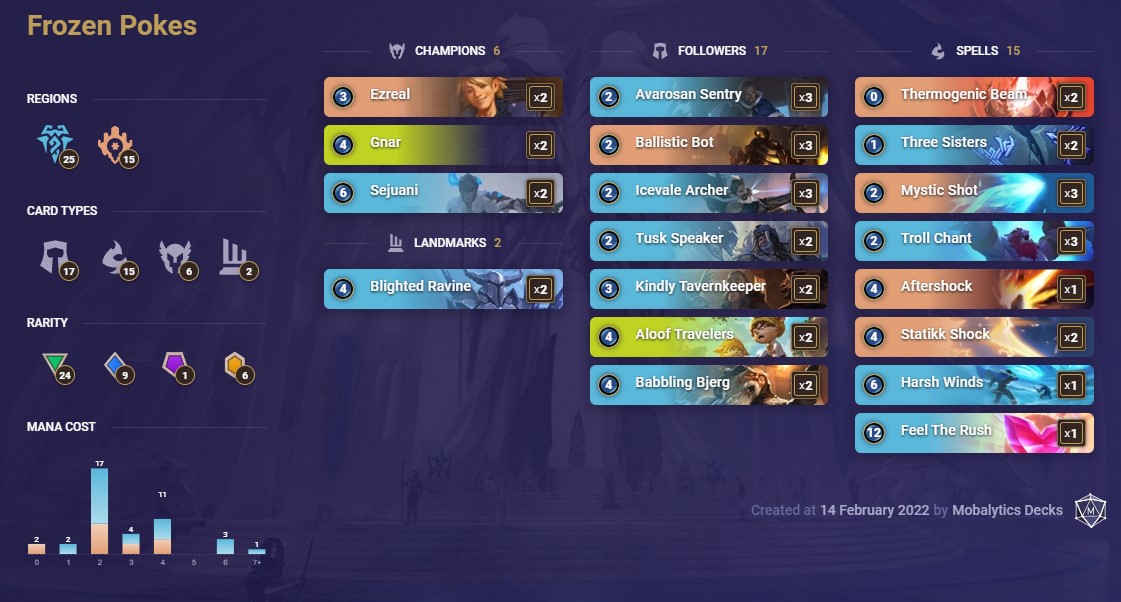 There are plenty of different places Gnar can go as he looks to have a pretty impressive base power level. However, the ping generation fits two champions at once quite nicely. With Babbling Bjerg to give you effectively four Sejuani, you can even activate all of your synergies consistently.

This is an interesting deck that will get to flip back and forth between control and aggression depending on its matchups. Midrange Frez-Real has historically been quite powerful when the cards are there and the meta is right for it.

I don’t know what the second half will look like at all, as trying to predict that from here sounds like an exercise in madness. However Gnar, and also the new addition of Tusk Speaker fit this archetype quite nicely, and I’m excited to see how they perform. 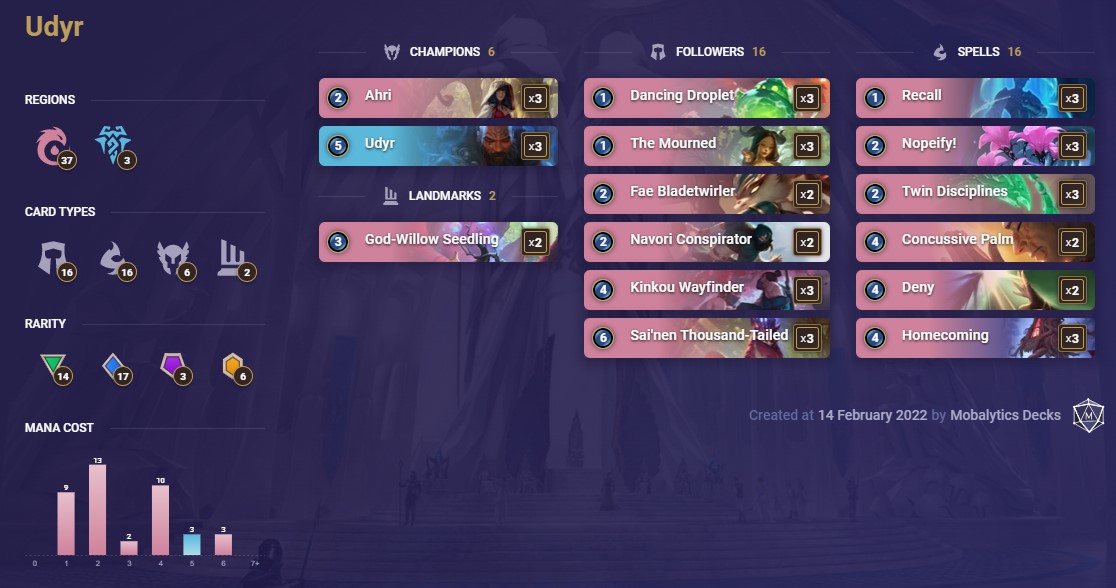 Wait, you guys actually want me to try to build an Udyr Deck? Fine… 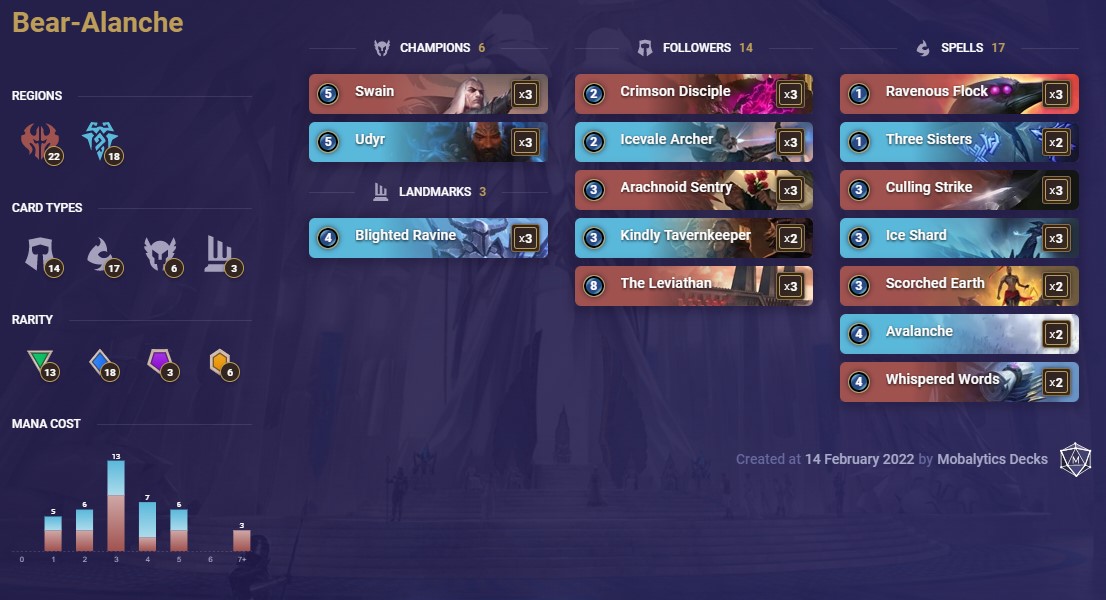 I think if Udyr has a chance anywhere then it will be because he is an ancillary win condition to a different primary game plan that can synergistically assist it. When in doubt, more Ice Shards.

This deck has always been a solid choice for swarm-based aggro and Demacia in general. Udyr is just a solid five drop that can help with your board sweeping capabilities or, if you’re feeling frisky, drop Overwhelm on a Swain and swing for the fences.

It seems likely that the power level is still lacking here, but we gave it the old college try, and any Udyr enjoyers out there should have a solid stepping-off point. Also, I cannot deny that getting to Culling Strike Galio on day one is going to be a hilariously good time.