7 Worldwalker Launch Decks You Should Try

7 Worldwalker Launch Decks You Should Try

The last meta was shifting and changing right up until the very last minute. Now though, it is time to bid it adieu and welcome the new Runeterran champions who will walk the world.

I’m Jordan “WhatAmI” Abronson and whatever deck archetypes you enjoy I’ve got some new brews ready for you for day one of ladder.

We’ve got solid midrange, unreasonable burn, and even the odd control deck hanging around for the true degenerates.

Let’s check them out! 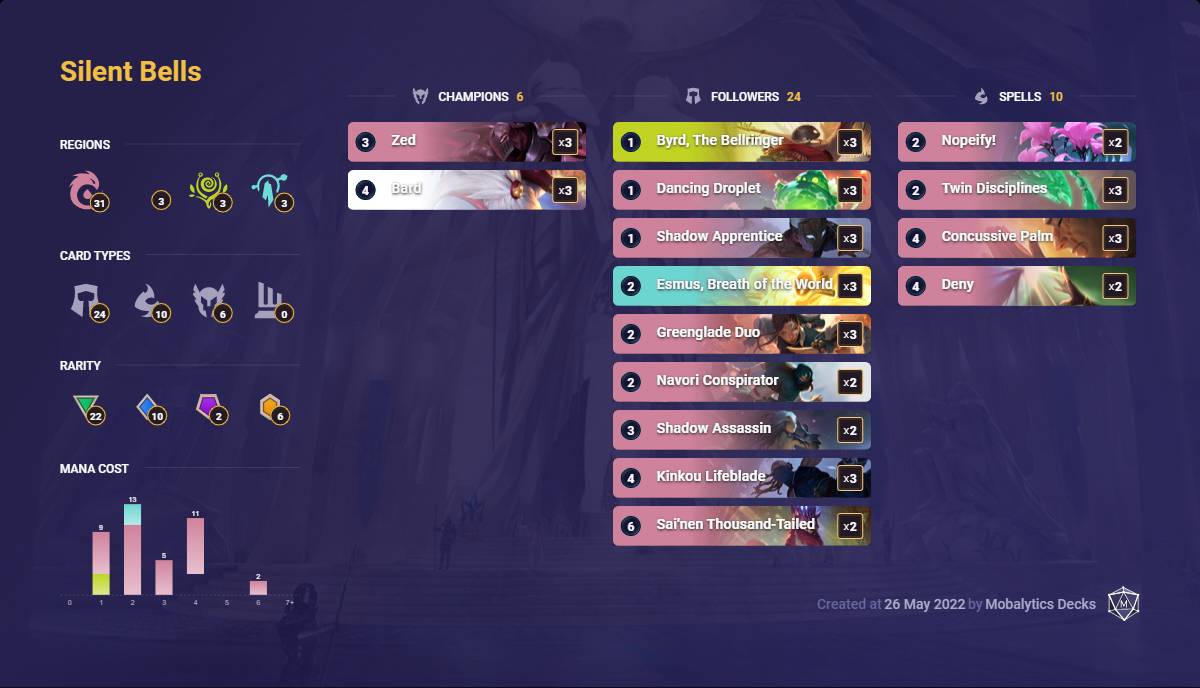 Speaking of Runeterran champions, our first deck of the day features one front and center. Bard is here to grant all his friends the power of the Chimes. And what better way to use those lovely additional stats than with Elusive nonsense?

This deck is packing nineteen Elusive units for Bard to do his tricks with, and an additional three Zed on top of that. Anyone who was around during the Zed/Lee Sin era knows that a buffed-up Zed is a game-ending threat all by itself.

We’ve also got just enough room to squeeze in the traditional Ionian tempo tools to keep ourselves alive long enough to bring our opponents down. Giant units can be stunned up, and spells great and small can be ignored courtesy of Deny and Nopeify.

Last but not least our curve tops out with Kinkou Lifeblade, an almost impossible wall for an aggro deck if it gets even one or two Chimes, and Sai’Nen, to buff our board, draw those chimes, and refuel going into the late game. This one could be a force to be reckoned with. 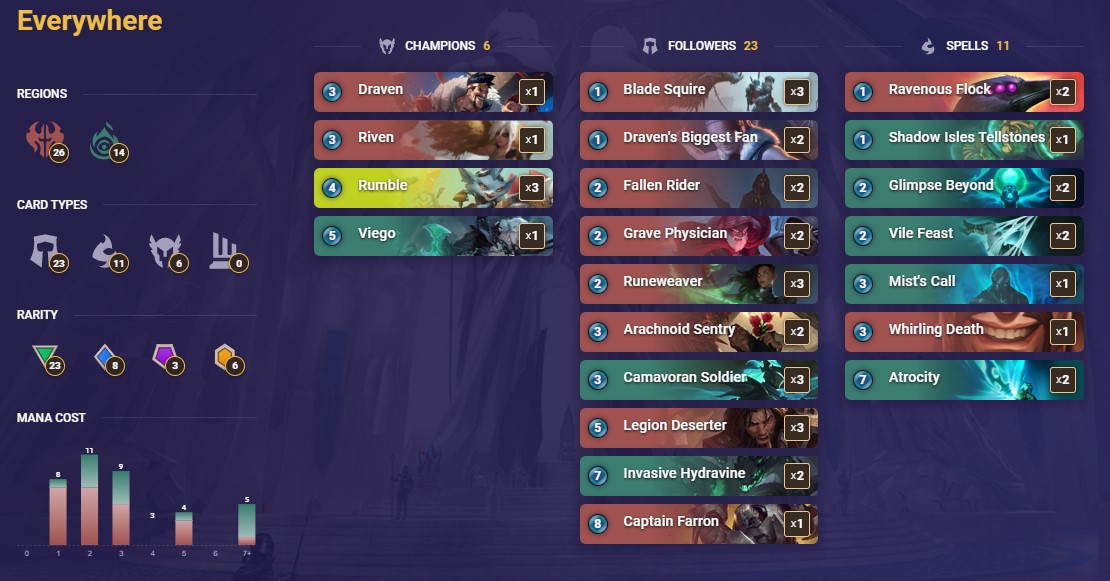 Alright, so this one looks a bit meme-tacular, but hold on with me here for a second. Legion deserter gets to be a Spell Shield, Overwhelm, Quick Attack unit if you played Rumble, and gets double pumped by every Encroaching Mist you manage to land.

We have a quite reasonable early game as we set up for that nonsense too. Plenty of bodies to get in the way or get in for their chunk of damage if no one is paying attention to them, and just a sprinkle of powerful removal to get the job done.

The top end of this deck is just nasty, going beyond even giant Spell Shielded Legion Deserters to Captain Decimate himself, and the ability to simply Atrocity our opponent from unreasonably high life totals. Even a simple Hydravine will require an answer or grow out of control.

This one is definitely asking for some serious refinement, but if it can get it, I think this is one meme that has a chance of getting some work done. The ceiling is sufficiently high that if we can even out the floor, there is almost certainly something here. 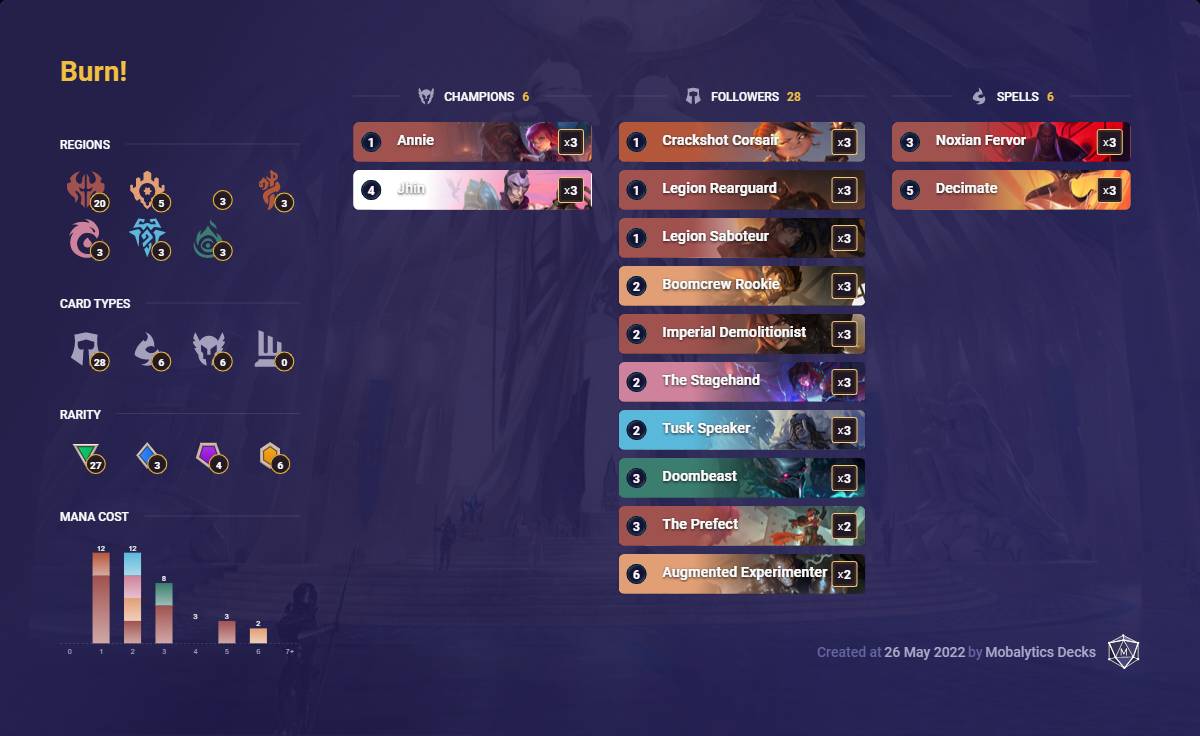 Alright, I know that nobody really wanted to talk about it, but the elephant in the room will only wait so long. I feel obligated to acknowledge that this deck is likely to be insanely powerful and will shape and warp the meta as long as it is around.

The entire deck is full of hard-to-answer burn and tempo threats that simply do not care about what the opponent is doing and will take up that lack of caring directly with said opponent’s face. If you’re not targeting this deck, you’re almost certainly losing to it.

Aggro players have had a rough time for a while now finding the third deck for their burn-centric lineups, and that is one hundred percent no longer the case. Look no further, Annie is here and all shall fear. 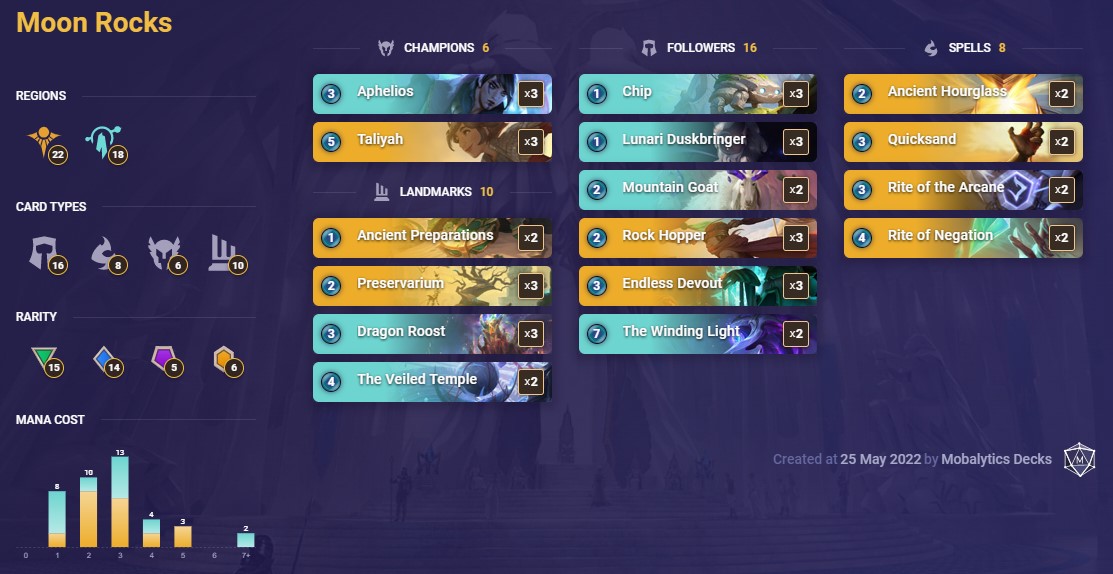 This one is an old favorite of mine given new life by some powerful additions to the archetype. The idea of copying The Veiled Temple with Taliyah to get unreasonable amounts of tempo is a great one, but was always a tad inconsistent, even before the temple’s nerf.

Now with a secondary amazing target, Dragon Roost hanging around it might be time to take another look at this idea. It might be a touch slow, but anyone who doesn’t kill you is going to have problems staring down a pair of Inviolus Vox on turn six.

The other new standout in this region is The Winding Light. Between it and Infernum you’ve got solid and consistent ways to overwhelm your way through the opponent’s defenses and end games. This one will definitely go on my to test list for week one of the new expansion. 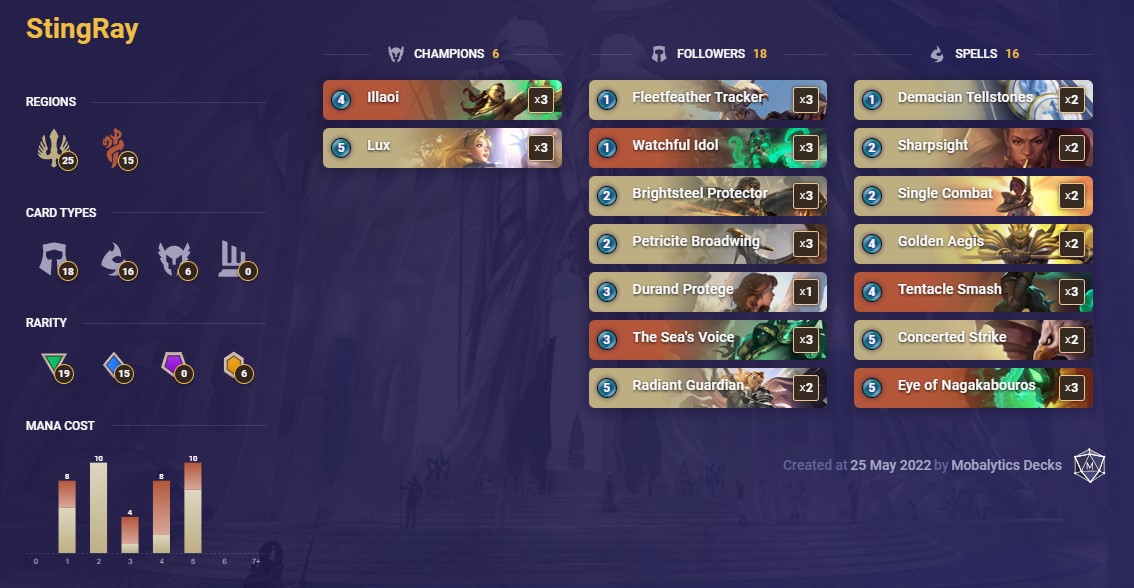 One of the first things I noted about Illaoi is that her spells and support package are almost certainly stronger than she is. Not that she’s not here to make them even better, but they may well be good enough to be played on their own, and definitely with another lady who loves spells.

Another important consideration is that Annie has a distinct weakness amid all her broken nonsense, Challenger units. Being in a spot to have your birds descend and pick off your opponent’s aggressive one drop, regaining tempo, is going to be a huge deal in the opening days of the expansion.

Beyond that, though this is a solid midrange deck with multiple ways to win and a slightly unreasonable amount of removal. Getting to finally play solid draw spells in a Lux deck is just the cherry on top of what I suspect will be quite a powerful archetype. 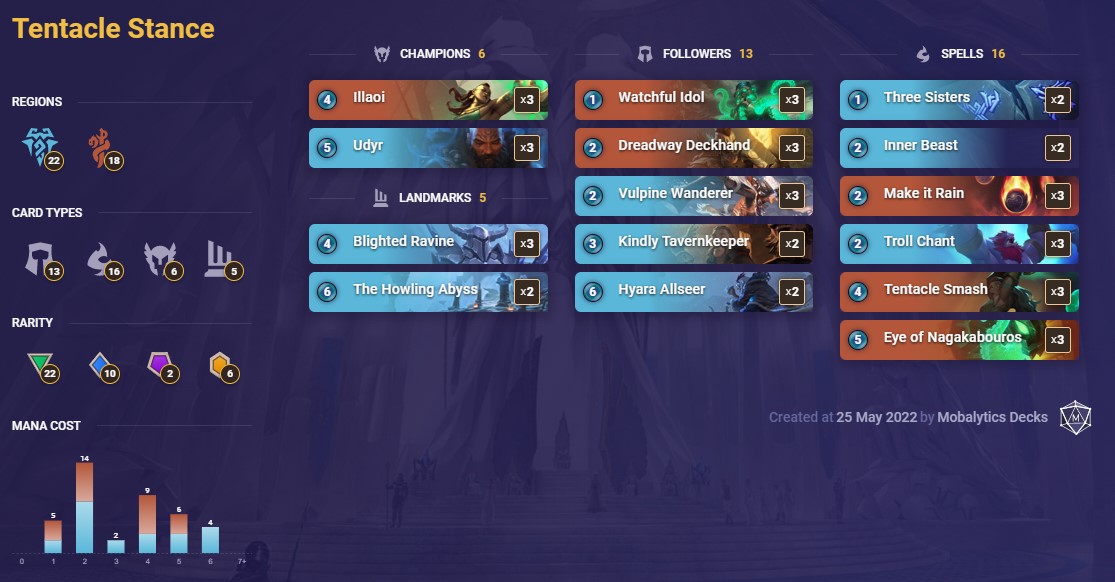 We can take it even a step further though. Sometimes you just really don’t want to deal with tiny spammy units trying to run all over you. When that time comes Blighted Ravine is a girl’s best friend. Heal and clear a board at the same time? Yes, please.

Our game against most decks will end with a giant Illaoi and/or Udyr rumbling over whatever defenses our opponent has been able to muster. However, as this deck often struggles against Vengeance, we’ve put in The Howling Abyss for some backup win conditions.

There are probably more efficient and powerful ways to build an Illaoi archetype, but I have to say, I am more in the anti-aggro mindset than I usually am. There is just something appealing about playing Blighted Ravine on day one of a new expansion after seeing Annie headline it. 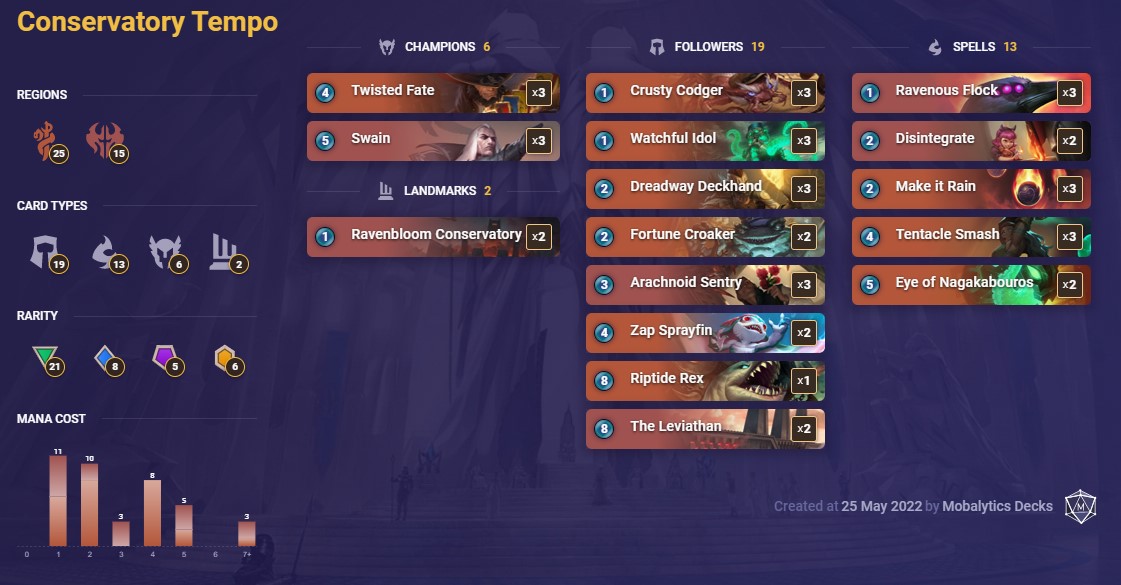 Last but not least I want to showcase an old idea with a new twist. I think there are finally a sufficient amount of self-damaging creatures for Swain to consistently come down leveled up on turn five or six. At that point, he can just be his own huge threat, regardless of any other nonsense.

But don’t worry, other nonsense we have in spades. There’s always been the threat of Leviathan locking an opponent, but now Ravenbloom Conservatory is here. If you thought Riptide Rex was unreasonable before, just wait till you play it with Tybaulk buffing the volleys.

Last but not least we’ve added Disintegrate to our cast of solid removal spells. This takes away one of the prime weaknesses Noxus control always had, an opponent open attacking with an undamaged large unit. Make it Rain plus Disintegrate now takes care of that quite nicely.

All in all, this one definitely wants some refinement, but the concept is quite solid. I would not be surprised to see some version of it do quite well on the ladder as we move forward into our new season.