Hey everyone Kuvi here, today I’m gonna show you 7 different new decks to try on ladder with the new champs and cards from the latest LoR expansion Worldwalker.

This expansion is one of the most successful ones we’ve ever gotten, almost every new champion feels competitive and is very fun to play.

Most of these decks are competitive enough to be used to climb to Diamond/Masters from any starting rank. But they’re also great if you’re just looking to have fun and try new cards. 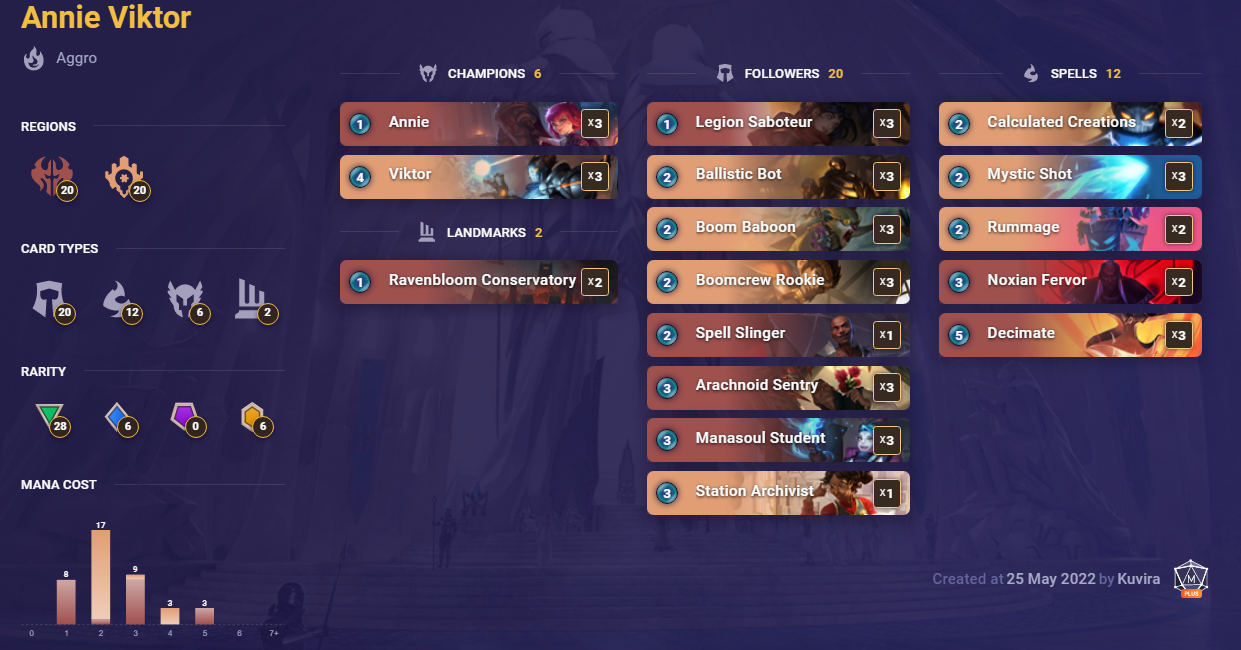 I was wrong about Annie, she’s actually pretty good and versatile, she’s amazing in multiple aggro lists, midrange, and even control.

The first list right here is a burn aggro Annie list. This deck uses Viktor and Ballistic Bot’s generated skills to level up Annie extremely fast. The skills also level up the new landmark, Ravenbloom Conservatory which gets you the game-winning follower Tybaulk. After you play Tybaulk, every single damage dealt with ignition from Ballistic Bot, Manasoul Student, Annie, Legion Saboteur, Boomcrew Rookie, Noxian Fervor and Decimate All deal +1 extra damage which helps you burn the opponent even faster.

The early aggro aspect of this deck comes from cards like Annie, Legion Saboteur, Boomcrew Rookie, and Boom Baboon. Station Archivist and Rummage are there for the late game value to find more burn.

Calculated Creations might seem a bit odd here but with Tybaulk, being able to generate another Ballistic Bot with Ignitions that deal 2 damage is huge to finish the game with the burn gameplan. The 1 health on Ballistic Bot should also not be dismissed.

If you like playing fast games and burning the opponent down, this is the perfect deck for you. 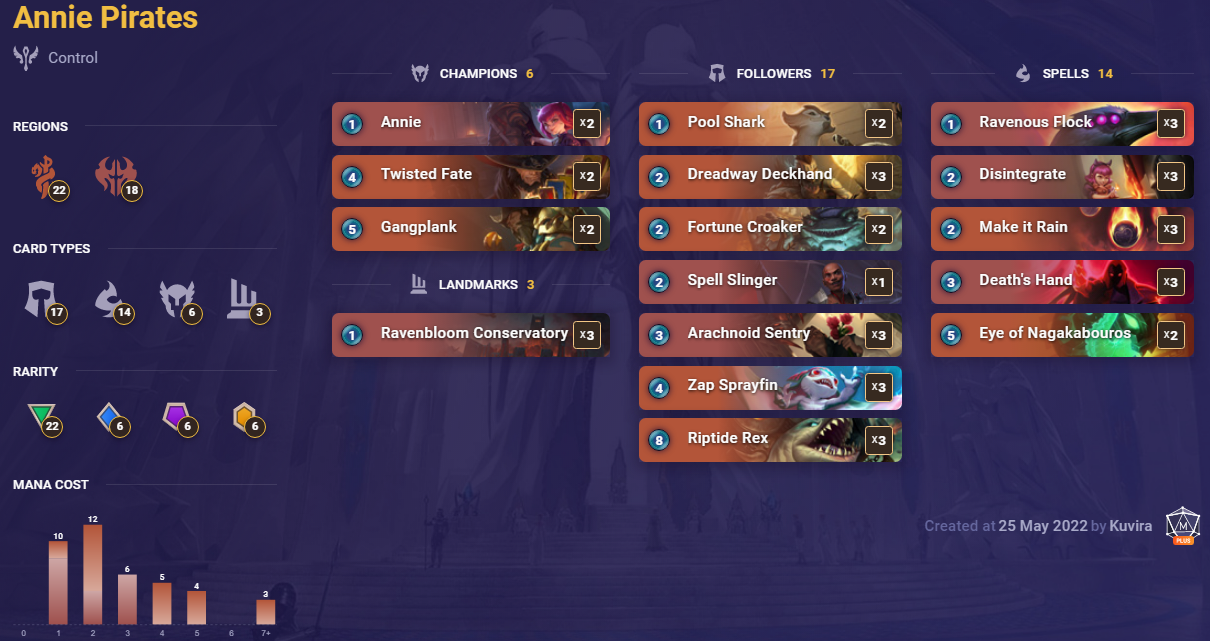 Annie Pirates isn’t an aggro list, this is more of a midrange/control list with the same landmark. Ravenbloom Conservatory in this deck works really well with all the spells; Make it Rain, Death’s Hand, Twisted Fate’s Red card, Gangplank’s level 2 skill, and most importantly Riptide Rex.

Riptide Rex dealing 3 damage on each Cannon Barrage is always going to push enormous amounts of damage and usually finishes the game.

Zap Sprayfin and Eye of Nagakabouros are there for the draw value that also works well with TF. Arachnoid Sentry and Spell Slinger are great defensive cards that can buy you multiple turns.

Against small units, Make it Rain, TF Red Card and the cheap followers will help you control the board. Disintegrate and Flocks are there to deal with the big followers/champions that you need to remove.

This deck is slightly harder to play than the Viktor/Annie list but it’s certainly very fun to play. 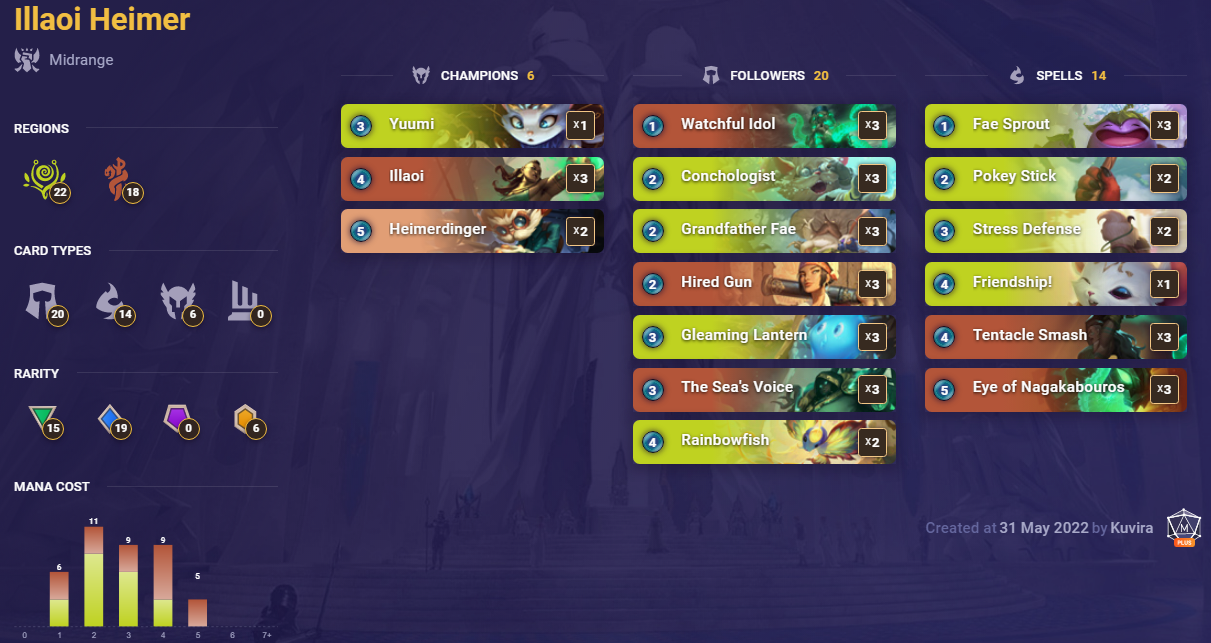 Illaoi Heimerdinger is one of the most underrated Illaoi decks. Using the same reasoning as Lux/Illaoi, Eye of Nagakabouros and Tentacle Smash are amazing spells on their own but they’re expensive, Lux and Heimer work really well with expensive spells because they get you to value and buy you back the tempo lost when playing those spells. In this case, Heimer is a great tool to stabilize the board and generate value.

This deck has many threats, Illaoi, Gleaming Lantern, Rainbowfish, The Sea’s Voice, and Yuumi. All of these can be very hard for the opponent to deal with especially when there’s more than 1 threat on the board. 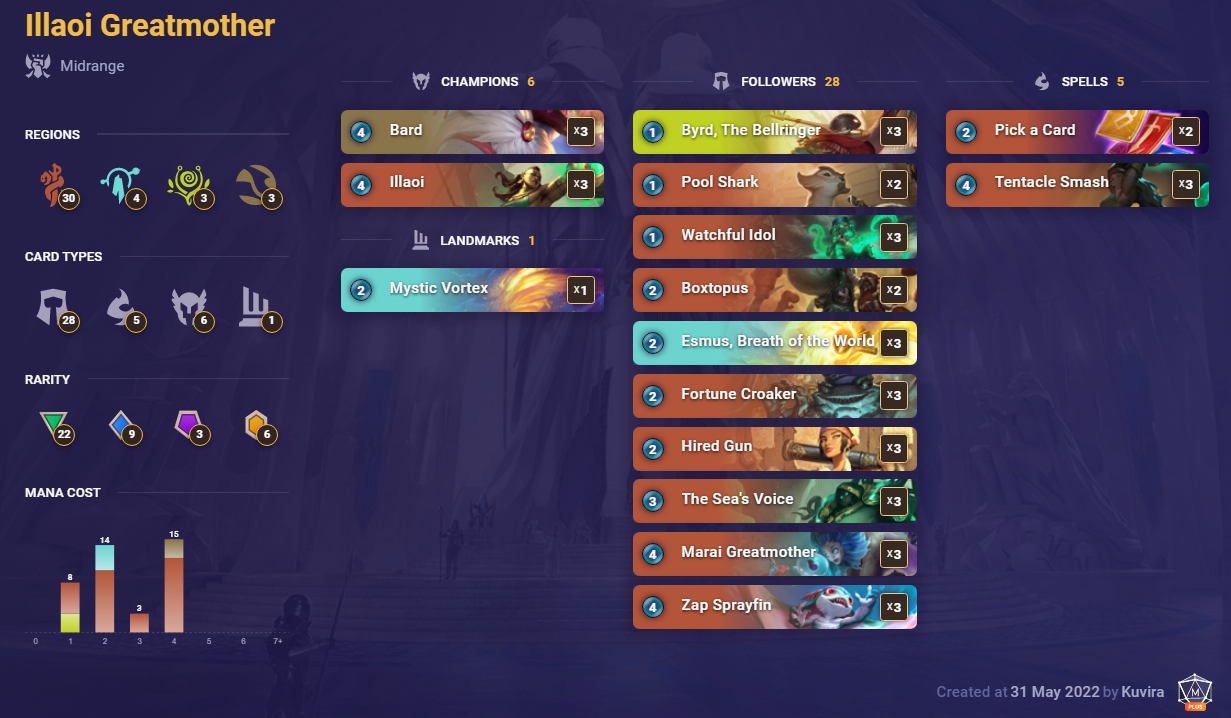 This deck combines two new champions, Bard and Illaoi. It focuses on giving stats to all your units with Chimes to outvalue the opponent with trades and finish the game with either Illaoi combos or spells from Marai Greatmother.

The lack of cheap spells in this list is intentional, you always want to play Zap Sprayfin after playing Marai Greamother to draw the discounted spell that can be game-winning, in this video, I drew a 3 mana Skies Descend that won me the game.

The Illaoi package is a great tool to finish the game especially if Illaoi got hit by multiple Chimes while in hand. 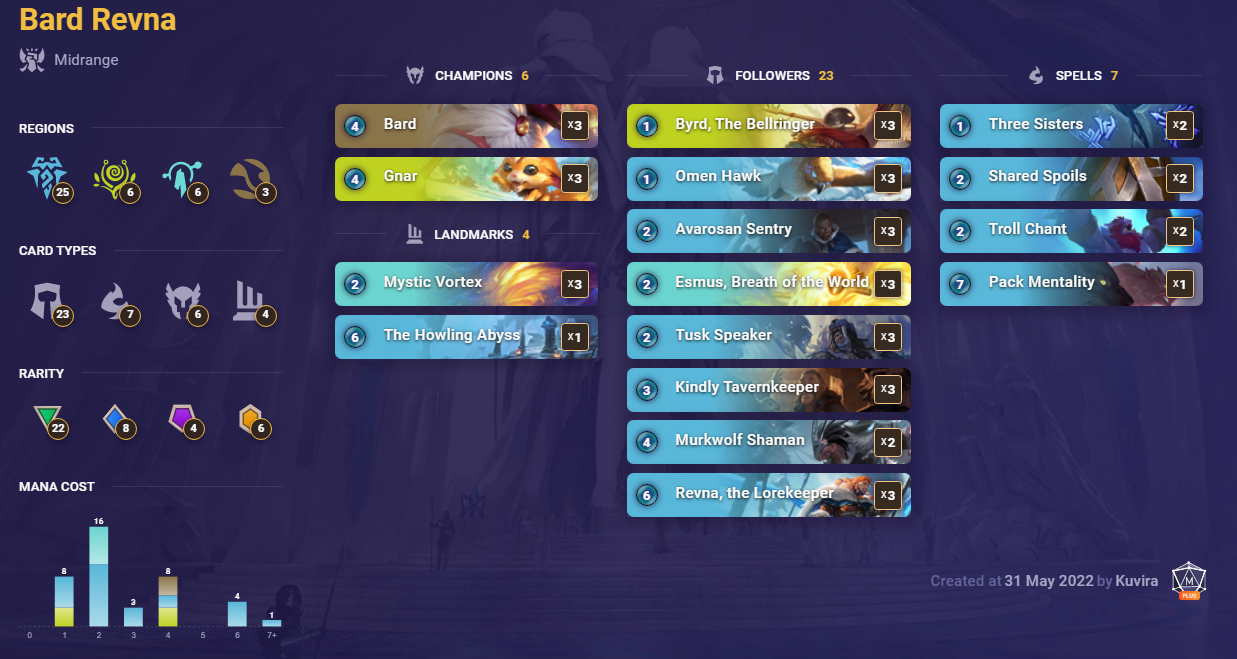 This is a Bard Revna, the Lorekeeper deck that I made very recently. Hitting Chimes on Revna is game-winning. This is a midrange deck that focuses on outvaluing the opponent with stats and draw.

Frejlord doesn’t have that much draw but we’re playing every single card with that effect, Avarosan Sentry, Shared Spoils, and Murkwolf Shaman.

Gnar is a key card here since he’s a great body for Chimes hits and he generates Pokey Sticks. Since Draw is essential in bard lists, the Pokey Sticks are necessary to guarantee our value game plan and draw more Chimes.

Never play Tusk Speaker early, you want to keep it to activate Shared Spoils and Murkwolf Shaman especially when you don’t have Pokey Sticks from Gnar. 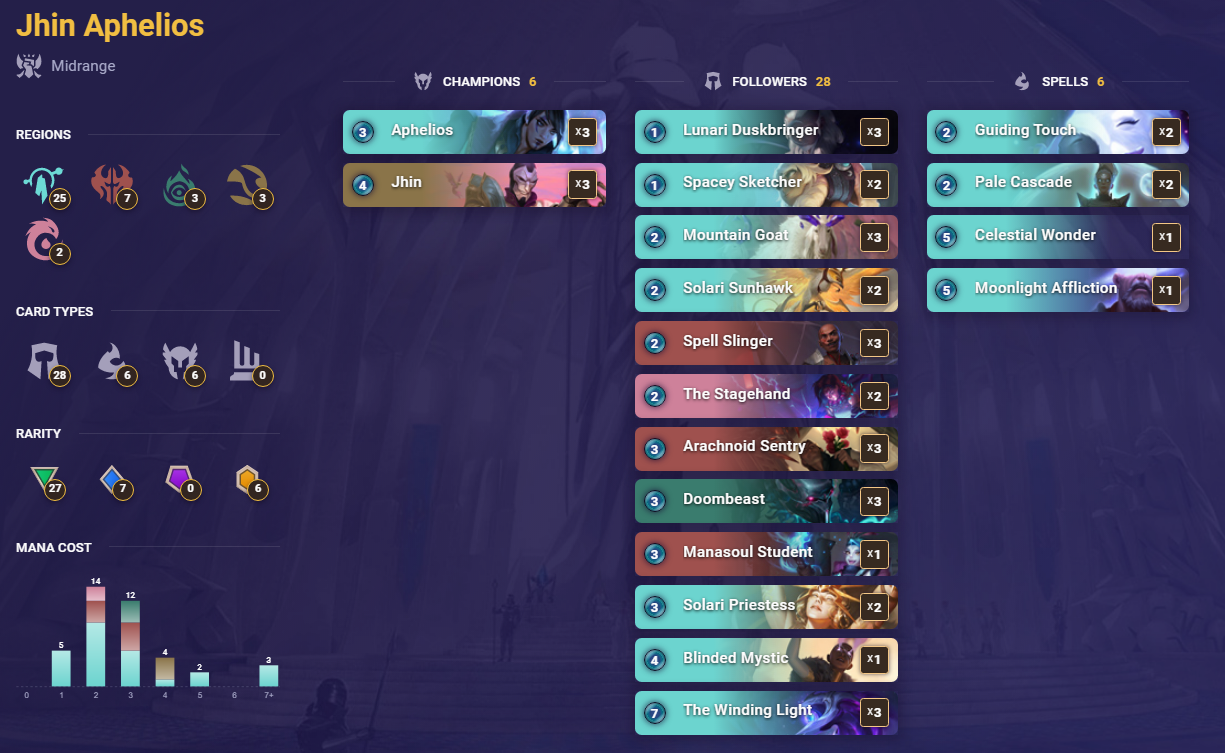 Jhin is the least flexible champion out of the four new we’ve gotten. Even though his Runerra Ability allows you to play cards from every single region in the game, he’s still locked into a couple of competitive archetypes (mainly aggro with Annie).

This deck was made by Aikado. It’s a midrange Jhin list that uses all the stuns in the game to slow down the opponent’s game plan and outvalue with Aphelios weapons until The Winding Light comes down on the board to finish the game.

Aphelios’ weapons count for Jhin’s level up which is another great synergy between these two champs.

This is one of the very few competitive Jhin lists that isn’t focused on Aggro or Burn. 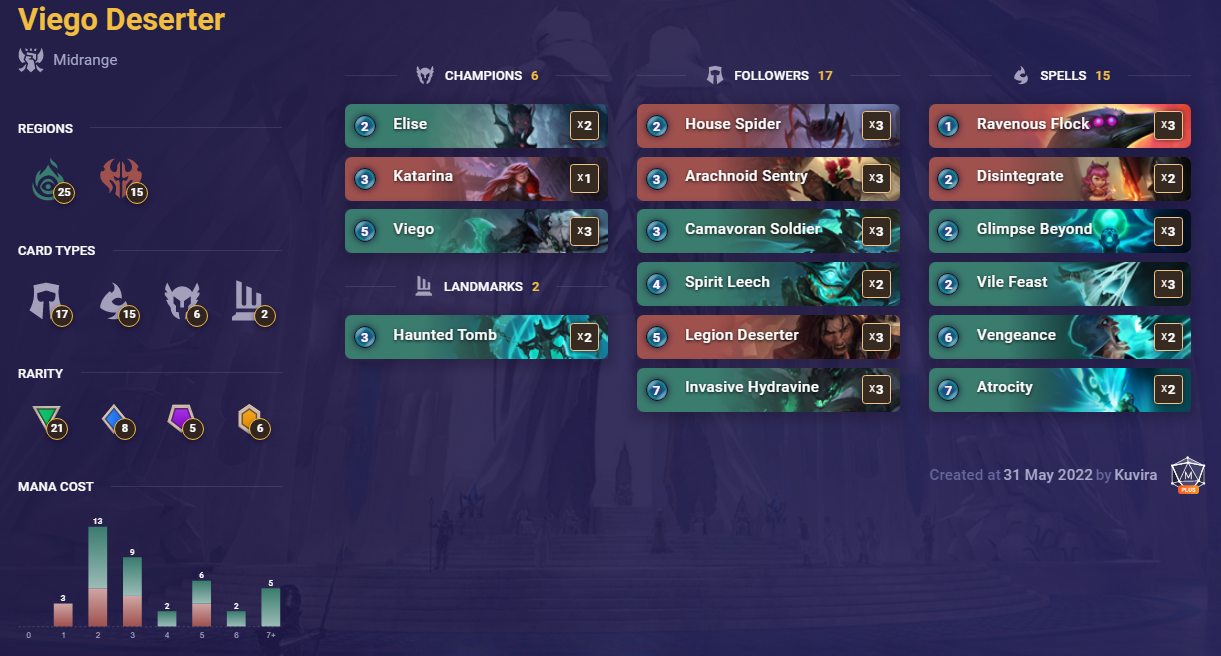 Last but not Least, Viego Katarina with Legion Deserter. This new archetype has taken over ladder during the last couple of days.

this is probably the highest winrate Katarina deck in the history of LoR.

This deck is strong because it does two specific things very well:

Haunted Tomb is a great way to revive one of these threats if the opponent was able to deal with them.

This deck has the potential to dominate the meta in the future but still needs to be refined for sure.