7 Empires of the Ascended Decks to Try During Launch Week

7 Empires of the Ascended Decks to Try During Launch Week

The bomb has dropped everyone, the Sun Disc has risen, the ascended have returned, and Shurima is officially here.

To celebrate the launch, we’ve got 7 decks recommended by our Glimpse Beyond crew.

For each deck, you’ll find descriptions written by Precipic and I along with their lists, deck codes, and more if you want to try them out.

The 7 Empires of the Ascended decks we’ll be covering are: 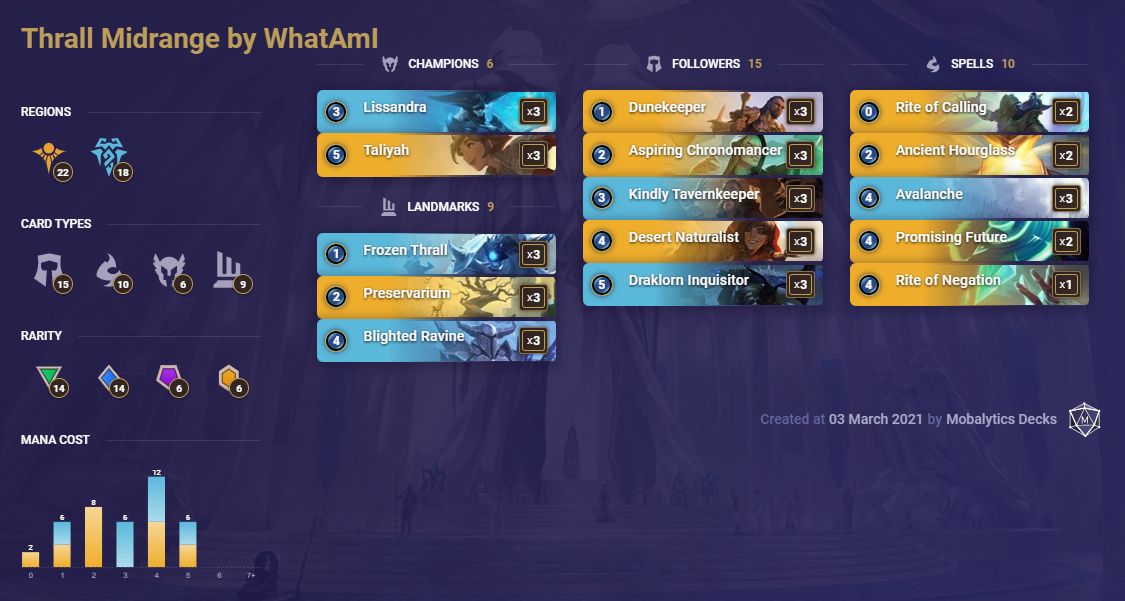 This interesting little brew is looking to combine the aggro-stopping power of the new landmark Blighted Ravine with some Feel The Rush-esque game enders popping out of Frozen Thrall.

We’re a sweet midrange deck that looks to sweep aside the swarms, potentially win Tempo back by eating a late Frozen Thrall from Lissandra with a Desert Naturalist, and can potentially one turn kill on turn seven.

Here’s the magical Christmas land breakdown for you.

While that won’t happen often the deck packs a metric-tun of value tools as a midrange engine deck and has good removal and life gain to stall out till the trolls come home to finish the job.

Definitely worthy of being tested. 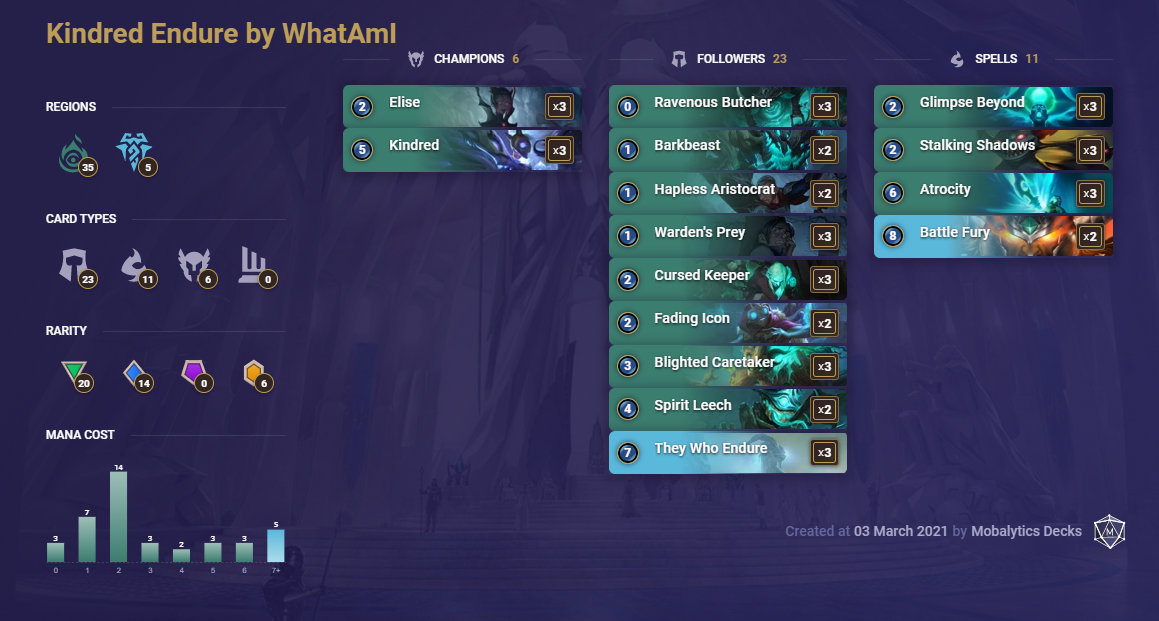 Hate it or love it Endure is an old powerhouse that is looking to take another swing at this meta.

We’ve got some crazy new tools from Fading Icon to Spirit Leech and that’s just the tip of the iceberg.

Not only is our crazy turn one to four that Endure is famous for now more consistent than ever, but also we’ve got the perfect bridge card between four and seven with Kindred.

Kindred turns up the pressure, is easy to proc on your own even if they can take the hits without blocking, and if they level can even be a secondary Atrocity target to end the game.

I’ve even put my own spicy tech in here. The beauty of the moment when you open attack on turn five with Battlefury mana and make a nine Power Spider that they couldn’t block hit them in the face is incomparable. 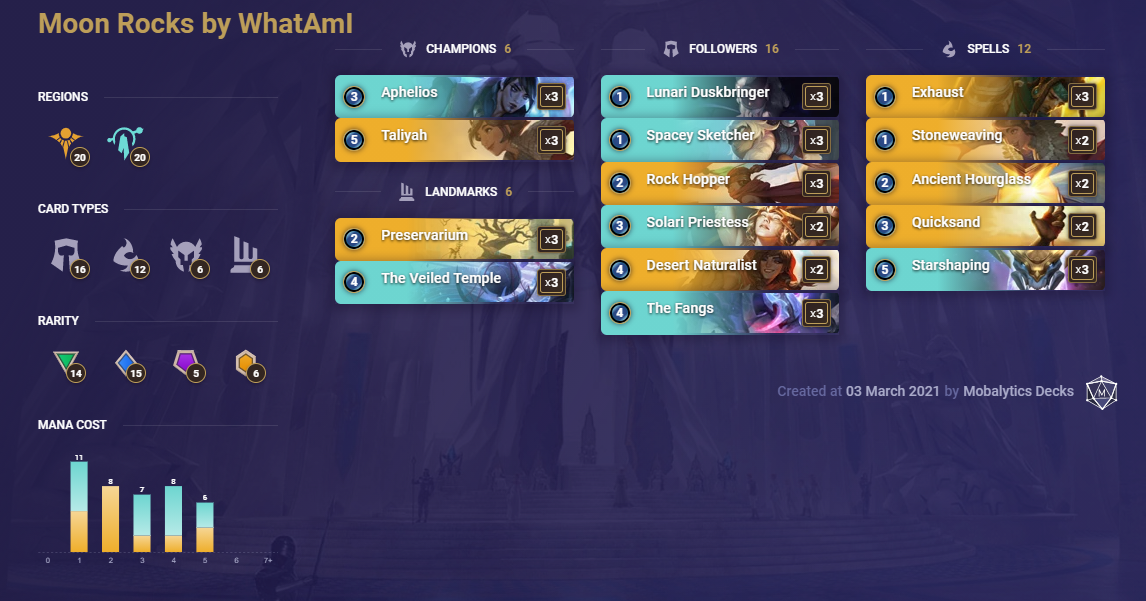 Aphelios might have gotten hit with the nerf bat, but it was really more of a love tap than anything that is going to knock him out.

This deck combines the crazy consistent power of Aphelios with the combo potential of Taliyah to devastating effect.

The big combo here is that Taliyah creates an exact copy of a landmark.

That means that if you use her to copy a Veiled Temple, the Temple she creates will be on 1|2 for the turn.

If you play any of your one mana Burst spells or an Aphelios gun you suddenly have four more mana to work with and a giant Taliyah.

Seems pretty fun to me.

We’ve still got the crazy heals and end game of Starshaping to prop us up and plenty of value Invokes to get there.

Where one Temple is good, two must be better right?

This seems like a sweet deck to rock out with for the day one meta. 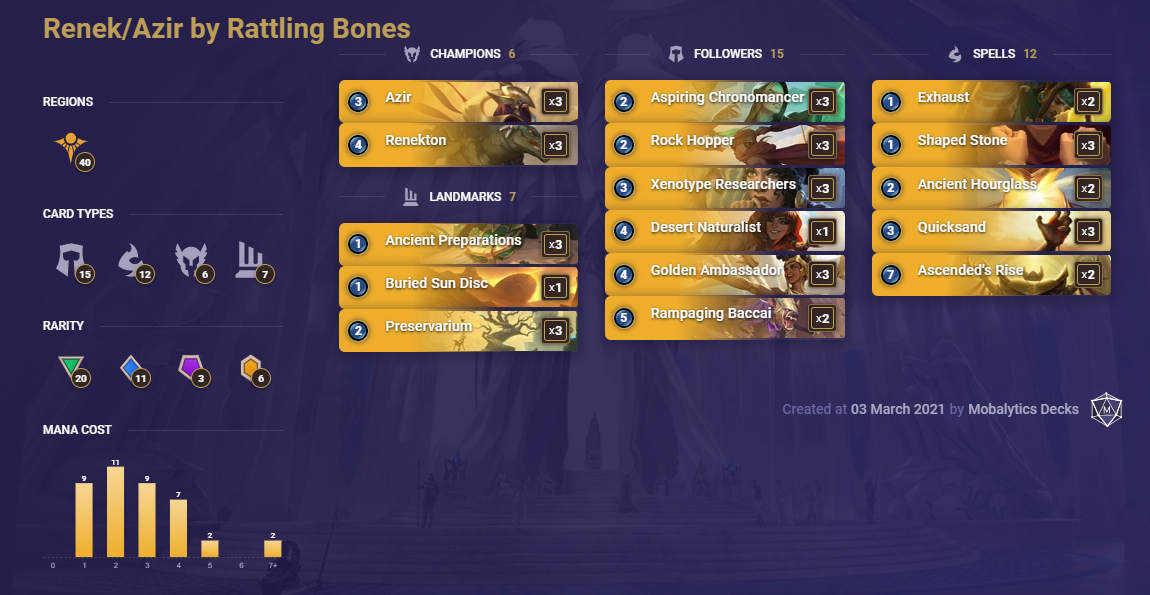 This is the Azir fully leveled deck.

Your goal with this deck is going to be to go Buried Sun Disc Azir turn 3.

Renekton turn 4 into Ascendent’s Rise turn 5 and get both of you champions to their level 3 mode on the 5th turn of the game.

Other than that we’re just a value Shurima midrange deck with all the highest value cards that we can run in the deck that we can.

Playing this deck it’s probably optimal mulliganing for a good curve with cheap cards like Ancient Preparations, Aspiring Chronomancer, and Rock Hopper, but honestly, I would just go for Renekton, Azir, and Ascendent’s Rise so you can get the turn 5 nut draw. 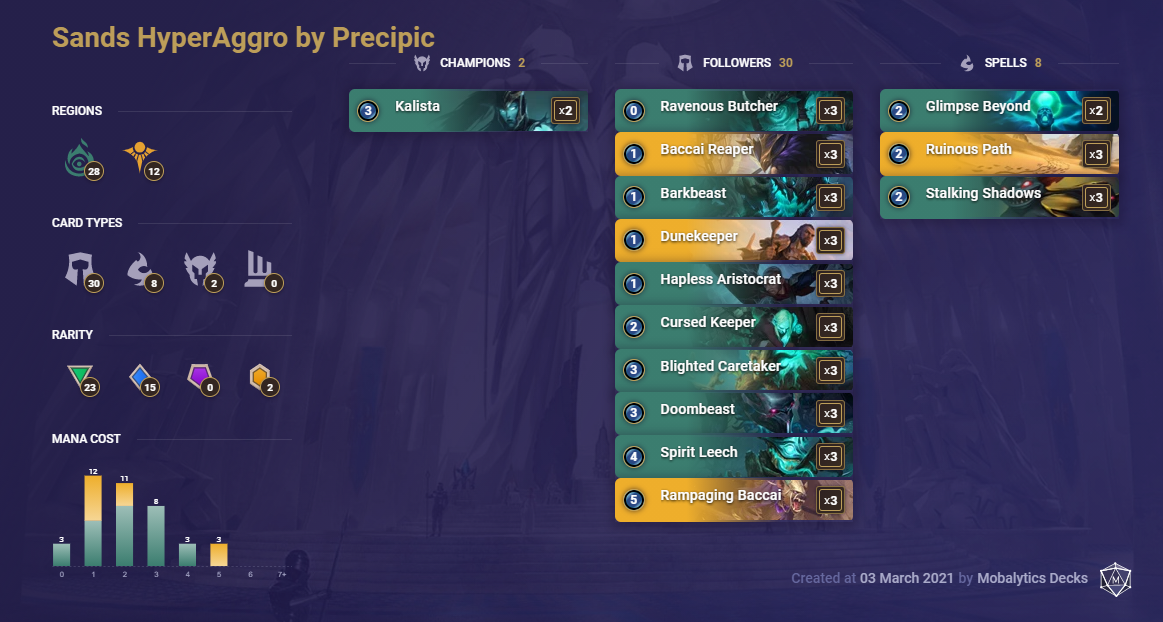 This list is a super-budget deck focused around incredibly explosive early turns that then finish out games by burning people out with Doombeast and Ruinous Path.

Early turns you should be looking for any of your early drops and ways to enable them quickly.

Dunekeeper is a genuinely insane card. It has the ability to push 4 damage on turn 1 if they don’t have a blocker and if they do it still will push 2 and trade for their blocker.

From there it’s just classic SI aggro with Ravenous Butcher, Cursed Keeper, Barkbeast, and Blighted Caretaker to take over the board for these early turns.

Baccai Reaper is another massive source of damage in these early turns as well.

Once you’ve gotten your early damage in just look to chain a pile of burn spells with Ruinous Path and Doombeast and maybe stabilize the board with Rampaging Baccai. 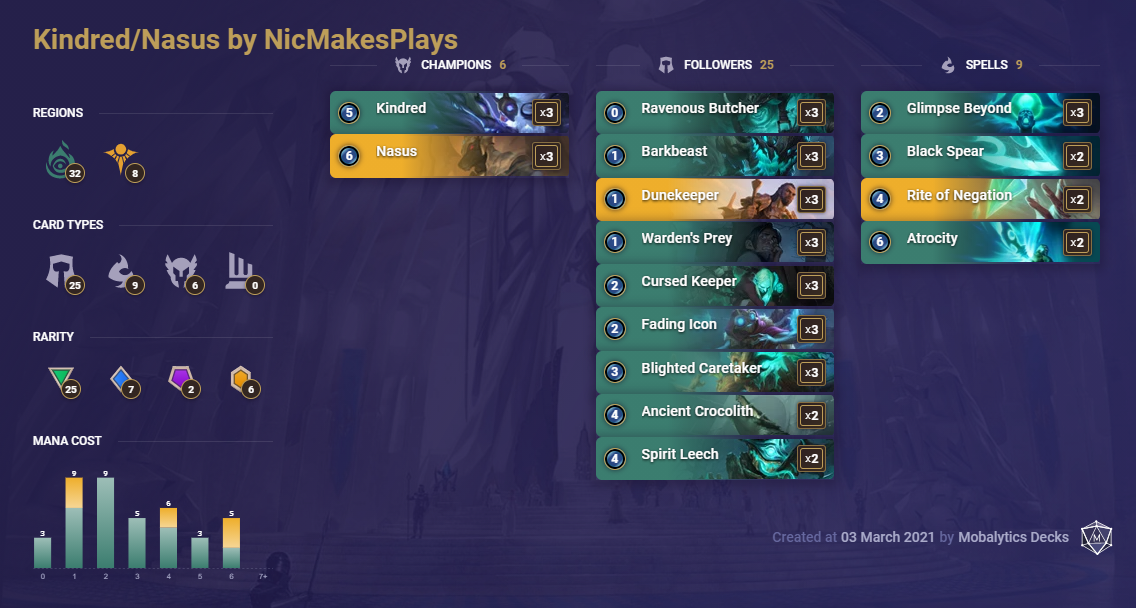 The plan with this deck is very similar to its old cousin Endure, but with a little bit of Shuriman Spice.

You’re still a crazy aggro deck that can get extremely early board pressure and kills, but now Kindred and Nasus are here to help out your top end.

Kindred will be a great tempo swing and Nasus will likely come down as at least a 7|7 and grow from there.

Look to end games in a decisive fashion with Atrocity, possibly even backed up by Rite of Negation.

One of Endure’s biggest problems was always that your lethal Atrocity could simply be Deny-ed.

Well, now you can Deny them right back.

Never underestimate the power of a timely piece of interaction to close a game. 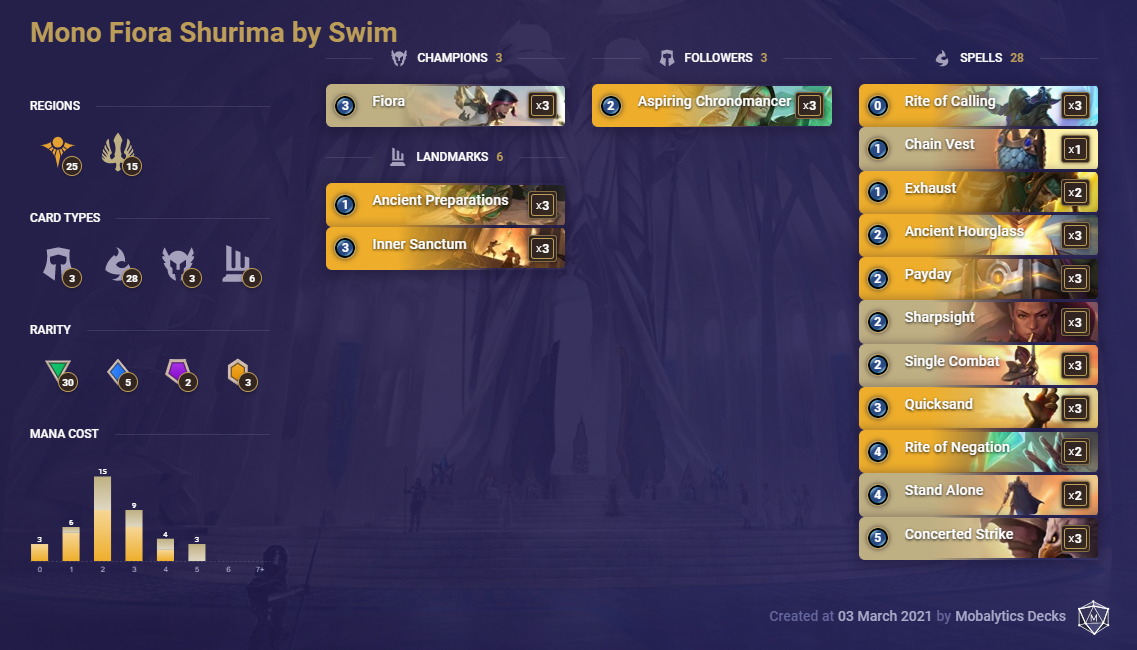 If you want to be a true degenerate then Fiora has you covered.

Anyone who has played the Mono-Fiora Frejlord version knows what’s up here.

Find your Fiora, play her, protect her, and let the queen carry you to victory.

This deck can do some truly unreasonable things with the Luck Find as well, getting Spell Shield, Tough, Scout, or even just +0|+2 for you Fiora is going to be a good time.

Sometimes your girl will be AWOL, but when she is online, look out for the absolute beatings she will hand out.

If you’re looking to pray on the Shadow Isles swarm deck on day one, this is the place to be.