We’ve made it all the way back around again and very soon, Runeterra seasonals will be taking center stage.

I’m Jordan “WhatAmI,” Abronson and I’m here to take a look into a smattering of the top decks we can expect to see throughout the Open Rounds of the tournament.

The prizes include a $20,000 pool, prismatic chests, a competitor card back, and a player icon. 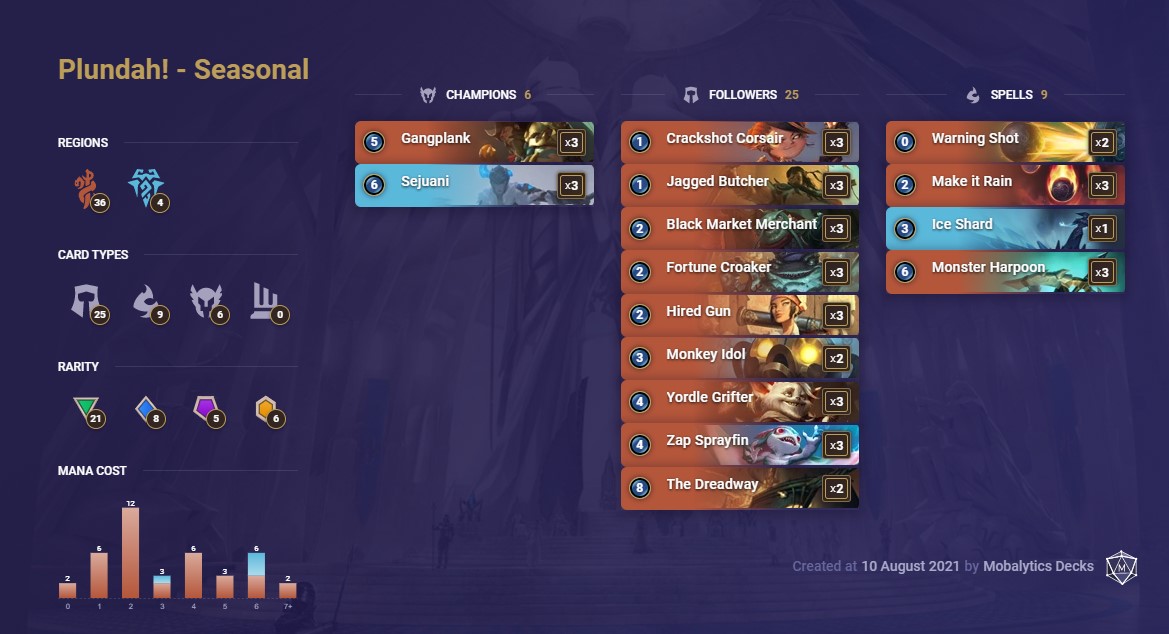 I wouldn’t be surprised if this deck is public enemy number one going into next weekend. It has a surprising amount of interaction while applying pressure and fighting for the board the whole way.

Then at the end, its leveled champions and even The Dreadway show up to provide huge finishers all on their lonesome.

If that wasn’t enough they have six cards to turn your own deck against you. Nothing hurts worse than playing a control deck and getting your own Harrowing or Deny dropped on your head at a key moment.

As far as weaknesses go this deck can have some problems defending itself early if it doesn’t draw its curve correctly.

It can also struggle a bit if its first two to three endgame threats are answered. Hyper aggro and hard removal control decks are good places to be against this particular pirate-ey problem. 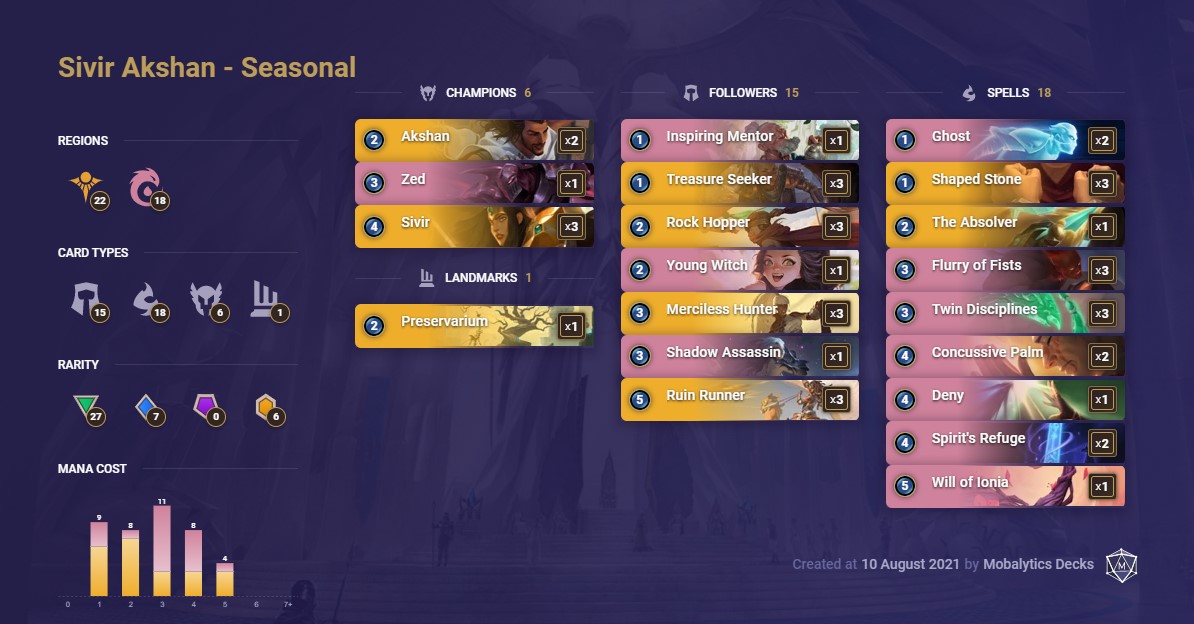 This one comes in many forms but the underlying concepts remain remarkably similar. Set up some powerful spell-shielded bodies, pump them up, and find some way to slam them through your opponent’s defenses for lethal.

Even if you can break the spell shields there are just so many pump spells that it can be hard to kill the key units with damage alone.

This deck is very all-in, but can also grab just that little bit of extra value it needs to push over the finish line from Akshan or Preservarium.

Don’t count them out just because they go low on cards early in the game.

This is another deck that swarmers like Pirate Aggro or Discard can do well into, though Spirit’s Refuge does give some significant counterplay.

Other than that you can jump to the far end of the spectrum with Anivia. Stripping the spellshields away almost instantaneously and freezing or killing anything that even thinks of getting buffed. 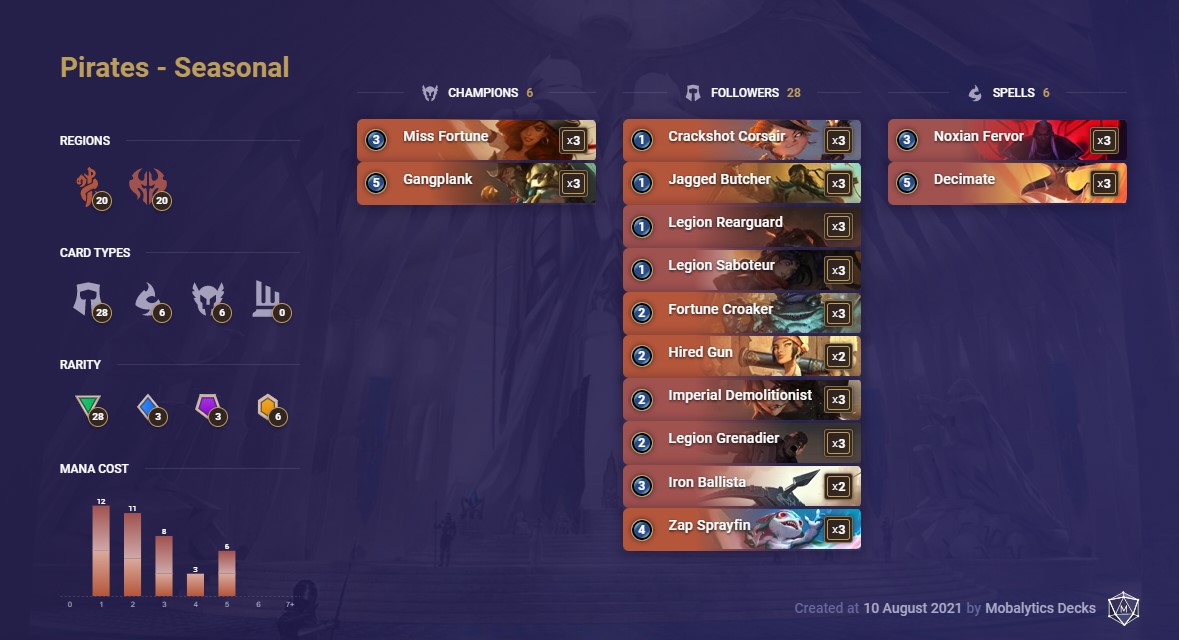 Speaking of Pirate Aggro sometimes it just time to kill a fool. I’ll admit I’ve never been much of a fan of Make It Rain in this deck, I’d rather just draw more of my burn spells and throw it all at my opponent’s face.

That said this deck actually looks pretty well-positioned against much of the expected meta.

Don’t be fooled by the fact that we’re mostly looking at followers here. The amount of reach this deck can represent is incredible.

I’ve seen burnouts from double digits occur more than once, and with twelve one drops you don’t need to ask for much more than that.

This deck struggles against contenders that come prepared with their Withering Wails and other such destruction cards backed by life gain.

If you’re looking to put the beat down on the pirates then come equipped with ways to trade down the board in the first span of turns and either gain a bunch of life or wrap things up quickly before they draw burn to end it. 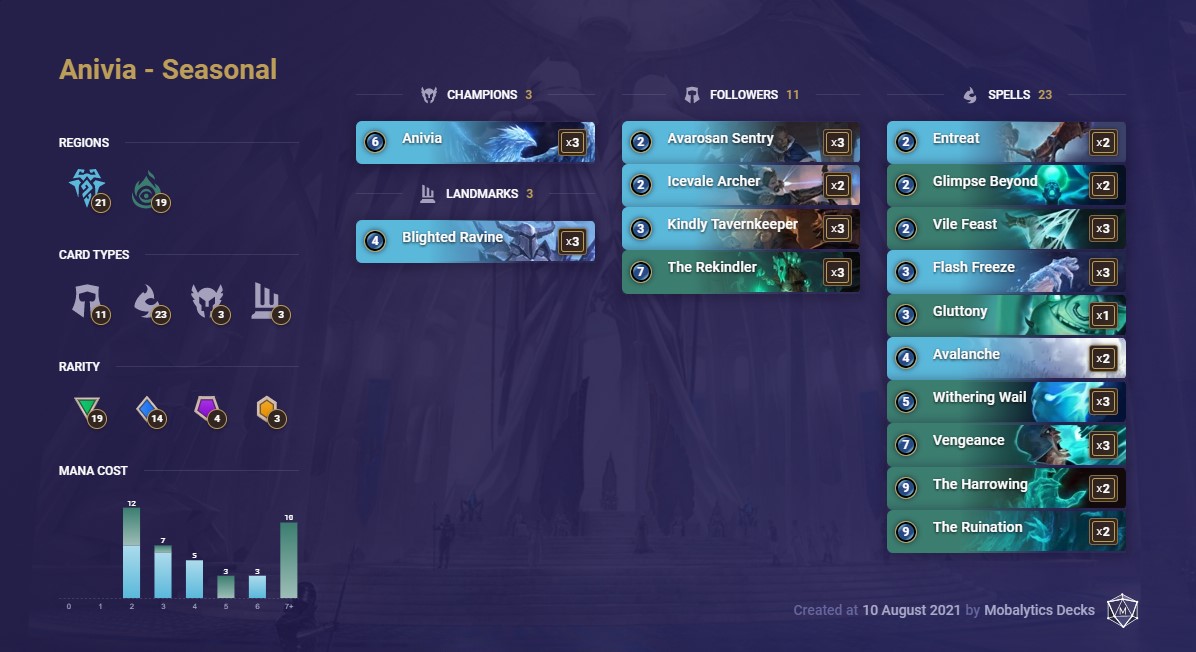 On the complete other end of the spectrum bird is most definitely the word. This might be one of the most frustrating decks to play against in this or any format.

Keeping any kind of board presence in the face of an absolute Avalanche of removal is a daunting task.

Even if you manage it then it simply gets frozen or chump blocked by an Anivia that wants to die so it can come back stronger and with more friends.

With healing to spare trying to get there on reach isn’t particularly likely to work out either. Yes, anyone who’s playing fair is going to have problems.

So the answer of course is to play as unfairly as possible.

Bring in that Karma/Ezreal combo deck and that Akshan infinite nonsense to punish the bird for taking fifteen turns to actually win the game.

Unbench the Kench and laugh at how all the damage only helps you.

Anivia does many things well, but playing into combo deck is not anywhere near the list. 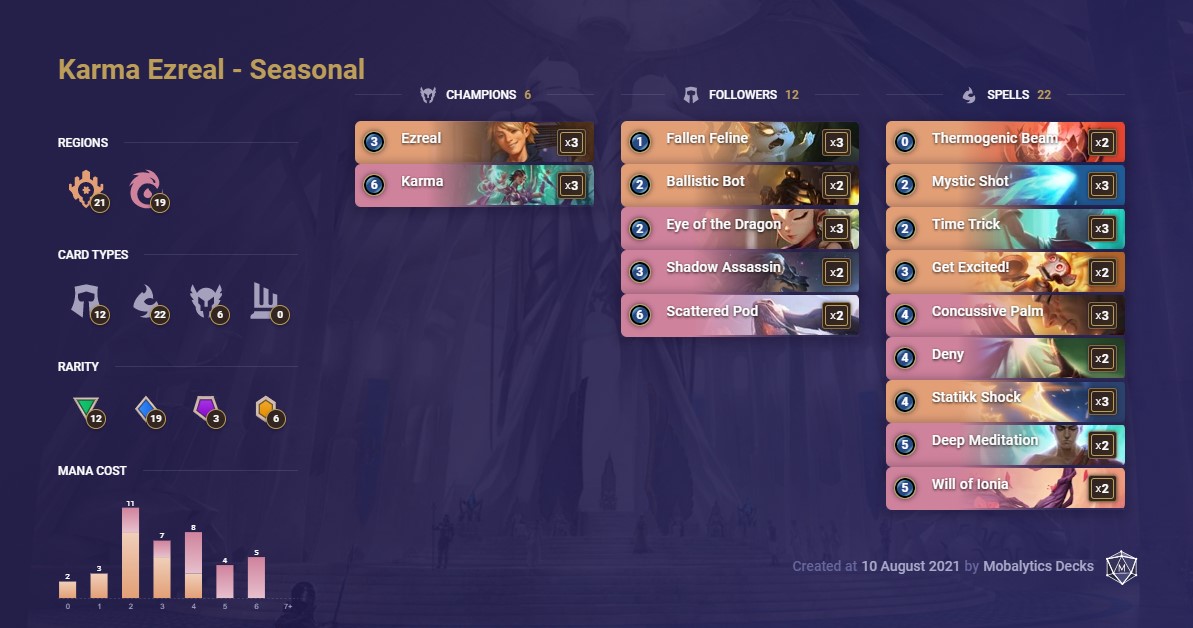 To represent the combo side of things, let’s welcome back the one we love to hate, the original twenty-zero combo control deck, Karma Ezreal.

Spend the first nine turns of the game trying desperately to stay alive and then draw ten cards and laugh at your opponent’s pitiful attempts to stop your combo engines.

This deck will look almost unbeatable powerful against anyone who tries to take a slow and steady approach.

The easier it is for them to pass the turn and match up their removal and delay spells with your creatures the happier they will be.

Unfortunately, the biggest downside I have found in playing with this deck is how often it can lose to itself.

If Karma and/or Ezreal are simply hiding in the bottom fifteen cards or you have to blow everything early to live, sometimes you just can’t finish the job.

As far as targeting them goes aggressive Demacian decks are often the way to get it done. Beefy units backed up by pump spells with Rally effects to spare cause this deck no end of trouble.

Plunder from the top of our list is also a good contender, simply not giving them any room to breathe. 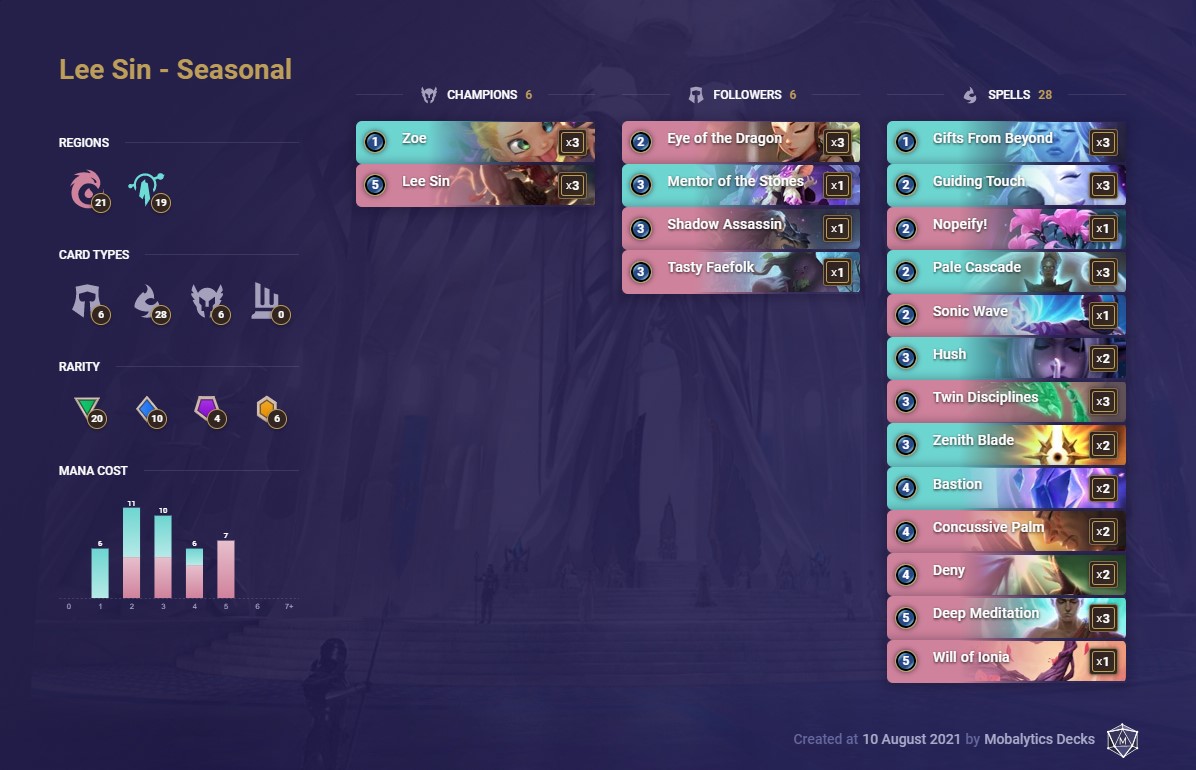 If you can’t answer Zoe fast she’ll kill you on her own just fine, if you can, then Lee Sin has that one turn kill on backup.

Even if you can stop their combo you’ll have to fight through a veritable army of dragonlings from an effective six copies of Eye of the Dragon to kill them before they simply draw through their deck and set up again.

Lee has been many a formats boogeyman and is not to be underestimated.

The best ways to take down this archetype tend to be with larger combo decks, i.e, Karma, or with repetitive freeze effects. Sejuani, as well as some of the more old-school midrange Freljord decks come to mind. 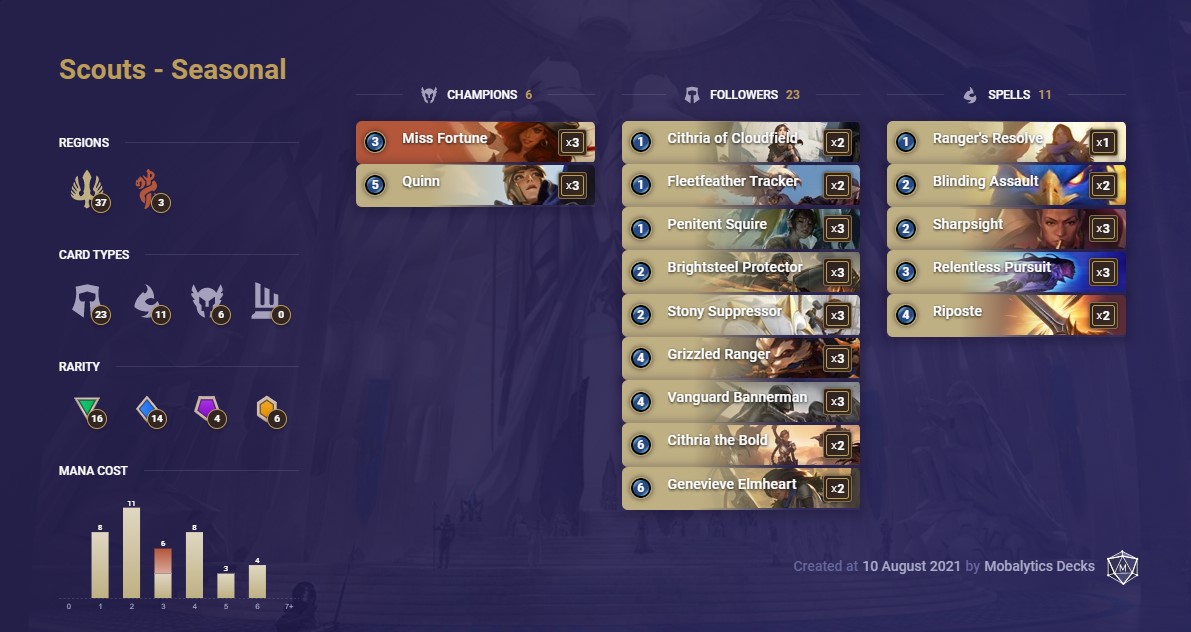 If everyone is doing too much over-the-top nonsense then sometimes you just have to go back to your roots and punch them in the face.

Don’t need burn or fancy tricks, just attack and attack, over and over again with large and swiftly leveling up friends.

This deck provides possibly the most pressure of any deck in the game between turns one and six. It backs that up with a few choice combat tricks and some hard-to-answer top end.

Combo decks have little to no chance and even unit-based midrange can find itself swiftly overwhelmed.

If you’re scared of these old specters coming out of the woodwork then the Ravenous Flock decks tend to be the place to be.

Whether it’s Twisted Fate/Swain, Draven Ezreal, or Gangplank/Twisted Fate removing their key threats and running them out of resources is the place to be.

I’ve only managed to cover here a fraction of the decks that’ll be on display next weekend. We’re in perhaps the widest meta we’ve ever had due to the huge balance-changes that got dropped and I absolutely love it.

What that also means though is that this is anyone’s game. Whatever your favorite deck is and whoever you’re rooting for we’ll see it all play out next weekend at the Runeterra Seasonals. Can’t wait to see you there.