6 New Domination Decks Worth Trying Out

6 New Decks To Try For Domination

Hey everyone Kuvi here, today I’m gonna show you 6 different new decks to try on ladder with the new champs and cards from the latest LoR expansion Domination.

Most of these decks are competitive enough to be used to climb to Diamond or Masters from any starting rank, but they’re also great if you’re just looking to have fun and try new cards.

Check out the rest of our reveal articles if you’d like to see our expert breakdowns for the cards. 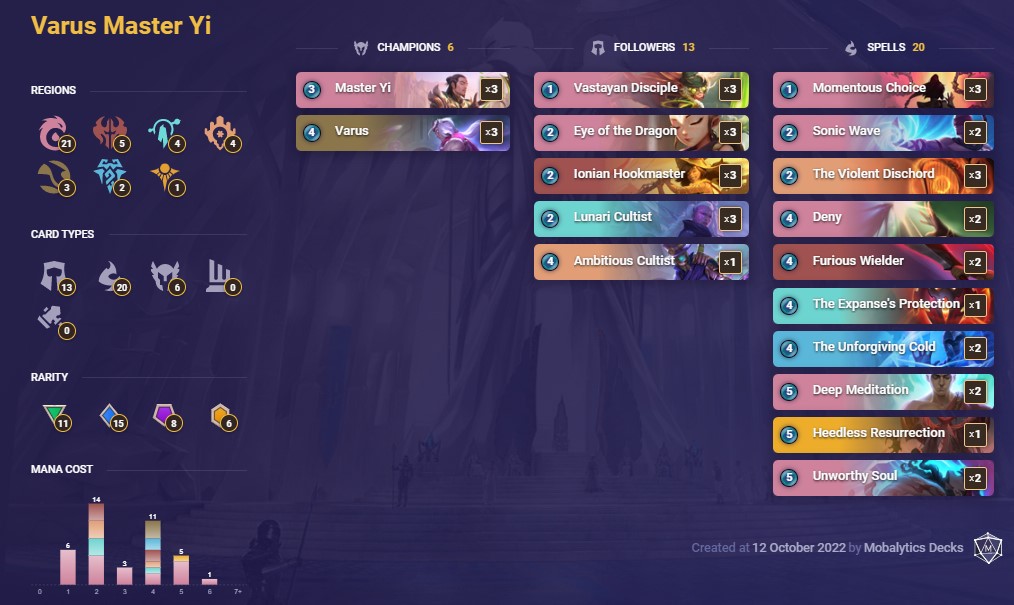 This first deck is a spell combo deck using copied Cultist spells to enable Flow, and quickly draw and level up Varus. This deck has a lot of interaction and defensive abilities that allow you to maintain control of the board state in the mid and late-game.

After you play Ionian Hookmaster or Varus, all of your Cultist spells will be activated, allowing you to easily activate Flow each turn and take over the game.

Vastayan Disciple and Deep Meditation are here for the consistent draw value and The Violent Dischord, Furious Wielder, The Unforgiving Cold, and Unworthy Soul are here to stop and slow down opposing threats. 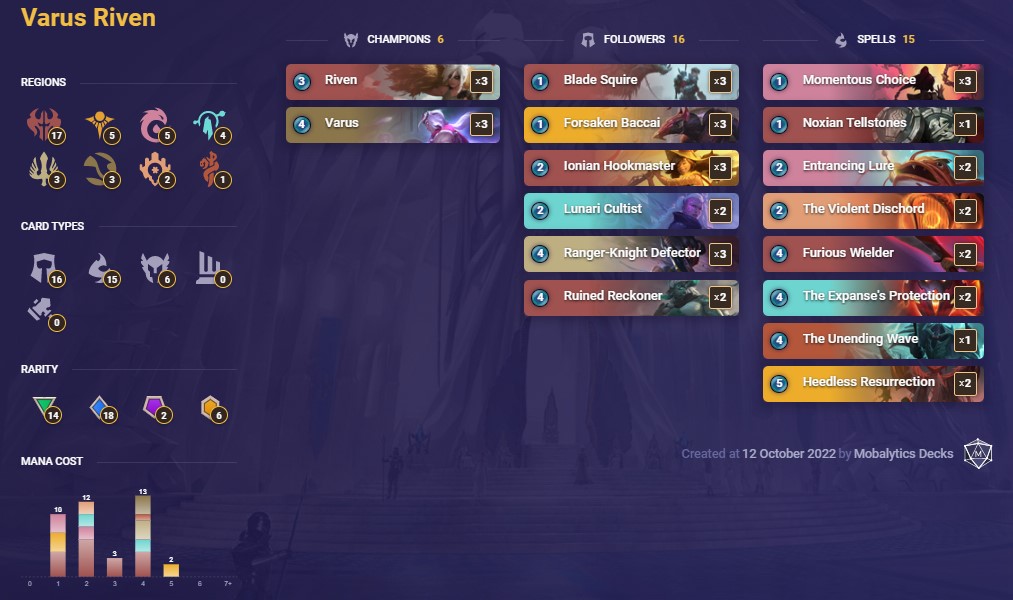 This deck is a more aggressive way to play Varus, taking advantage of Riven’s blade fragments to otk your opponent. As a more aggressive deck, there’s a higher focus on early units to push chip damage and make the finish easier later on.

Ionian Hookmaster and Varus enable our Cultist spells and followers this time as well. Rune Squire is a great new addition that helps us Reforge faster and gives us some much-needed interaction.

Varus provides Riven with a lot of efficient protection that Noxus lacks, including Momentous Choice, The Expanse’s Protection, and Heedless Ressurection, helping us push through and end games.

This deck requires a good understanding of timing and knowing when to go all-in for the win, usually off the back of a Ruined Reckoner combo with multiple attacks. 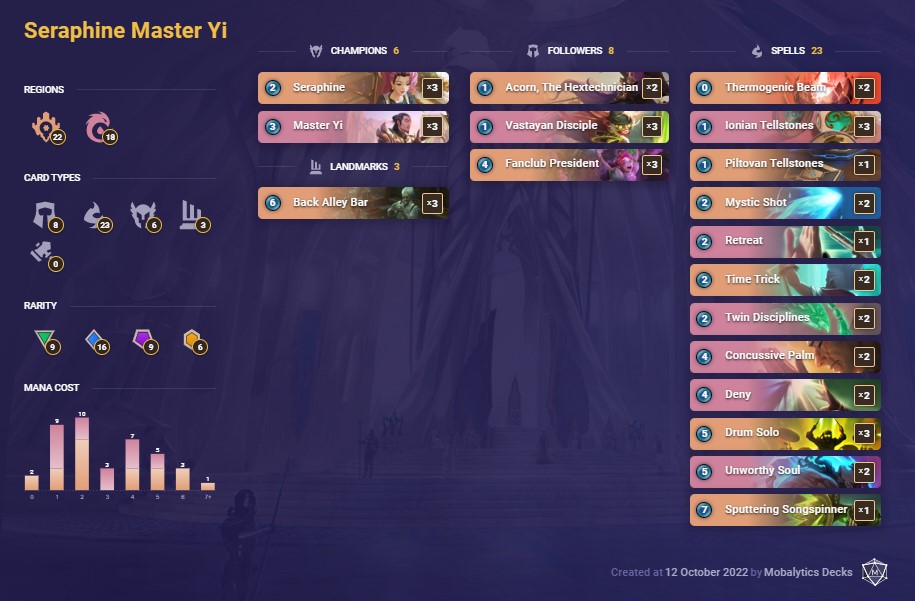 Seraphine with Master Yi seems to be one of Riot’s new prebuilt deck archetypes, both synergizing with and using Flow to out-tempo and out-value their opponents in the later stages of the game.

Spell ratios are important here to best take advantage of Seraphine and Back Alley Bar’s “new” text, which is a card you have not played yet in a game.

Spells that also generate other spells, such as Retreat, Ionian Tellstones, and Sputtering Songspinner are also great at synergizing with these, as well as enabling Flow easily.

A key to taking complete advantage of Seraphine is to discount the cost of your spells so she can copy more expensive, stronger spells, with her level up, which we can do using Acorn, the Hextechnician, Fanclub President, Master Yi, Drum Solo, and Back Alley Bar.

Because this deck doesn’t have a distinctly clear win condition, it might be a bit more challenging to play than this next deck. 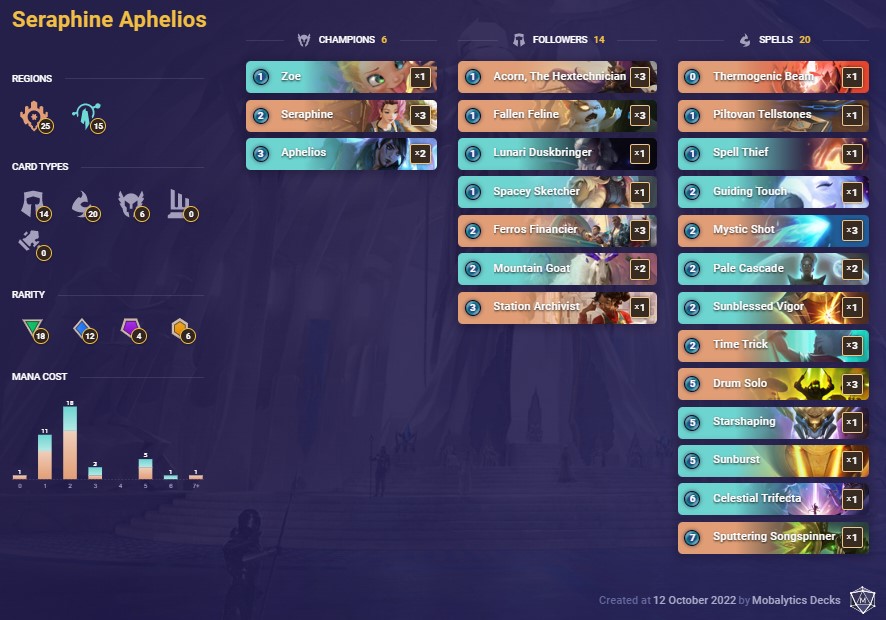 Seraphine is a big fan of great cheap spells, and when you think of regions with great cheap spells, few come to mind sooner than Targon. Between Guiding Touch, Pale Cascade, Gems, Moon Weapons, and Celestials, Targon offers Seraphine almost everything she wants and more.

Seraphine’s new Flow package and Targon both excel at outvaluing and outgrinding their opponent, playing tons of cards each turn, and being incredibly flexible.

On top of this, Targon gives her a proper win condition with the use of Celestials, some might say it’s a match made in the stars, pun intended.

Like many Targon PnZ decks before it, this deck aims to play in a very flexible way, from tempo beatdown to board control to value, you’ll have to put your thinking cap on while playing this deck. 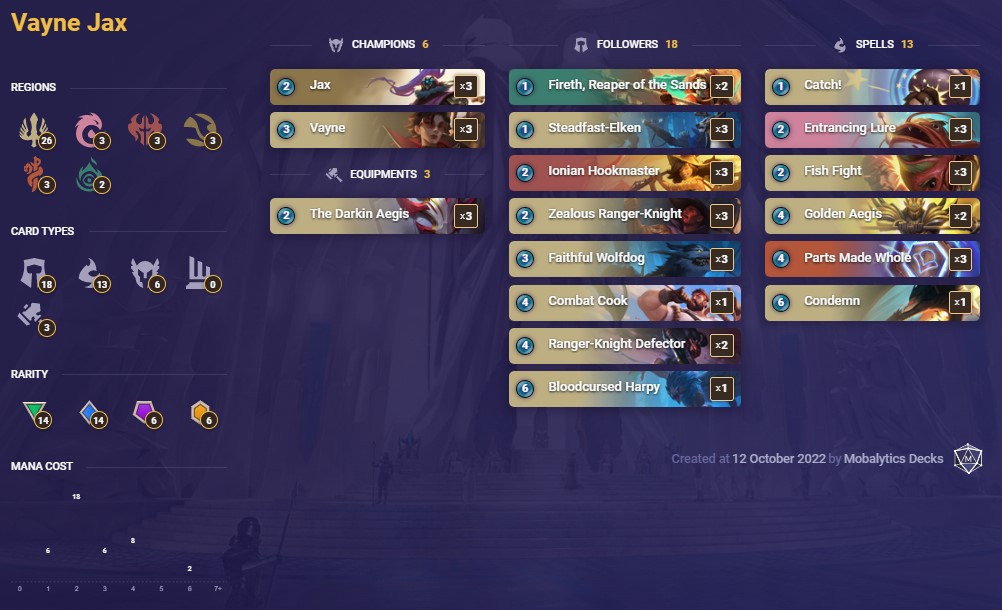 Vayne and her followers love an abundance of equipment stacked up in your hand and what better way to do that than with weapon masters. Improvising the perfect weapon for Vayne to tumble into combat with is a great way to quickly level up both Vayne and Jax at the same time.

We’re also taking advantage of the new Demacian Darkin equipment, Joraal, which should also be great against many of the new Seraphine and Varus spell-based decks.

Importantly Jax gives Vayne and Demacia some much-needed value through card draw with Entrancing Lure and Parts Made Whole. This deck should be able to build up some truly terrifying boards and put lots of pressure on the opponent in the midgame. 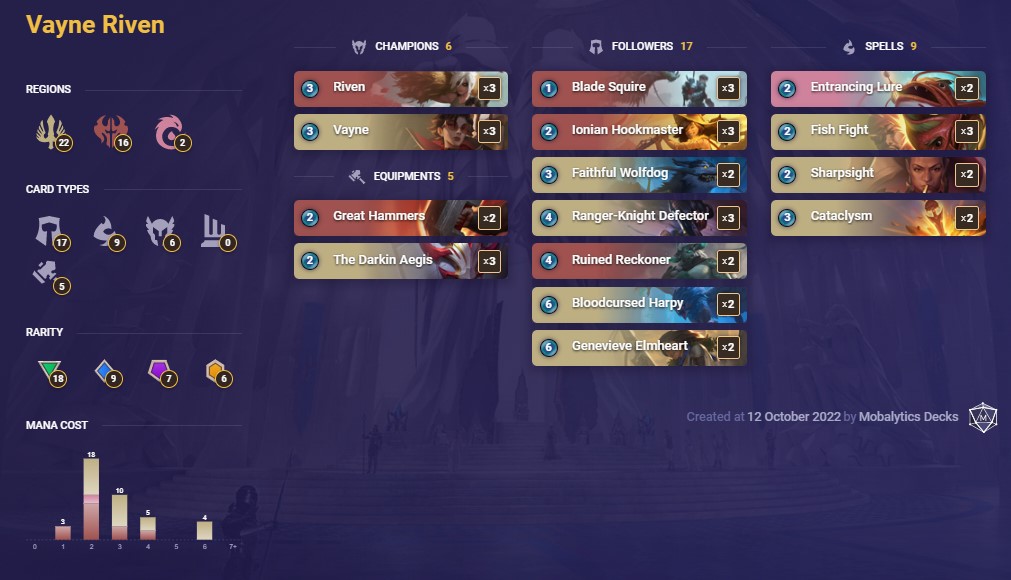 Riven in Demacia with scouts has been tried many times before, but I don’t think it’s ever quite looked as good as this. Vayne enables Riven to get more value out of blade fragments and generate more fragments with multiple attacks per turn.

Noxus also gives Vayne access to Ionian Hookmaster and Great Hammers as equipment options for her and her followers, which works even better the more attacks you have.

Between Tumble, Ruined Reckoner, Cataclysm, and Scouts like Ranger-Knight Defector and Bloodcursed Harpy, we have no shortage of incessant attacks every turn, always keeping our opponent on the backfoot.