6 LoR Awakening Decks You Should Try

6 New Decks From Awakening Worth Trying

The Darkin Saga is making its premier debut and I’ve got to admit that conversely, it’s making me feel quite a bit lighter about this new metagame.

I’m Jordan “WhatAmI” Abronson and I’m here with your launch week deck drop for what to play as the new expansion goes live. 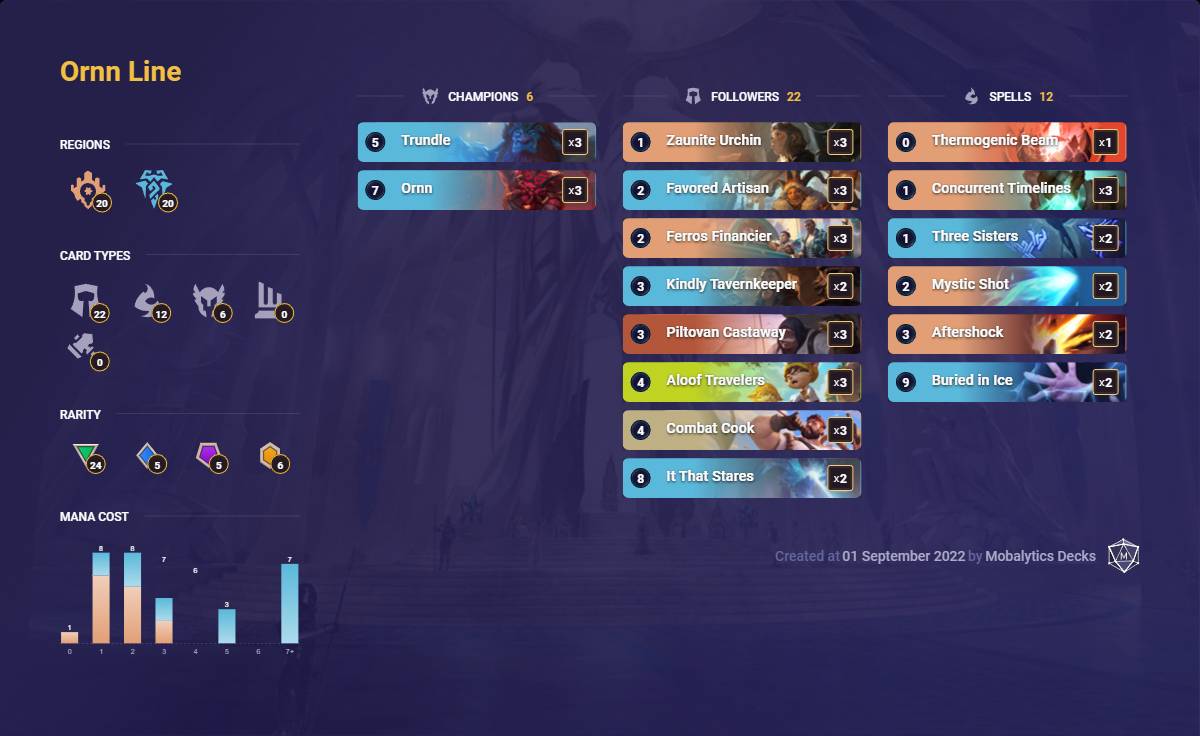 The combination of Trundle and Concurrent Timelines has been hovering around the fringes of tier one for quite a while now. It will occasionally break into the competitive meta for a tournament or a week or two of ladder before fading back into the aether that spawned it.

One of its defining issues though has always been that it rather lacked a second champion. Sure, there were plenty of randomly solid Piltover and Zaun midrange champs you could jam in, but none of them really seemed to fit with the theme of the deck.

Enter Ornn, another extremely solidly built finisher whose backup followers synergize incredibly well with timelines. Improvise is a lovely new mechanic that will go incredibly well in this deck, giving it that extra push to close games it often seemed to need.

We already had the powerful hard hitting midrange shell. We had just a touch of unfairness with either the free eight mana unit that Trundle could give us, or the Buried in Ice plus It That Stares one-sided board sweep. But it never quite felt like it was on the same level as other tier-one decks.

Now we’ve got a seven mana unit that will absolutely demand an answer as it hits the field. And when it is answered will turn any random stat-stick into a new threat. Not to mention the high roll possibility of giving our Trundle Scout. Need I say more? 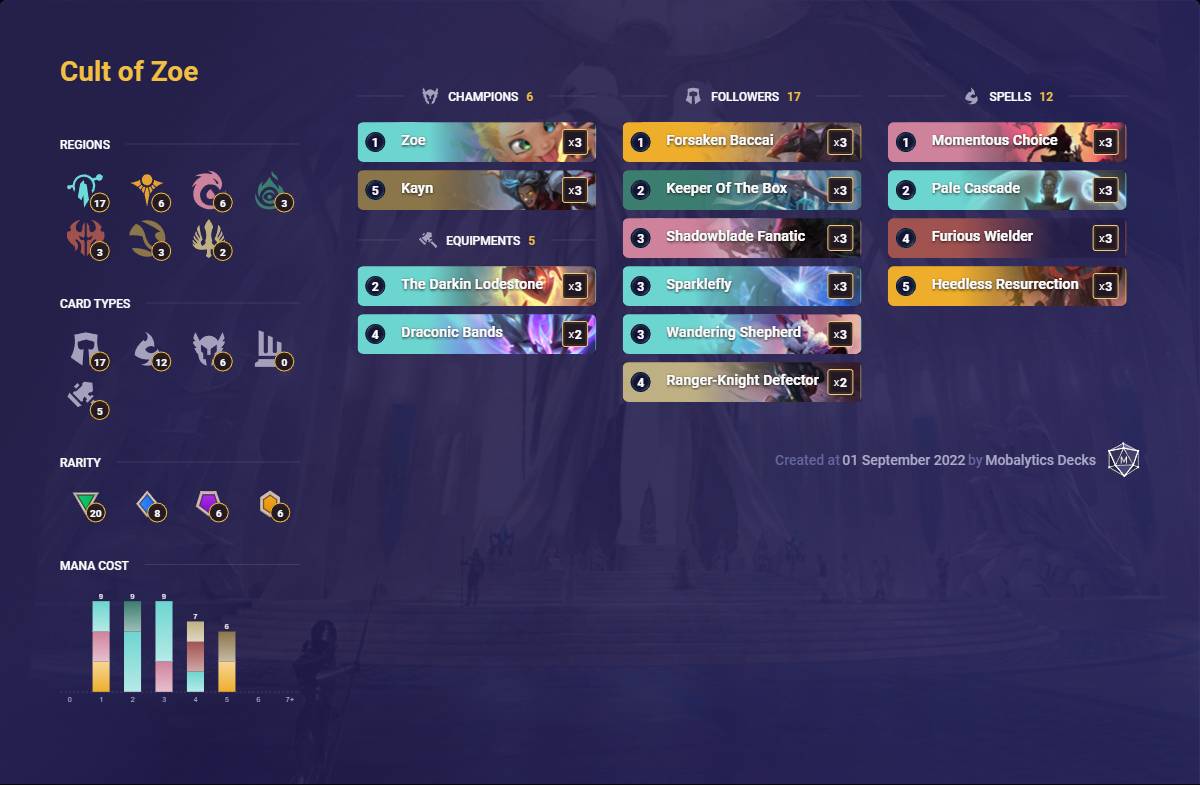 It’s been proven time and time again that reliable stat buffs and protection for elusive power house units are a great way to win games. Zoe and Sparklefly will be the standout targets in this deck. They’re ready to carry any of our myriad of boosters to a swift victory.

That said, the reason I think this deck has potential to be so powerful Is how multi-dimensional it is. Kayn will jump straight into your hand in the mid-game to create another must answer threat for your opponent. Once he flips, he’ll be almost impossible to race down.

Then, in case that’s not enough, Heedless Resurrection is here to make sure that even if Kayn can be answered, staying dead is not in his day planner. But even that isn’t my favorite thing about this deck.

No, above all else I am a lover of versatility. The Darkin Lodestone is my call to be the most powerful card from this new expansion. Providing huge threat when on board with a Zoe or a Sparklefly, late in the game it will simply morph into a giant spell shielded beat-stick to end with. What more can you ask of something that costs a mere two spell mana? 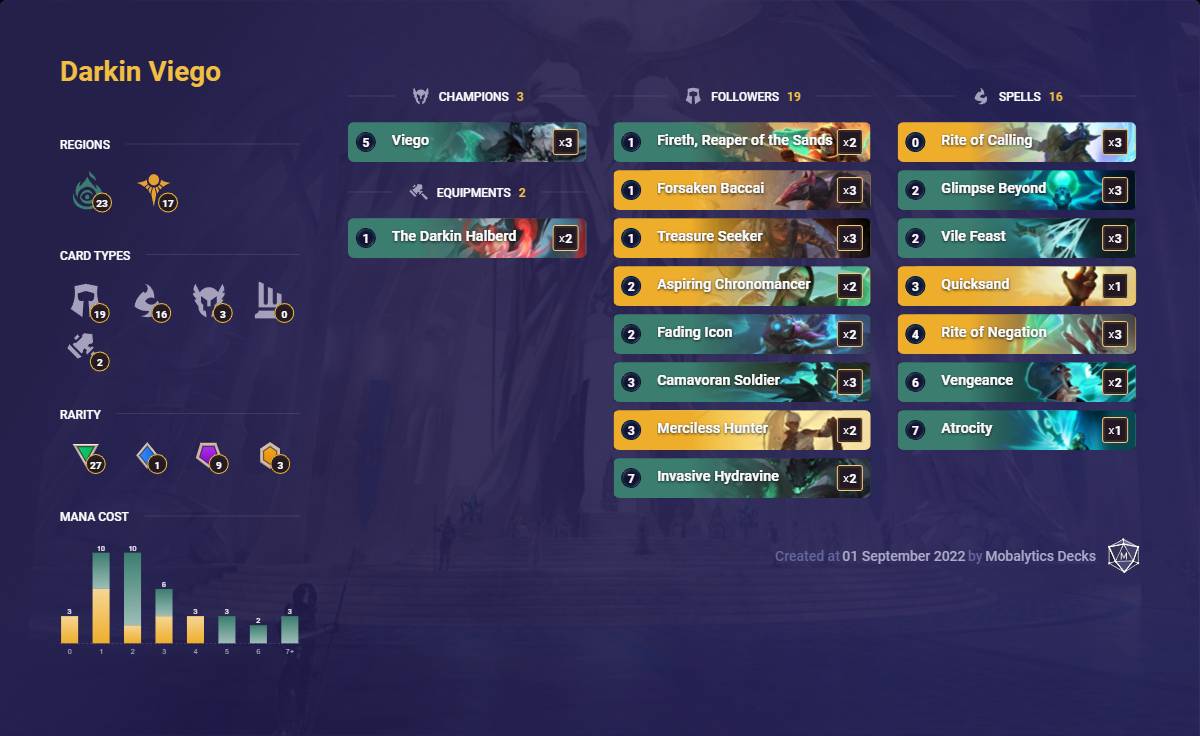 This deck was already quite powerful and has a few spicy new tools that are going to turbocharge it even more. Forsaken Baccai will add another layer of consistency and solid early game to a deck that was already on solid footing in both of those areas.

Fireth, Reaper of the Sands should be a solid inclusion no matter what state of the game you are in. She provides an easy Viego trigger, a potentially dangerous threat with her Improvise mechanic, and something small to sacrifice to a random Rite of Calling or Glimpse Beyond if that’s what you need.

Last but definitely not least is The Darkin Halberd. A backup late game win condition attached to a solid way to take control of the board and level our Viego? Sign me up for two.

Two new champions that go together quite well are Ornn and Jax. I have an inkling that they might end up getting better homes outside each other’s company, but I would be remiss if I didn’t at least attempt to pair them together along the way.

This deck will generate an obscene amount of value for low mana points while flooding the board with stats and working towards its mid game win conditions. Either of your champions leveling can close a game quite quickly, and even if they’re missing a large forged weapon gets it done.

The thing that makes this deck scary though is that it can do all that while having enough combat trick power to rival old school Fiora/Shen decks. If anyone remembers the absolute nightmare it was to try to face those foes in combat, you’ll understand some of what Jax/Ornn brings to the table.

Sharesies and Troll chant will make any attack scary enough, throwing equipment around everywhere and turning almost any trade favorable. But the real issue is that if there’s even one mana lying around, we’ve still got five ways to mess with our opponent.

Last but not least we have six ways to drop in burst speed units. Imagine if our opponent tries to remove one of our threats. We shrug, play Blades of the Fallen, then Parts Made Whole on our action, and attack. Control players beware I tell you. 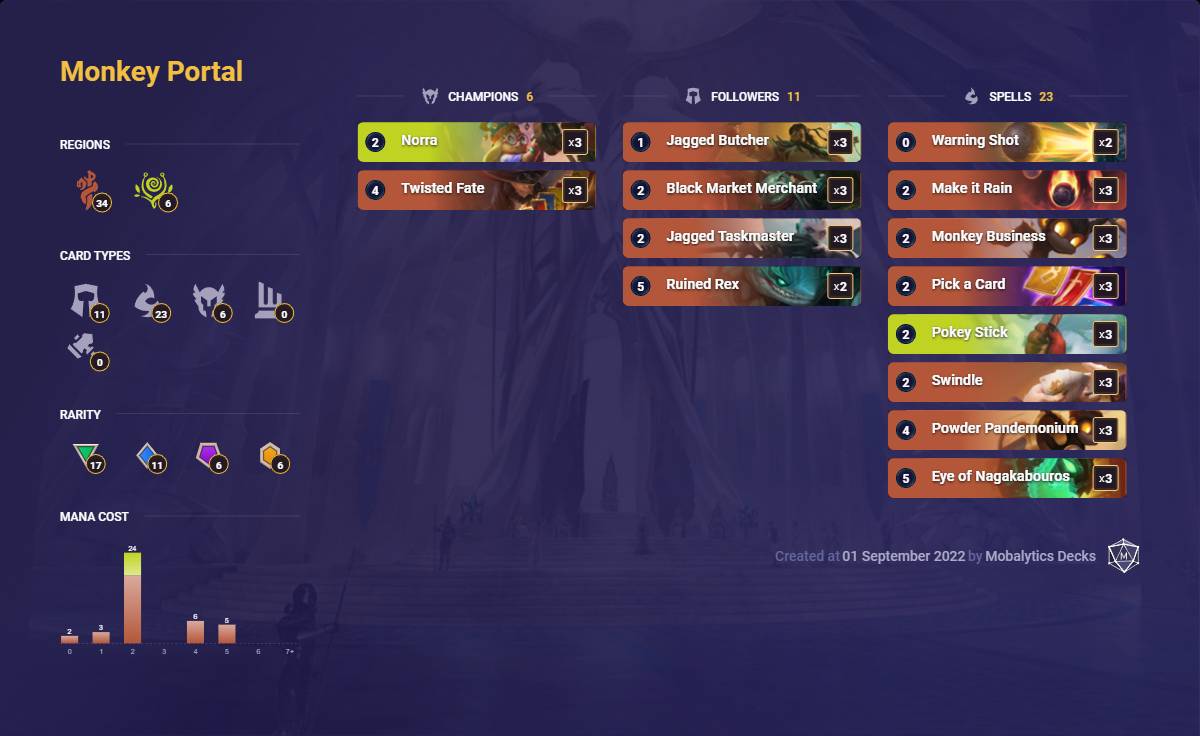 So, I asked myself the question, “Self, how do I level Norra Quickly?” And I answered, well, spam Powder Monkeys of course. The best part here is that the champion this deck already definitely wanted loves to draw cards, and that’s the other thing a Norra deck is really going to need.

If Norra is helpfully setting up portals for us (And getting those pings in to trigger plunder at the same time of course) then we’ll need a way to reliably get them into play. Pick a Card and Eye of Nagakabouros are the perfect pair to assist in that plan.

The other bonus is that this deck’s big weakness has always been the part of the game where it rather runs out of steam and hasn’t found quite enough pandemonium to close things out. Having quite a reasonable chance to level either of our champions and let them carry us over the finish line gives a solid backup plan this archetype needed. 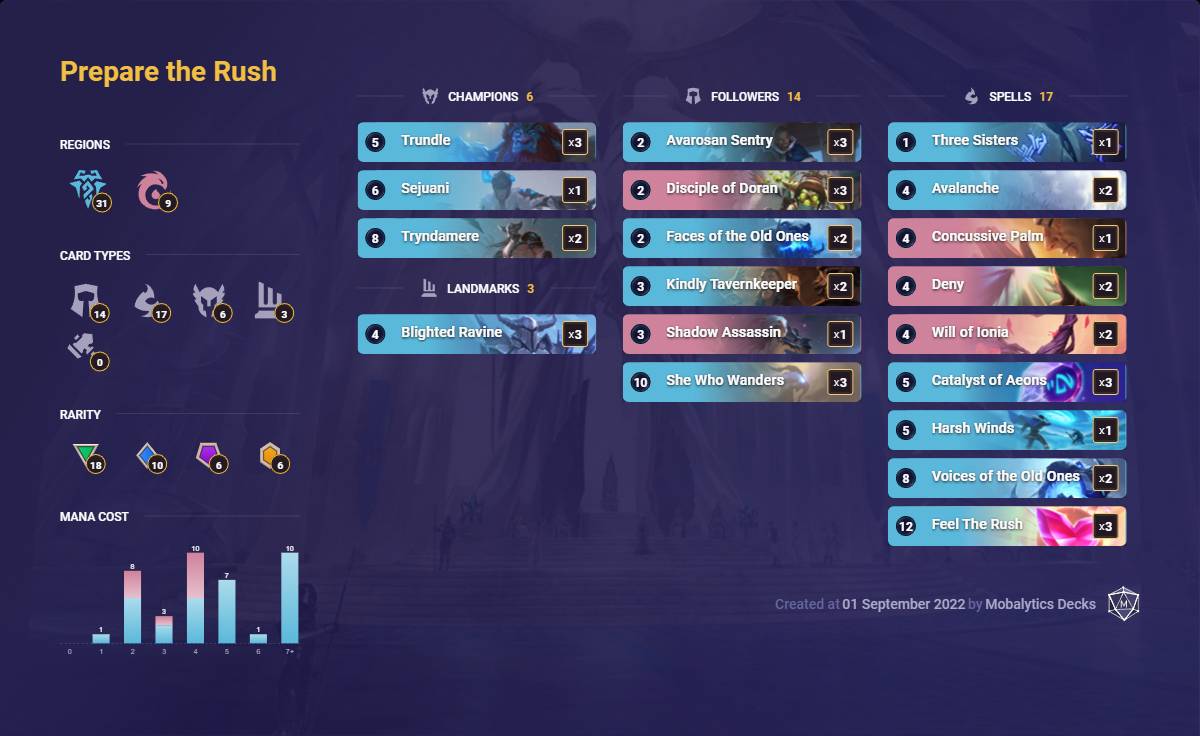 I’m not all that sold on Master Yi himself, but the support package that came with him has some gems for sure. Chief among them I think is Disciple of Doran. I absolutely love this card design and will be looking for whatever way I can to make it powerful, starting with this deck.

Disciple of Doran heavily rewards thinking out the game as many turns in advance as possible. The preparation effectively lets you bank an additional spell mana for future use, while also dropping down a sturdy early game body to protect against the aggression you’re sure to need to deal with.

Ionia FTR has always had a bit of a shaky early game, and I think this is just the addition to stabilize it. I don’t want to sound the alarm just yet but I would not be surprised if this deck turns out to be one of the premier control decks of the new format that is shaping up.