My last design article was about one of my favorite regions, Frejlord.

This time around, I’ll be covering 5 changes from the best pink region, Ionia.

Let me know what you think of my proposed changes in the comments below or submit your own! 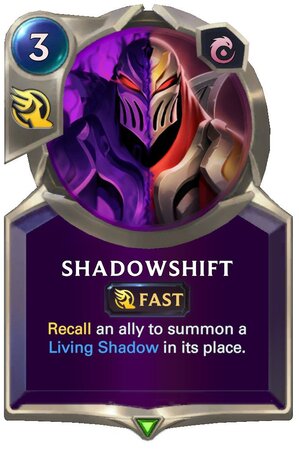 This change is one of my favorite changes I’ve ever made. In my last Noxus design article, I talk about my philosophy with champion spells, to sum it up, the perfect champion spells need to synergize with the champion, help it level up, and be playable in decks without the champion.

Zed’s current champion spell doesn’t do any of the three things I mentioned, it doesn’t help him level up, it doesn’t truly synergize with him and it was never ever main decked in a competitive deck or even in meme decks since it doesn’t create any unique combo. 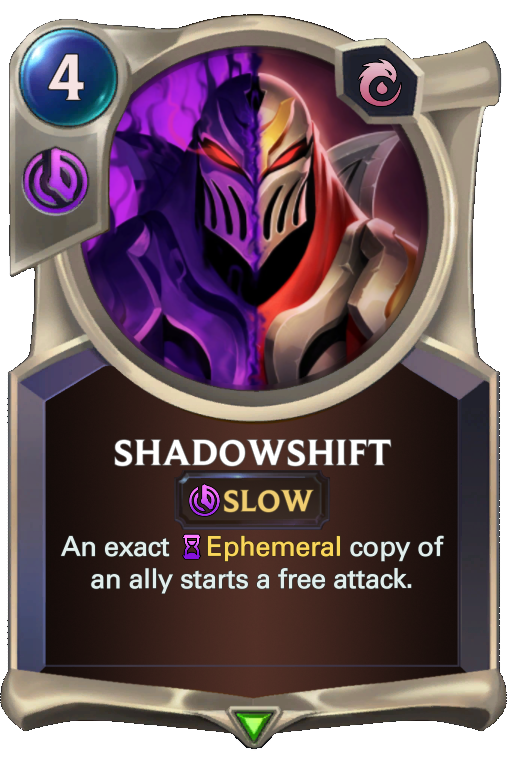 The version of Shadowshift I came up with does multiple things: 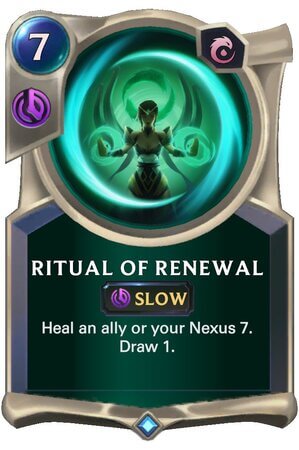 This is another Ionia spell that has been in the game since the foundation set. Ritual of Renewal never saw play in any competitive deck, it never even made it in any popular tier 3 or meme decks in the past.

It’s a 7 mana Slow speed spell that heals an ally or the nexus 7 and draws 1. This card has many problems; its cost is too high, 7 mana to fully heal an ally or heal the nexus is way too expensive even with the draw 1 effect. Healing is a reactive mechanic, having it attached to a Slow speed spell often feels underwhelming and counterproductive when the effect isn’t extremely good.

Ritual of Renewal is designed to work with Karma. With her level 2’s effect, Ritual of Renewal is doubled which makes it heal 14 and draw 2. When combined with Karm, healing the nexus to full and drawing 2 is a great way to come back into the game, but even in this perfect case scenario, the payoff isn’t enough.

For this card, I wanted to mainly focus on its synergy with Karma while also making the effect interesting enough to warrant experimentation in other archetypes. 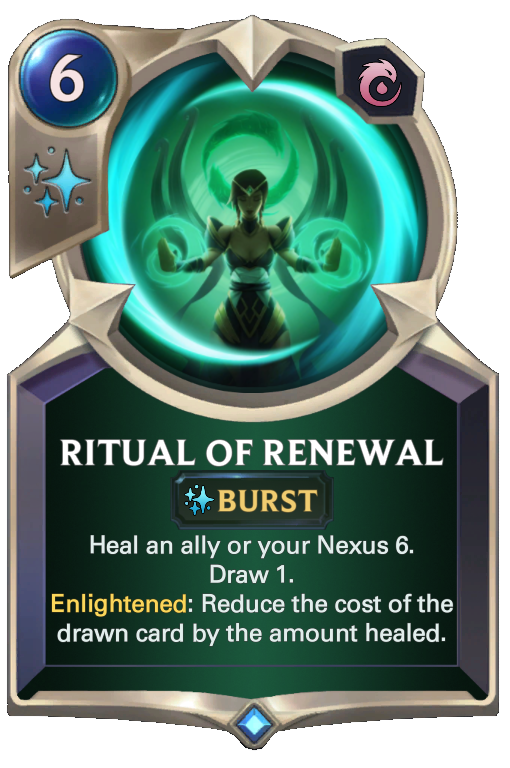 I decided to keep the flavor of healing and drawing cards while adding an additional effect that would be interesting in Karma decks or any archetype that wants to play for the late game.

The cost reduction to 6 and speed change to Burst already makes this spell much more considerable in most slow Ionia decks. It becomes comparable to Starshaping, a 5 mana spell that heals 4 and generates a card.

The enlightened effect reduces the cost of the drawn card by the amount healed. Let’s say that healed a damaged ally 4, you will draw a card and reduce its cost by 4. If you target your nexus and fully heal 6, the drawn card’s cost will be reduced by 6.

Ritual of Renewal could also fit in Lux decks (Lux/Karma), Jayce, Heimer, or even mageseeker archetypes.

I really wanted to keep the comeback mechanic that Ritual of Renewal offers and make it much more interesting and playable without it being too complicated. 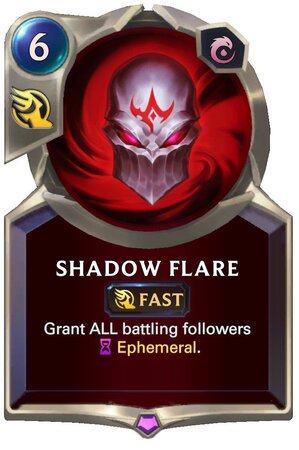 As you’ve probably noticed by now, Ionia has quite a high number of useless spells that have never seen play, Shadow Flare is one of them. It’s a 6 mana Fast speed spell that is supposed to be used as a removal/combo tool for the Ephemerals archetype.

It can be used on attack or defense to grant all battling followers Ephemeral. In theory, this can clear out the opponent’s board if they fully swing which sounds like a great removal tool. The problem is that it allows units to strike before dying, which means taking nexus damage or losing blockers to the attack.

Compared to removal spells like Vengeance or Concerted Strike, Shadow Flare doesn’t help you deal with threats and never advances you to an ahead position.

Another problem is that it doesn’t target champions. In most cases, champions put more pressure compared to followers, they often are the main win condition of each deck, and having a removal spell that can’t interact with them often feels clunky.

Not being able to target or deal with backrow followers is another major issue with this spell. Shadow Flare’s flexibility as a removal spell is just far too low. 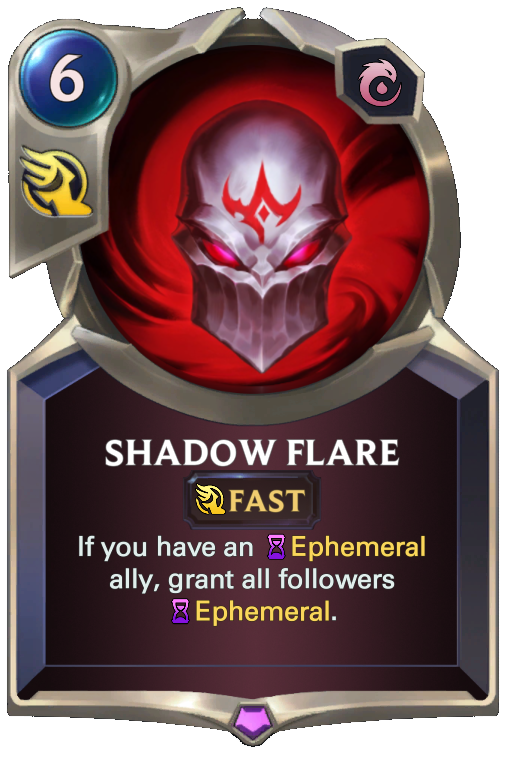 Again, my goal is to redesign cards without changing the main flavor but make them playable, and in this case, make them make sense.

This version is also a 6 mana fast speed spell but with a different effect; if you have an ephemeral ally, it grants all followers, in combat or not, Ephemeral.

This version still only targets followers, but the ability to play this on defense solves the problem of open attacks that would need to be blocked and it deals with backrow followers.

This Shadow Flare balances itself since it needs the condition of having at least one ephemeral ally, which makes it fizzelable like Reckoning for example. And since Ephemerals die at the end of each round, you’ll need to commit mana into summoning an Ephemeral unit to be able to use the spell.

I can see Shadow Flare seeing play in Hecarim/Zed and Viego decks since they both already have great ephemeral synergy. 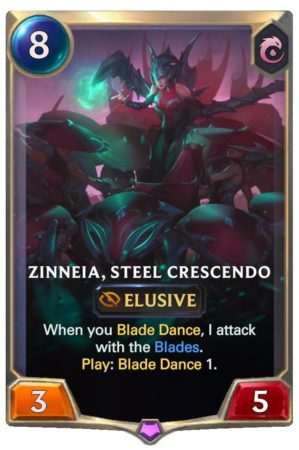 I know what you’re thinking, buffing Irelia decks is terrifying, I agree but that is not my goal here. This is one of Irelia’s followers, it’s designed to be a game finisher/pressure tool for the blade dance archetype but it completely fails to do that.

Zinneia has never seen play in Irelia decks, in fact, people removed it from their decks a couple of hours after the new patch dropped.

It’s an 8 mana Elusive follower that attacks multiple times whenever you blade dance. It also has a strong play effect that makes sense, which is a good thing to have on an expensive follower.

The problem is that 8 mana is way too expensive for the blade dance archetype. Irelia decks have a certain speed, they want to set up their combos in the early 1-2-3 turns and start putting pressure on turns 4-5-6. They usually aim to finish the game by turn 7 in the worst scenarios. Having a follower that comes down much later than 6-7 just doesn’t make sense.

When you play Zinneia on turn 8, you’ll still need to play blade dance cards on turns 9-10+ to get value out of her and finish the game.

Here’s a little graph that illustrates the problem(pardon my paint skills): 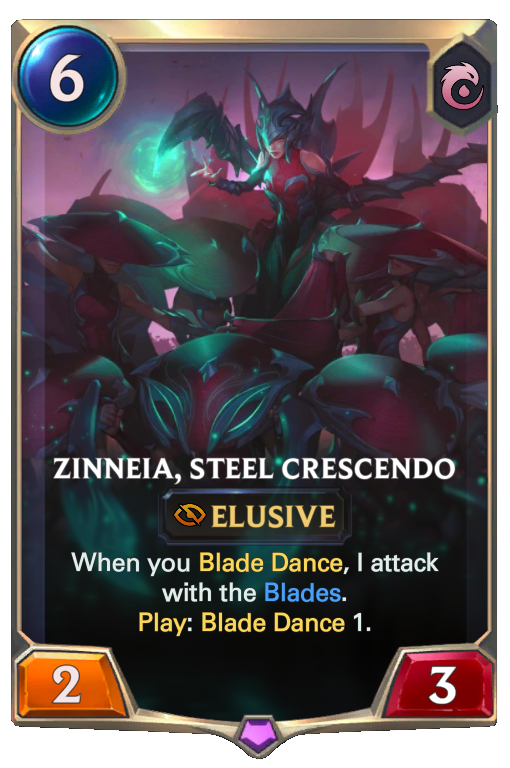 I didn’t rework Zinneia’s effect but decided to simply reduce the mana cost to 6 in addition to changing the statline accordingly, from a 3|5 to a 2|3.

I am aware that this effect can be very hard to balance, but this version should allow Zinneia to fit the speed of the blade dance archetype better without creating any unhealthy situations. 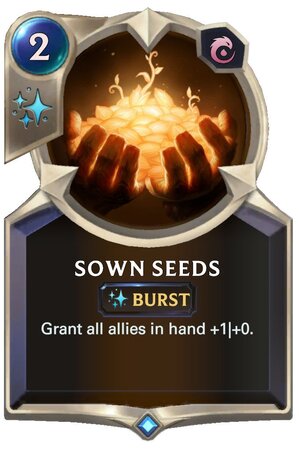 Yes, another Ionia spell that has never seen play. Currently, the only Ionia archetype that would benefit from + attack hand buffs is elusives. A future Ionia hand buff archetype is very likely going to come out which is why this card doesn’t need any major reworks in my opinion.

+1 attack to every unit in hand is not worth it. Why spend 2 mana on this effect when you can bank for spells like Twin Disciplines that can be used during combat. Keeping mana up is also something the opponent has to keep in mind, which can force them to make less optimal plays or play awkwardly.

Even if the hand is full of units, which is the ceiling value for this card, it doesn’t provide that much compared to units that buff the whole board on play or summon like Keeper of Masks in the same region. 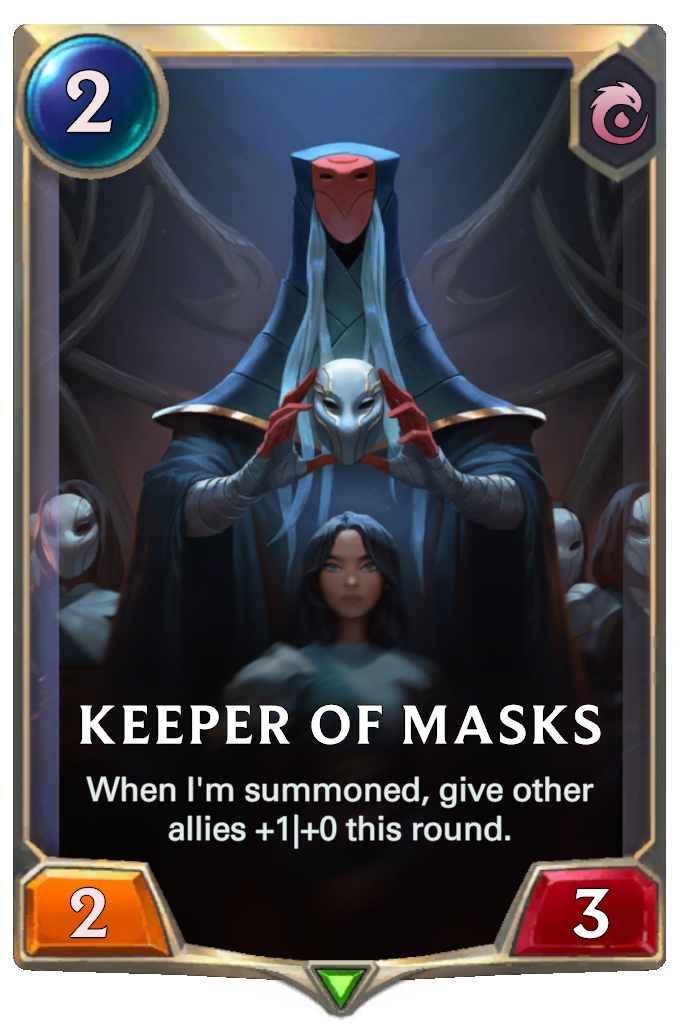 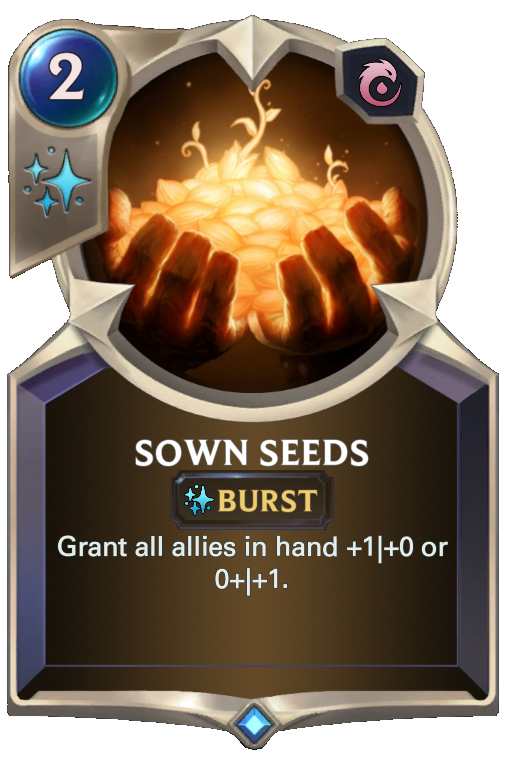 The change that I’m suggesting is quite simple and flavourful. This version of Sown Seeds gives you the option between granting a +1 attack to units in hand or +1 health instead. I like this change for multiple reasons.

First, +1 health to the whole hand can be significantly better in some spots depending on the deck. The flexibility between protecting a unit or putting pressure on the opponent is something really flavorful to Ionia, we see that with Twin Disciplines and Scaled Snapper for example. 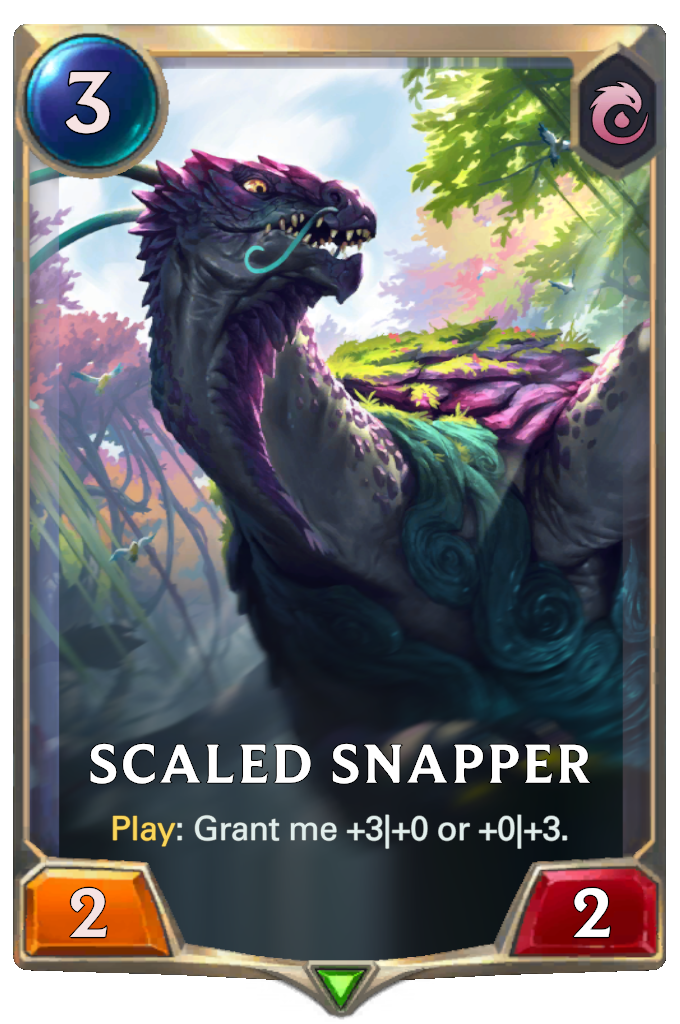 I would love for Ionia to go deeper into cards that have two different effects, defensive and aggro. I could see that being a totally unique archetype for the region.

I quickly created a follower that I imagined would fit really well in this possible future archetype: 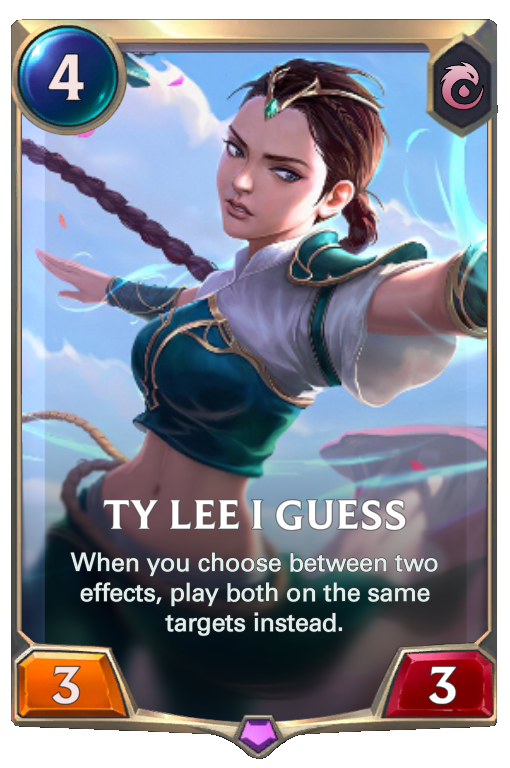 I want to thank “Zinke”, an LoR player and friend who helped me with some of these changes.