The 5 Best Ways to Play Galio in LoR (so far)

The Curious Journey was released this week, and with it comes Galio! The Colossus comes pre-packaged with his Formidable friends, but ultimately the direction the deck takes is left up to interpretation.

Galio levels up at round end with 25 total health across all allies, which is greatly aided by his summon effect granting +3 health to everything.

This can be accomplished inside a variety of strategies and doesn’t necessarily require you to slam three copies of everything with ‘Formidable’ written on it into your deck.

There are loads of approaches you can take when it comes to building a Galio deck, but let’s take a look at five promising ideas from different regions. 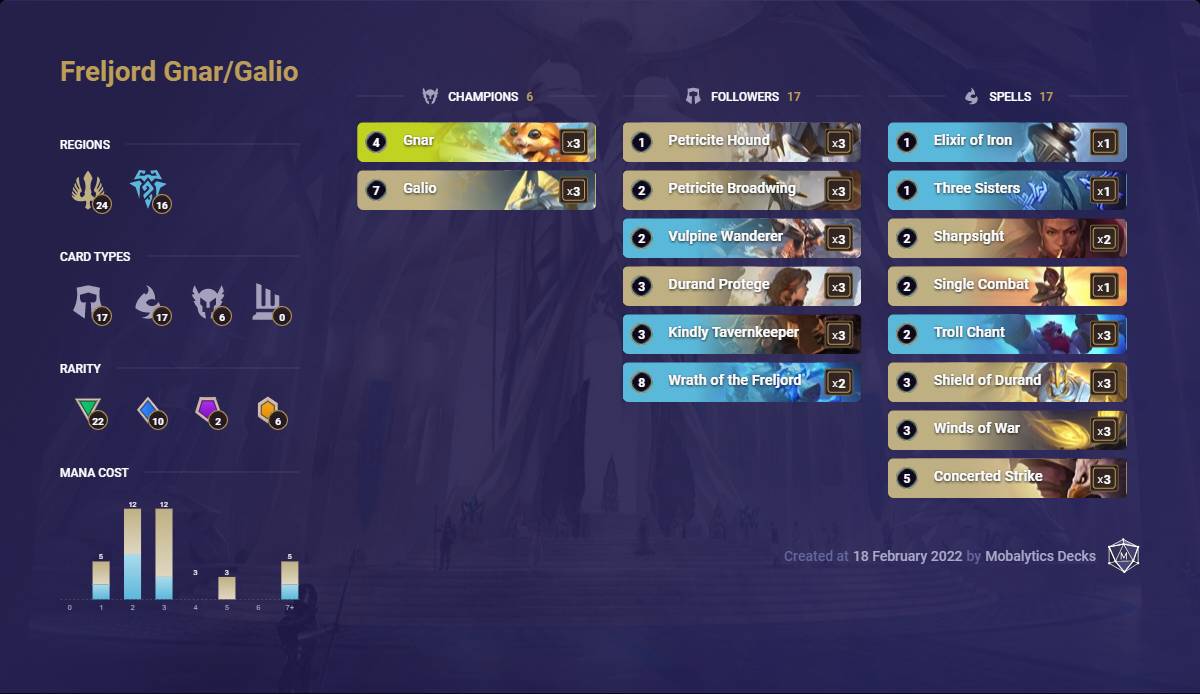 Freljord is a natural home for Galio. You can maximize health buff spells such as Troll Chant and Elixir of Iron, heal back up with Vulpine Wanderer and Kindly Tavernkeeper, or close games with Wrath of the Freljord.

Stance swaps granting +0/+2 and Regeneration is a huge power play on something like a Petricite Broadwing, even before considering other buffs.

It’s not uncommon to find yourself with a 10/10 regenerating Challenger unit on turn 6.

The deck has all the tools to put together a wall of defensive stats, and simply having three or four units alive by the time Galio lands on turn 7 is more than enough to swing the game in your favor.

This particular brew is my favorite way to play Galio so far, and is quite probably the strongest as well. It’s definitely worth a try if you’re in the market for a Formidable deck. 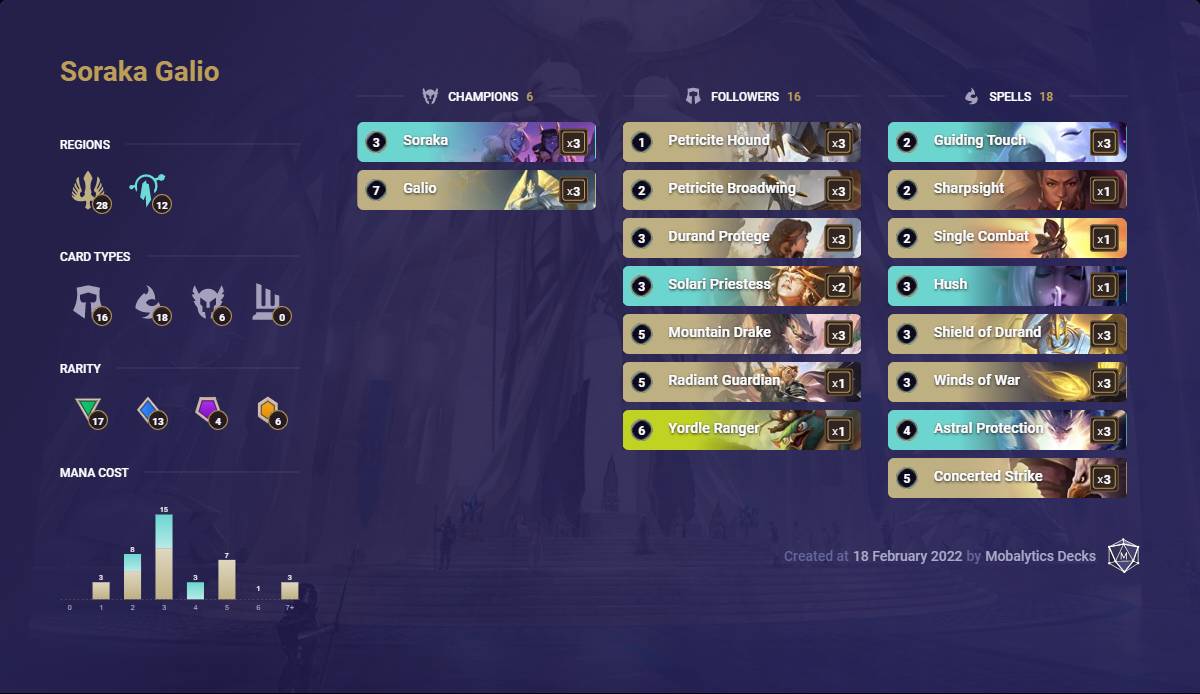 Astral Protection is a ridiculous card with the Formidable keyword, plain and simple.

Targon Galio’s main appeal is the ability to heal units back to full once they’re damaged, as well as a bit of draw from Guiding Touch.

Interestingly, this is one of the rare Soraka decks that doesn’t use Star Spring at all! Soraka’s healing prowess alone is enough to earn her place in this deck, and your units don’t get consistently damaged enough for spring to become a truly threatening wincon in the same way it operates in Soraka/Tahm Kench decks.

Much the same as in the Freljord version, the goal here is to sit back and keep as many units alive as possible going into turn 7, then turn on the heat with enormous Formidable units to close out the game before your opponent can find their footing. 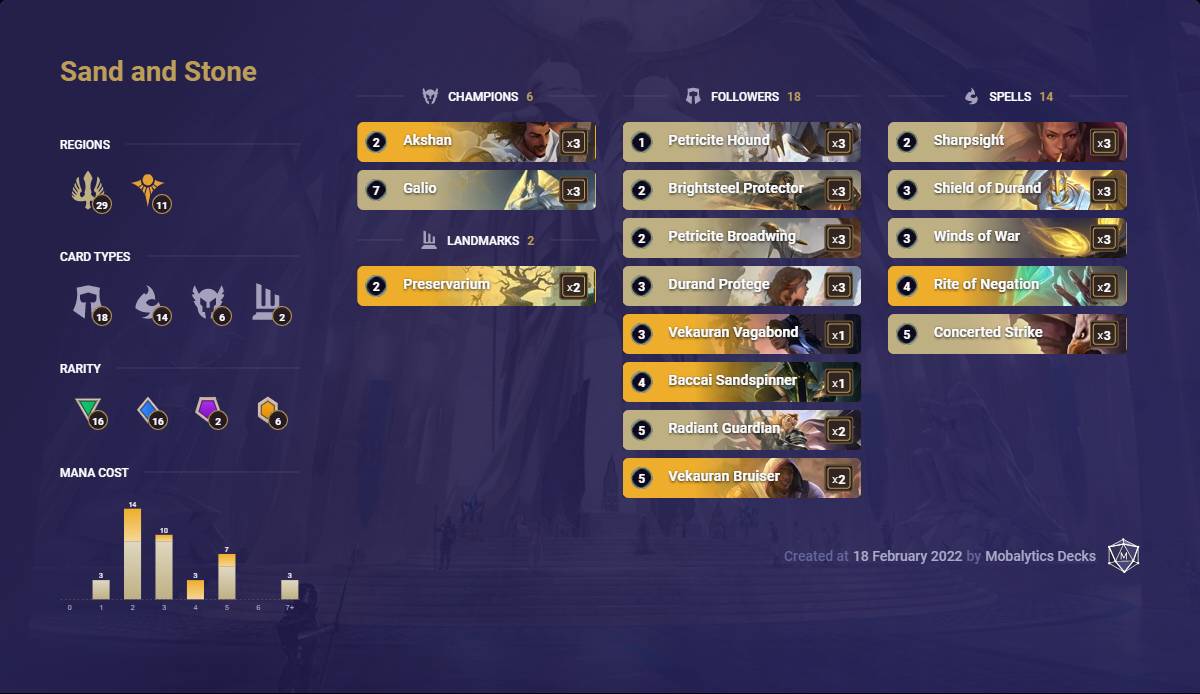 The inclusion of Akshan and Preservarium both give much-needed draw to a Demacian Formidable package that sorely needs it, while Rite of Negation provides insurance later into the game.

Durand Protege and Brightsteel Protector both target your units, meaning you don’t have to spend too many decklist slots on spells – and those extra slots are well spent.

With two Radiant Guardians and a plethora of strong early plays, burn decks stand basically no chance against you.

This list operates in a similar fashion to Sivir/Akshan, with the rogue sentinel taking care of business in the early stages before handing the reins to the ‘finisher champion’, which in this case is Galio instead of Sivir. 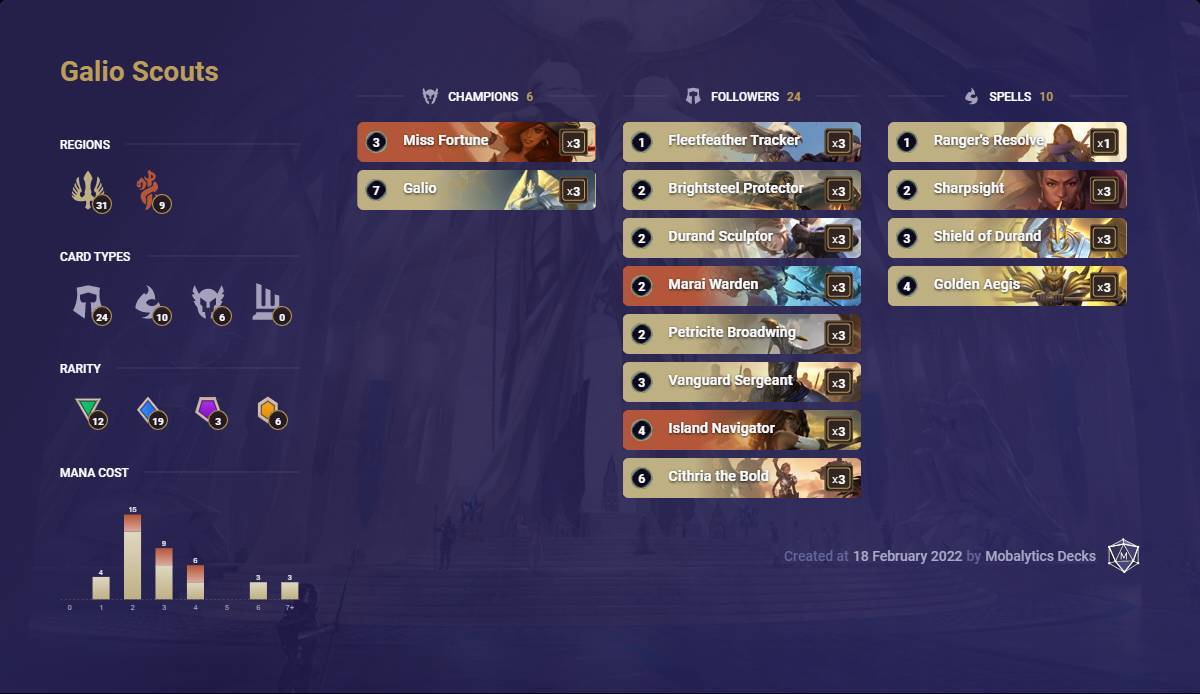 Another deck where Galio is able to make his presence known is in classic Miss Fortune Scouts.

The modern version of scouts already plays to capitalize on having a wide board with Vanguard Sergeant, so there doesn’t have to be many concessions made to fit the big man in.

This list is slower than standard scouts by about one turn in order to curve Cithria the Bold into Galio before going for serious For Demacia + Aegis plays. We make up for the lost speed with extra protection.

Between Shield of Durand, Sharpsight, Brightsteel Protector, and Durand Sculptor opponents are going to have a very difficult time peeling Miss Fortune off the board. 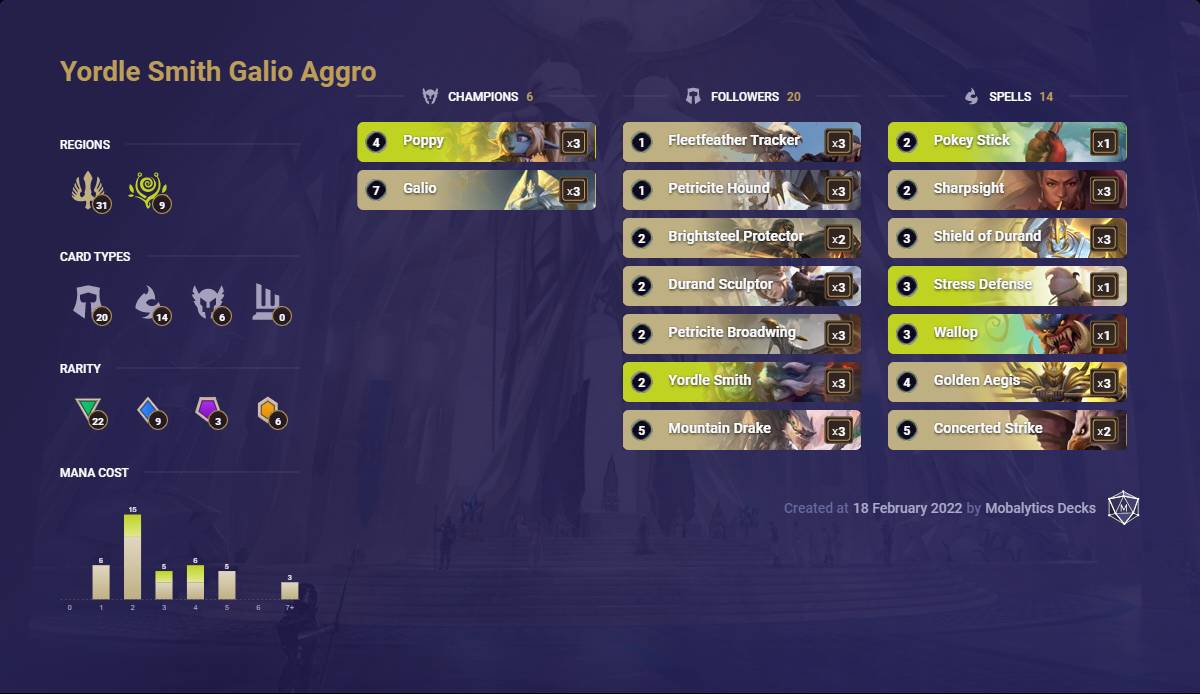 Yordle Smith and Poppy’s ‘equal or less power’ clause is the crux of this deck. Since Formidables have zero power, they can effortlessly receive the buffs from these two all-star units.

This deck comes at you fast – rallying with Poppy and Smith on board is game ending as early as turn 5. It uses the defensive tools from the Formidable package and weaponizes them – Shield of Durand heightens Poppy level 2 from a faraway prospect directly to a five alarm fire.

Galio aggro seems on paper like it shouldn’t work, but when this deck gets going it is nigh unstoppable.

These five are my favorite ones so far, but they really are only the tip of the iceberg as far as different ways to make Galio work.

Hopefully this lends some inspiration for making your own deck featuring Demacia’s new cutting-edge sculptor package!