Pantheon was released in the most recent expansion, Magical Misadventures! He is one of the more flexible champions which allows for many different region combinations and deck builds with him.

His level-up condition is targeting an ally unit in 5 different rounds.

This can be accomplished in a variety of ways within the Targon region, Pantheon’s home region as well as other regions such as Demacia, Shurima, and even Shadow Isles.

The first deck is a deck I personally had a lot of fun playing on day one of the expansion – Pantheon and Akshan. 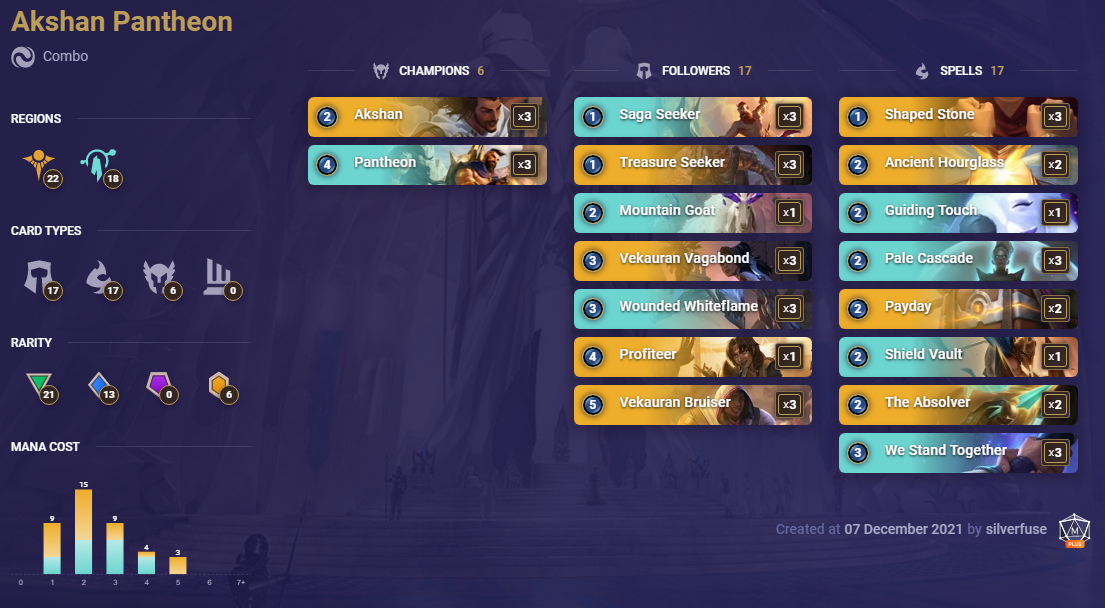 Akshan is already looking to target allies to activate Warlord’s Palace which is also what Pantheon wants. On top of that, the Fated keyword benefits from the allied targeting as well.

I took a bit of a different approach than the standard Akshan Demacian deck that is typically seen in tournament play and decided to add some more Akshan and Pantheon activators in the deck such as Payday.

This card performed extremely well in the deck as being able to grant Pantheon an extra +1|+1 while giving him additional stats or keywords that can help keep him alive. For example, if Pantheon isn’t leveled yet and you give him Spellshield with Payday then you have more options of getting other keywords on him when he levels up as well.

This might mean you get the Lifesteal or Elusive that you were looking for. The other fun part of this deck is getting the loot from Warlord’s Hoard. This allows you to give Akshan and Pantheon +2|+2 and Spellshield. Or in some cases giving units Vulnerable to make your attack stronger.

This deck makes Akshan and Pantheon easy to level with some solid tempo plays and a lot of fun decisions to make. It has been one of my favorite new decks to play this set, so definitely check it out! 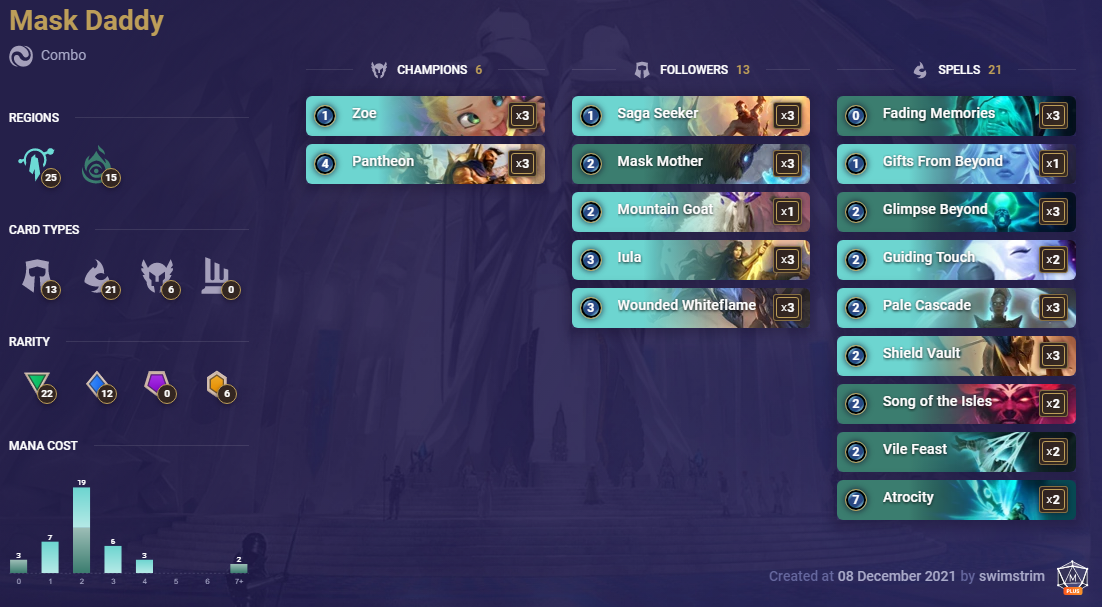 Swim’s day one deck uses Mask Mother and Fading Memories to get multiple Fated procs in a single round.

For example, Pantheon is leveled with keywords, Mask Mother eats Pantheon. Mask Mother gets an extra +1|+1 from Pantheon’s Fated keyword while reactivating Fated at the same time!

This allows you to make a giant mask mother by abusing multiple Fated procs in a round while keeping all the keywords and being able to play additional Pantheons in the future as well! This deck is silly yet quite strong! Have fun with it! 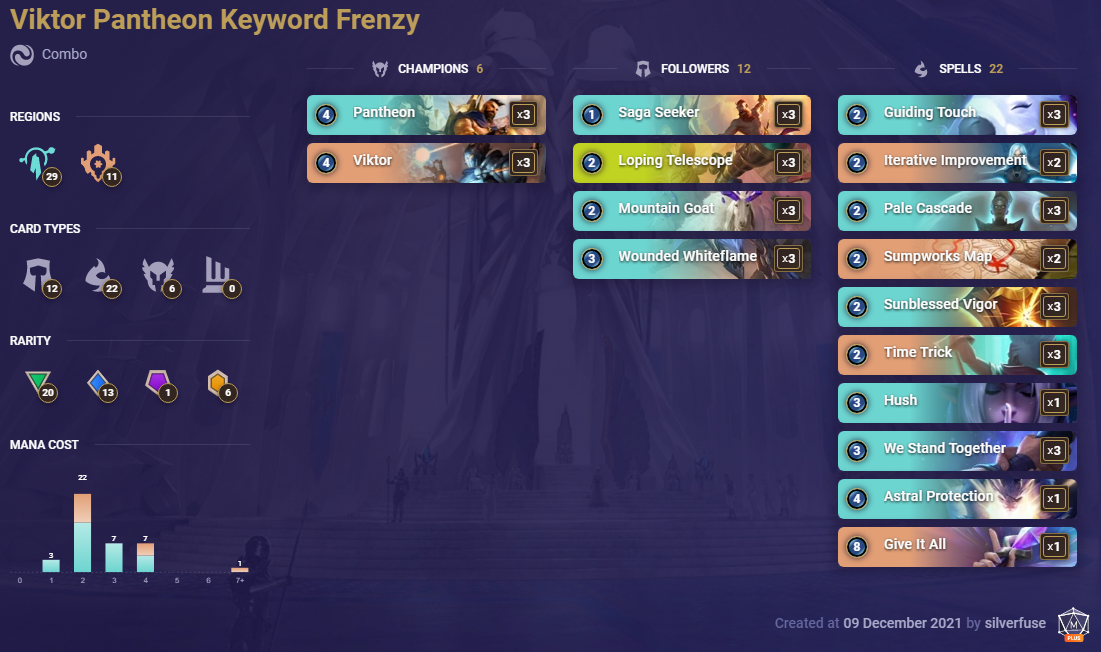 With the jokes of Pantheon putting Viktor in shambles by gaining keywords at a much faster rate, I wanted to put the two together in one deck to make all the keywords!

Naturally, this also means that Give It All is in the deck so Pantheon and Viktor can share keywords that the other one did not achieve. Sharing the Fated keyword to multiple units alone feels pretty nice as it is easy to gain additional stats.

I had a lot of fun with this deck and using Iterative Improvement to make giant units round after round into a Give It All to top it all off! I also found that Sumpworks map on Fated units such as 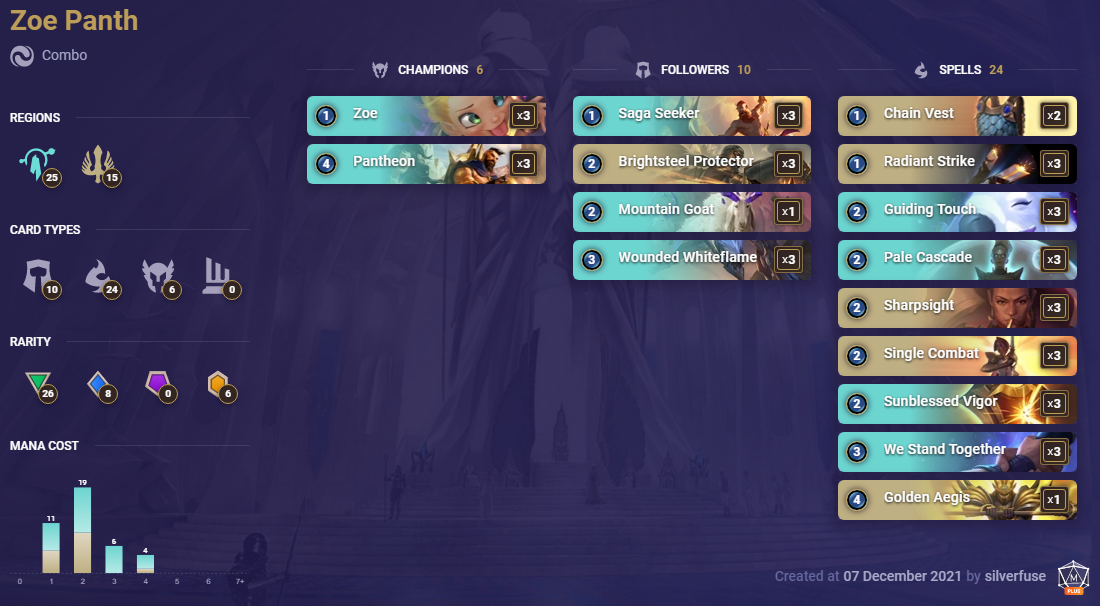 Naturally, Pantheon decks want to buff up units to take advantage of the Fated keyword. The question is what units are worth protecting? The answer is always Zoe. Her level-up condition isn’t the easiest to achieve, but it is often game-winning when she does level up.

This makes Pantheon and Zoe a solid pairing plus low-cost Demacian spells such as Chain Vest and Radiant Strike that will catch your opponent off guard and help protect your valuable units.

This deck heavily relies on Pantheon and Zoe living so it is incredibly important to protect them or else things can quickly take a turn for the worse. This deck isn’t fully optimized and something I had been experimenting with. I wouldn’t be surprised if it needs more Rally’s or the possibility that Taric is just better than Zoe.

However, I think this deck is still worth checking out and making adjustments to as I think it has a solid shell but is still missing some pieces. 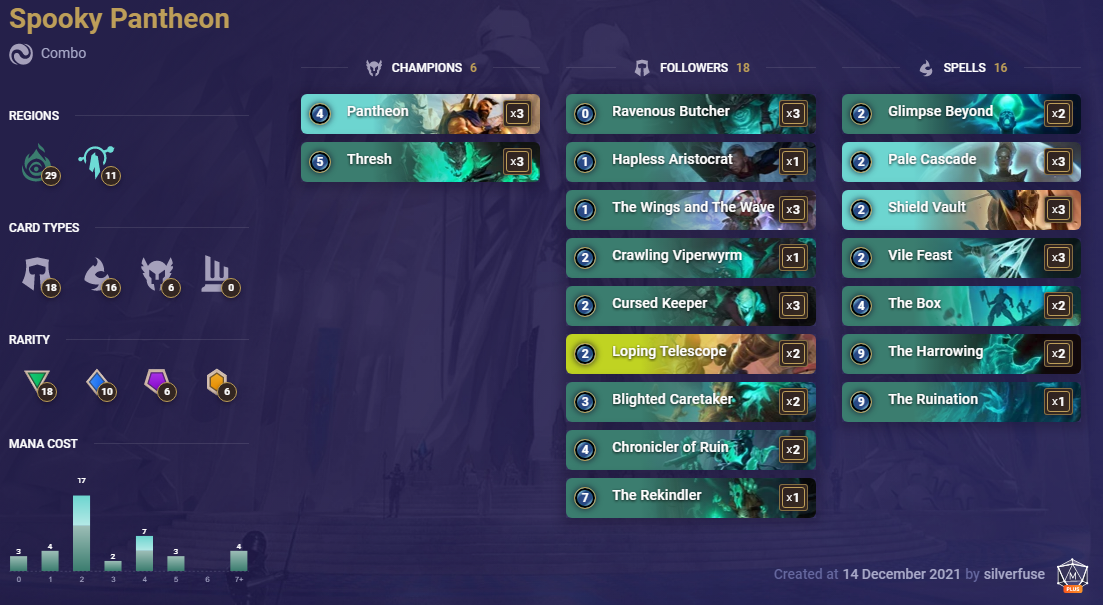 This deck is terrible. Terribly amazing. But also terrible in the most fun ways. The idea of Spooky Pantheon is to play multiple Pantheons through Rekindler and Harrowing. As well as resummoning Pantheon through cards such as Chronicler of Ruin which kills Pantheon and resummons him with more keywords!

The deck is not very consistent as you are playing tokens that target each other to level up Pantheon. If you don’t draw Pantheon, then the game is doomed. This is a deck to play only if you want to see a silly number of Pantheons come from a single Harrowing!

Pantheon has been my favorite champion of the most recent set, and there are still plenty more ways to play and build decks for him! I hope this gives you some inspiration or a fun, new deck to play! Happy gaming!