5 Decks Worth Trying After the 3.4.0 Balance Patch

5 Decks You Should Try After LoR’s 3.4.0 Balance Patch

No one is going to get everything they want out of it, but we’re all going to have some cool new options to test out.

I’m Jordan “WhatAmI” Abronson and I’m here today to check out what the new possibilities might look like with all these buffs and nerfs flying around.

To see which cards were changed, check out our patch breakdown of all the balance changes. 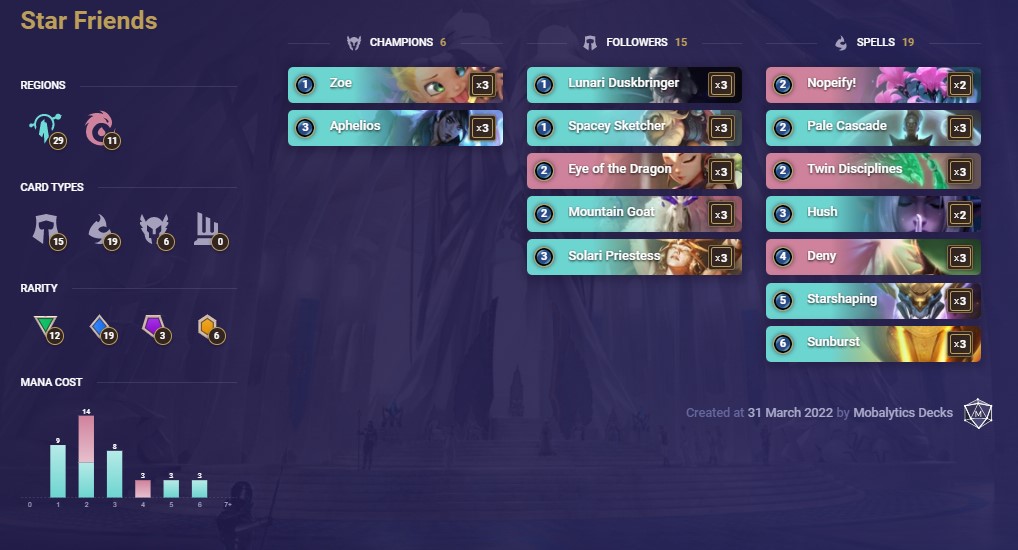 Well, Lee Sin finally got the kick that people have been asking for, well for seasons now really. That said, Targon/Ionia is still a pretty solid control-based region. They just won’t be able to put everything on the back of hard mulligans for multiple Eye of the Dragon every game.

Because of that, we’re going to have to run quite a few more actual units, and I think that means the consistency of the Lee win condition drops enough that he’s not our finisher anymore. Starshaping is happy to step up though and newly out of jail midrange master Aphelios is here to help.

This deck can also level a Zoe incredibly quickly and packs just as many if not more ways to protect her during her ascension. Spamming stats across a board is just as good a way to close games out as it ever was.

We won’t be OTKing anyone any time soon, but I wouldn’t be surprised if some version of this is still a solid control deck in many metagames. Cards like Will of Ionia, Concussive Palm, and even the new Camphor the Doubt or Celestial Wonder are all possibilities as we look into this new world. 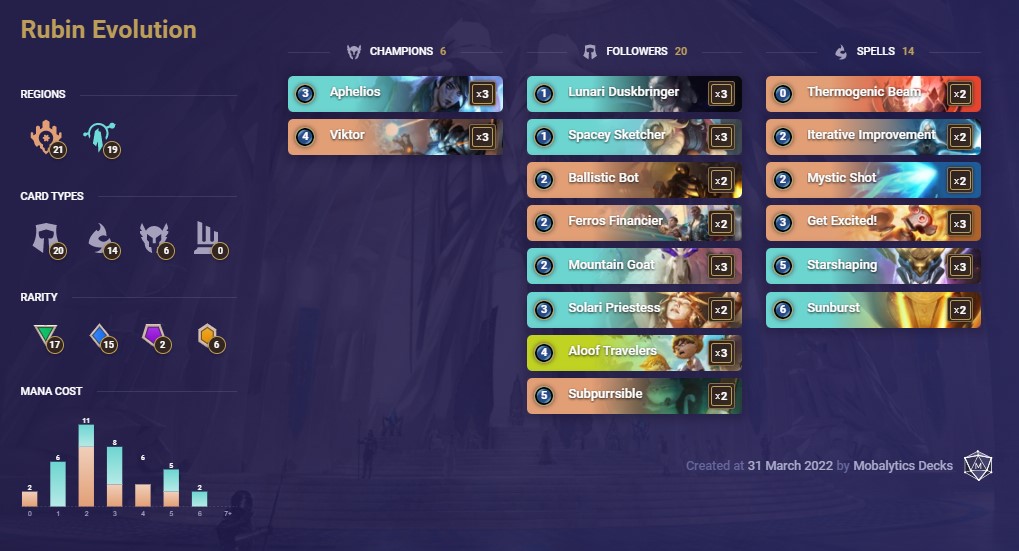 Next on the list is something that I am sure jumped out at everyone the second they saw it. Viktor’s spells no longer cost mana. This is an insane buff and might be enough to take him from extremely bad right to the top in a single zero mana moment.

This deck is designed to level Viktor extraordinarily quickly, and functions as an old school Rubin pile midrange deck while it does. We have lots of different removal, solid value engines, and a plethora of different ways to close out late-game scenarios.

Viktor, Subpurssible, Starshaping, or even iterative chaining off of Aloof travelers to truly grind your opponent down will give you plenty of late-game staying power. You also pack some serious burnout potential as a great deal of the removals in this deck are happy to eventually go face.

Other potential considerations for this list include Boom Baboon, Sump Fumes, and possibly even new card Rocket Barrage. This is one I will be playing personally and we will have to see what the final list looks like, but Zoe/Vi was one of my favorite decks ever and this is its heir apparent. 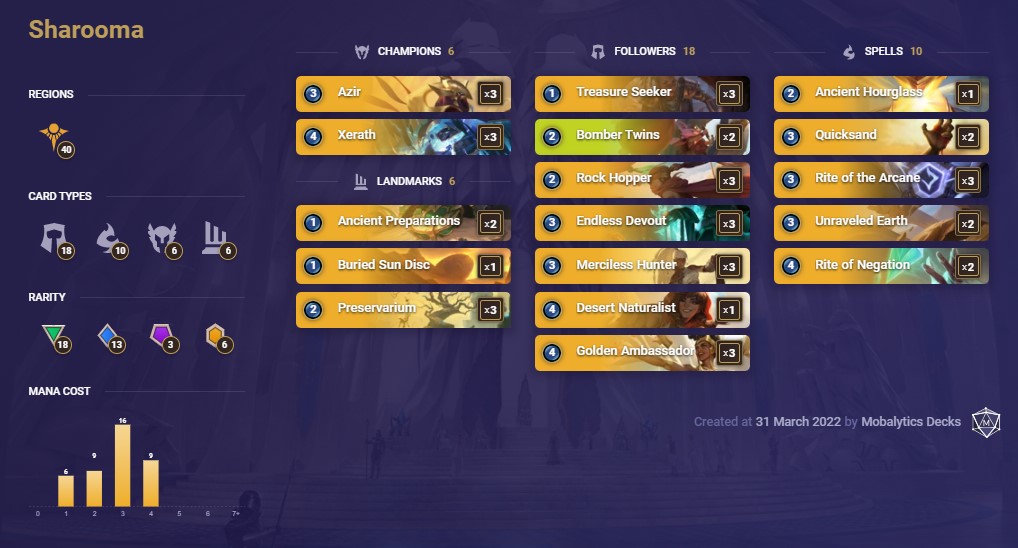 Alright, so Quicksand and Azir got some *serious* buffs given out. Is this going to be enough to jump the movie-loving crew to the top of the standings? Probably not, but it might give them enough of a boost to solidly slot into tier two.

The trick with any deck based around a Cool Thing TM is that it has to still be a deck when that cool thing isn’t happening. I think we might finally be doing enough powerful things here that we fit that criterion.

We’ve got a solid suite of midrange units that can be used to either protect ourselves or apply pressure on our opponent. This version is intentionally pretty low on spells as I wanted to try to be as proactive with leveling our champions and thus our Sun Disc as possible.

We do still have some real interaction though. Merciless Hunter and Right of the Arcane are nasty customers to any small to medium unit our opponent wants to get down, and we spam out Rolling Sands to help Xerath and pull our opponent’s important units with quite reasonable regularity.

Beyond that Xerath lockdown is a real thing, we have a few protection spells for our champions, and our level three champions will close out games reasonably quickly. This deck still has no healing, so I distrust it a tad, but perhaps this more midrange version will allow it to flourish. 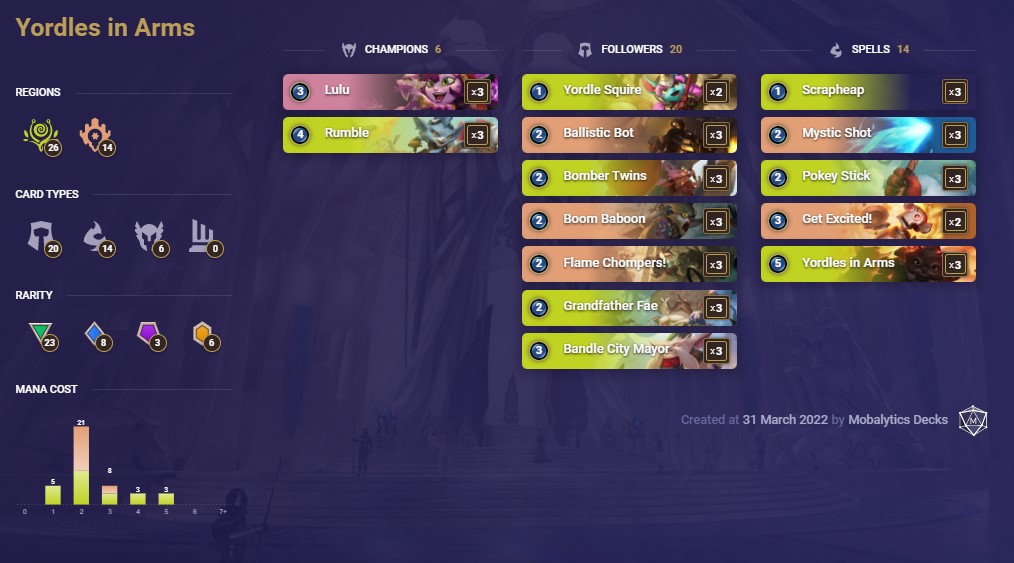 Public enemy number one with a new twist. Scrapheap was always close to being a very solid card in this deck, and with the Mecha-Yordle buffs as well as Rumble now being allowed to benefit from their damage, this seems like a great time to try it out again.

There’s not much to say about this deck that hasn’t already been said. It’s ferocious, powerful, hard to keep down, and packs a burnout package to boot. The only reason this deck stopped seeing quite as much play was due to the rise of the Demacia version, which it beats. Around and around we go.

To get access to all the discard targets we need we’ve given up on Poro Cannon, and of course, Fizz has made room for Rumble. I don’t know if this more resilient version or the old-school Elusive game plan is better, but with the buffs to Rumble, this seems definitively worth testing. 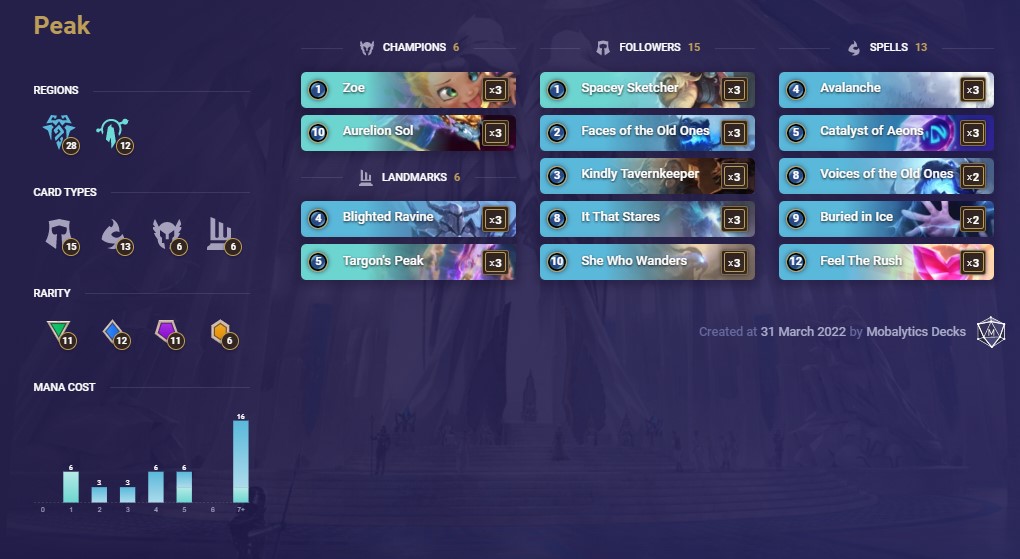 Alright, I’ll admit that this final one is a little bit more on the meme side than the dream side. That said, in metagames where slow control style decks start to build up, metagames the Aphelios has been known to bring, just getting there quicker is a great way to be ahead of the curve.

This deck is packing a whopping eight ramp spells, as well as its signature card in Targon’s peak. The newly buffed She Who Wanders, now able to destroy *Champions* when she hits the field, is an absolute menace, and I predict many games that end in a concession directly after the big dragon resolves.

If that’s not enough you’ve got some solid stall in traditional Freljord style and a giant space dragon to round things out nicely. Feeling the Rush on turn five is one of the best moments in this game, and Peak will occasionally deliver that right to you.

It might epically fail to do things every once in a while, but I’ll tell you as a traditional style control player when I see this deck across the table I panic. This has eaten my bans in tourneys more times than I would like to admit and is a more serious contender than it looks.

As I said at the top, whoever you are reading this there are probably some things you wanted to see in these balance changes that you didn’t get to. That aside though I hope that today I was able to give you some new taking-off points for your Runeterra journey.

Brewing is one of my favorite activities in this game or any other and in my opinion, that means that any well-considered large change is going to be a good one. Disrupt the format, disrupt the meta, and let the brews be free. Good luck to you all out there, and may your Peaks help you more than your opponents.