Turning up the Heat

We haven’t done one of these in a while but this seems like the perfect time for it.

Tired of losing the game on turn five or six to a keyword soup?

Well, we feel you, and we’ve got a couple of different plans to shut them down. 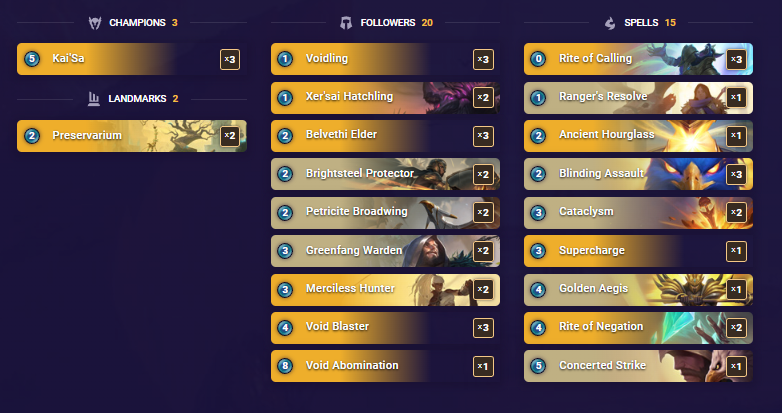 As anyone with half a pulse who hasn’t been hiding under a copium-flavored rock recently knows, Mono Kai’Sa has been the top dog in this metagame lately. And it’s pretty easy to see why. This deck not only has easy protection for its game-ending 6|6 threat that comes down as early as turn five, but they also run six of them.

Worse, every single one of those gets powered up by the last one that was in play. So even if you can deal with the first one or even two pieces of “answer me or die,” nonsense, the power level keeps ramping up.

If that’s not enough the deck rather casually plays four mana 6|6 Overwhelms which, if unanswered, will win the game just fine. And of course, Void Abomination is always lurking waiting to pile every keyword together and clean up any few remaining health or sanity points you might be hiding.

All in all, it’s pretty easy to see why folks are getting some level of frustration with the current titan. However, there are at least a few decks that successfully boast a positive win rate into Kai’Sa and we’re here to detail those today. 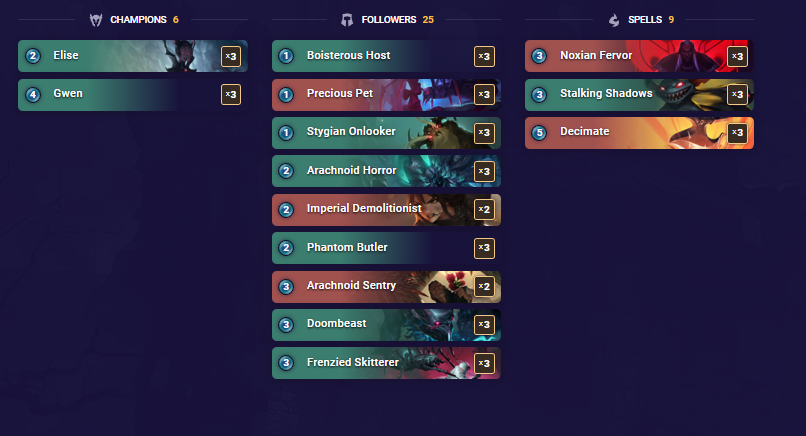 Hey, guess what happens when you cut important defensive pieces like Radiant Guardian to make your combo even more streamlined and difficult to interact with? Yeah, that’s right, Boot, I mean, Decimate to the face.

The reason this deck is so solid into Kai’Sa is that the more they focus on their own theory of how to win the less attention they have to focus on yours. Spiders have been around since the beginning and have always demanded a certain level of attention or they will simply roast your face off.

Well, the top dog has forgotten they exist, so it’s time to remind them. I prefer this burn variant over anything more new school like Annie/Jhin, but I’ve seen people be successful with both. Hit your early pressure and punish the greed that comes from a combo-saturated metagame.

This deck does come with a few new patches of spice to help liven things up though. The powerful Hallowed package led by Gwen puts an extra solid punch in if the games end up going a bit too long for your liking. Does Extra Doom Beast trigger backed by the free attack for my Fearsome units? Yes, please.

On the complete another side of things, sometimes when someone goes ultimately all in on a combo-based win condition, you just have to set your feet and decide that enough is enough. It’s not easy, but sometimes you just have to say no to every question your opponent is trying to ask you.

That’s what this deck aims to do. With an absolute boatload of destroy, silence, and even obliterate effects, the plan is to simply hard shut down all attempts to get a large unit running by our opponent. They do have protection so I won’t pretend it’s necessarily easy, but we’ve got the tools to get it done.

Beyond that our own win condition is one that is near and dear to my heart. Invoke a large threat and then throw it at our opponent’s head. The cool thing about the new Hallowed mechanic in this particular variation is that oft-times we won’t even need to go to the second part of that plan.

Since every celestial that hits the tables pumps our big plan as well as every Hallowed unit that breathes its last, one-shotting our opponent with a single giant dragon is not unreasonable. Well, they might think so, but it happens a solid amount of the time, which we are quite happy about.

This might be the first competitively viable Yasuo deck we have ever truly seen. It’s still likely related to the tier two side of things, but there’s an impressive amount of power here for those willing to look. Even better it is directed squarely at what Kai’Sa wants to do.

Little miss evolve has one glaring weakness. If you remove her from combat her skill doesn’t go off and she does absolutely nothing. That means that all of the stuns in this deck are perfectly positioned to make sure that the Shuriman Evolution is stopped dead in its tracks.

Even better we now have a very solid lockdown element. If you can get Windswept Hillock along with a leveled Katarina then every time you play Katarina you Burst speed stun your opponent’s strongest unit, right through any pesky spell shields or counters.

This means that your opponent is basically forced into an open attack on every one of their turns. That’s something that you can take pretty impressive advantage of with open attack punishers such as Concussive Palm or Steel Tempest courtesy of doubling up on your deck’s signature champion.

All in all, I think it’s important to remember that something is always going to end up being at the top of the heap. No matter how much we try to balance the game there will always be impressively powerful outliers that will find their windows for metagame dominance.

Kai’Sa is just the latest in a series of powerful decks. There aren’t really any ways to totally crush it right now, but there are plenty of tools we can use to at least get positive matchups into it if there starts to be too much ladder domination.