How to Play Against Ezreal

How to Play Against Ezreal (5 Tips)

Ezreal is a fan favorite amongst ADC mains and is the go-to carry when a player is auto-filled in the ADC role.

Whether you love Ezreal or despise his playstyle, you must learn how to play against him to improve your chances of coming out ahead.

In this guide, we will go through some tips and tricks to use against Ezreal to reduce his carry potential once he’s out of the laning phase.

How to play against Ezreal:

Ezreal struggles against champions with burst, a strong early game or strong all-in. If you see that the enemy has picked Ezreal, try to pick someone who has one of those characteristics to make laning against him easier.

Ezreal traditionally needs time to come online and has a rather weak early game. If you can pick someone with a strong early game, then you can abuse his weakness and set him behind.

Champions that counter Ezreal include Yasuo, Tristana, Kai’Sa, and Vayne:

This image and ones similar are taken from the LOL WIKI.

Try to avoid using champions with hooks or slow-moving skill shots such as Thresh or Blitzcrank as Ezreal can easily dodge these abilities with his E.

Instead, pick champions who auto attack a lot, or who have point and click abilities. Champions such as Sona, Senna, and Alistar are all good against Ezreal.

If you’ve had the unfortunate nature of picking Thresh or Blitzcrank and the enemy locks in Ezreal, here are some tips you can use to make dealing with him a little easier:

This makes it harder for him to dodge your ability as he cannot easily use your E to escape the damage. You can bait this out by walking up and making it look like you will throw out your ability without doing so

If you’re not able to get kills in your own lane, you should look to roam around the map and help your allies out. Here’s an in-depth roaming guide we’ve created that will break down how to roam, when to roam, and how to do it, so you’re guaranteed to come out ahead.

Ezreal may use his E recklessly to dodge skill shots from your ADC. When he does this, look for a hook and try to catch him out of position. When his E is on cooldown, he is vulnerable.

Use the element of surprise to make landing hooks easier. If Ezreal doesn’t know you’re in a bush, then his chances of reacting with his E are way lower!

If you can, try to get close to Ezreal to make it easier for you to land this skill shot. The further you’re away from a target, the more time they get to react to it.

It’s also more challenging for you to land skill shots from far away. Being close to your target increases your chances of landing your skill shots.

Ezreal will try to harass you as much as he can with his Q during the laning phase. Ensure that you’re always stood behind at least one minion at all times so the minion can block the damage for you.

Try your absolute hardest to continually adjust your positioning so you’re always behind a minion. Stand as far away from him too to make dodging his Q’s a bit easier as well.

This tip may seem somewhat redundant, but I’ve seen it happen way too many times, and at the end of the day, it’s better to be safe rather than sorry. Ezreal’s Ultimate is global, which means that it has no range and it will travel across the map before leaving Summoners Rift.

Because of this, Ezreal’s map pressure increases once he unlocks his Ultimate. He can use it to hit your allies from across the map.

Whenever Ezreal hits level 6, communicate with your team so they know that he has his Ultimate and that he may use it to snipe them. Spam ping that hs is level 6 or ping his Ultimate.

If Ezreal launches his Ultimate across the map, ping as much as you can. Ping the path that his Ultimate will take so your allies know what’s headed their way.

While his Ultimate is on cooldown, you could look to play aggressive and abuse the ability advantage you’ll have in the lane.

While slightly off-topic, whenever the enemy has a global or semi-global Ultimate like Soraka, Twisted Fate, or Shen, you should always ping that they’ve hit level 6 as your team needs to know that they could potentially impact a fight.

Ezreal is one of the weaker ADC’s in the early game. There are a few reasons for this.

Firstly, he relies more on his Q and his abilities to deal damage, whereas the likes of Draven relies on auto attacks to win trades.

Secondly, Ezreal often takes Tear of the Goddess as a starting item which provides him with sustain but at the cost of a weaker early game. 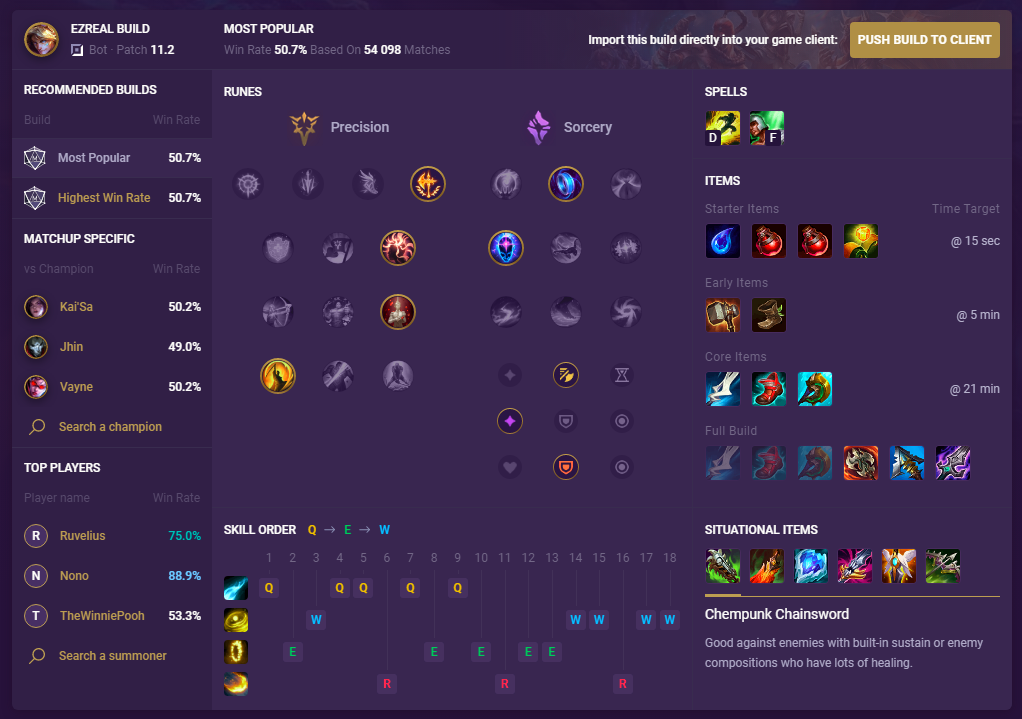 As of Patch 11.2, the most popular build for Ezreal takes Tear as a starting item.

Ezreal wants to stack his Tear as quickly as possible, so he will be focusing on farming and poking while he stacks this item. He will get the overwhelming majority of the stacks from his Q.

Because he wants to stack this, generally speaking, Ezreal will want to play safer in the early game, stack, and then recall to get his first item.

There are a few things you can do to gain an early lead.

Jump on him when he overextends

Just because the enemy has picked Ezreal it doesn’t mean you have to settle for a farm lane! We hope you can use these tips to make dealing with the Explorer a little bit easier.