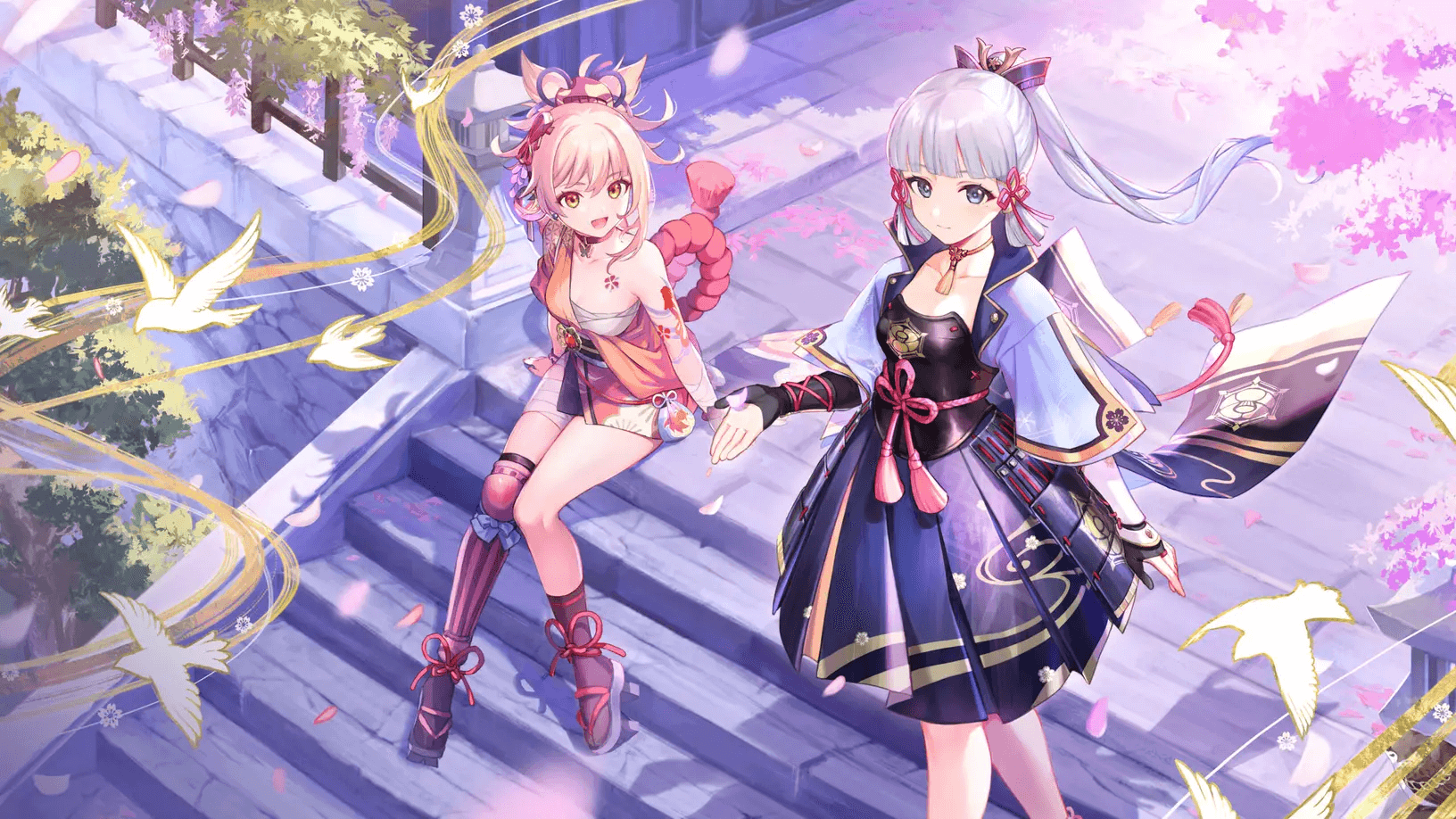 Ayaka is a Cryo Sword user from Inazuma, releasing back in update 2.0.

Even though almost a year has passed since her release, Ayaka is still considered to be one of the best, if not, the best Main DPS unit in the game.

We currently have her ranked as SS on our Genshin Impact tier list.

In this article, I’ll be going over everything you need to know about Ayaka, including her playstyle, best artifacts, weapons, teams, and more.

Let’s start out with Ayaka’s basic attacks. Her normal attack sequence is nothing to write home about, but her charged attack is quite unique. It covers a fairly long range, and can hit multiple enemies. This is great for hitting multiple frozen enemies if you position yourself well.

Ayaka’s skill is a simple ability, launching enemies around her and dealing Cryo damage. This ability doesn’t provide too much damage, but the energy generation is important.

Ayaka’s burst is the money maker of her kit. It’s the reason Ayaka is a powerful Main DPS. This summons a whirlwind that continuously deals Cryo damage. This burst deals an extremely high amount of damage, and is the main source of damage for Ayaka.

Ayaka has a unique dash / sprint in that she can move like Mona. She will disappear into a fog of ice and be able to move on top of water as well.

When Ayaka reappears, she will apply Cryo to nearby enemies and infuse her sword attacks with Cryo.

These infused Cryo attacks will be what you use when your Burst and Skill are on cooldown.

The Burst is clearly the first priority. After that, normal and charged attacks are slightly more prevalent while using Ayaka than her elemental skill. Overall, leveling all of Ayaka’s talents is advised as she frequently uses every part of her kit.

When you’re not using Ayaka’s Burst or Skill, you will be doing Normal and Charged Attacks. Here are the best combos for Ayaka’s attacks.

Note: In between combos, we recommend dashing with Ayaka to reset her animations and also apply Cryo on enemies.

This combo is your bread and butter for hitting multiple enemies. Simply alternate between dashing and holding the attack button.

In a single target situation, this combo will result in the best damage for Ayaka.

As you ascend Ayaka, she will gain Crit DMG.

This is a nice little bonus to keep in mind while playing Ayaka. After using her skill, your basic attacks will have a small damage bonus.

Kanten Senmyou Blessing: When the Cryo application at the end of Kamisato Art: Senho hits an opponent, Kamisato Ayaka gains the following effects:

This buff is very important to keep in mind for Ayaka. Before casting your burst, you will want to buff up Ayaka with this passive. Make sure to dash or sprint onto an enemy to maintain this buff and empower your burst.

Fruits of Shinsa: When Ayaka crafts Weapon Ascension Materials, she has a 10% chance to receive double the product. 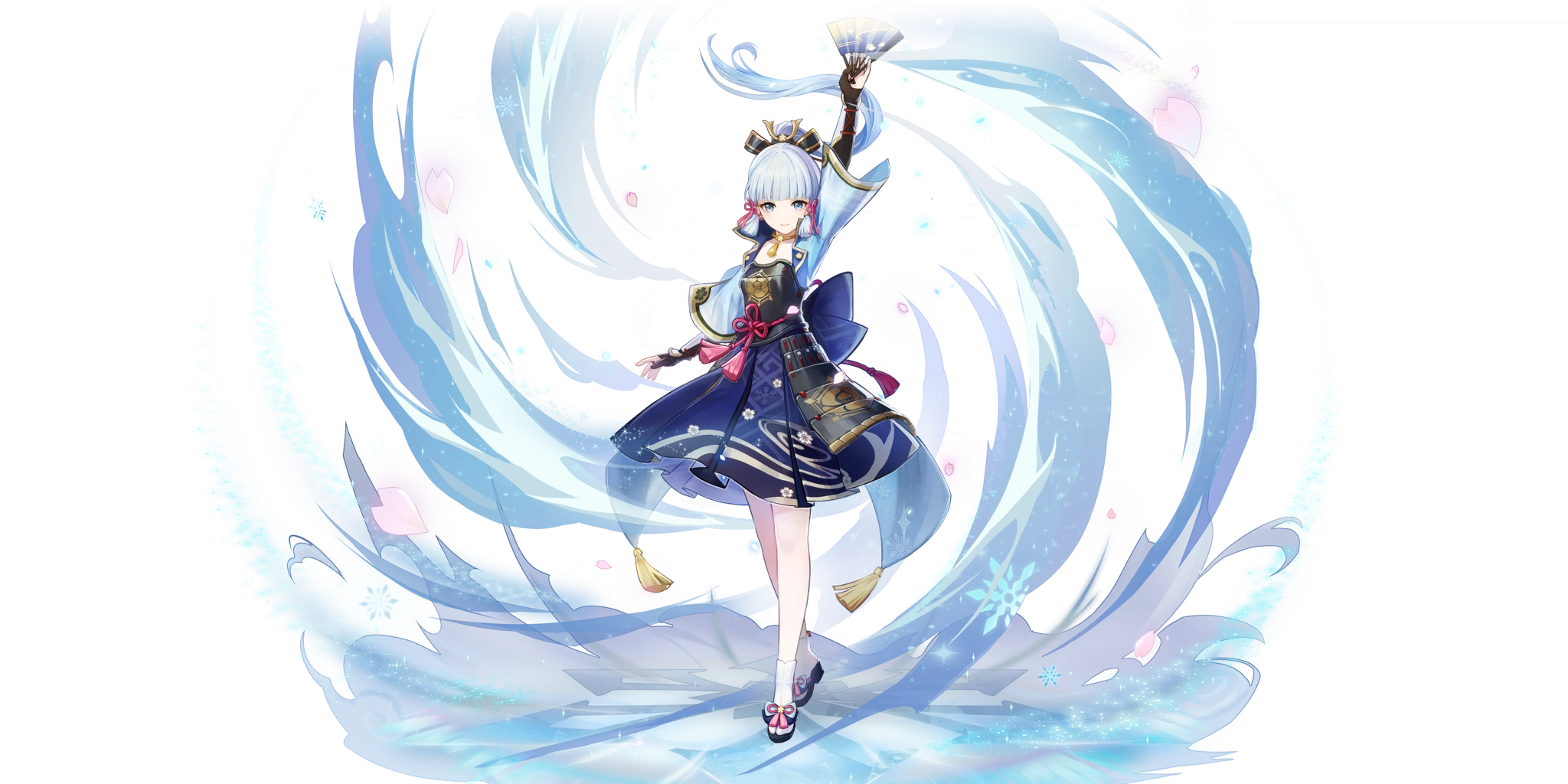 Ayaka is a character that is extremely powerful even without constellations. Even still, the constellations do provide power increases if you are willing to spend or save up for more copies. Ayaka will be just fine at C0, but here’s a quick assessment of her constellations.

When Kamisato Ayaka’s Normal or Charged Attacks deal Cryo DMG to opponents, it has a 50% chance of decreasing the CD of Kamisato Art: Hyouka by 0.3s. This effect can occur once every 0.1s.

Constellation 2: Blizzard Blade Seki no To

When casting Kamisato Art: Soumetsu, unleashes 2 smaller additional Frostflake Seki no To, each dealing 20% of the original storm’s DMG.

Increases the Level of Kamisato Art: Soumetsu by 3.
Maximum upgrade level is 15.

Opponents damaged by Kamisato Art: Soumetsu’s Frostflake Seki no To will have their DEF decreased by 30% for 6s.

Increase the Level of Kamisato Art: Hyouka by 3.
Maximum upgrade level is 15.

Kamisato Ayaka gains Usurahi Butou every 10s, increasing her Charged Attack DMG by 298%. This buff will be cleared 0.5s after Ayaka’s Charged ATK hits an opponent, after which the timer for this ability will restart.

Ayaka’s playstyle and team always center around her burst. It’s about empowering her burst as much as possible, and making sure that you can always cast it off cooldown.

Since Ayaka’s damage consists of mainly her burst, missing the enemy with it can be a hefty mistake. Positioning and targeting are important to keep in mind while playing Ayaka.

You may enjoy playing Ayaka if you like the idea of one important burst dealing a majority of the damage.

Using this set allows you to gain a massive amount of Crit Rate. This in turn allows you to build into ATK and Crit DMG in your artifacts and weapons.

If you’re just starting out in the game, don’t worry too much about Blizzard Strayer yet. You can use the early game pieces in the game like Berserker, Sojourner, etc.

The main stats for Ayaka mirror that of almost all Main DPS units in the game.

Usually, characters will want a Crit DMG or Crit Rate Circlet. In the case of Ayaka, since you already have a lot of Crit Rate through Blizzard Strayer, you will likely want to have a Crit DMG Circlet. An ATK Circlet can also be strong depending on the rest of your stats and what weapon you use. In most cases, Crit DMG will be recommended, but ATK% will also do the job.

Sands and Goblet are self explanatory. ATK% Sands is often the best choice on DPS units, and Cryo DMG is a given considering all of Ayaka’s damage will be Cryo.

As previously explained, Crit DMG and ATK% will be the main ways to scale Ayaka’s damage up.

Energy Recharge is also important to invest into up to a certain point. A general ballpark to reach for is around 140% Energy Recharge. This should help you comfortably use Ayaka’s burst off cooldown.

Lastly, Crit Rate and Flat ATK are also decent substats to have, but aren’t as important as the top two.

Here’s a quick rundown of the best 5-star weapons for Ayaka. 5-Star weapons other than these are also strong options, as they have high stats, but these are the best ones to have.

This is Ayaka’s signature weapon as it came out the same time Ayaka did and is tailor made for her. This weapon is also arguably the strongest 5-star weapon in the game. This is without a doubt Ayaka’s best weapon.

This weapon has a substat of Crit Rate, which is wasted on a Cryo DPS like Ayaka. This will make it easy to overcap Crit Rate with the Blizzard Strayer set. Even still, this weapon has high base ATK, and you can ignore all Crit Rate substats if you use this weapon.

This weapon is basically a nice stat stick for Ayaka. The effect isn’t anything amazing, but it’s usable. The ATK% substat is also nice for Ayaka’s damage.

This weapon is likely your best choice for a 4-star weapon on Ayaka. The passive ability helps Ayaka gain energy, allowing less need for Energy Recharge substats on gear. The ATK% substat is also a nice boost to damage.

This sword is nice simply because it has a Crit DMG substat which pairs very well with Ayaka and Blizzard Strayer. The passive is nothing to write home about, but it can be nice.

This weapon is similar to Jade Cutter but as a 4-star. It’s a nice stat stick, but the Crit Rate substat can go to waste if you overcap.

Lastly for our guide, I’m going to go over how to build the best Ayaka teams.

A Freeze team is the bread and butter for Ayaka. Freezing enemies will give Blizzard Strayer the bonus 40% Crit Rate. It’s also very easy to play as enemies will not move while frozen, allowing you to hit the full Elemental Burst on enemies.

There will be fights where you cannot freeze the enemy, but these teams will still perform well.

Here’s a quick rundown of what a team will look like.

The Cryo character can be just about any Cryo character you want or have. Characters like Kaeya, Rosaria, Diona, Shenhe, etc all have their own strengths to add to the team.

If you want your team to be more offensive, you can use Shenhe or Rosaria. If you want some survivability, you can opt to use Diona instead. If you have nobody else, you can use Kaeya (Kaeya is still good).

For the hydro unit, we want someone that can easily apply Hydro off field in order to freeze enemies. Characters like Mona, Kokomi, Ayato, or Xingqiu can all fulfill this role.

Lastly, we have an Anemo support. Since Ayaka deals Cryo damage, having an Anemo support to shred enemy resistance with VV set is a must. For this slot, you can use just about any Anemo character you want or have.

Venti has nice synergy with Ayaka as her Burst and Charged Attacks can hit enemies within Venti’s Burst.

Kazuha is another strong option if you have him.

This wraps up just about everything you need to know to play and build Ayaka. Are there other details or things you can learn, of course. This guide is simply meant to cover the essentials.

At the time of writing this article, Ayaka is currently the featured limited character. If you’re on the fence about Ayaka, just know that she is arguably the strongest main DPS unit in the game. If this build guide made you interested, be sure to wish on her banner before it’s over.