Best Cards in the Foundation’s Gauntlet

Hi guys, Kuvi here with another banger article, this time it’s about something I’ve been waiting for quite some time. In the last Patch 3.20.0 notes, Riot announced what they call “Timewinder Gauntlets”. The format is a best of 1, 3 decks ban format with different champions and region combinations.

The first gauntlet of the series is the Foundation’s Gauntlet, where people can only deck build with cards from the very first Foundation set.

You may think that the meta is going to be the same as the previous one but bare in mind that a lot of cards from the foundations set have been reworked or buffed so a different meta is to be expected.

Today we’re going to go over the best cards you can use to understand what the meta will look like and how decks should be built to counter it.

Let’s Start With the Best Champions 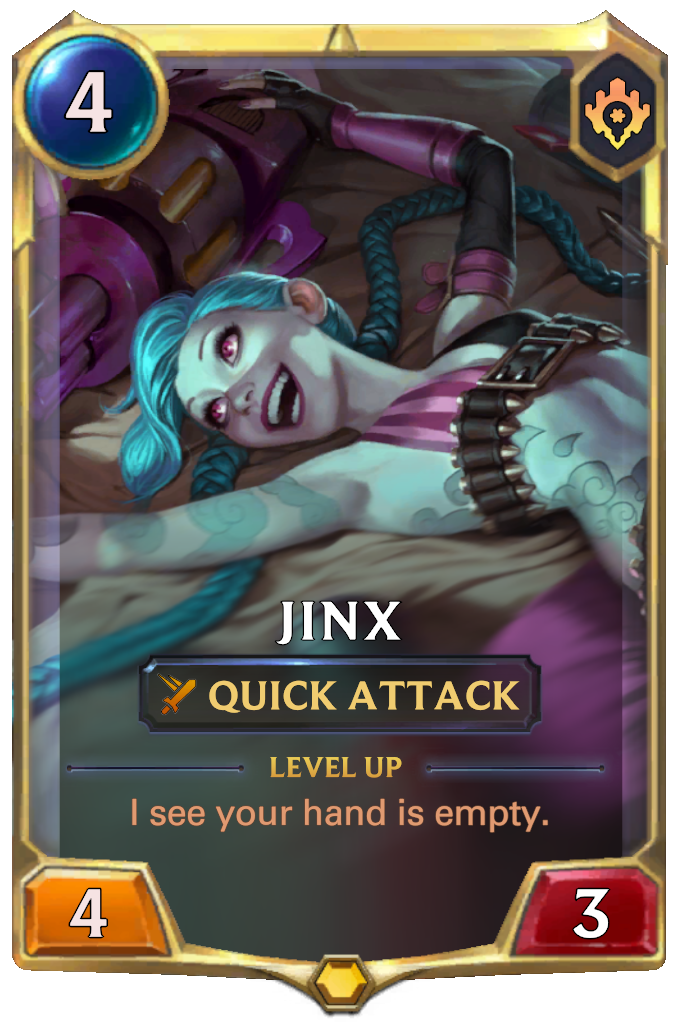 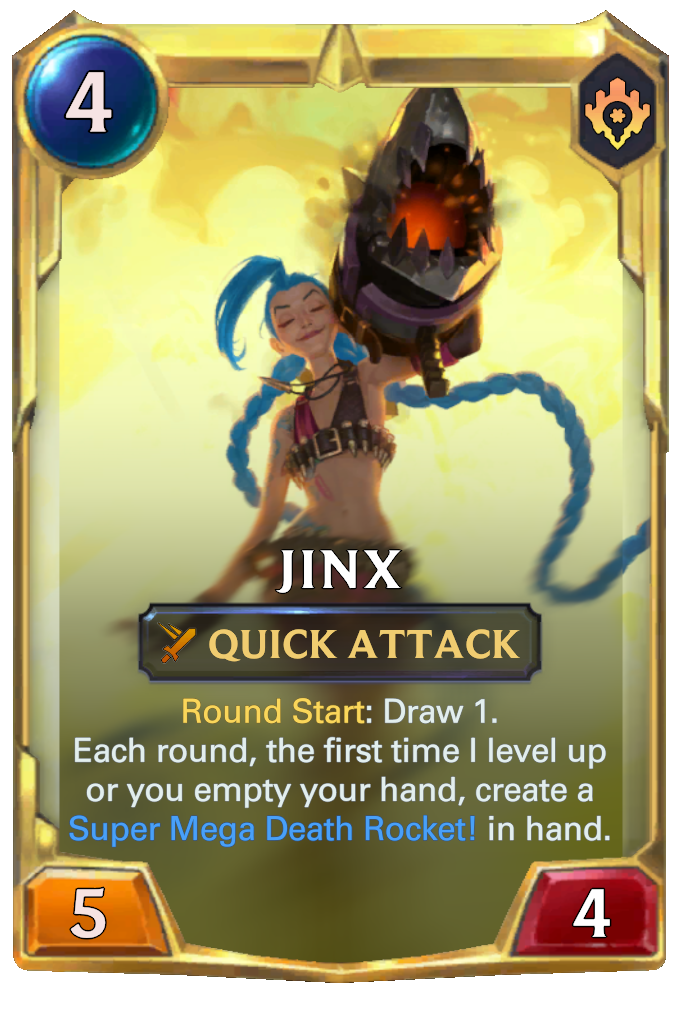 Jinx has recently been buffed, she now gains her super mega death rocket on level-up, which is huge.

Discard has always been one of the strongest archetypes in the foundation set due to removal being somewhat exclusively only played in SI/Frejlord control.

Jinx/Draven with a lot of swarm, Vision, and Battlecaster to push extremely high amounts of damage and the refill with Rummage and Augmented Experimenter makes discard the best aggro deck you can play in this gauntlet. 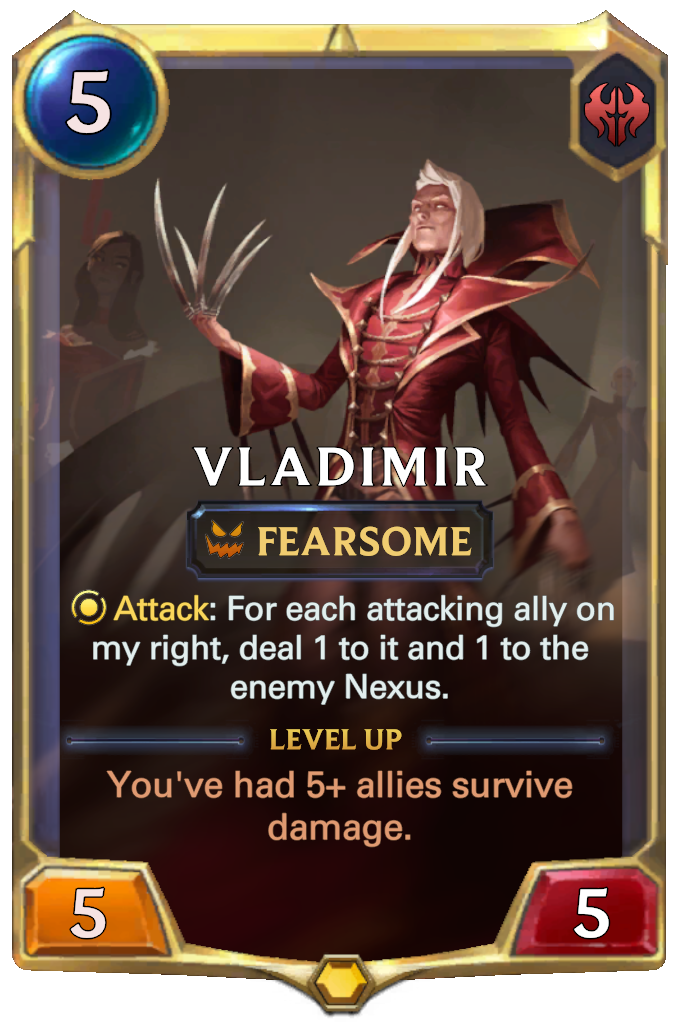 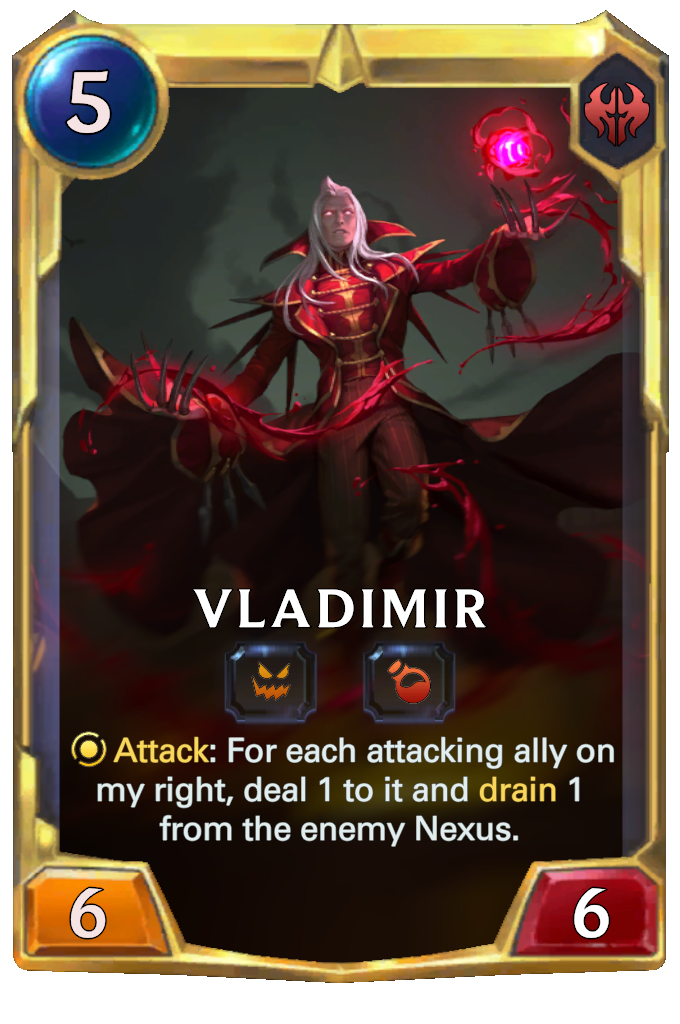 Vladimir was debatably the worst foundations champion. Since then, he’s been buffed more times than I can remember which makes him terrifying to play against.

Even though the self-damage archetype sees real support much later than the foundations set with cards like Scargrounds and Troll chant, Vladimir is still one of the strongest standalone champions in this mode.

Noxus/Frejlord seems to be the only archetype Vladimir can fit in, using draw from Trifarian Assessor, Babbling Bjerg, and Avarosan Hearthguard.

I personally used this homebrewed list to get my 7 wins without losing a single game. 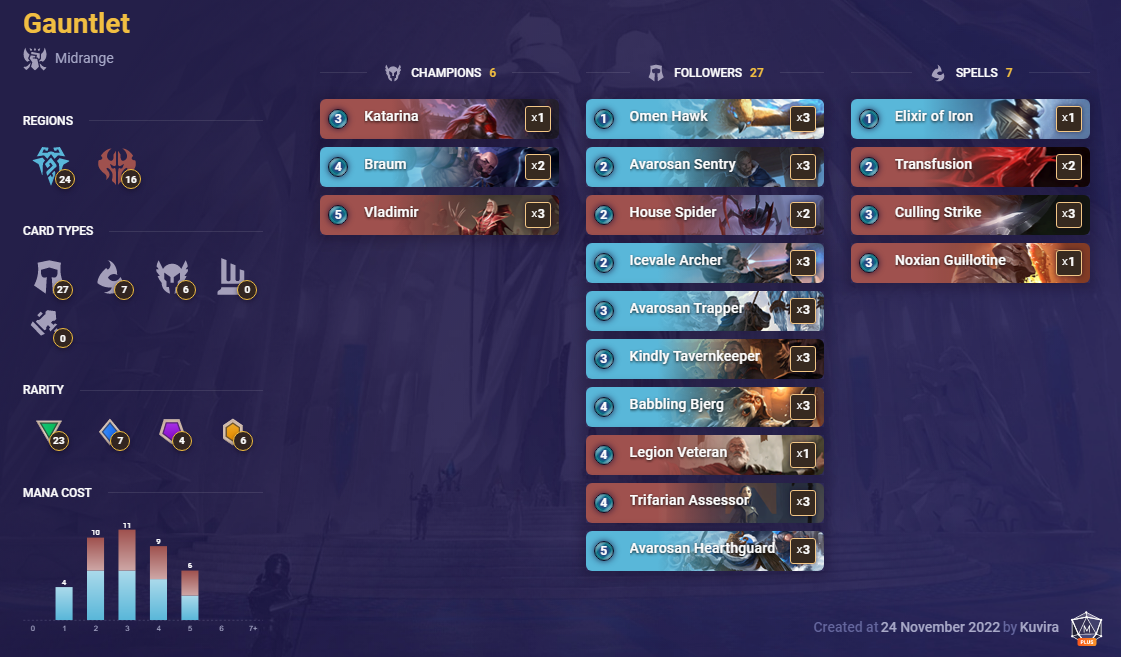 If your goal is to not lose to aggro at all then Vladimir got your back! 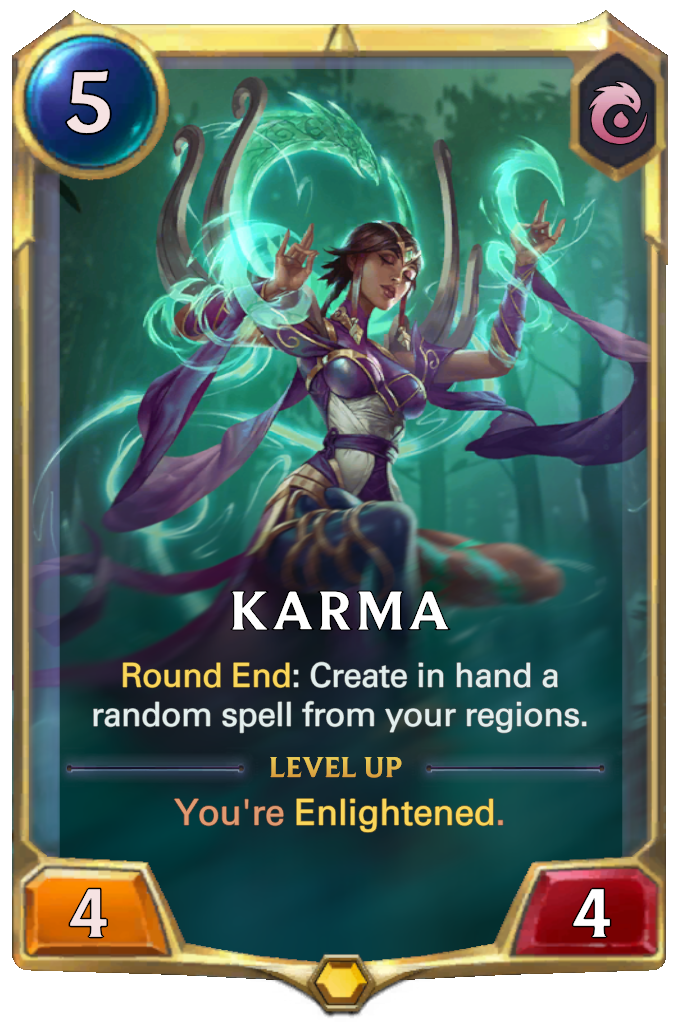 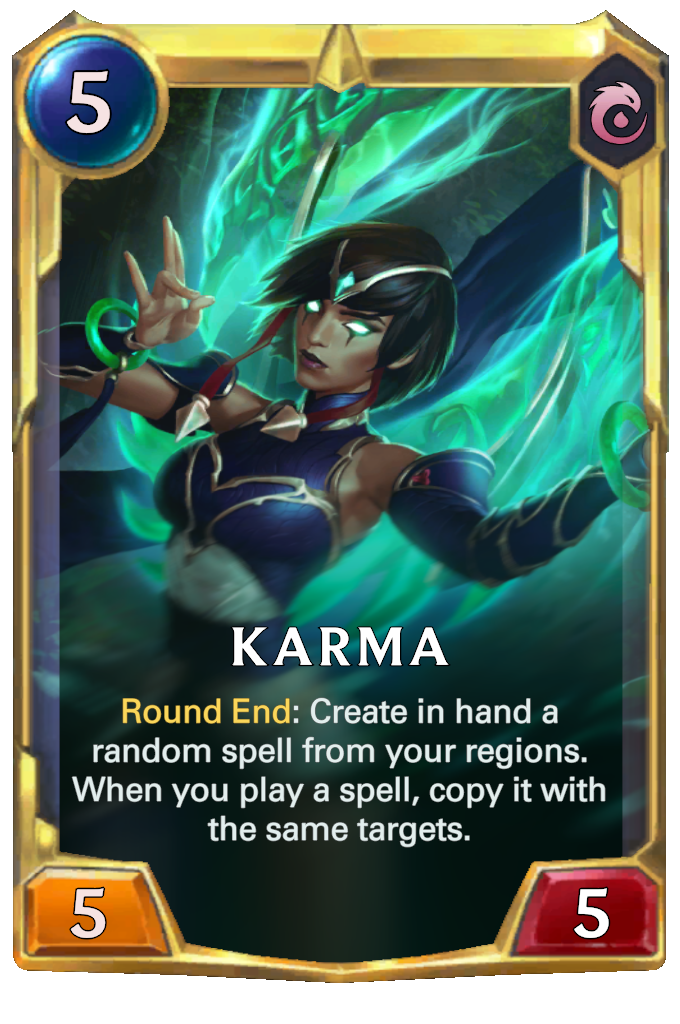 Karma was powerful during the game’s early sets, she was in fact nerfed right away due to Ezreal Karma being such a problematic deck. However, karma received several buffs in the last couple of patches, her level two also generates spells now and she’s much harder to kill as a 5-mana 4|4.

The lack of removal to kill karma especially through Deny and Twin Disciplines makes her one of the best win conditions in this mode.

Any champion or card doesn’t match the value generation. Still, the problem is that she’s essentially locked into Shadow Isles as a second region due to the lack of good spells to copy outside of SI. Withering Wail and Grasp of the undying are what makes Karma/SI such a strong control deck.

Lux/Karma is also a solid possibility even though I don’t feel like Demacia offers the same level of value from copied spells and struggles a lot against early aggression compared to SI with its Vile Feast. 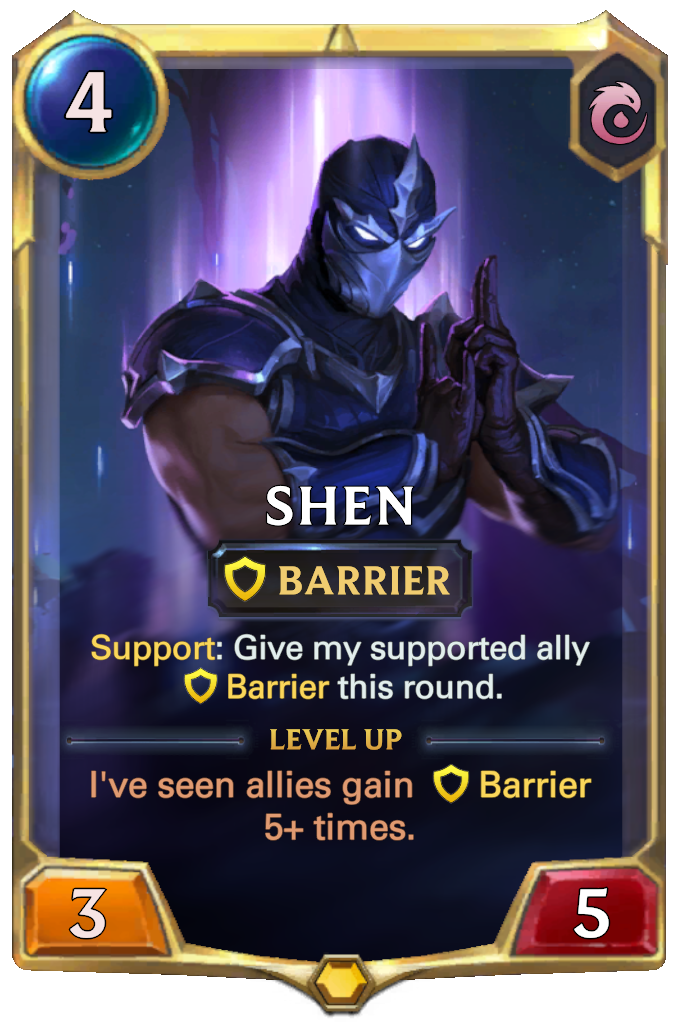 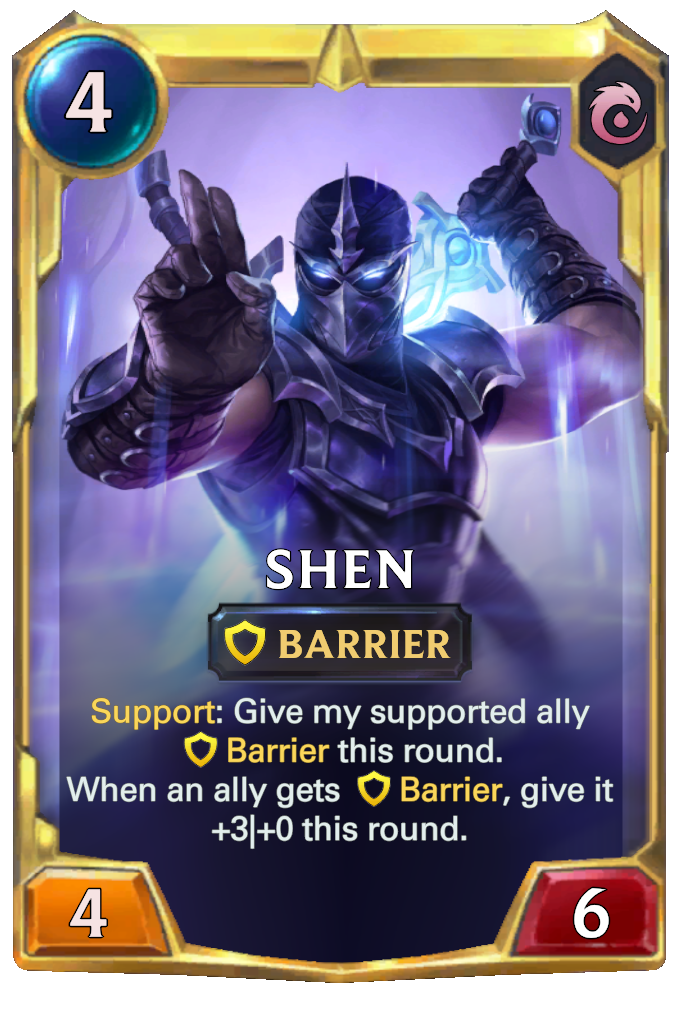 Another champion from Ionia that’s become incredibly versatile and overall very strong compared to all the other foundation cards after the buffs it has received.

Shen now has Barrier himself which makes him the BEST development punisher in Ionia since Concussive Palm wasn’t present in this set.

The best way to play Shen is to combine him with Fiora. Even though she’s also a 4 drop now and the curve isn’t as optimal, the combination of both on the board is still incredibly hard to deal with especially with Deny, Twin Disciplines, and the Barriers this deck has access to.

Shen was also part of the lineup that I used to get the 7 wins, it’s a great deck that basically smashes anything midrange or control (except for Noxus/Frejlord). 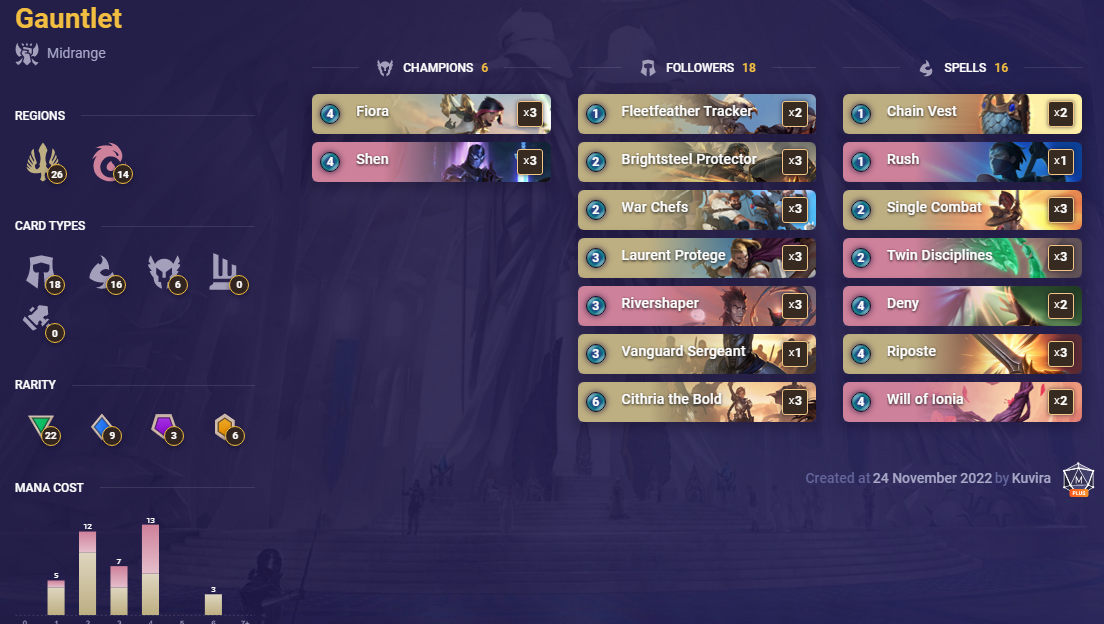 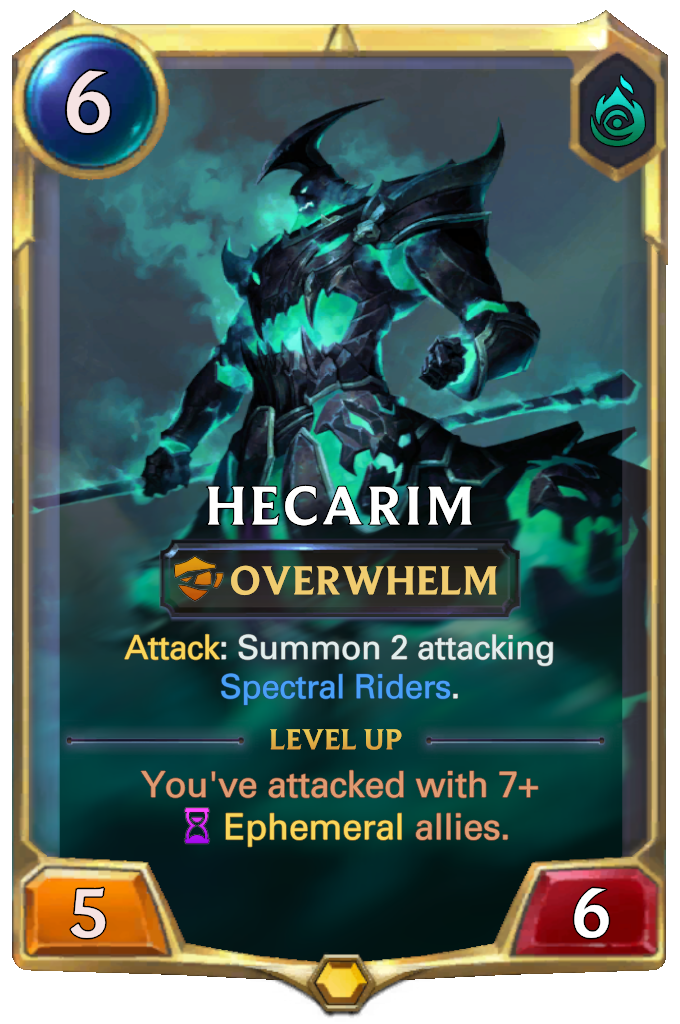 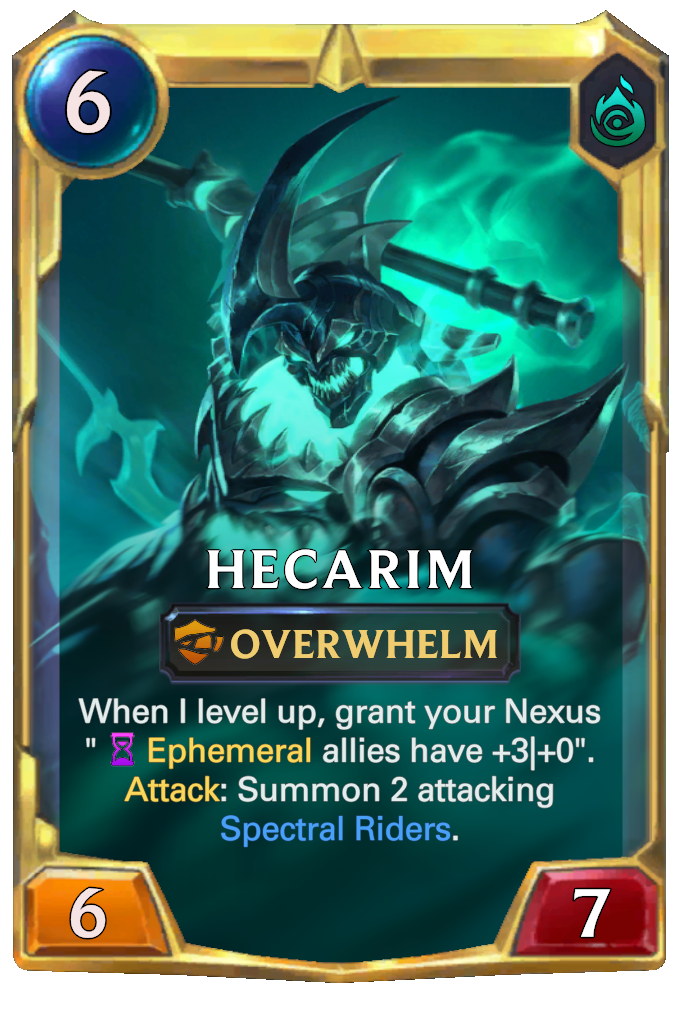 Hecarim is also another champion from the foundation set that has been heavily changed, nerfed multiple times at first then buffed mainly due to the game’s powercreep and the introduction of new and better removal spells.

The only way to deal with Hecarim is to use Wil of Ionia to delay the attack turn and try to pressure them with the tempo gained in that exchange.

However, Will of Ionia only slows them down, it doesn’t actually remove the threat. Cards like Vengeance and Thermogenic Beam also don’t solve the problem since Hecarim is usually played in SI decks that run the Rekindler and The Harrowing, so killing Hecarims only allows those cards to be played.

This makes Hecarim one of the best finishers in this whole set Fortunately the whole Ephemerals archetype isn’t as strong, they are very vulnerable to aggression or any kind of pressure in the earlier turns.

Most foundation spells are horrendous, especially the most expensive ones. However, some of them are clearly meta-defining cards and should be taken into account before building any deck in this format.

In terms of removal spells you only need to worry about SI and PnZ mostly. 6 mana Vengeance is insanely good while vile feast represents an amazing defensive tool against aggro decks (discard or spiders). As for PnZ, Thermogenic beam and Mystic Shot have always been some of the best removal tools in the game.

4 mana will of Ionia, while it’s not removal per se, it can still heavily slow down the opponent’s game plan. Using it on Hecarim or Anivia can be quite literally game-winning because of the tempo loss, the opponent has to deal with.

Culling strike and Single Combat also see lots of play in Noxus and Demacia respectively. Even though you don’t need to change your deck build around them, they’re still great spells the opponent can use in-game to deal with your threats.

As for protection spells, apart from Twin Disciplines and Deny, the foundation set’s card pool is completely void of good buff spells which is understandable.

Now that we’ve covered champions and spells, it’s time for followers. Expensive units (5+ cost) were always rather weak in LoR, especially during the early sets. However, I feel like each region has exactly 1 competitive finisher.

Noxus Has Captain Farron which is in my opinion the best finisher in this mode after its rework.

Cithria The Bold is without a doubt Demacia’s best late-game threat and it’s a huge one, especially with a full board. Ionia’s recently buffed Windfarer Hatching is an amazing finisher for the elusive archetype.

Frejlord’s finisher isn’t as strong as the ones I mentioned above but Alpha Wildclaw is still a really amazingly statted 6-cost Overwhelm that can put huge amounts of pressure on the opponent.

PnZ Unfortunately doesn’t have access to any good follower to finish the game, Corina Veraza could be considered one but I believe that the deckbuilding cost isn’t worth its effect.

Now that you guys know what to expect from the meta and what to try to counter I’m sure you’ll get your 7 wins easily!

I hope you guys liked this article, my DMS are always open if anyone wants to discuss what’s written in this article or anything LoR related!

Thanks for reading! For more LoR articles and guides, click here.